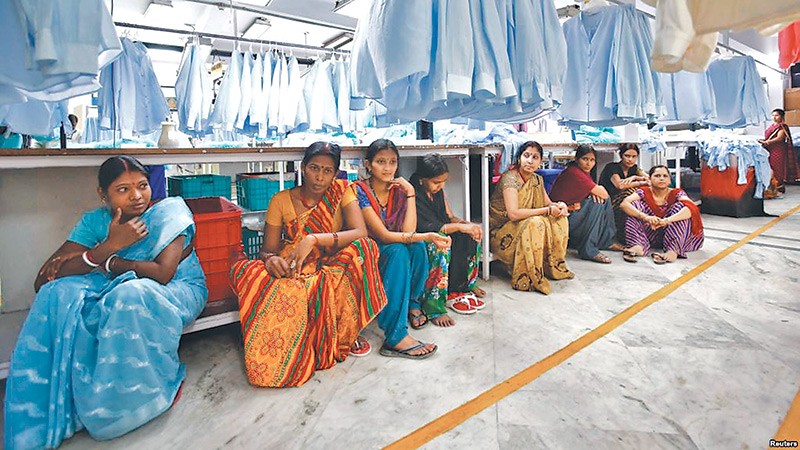 Employees sit during their lunch time inside a textile mill in India. Photo: Reuters

A Thomson Reuters Foundation investigative report has exposed garment factories’ practice of offering pain killers to women workers who are menstruating. These pills, ostensibly given to relieve menstrual pain, are administered by non-medical staff without any prescription from doctors. There is also little care about dosage.

Many women who have used these pills have reported long-term adverse health consequences. While some have avoided taking them, many others have been forced to use these pills in order to complete work targets.

Women workers reasoned that given the lack of toilets, toilet breaks or easing of work and targets, they cannot afford to take care of their health during their periods. The pills become an easy palliative to enduring cramps, which invariably reduce output.

Activists and unions working with these workers have also documented the abysmal conditions in these factories that deny women adequate hygiene.

This investigative report has exposed the blatant illegal actions of some of the garment factory managers, who put workers’ safety at risk. It has also prompted the state authorities to take cognisance of this issue and investigate it formally. While industry associations have claimed ignorance and maintained that they discourage such practices among their affiliates, it is clear that in an environment of extreme competition and global market pressures, factories are trying to squeeze every ounce of productivity from the workers.

Commercial sex workers in Pune’s red-light district have protested the misuse of the Immoral Trafficking Prevention Act following alleged harassment and intimidation by the police in the name of checking documents.

The Immoral Trafficking Prevention Act had been passed recently and at the time, sex workers had pointed out that it might lead to harassment of recognised sex workers.

In Pune, they have alleged that frequent raids and threats of arrests on those who are unable to provide identity proof has forced sex workers into insecure locations. They claim that the lack of residence proof hinders them from obtaining identity documents like Aadhaar or ration cards.

How the revival of Lambadi embroidery is curbing labour migration

In Dharmapuri district in Tamil Nadu, the Tribal Health Initiative has been working with the Lambadi tribal community to revive their traditional embroidery craft. Tribal Health Initiative is a hospital that works in the community. According to Village Square, the women who do this work earn around Rs 5,000 a month through a collective called Porgai. The work allows them to work from home and set their hours to some extent instead of working as labour in garment hubs like Tiruppur where exploitation is rampant.

Seven workers, including four sanitation workers, died inside the sewage tank of a hotel in Dabhoi, Gujarat. The other three were hotel staff. While the police have registered a case of culpable homicide (not amounting to murder), it is not evident if charges under the abolition of manual scavenging Act have also been appended.

It is not clear why the death of workers when engaging in manual scavenging should be considered as an accident when it is well established that entering sewage tanks without adequate apparatus will be fatal. This incident, while tragic, has become common place in India, with independent surveys estimating that over seven lakh people are employed in this dangerous and inhuman job. With such high prevalence, even after many legislative attempts to abolish this work, it is not surprising that many die every year in sewer tanks.

Three workers were killed and as many critically injured after a boiler exploded at Balaji Chemicals Factory in the Bobbili Industrial Centre, 60 km from Vizianagaram, last Friday. Three more have been admitted to hospital after suffering severe injuries. An inquiry has been ordered by the district administration.

Labourers employed by Archaeological Survey of India not paid in Karnataka

Newsclick reports that labourers working for ASI in Hampi have not been paid their wages for many months together. On further investigation, workers have alleged that one of the workers committed suicide after wages were delayed for a long time.

Also read | What Work Choices Are Indian Women Making and Why?

“There is no other alternative employment in the drought struck region,” said one of the labourers interviewed. It is also alleged that while the minimum wages is Rs 550 a day that amounts to Rs 16,000 per month, they are paid about Rs 3,000 a month. The labourers employed by ASI have been protesting for two years now and asking for their employment to be made permanent.

After the sanitation contractor of Ambedkar University was fired, the sanitation workers found themselves without jobs for no fault of their own. They were not even informed or given notice but discovered they had no jobs one day.

The workers’ union pointed to the recent Delhi government notification which required government departments to retain 80% of the workers even if a contractor is changed. The union argued that Ambedkar University counts as a department of the government. It’s not yet clear whether this argument will succeed. The workers met Delhi labour minister Gopal Rai,  who has announced a visit to the university.

The initial strike in West Bengal had started after a doctor was assaulted by relatives of a patient who died. Now Mamata Bannerjee has met the striking doctors and after that meeting, the strike has been called off, but it’s unclear what measures the Bengal government will be taking.

Government reduces ESI contribution to 4% of wage from 6.5%

The Central government has notified a reduction in contribution of employers and employees into the Employees State Insurance scheme. The ESI scheme offers workers free healthcare and various other benefits, including wage compensation to all workers earning below Rs 21,000 a month.

After a tip off, 26 child workers were rescued from a factory in Amasivni area near Raipur. The children were aged from 13 to 17 and were working 12 hours a day and paid Rs 5,000-7,000 a month. District child protection officer Navneet Swarnkar told PTI, “As part of the campaign, a total of 51 child labourers were rescued in the last six days in the district.”

A general strike in Sudan has been on the receiving end of extreme state violence. The Sudanese Professionals Association has stated that more than 100 people have been killed since the strike was announced on June 3.

According to PBS, “The protesters hope that their strike and campaign of civil disobedience will force the military to hand over power to civilians.” The strike has been successful in a way – cities are almost empty according to one activist. The internet has been cut off in areas and troops are amassing. The government-run news agency has been given very different reports from international news agencies and humanitarian organisations.