The Life of Labour: Focus on Child Labour After Death of Minors in Delhi Fire, HAL Signs Wage Pact 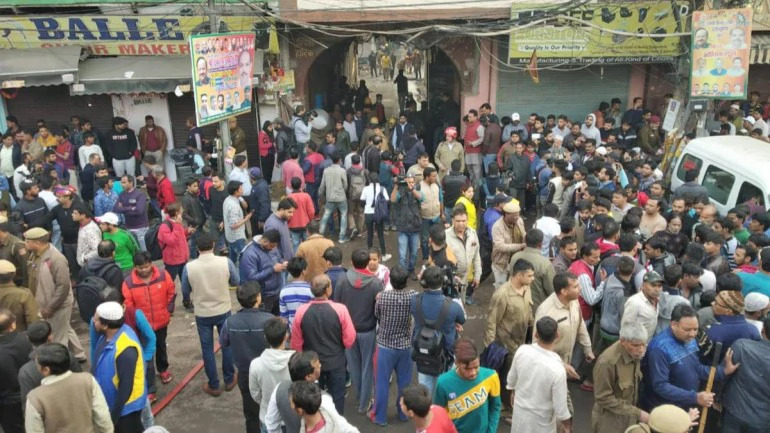 Rescue officials, locals and family members of those trapped gather at the Anaj Mandi area after the fire. Photo: PTI

A massive fire at a four-story factory building in the Anaj Mandi area of North Delhi claimed at least 43 lives and injured over 20 other workers on December 8.

Among the dead were mostly young workers and at least five minors. Trade unions hit the streets soon after, demanding better implementation of labour laws and safety regulations. Workers and activists marched to the office of the Delhi labour commissioner under the banner of Mazdoor Adhikar Sangharsh Abhiyan on Tuesday morning.

The All India Central Council of Trade Unions (AICCTU) continued the protest by marching to the Delhi chief minister’s residence the next morning. In the evening, 11 central trade unions organised a condolence meeting at the site of the accident.

The demands of all these groups are similar – they accuse the government and labour department officials of corruption and demand strict action against those responsible for ensuring compliance with laws and regulations. They have also demanded a compensation of Rs 50 lakhs each for the families of the deceased and Rs 20 lakhs each and free medical care for those who were injured.

The AICCTU has accused the labour minister Gopal Rai of dereliction of duty and demanded his resignation and also called for setting up of a team consisting of labour law experts, academicians, concerned government officials and trade unions “to survey the factories or industrial areas and point out the deficiencies/lapses in factories and other establishments”.

The unions have also demanded complete and effective ban on child labour. The Delhi high court has issued notices to the Centre, Delhi and Bihar governments and the Delhi police and sought their response on a PIL filed by the NGO Bachpan Bachao Andolan seeking enquiry into alleged child labour. The NGO also claims that over 90% of children rescued by them from situations involving child labour in Delhi are illegal factory units like the one in Anaj Mandi.

Hindustan Aeronautics Ltd (HAL) signed a wage revision pact with its employees’ union on December 10 at its corporate headquarters in Bengaluru, almost two months after its employees went on strike at nine locations across the country from October 14 to 24. HAL petitioned the Karnataka high court on October 17 to intervene and the workers returned to work after the court order. 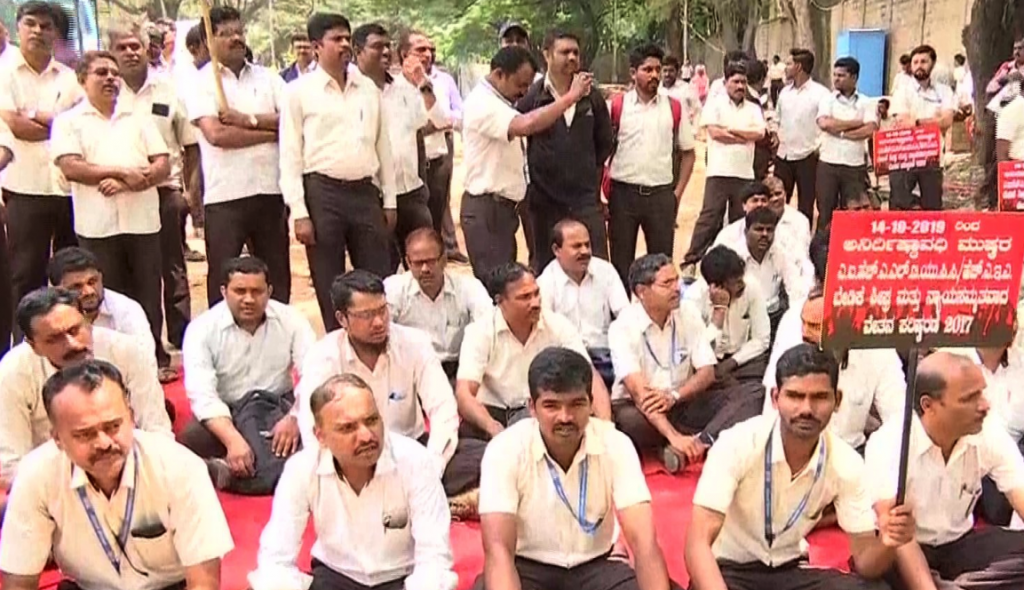 “The management and the trade unions of the workforce signed an agreement on wage revision hike on Tuesday here, which will be retrospectively effective since January 1, 2017,” the company said in a statement to news agency IANS.

The unions were demanding a 35% hike in gross salary, the same as was given to the company’s executives, and 15% fitment benefits.

“The agreement has offered fitment benefit at 12%, perks and allowances under the cafeteria system at 25% for workmen in scale 1-10 and at 22% for workmen in special scale) of the revised basic pay besides other unspecified benefits,” IANS reported. The previous revisions were done in 2007 and 2012.

Code on Social Security introduced in the Lok Sabha

Following the Union cabinet’s approval of the Code on Social Security, 2019 last week, labour minister Santosh Kumar Gangwar introduced it in the Lok Sabha on Wednesday.

The Bill seeks to universalise social security benefits for around 50 crore workers in various sectors throughout the country. The Bill also aims to provide payment of gratuity to workers hired on Fixed Term Employment contract on a pro rata basis even if the contract is for less than five years.

A labourer drinks water as another looks on, on a hot summer day at a grain market in Chandigarh, India April 19, 2016. Photo: Reuters/Ajay Verma

“The Bill proposes setting up a social security fund using corpus available under corporate social responsibility. This fund will provide welfare benefits such as pension, medical cover, and death and disablement benefits to all workers, including gig workers,” Economic Times reported.

This labour code is the first labour legislation in India to mention gig economy and platform workers. It also provides benefits to plantation workers. The bill gives employees the option to reduce their Provident Fund (PF) contribution from the current 12% to 10% if they want to increase their take home pay.

This has reportedly been done to boost consumption. However, the employer contribution has also been reduced to 10% of basic pay. The bill makes Aadhaar mandatory for all social security benefits. It also has a provision for compensation to workers in case of accidents while commuting from residence to place of work and vice versa.

Central trade unions are yet to release an official statement responding to the latest bill but are skeptical of the government’s intent as the previous drafts of the bill fell short of their expectations. The RSS-linked trade union BMS had also criticised the fourth draft of the bill. Ten other central trade unions had stopped attending consultation meetings while the bill was being drafted alleging that their suggestions were being overlooked.

Hundreds of nurses marched from Gandhi Smriti to Delhi Secretariat in the capital on December 10 demanding implementation of the SC recommendation on minimum wages for nurses. Delhi has around 84,000 registered nurses, most of them women. They have been forced to take to the streets as private hospitals still pay them less than half of what nurses get in government hospitals. Nurses also sat on a “satyagraha” at Jantar Mantar for over a month before the march.

The Supreme Court, in 2016, had formed an expert committee and made recommendations on wages and working conditions saying that hospitals with more than 200 beds should pay nurses the same salary as government hospitals and those with less than 50 beds a minimum of Rs 20,000 for new recruits. 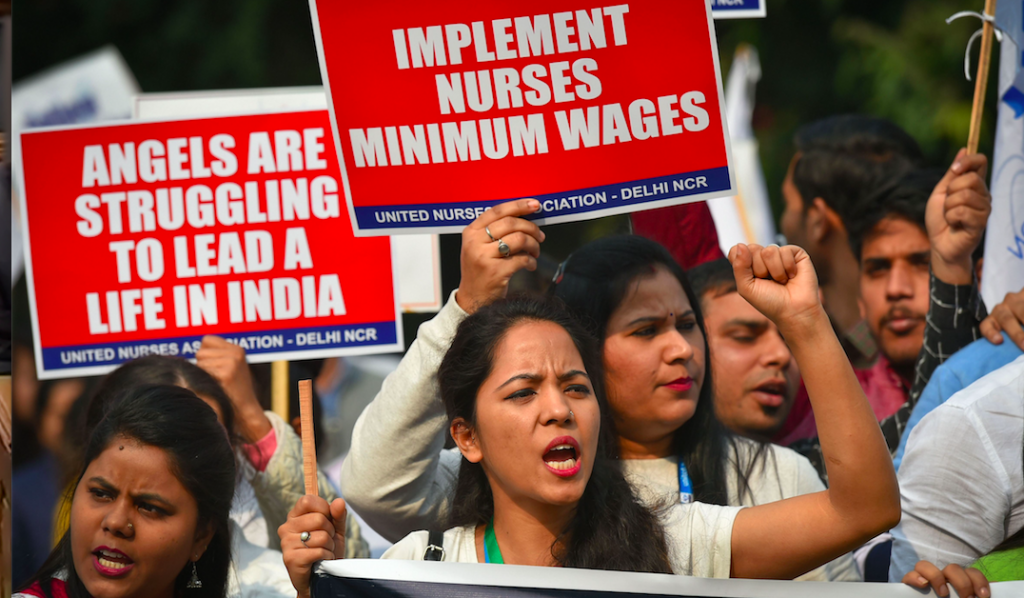 Members of United Nurses Association raise slogans during their march from Rajghat to Delhi Secretariat to press for implementation of Minimum Wages Act for nurses, in New Delhi. Photo: PTI

“In its order, the apex court had said, “We feel that the nurses who are working in private hospitals and nursing homes are not being treated fairly in the matter of their service conditions and pay.” It left it to the committee to look into the specifics,” a Times of India report says.

The recommendation was made on January 29, 2016. More than three years later, the Delhi high court has also directed the AAP government in Delhi to implement the SC recommendations in private hospitals. The HC order came on July 24, 2019 but the nurses claim the Kejriwal government is yet to take action in this regard.

“On July 16, 2018, Arvind Kejriwal promised thousands of nurses who had gathered at his residence that his government would do the best to implement the SC recommendation in Delhi’s private hospitals. Even after the court order, he is not even ready to meet the nurses. He also said that his government will not do any back-door setting with corporate hospitals, but now we doubt that he has done the same,” Rince Joseph, president of United Nurses Association, told The Wire.

France erupts in protests against proposed changes to pension system

France is currently witnessing one its biggest strikes in decades over proposed changes to the public pension system. The country has 42 different pension plans across various professions and regions, and president Emmanuel Macron seeks to convert it into a single points based system.

The general retirement age in France is 62 years but these different pension systems allow some workers to retire before this age with full pension.

More than 1,80,000 people have taken to the streets in around 30 regions of the country in over 200 protest demonstrations. Transport services and schools have come to a halt. You can read in detail about why the workers are protesting here. The protests are set to become more intense as Macron has refused to blink and has raised the retirement age to 64.

What to Know About Your Rights to Unionize

Why Basic Income Failed in Finland

Bullshit jobs and the yoke of managerial feudalism

Why India is staring at a middle-income trap

Forced to Love the Grind

The white working class is a political fiction