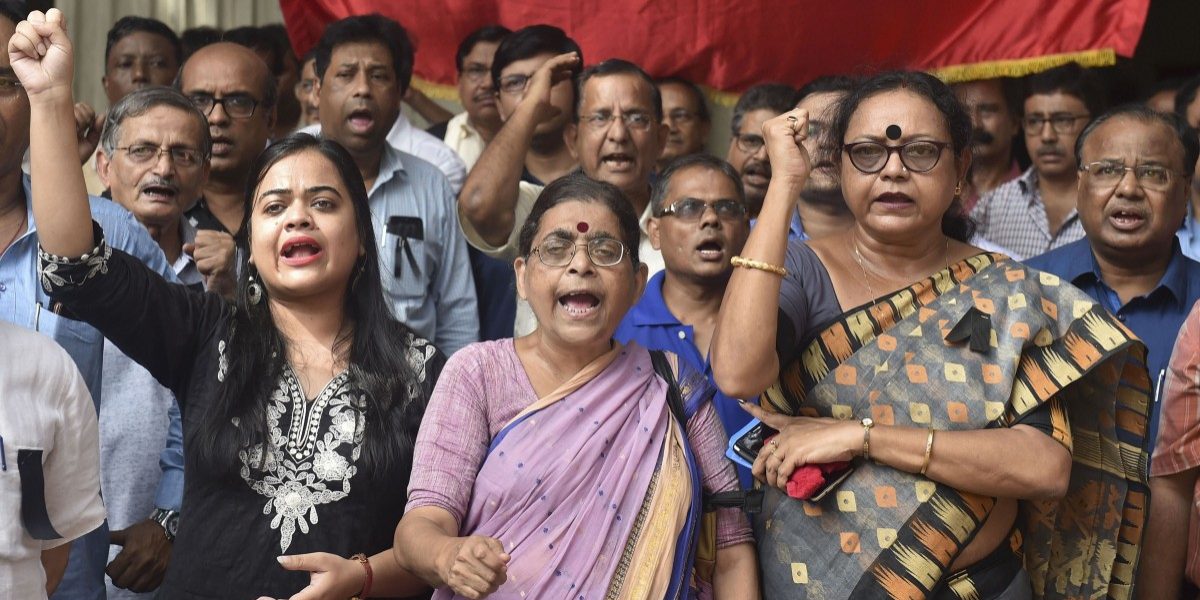 File image of bank employees raising slogans against the Central government to protest against the merging of different banks, in Kolkata on August 31, 2019. Photo: PTI/Swapan Mahapatra

An indefinite protest started by the employees of Muthoot Finance Limited in Kerala has entered its 15th day. The Centre of Indian Trade Unions-affiliated Non-Banking and Private Finance Employees Association (NPFEA) has led the protest of 220-odd employees since August 20. The strike has affected operations at 300 out of 611 branches of the firm in the state, Indian Express reported.

According to The News Minute, the protest is, “against the management regarding several issues such as a basic hike in salary, lack of proper allowances, denial of proper bonus among many other issues”. Express reported that Muthoot Finance’s refusal to acknowledge the employees’ union NPFEA, formed four years ago, is at the heart of the strike.

“Imagine a company which is earning more than Rs 2,000 crore profit, not being able to pay a decent salary to their employees,” Sholitha, a manager of the financial corporation’s Pothencode branch in Thiruvananthapuram, told TNM.

The protests have been labelled ‘politically motivated’ by some as CITU is the trade union wing of the CPI(M) which is in power in the state. However, protesting employees have denied the charge and claimed it has been organised by the workers themselves, who have only found support from CITU.

In response to the strike, the company has threatened to close the branches where operations have been hit and retrench workers.

In a letter to the AAI chairman, the forum has threatened to resort to agitation this month by holding lunch-hour demonstrations and wearing black badges.

The employees have termed the move “arbitrary and unilateral” as they claim their concerns were not taken into account before the “hasty” decision was taken. This, they say, has raised concerns among the stakeholders about the future of employees and the impact of privatisation on users and services provided to them.

Further feeding the anxieties of the forum, former AAI chairman Guruprasad Mohapatra, while leaving office on July 31 had said that the government had plans to exit from 20-25 more airports in the next phase of privatisation.

“We sincerely hope that a sympathetic consideration of the concerns of employees will be taken care of by your good self and (the) government/AAI and (you) will convene a meeting of the forum to discuss the concerns in details and restrain from indulging in privatisation or leasing of any other airports of the authority,” a letter from the forum to the AAI chairman said.

The United Forum of Bank Unions, which represents a million bank employees across the country, is planning massive protests against the government’s move to merge 10 state-run banks into four bigger banks. The forum is an umbrella body that represents four officers’ unions and five non-officers’ union. The Bharatiya Mazdoor Sangh (BMS), the labour wing of the Rashtriya Swayamsevak Sangh, has also criticised the move and offered support to the forum’s protests.

“There will be serious strikes; we are going on a massive confrontation with the government,” C.H. Venkatachalam, general secretary of the All-India Bank Employees Union (AIBEA), told BusinessLine. File image of a bank employee at work. Photo: Reuters

The All India Bank Officers’ Confederation (AIBOC), the apex body of the bank officers’ trade union movement, has expressed “outright opposition” to the move. According to a statement released by the AIBOC, the creation of four new banks by merging 10 PSBs, “will only enable them to create larger balance sheets to conceal the NPAs and absorb more losses and haircuts. This is a clear diversion of attention from the core issue of NPA recovery. It is common knowledge that mergers cannot resolve or clean up balance sheets.”

Andy Mukherjee has written in Bloomberg on how, “the benefits (of the merger) won’t be felt for years, while Modi’s government is staring at an economic crisis now”.

Newsclick hasreported that there have been several cases of employees in the information technology (IT) industry approaching labour commissioner offices in Pune over the non-payment of salaries and full-and-final (FnF) settlements.

“It is extremely challenging and stressful for employees to sustain their life without salary in metro cities like Pune or for that matter anywhere in the country,” a press statement from the Forum for IT Employees (FITE) said. FITE is a trade union that aims to safeguard the rights of IT employees in India.

The statement came after employees of SEED Infotech, a leading IT training institute, approached FITE with complaints of non-payment of dues. According to a report by Pune Mirror, over half of the employees of the company had also approached the labour commissioner and filed a complaint against the institute on August 23. The company blamed the economic slowdown for not being able pay the salaries due for a year now.

This case, as Newsclick suggests, cannot be seen in isolation but reflects the larger impact of the economic slowdown on IT firms. In addition to small and mid-sized IT companies, there have been layoffs by some IT giants while others are bracing for another round.

Human Rights Watch has reported on the Sindh Women Agriculture Workers Act 2019 which has recently been approved by the Sindh cabinet and is expected to pass in the assembly, calling it “an important step toward ending abuse and discrimination against women agricultural workers.”

This is the first time that Pakistan will recognise the right of women agricultural workers to unionise.

“A woman worker shall receive a written contract of employment if she so demands. The new law also gives women rights to collective bargaining, social welfare, including child health, community development, economic profit and for accessing publicly supplied goods and services,” Dawn reported.

“As workers returned to the factory after Eid vacation on 18 August, SF Denim Apparels cited ‘work order shortage’ and announced one of the largest terminations in Bangladeshi garment factories in recent times,” IndustriALL reported.

The Bangladesh Garment Manufacturers and Exporters Association has defended the company, which is one of its supplier factory members, saying they have been “suffering for the last six months” and have had “serious issues with lack of orders”.

When jobs plummet, so will growth

All you want to know about Employees’ Pension Scheme