Generation after generation of sugarcane harvesters have been caught in a vicious cycle of debt and deplorable working conditions. 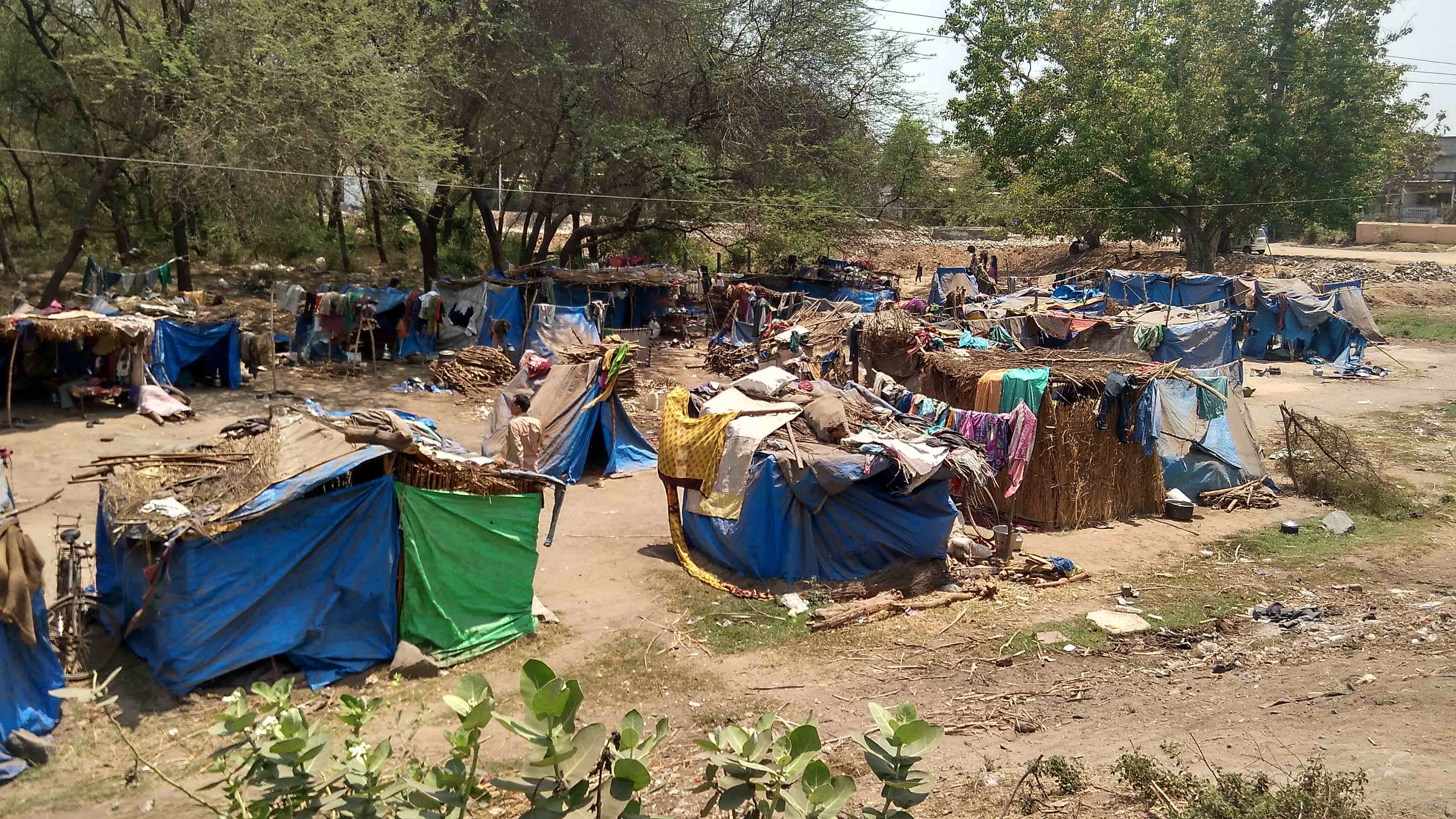 Makeshift houses made by the sugarcane harvesters, out of plastic sheets provided by the factories. Credit: PCLRA 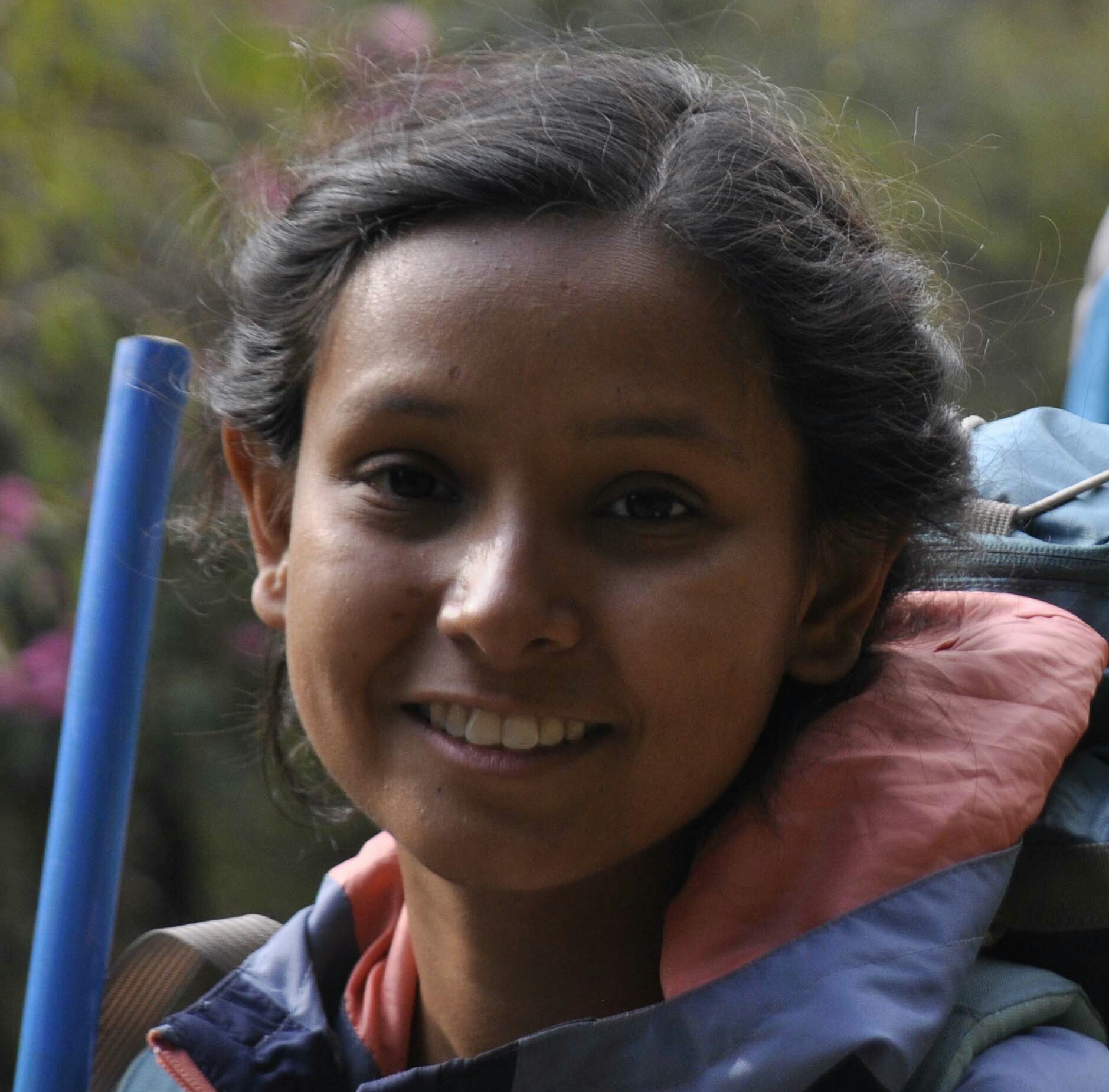 Thirty-year-old Raghu Thakre, from Maharashtra’s Nandurbar district, migrates every year with his family to the sugarcane farms of south Gujarat, where they work as agricultural labourers for six to eight months. He has been doing this for the last 15 years, ever since he had to drop out of school and join his parents and siblings at work on the sugarcane fields. He said that he inherited this work (and the fate of a sugarcane harvester) from his father, and his father inherited this occupation from his grandfather. He knows, he added with a distant look on his face, that his children too will be condemned to a life of sugarcane harvesting, ensuring the continuity of a vicious cycle.

There are between 1.5 and two lakh people who share a similar story. Hundreds and thousands from the Adivasi belts of Gujarat and Maharashtra migrate to parts of southern Gujarat to work in the sugarcane fields. For months they live on the outskirts of villages of sugarcane field owners (most of whom are Patidars), along with their children, devoid of basic amenities such as clean water, sanitation and medical facilities. As adults toil for 12 to 14 hours a day, the children engage in unpaid care labour – cooking, cleaning and caring for their siblings. For all the months that they stay with their parents, these children remain out of school and and are beyond the coverage of welfare schemes. 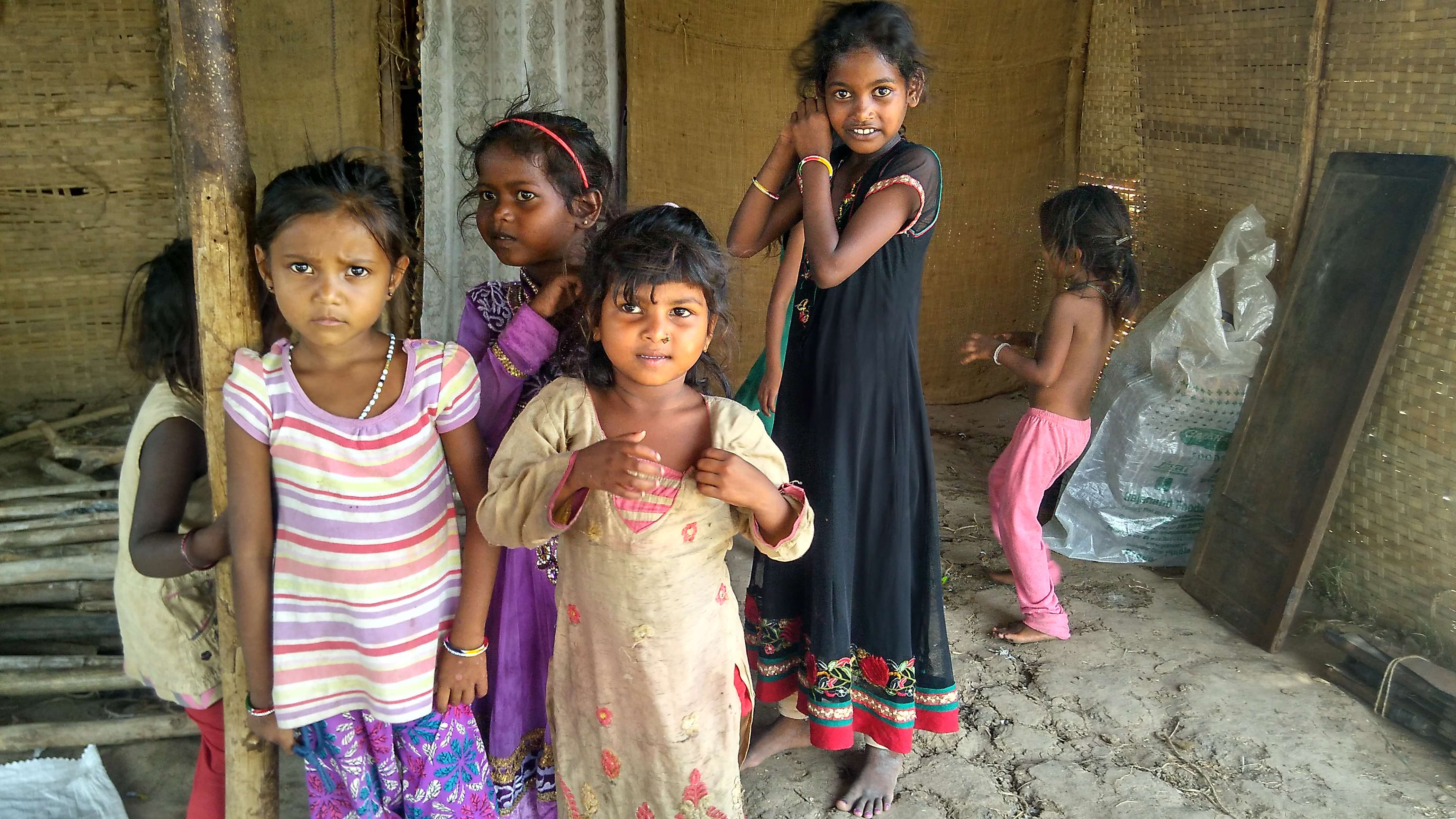 Children who migrate seasonally with their parents often find themselves out of school. Credit: PCLRA

The sugar industry is centred around the town of Bardoli (Surat), which hosts Asia’s largest sugarcane crushing factory and is home to a big cooperative society of farmers. The cooperative has been working for decades to support the interests of sugarcane farm owners. However, there have been no efforts to ensure the rights and well being of the sugarcane harvesters, who fuel the progress of these sugar factories and have contributed to making India the second largest producer of sugar in the world, after Brazil.

Recent empirical studies conducted by Prayas, through its Center for Labor Research and Action (PCLRA) have found that while the expansion of sugarcane fields and sugar mills on a cooperative basis has become a replica for agro-industrial development in and around Gujarat, the harvesters remain highly oppressed and exploited. On comparing the findings of a recent PCLRA report with Jan Breman’s seminal work on the workers in sugarcane fields in 1978, one finds that the condition of the worker has only worsened over the years.

When Breman conducted his study, wages were being settled every fortnightly and an advance was paid to the workers by both contractors and the factory management. However, the financial burden seems to have shifted over the years. Wages now are settled at the end of the harvesting season, and mukaddams or labour contractors are now solely responsible for arranging the advance money. Further, no separate payments are made for the extra labour performed, such as loading harvested cane into trucks, unlike in Breman’s study, where separate wages were paid for additional labour performed. 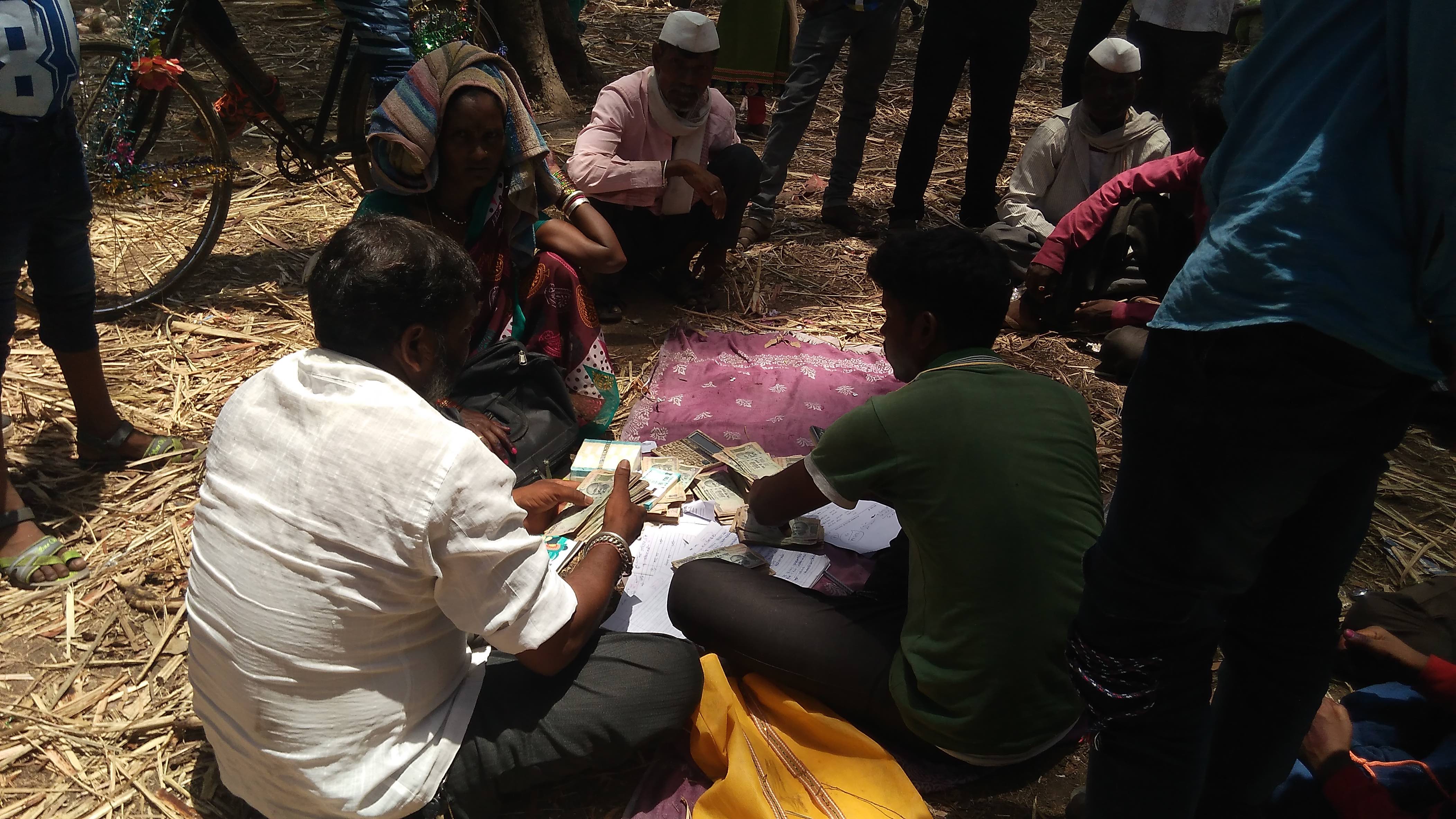 A mukkadam settling accounts with his team of harvesters. Credit: PCLRA

For decades, the sugar mills have been sending lorries to bring in a vast army of seasonal, Adivasi migrant workers to harvest the sugarcane fields – a process that can last up to seven or eight months. Mukaddams become essential interlocutors, by mobilising the work force and also managing the everyday issues that the workers face. The factory supervisors contact mukaddams (former harvesters themselves) with their demand for workers. Mukaddams then recruit workers from their own or neighbouring village and talukas – to form a team of 15-20 koytas (a pair of workers). An advance amount is paid by the mukaddam to the workers (Rs 14,415, as per the estimates of the 2016-17 PCLRA study). Mukaddams are responsible for arranging the advance money – sourced either through his/her own pool of savings or borrowed from sahukars and factory supervisors. The advance amount is to be repaid by the workers at the end of the season, at 1.5 times the principal amount.

Agricultural minimum wages in Gujarat are the second lowest in nation, after Madhya Pradesh. Wages for sugarcane harvesters are Rs 238 per metric tonne (MT); this piece rate minimum wage was declared specifically for sugarcane harvesters after an earlier civil society movement for higher wages and legislation in court. Since a koyta unit comprises two workers who harvest an average of one MT sugarcane per day, the average daily wage turns out to be Rs 119 per day per worker. This is significantly less than the statutory daily minimum wage for agriculture in Gujarat, which is Rs 178 per day. It also needs to be noted that the workers work between 12 and 14 hours per day to earn this wage.

With abysmally low wages and exorbitant interest rates on the advance, the report elaborates on how the workers are often left with negative balances by the end of the season. Wages are received after deductions have been made for provisions (food and plastic sheets) by the factory and credit at the local kirana store – often owned by the mukaddams themselves – and the advance amount is repaid at one and a half times. The worker usually ends up taking a loan for the months spent back in the village of origin. 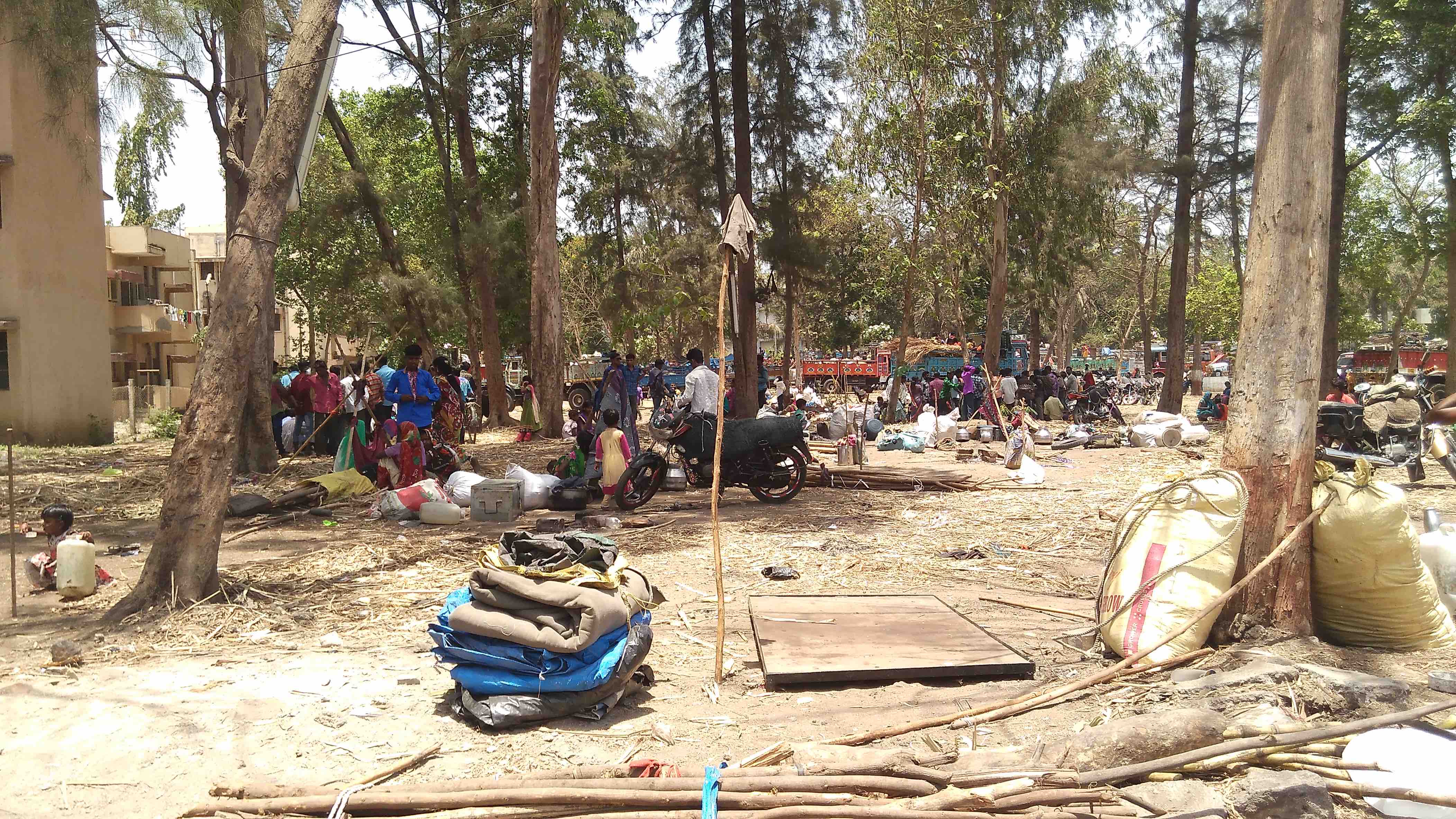 Workers await their wages at the end of the season at the Gandevi sugar factory. Credit: PCLRA

It is assumed that the biggest cause of migration is the lack of cultivable land for agrarian communities. Empirical evidence reflects that landlessness or a lack of sufficient cultivable land indeed contributes to the need to migrate. Seventy-five percent of the total work force is landless, while 20% of them are marginal land holders. More than 80% of workers are within the age interval of 21-45 years. This section of population, most of whom are Adivasis, remain outside the purview of state welfare schemes and are subject to deplorable economic conditions due to the very nature of migration and the industry itself. Children migrate with their parents, thus dropping out of school, and are often destined to the same life as their parents.

One is provoked to think about what makes this army of migrant workers return to the fields year after year. Why have they not opted for other kinds of unskilled or semi-skilled labour? What drives their choice to remain in a sector that inherently works to keep them in a state of never-ending deprivation? Even after years of documentation by researchers and scholars about the condition of sugarcane harvesters, why have there been no efforts to work towards improving their state – economically as well as socially? These are a few among the many questions that come up when one travels through parts of Surat and other districts of southern Gujarat, where sugarcane fields stretch across the horizon.

From the time when Breman conducted and published his pioneering work in 1978, the situation and conditions of the workers have not changed. Rather, he rightly compares the condition of workers to that of bonded labour or neo-slavery, which continues to thrive even today. Is there a life for them beyond this bondage or are they condemned to the bitter life of a sugarcane harvester?

Anushka Rose is Coordinator for Research and Documentation at the Prayas Center for Labor Research and Action. The article draws upon the report ‘A Bitter Harvest: A study of sugarcane harvesting workers of South Gujarat’ published by Prayas in partnership with Rosa Luxemburg Stiftung, released on April 27, 2018.