At least nine such deaths have occurred in Delhi in the past 45 days. 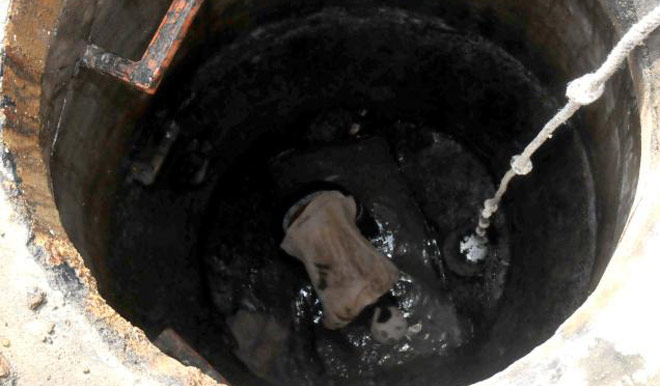 New Delhi: A sanitation worker died while two others took ill after they inhaled poisonous gas while cleaning a sewer at a city government-run hospital in central Delhi on Sunday, August 20, NDTV reported.

The death of 40-year-old Rishi Pal – who only had on a vest, underwear and a pair of rubber slippers – is hardly the first such incident amid sanitation workers being made to clean sewers without any protective gear.

At least nine such deaths have occurred in Delhi in the past 45 days.

According to a Hindustan Times report, Pal and his co-workers did not have on any safety gear or even a ladder to climb down the manhole of the sewer line at Lok Nayak Hospital. They had made use of a rope instead.

Pal’s family claimed that he was never provided any safety gear when undertaking the hazardous job. “My son risked his life every time he went down those dirty sewers,” his mother Sheela Devi said. “Who should we blame? No amount of compensation will bring my son back.”

Pal was hired by a private contractor, who, according to Pal’s colleagues, fled the scene after hearing of his death.

The mounting deaths reflect the unsafe conditions sanitation worker in the country are made to work in. According to a Hindustan Times report, often the workers light matchsticks at the mouth of a sewer to determine the presence of poisonous gases and an absence of oxygen, entering the sewer hole if the stick burns itself out.

On August 12, two brothers died of suffocation while cleaning a septic pit at a shopping mall in East Delhi’s Anand Vihar, and just six days before that, three had died after inhaling toxic gases while they were cleaning a sewer in Lajpat Nagar. Four others died on July 15 after they entered a water harvesting tank in Ghitorni.

The police alleged that in all three cases, the workers were not provided safety gear, a clear violation of the Prohibition of Employment as Manual Scavengers and their Rehabilitation Act, 2013.

Section 7 of the Act states that: “No person, local authority or any agency shall… engage or employ, either directly or indirectly, any person for hazardous cleaning of a sewer or a septic tank.”

Even though manual scavenging was banned in 1993, over 80 people have died in the drains and manholes of Delhi alone since 1994.

Satyendra Jain, Delhi minister for health and PWD, has sought a detailed report on the most recent incident and assured action.

The Delhi government is in the process of establishing district level vigilance committees to prevent more deaths, and has called for an emergency meeting for August 21 to discuss the issue.