Republic of #Grit: The Lives of Two Sanitation Workers in Uttar Pradesh

“What’s the worse that can happen? We will die. But that’s not so bad for someone who goes down to hell, every single day.” 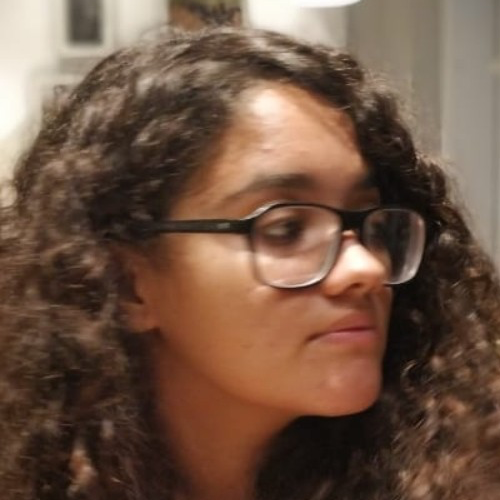 Saharanpur (Uttar Pradesh): Santosh* had always been prepared for his father’s death. Yet when the day came, the 36-year-old found himself questioning his own identity. Santosh’s father had a long battle with a respiratory disease, a professional hazard of being a sanitation worker – a job that Santosh’s father did for 50 long years until he passed away in 2015.

Around the same time, in a house located in the lane next to Santosh’s, a similar story unfolded. Another man by the name of Suresh Machal, 45, lost his father to a breathing problem. He too was a sanitation worker.

These two men have much more in common than that. Both Santosh and Suresh stepped into their fathers’ shoes, knowing that they might meet a similar fate. Having been sanitation workers for many years, their only desire now is to be able to lead a comfortable life.

However, in the small industrial town of Saharanpur, this desire may never translate into reality. Both Santosh and Suresh are aware of the odds, but the hope still lingers in the back of their minds and in their children’s eyes. In order to fulfil that dream, they work hard every day.

The day begins early for Santosh, at 5:45 am, as he cycles his way to the Star Paper Mills near his house. Employed under a private contractor for the last 11 years, his job involves cleaning open drains and sweeping the mill’s He is paid Rs 5,900 every month.

Also read: A Mizoram Town Is Showing the Way to Community-Driven Sanitation

This meagre salary, though, comes with a cost. Containing industrial waste and harmful chemicals, the smaller drains are cleaned with an axe-like tool called pavdi, while bigger drains require Santosh to get inside them with no protection other than a helmet. “They don’t provide us with masks, gloves or footwear. At times the dirt just drips down, onto our bodies,” Santosh complains, telling me about an incident where he slipped in the drain and injured his knee.

“I wasn’t even able to claim money to see a doctor,” he adds, as we sit on a charpoy at his house one winter afternoon.

Santosh holding a photograph of his parents.

His wife Manju and their 11-year-old daughter sit beside him. His elder son, 16-year-old Manish, makes a short appearance. He works as a sweeper at a restaurant. Manish’s brothers are away at work and their respective families are busy with their daily routines. 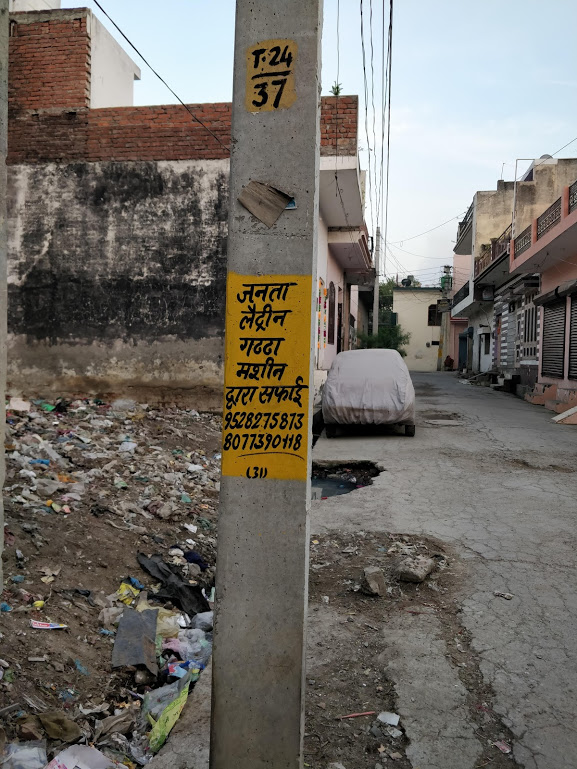 An advertisement on an electric pole in the Valmiki colony offering sanitation services such as
cleaning septic tanks, latrines and drains.

The family’s house is in the Tagore Gardens Valmiki Colony on Paper Mill Road. The colony shares a name with the caste of the people living here – the ‘Valmikis’, who have been historically marginalised and assigned the job of cleaning bathrooms, latrines and drain pipes.

This is exactly what Suresh has been doing since he was 13. Not employed by the government or a private contractor, he cleans toilets, bathrooms and private naalis in households, and is paid Rs 50 each time he going to a house.

“I was born into this caste, but times have changed. Had I been educated, I wouldn’t have to do this,” he states. His job, which he calls ‘unpleasant’, requires him to be in filth almost every day. “The worst is when I am asked to clean septic tanks. The stench is unbearable, so I usually need to have some alcohol. I never refuse the work as it pays more,” he says, adding that even then, he hasn’t been offered any protective gear.

This apathy is perhaps why Uttar Pradesh continues to see a rise in the deaths of sanitation workers. Just a few months ago, there were reports of three men dying after inhaling poisonous gases while cleaning a sewer. “Nobody cares. Even I don’t. I can’t afford to,” Suresh adds.

But while this protective gear, if ever made available, may shield sanitation workers from harmful substances, there is hardly any protection for them to combat rampant casteism. “Some houses have separate cups and glasses for us,” recounts Poonam, Suresh’s wife, as she chuckles at the irony of being a ‘bartan wali (utensil washer)’ at those same houses.

“Sometimes my father is not even allowed inside the houses where he cleans the drains,” says Arzoo, Suresh’s 17-year-old daughter. “But at least there is no untouchability now. It’s much better,” Suresh adds. 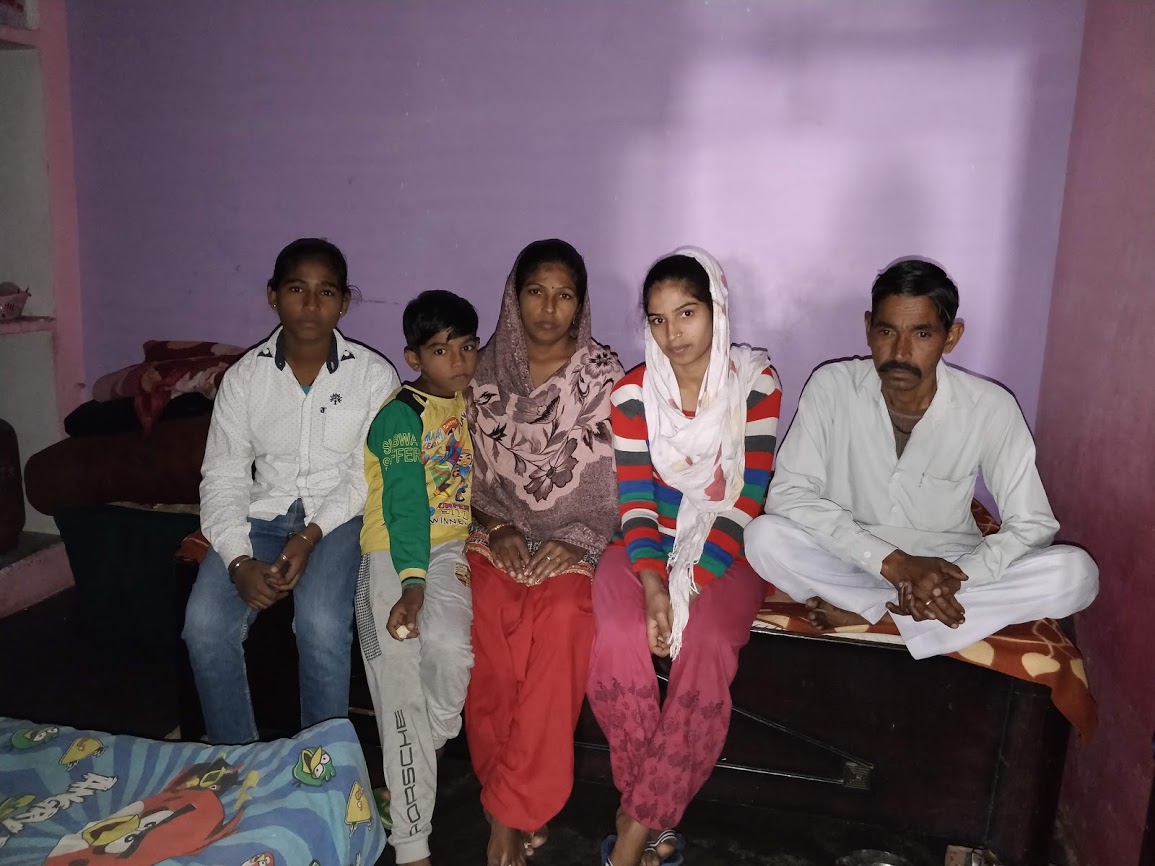 Suresh and his family in their one-room house, which belongs to his brother.

Santosh, who is only slightly acquainted with Suresh, agrees. He tells me how his contractor has had tea from the same cup as he has and has never made any casteist slurs. But he also agrees that society has internalised casteism in Uttar Pradesh, to the point that he finds his contractor almost extraordinary.

According to a report in the Economic and Political Weekly, “in a survey, conducted by Social Attitudes Research India in 2016, 42% of Non-Dalit Hindu men in urban Uttar Pradesh reported that someone in their family practices untouchability”. According to another Amnesty International London report, caste-based hate violence was found to be most rampant in Uttar Pradesh. Just last year, Saharanpur witnessed deadly violence between Thakurs and Dalits.

“These days a lot of upper caste people do not mind being sanitation workers, which means more competition for us. Moreover, I have even seen cases where an upper caste man will have the government job and reap all the benefits, but will make one of us do the actual work at nominal pay,” Suresh reveals. 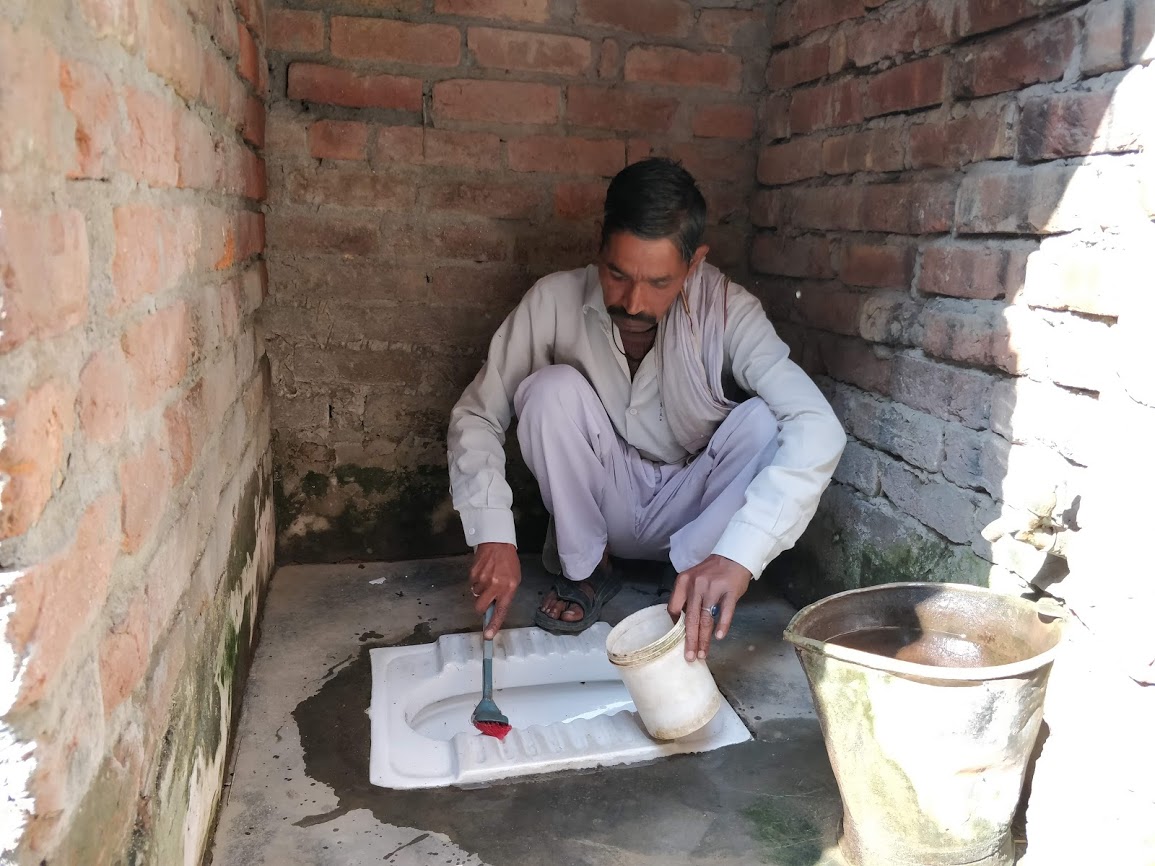 Suresh sometimes cleans latrines to earn extra money, though he hates the work.

Being a government employee is something even Santosh aspires for, considering his own father was one. “The salary is great. There are designated holidays, ESI, PF, pensions, benefits. I could have easily taken my father’s place when he passed away. But when I applied, they asked for Rs 70,000. Where will I get this much money?” Santosh asks.

His experience was similar to quite a few sanitation workers living in the vicinity. While some arranged the money, many resorted to contract and domestic work that promises no job security and lesser pay. But there’s little they can do about this – putting up a fight may put their jobs in jeopardy. “Something is better than nothing,” Santosh says.

For Santosh and Suresh, this ‘something’ is a total monthly household income of Rs 10,000 each, including their wives’ salaries. This is barely enough for their basic needs and loan instalments. Education remains a luxury, which Suresh manages to afford only for his 10-year-old son, Anshul, while his daughters are sent off to work with their mother.

Anshul wants to become a doctor so that he can ‘treat his father for free in his old age’. His sister, Anu, dreams of becoming a teacher, even though she has never been a student herself. Santosh’s son, who has passed Class 10, is a sweeper and wants to try out for the police. His sister, Arzoo, too wants to join the forces.

“These aspirations are what gives us the strength to do this job,” Suresh says. Poonam is desperate to leave this town and explore the country. Santosh aspires to open his own shop, a dream that he says seems ‘overambitious’ for the moment. “For now, my immediate future is to only open drains,” he laughs. Suresh and Poonam outside their home.

The government too doesn’t seem to have kept its promises to provide the sanitation workers with a better quality of life. The NSKFDC (National Safai Karamcharis Finance and Development Corporation) lists almost 15 schemes for their welfare, yet Santosh, Suresh and their neighbours claim not to have even heard of them. They appeared clueless when asked if they had sought help from labour unions or the Safai Karamchari Andolan.

However, Dr Geetaram, the Nagar Swastha Adhikari of Saharanpur, claimed that the workplaces of all workers under contractors were regularly inspected and everyone was provided with safety equipment. He also suggested that they were free to contact him or his inspectors in case of any grievances, but was unclear when asked about the proper channel to do so. The Labour Welfare Office in town, when contacted, stated that they were required to only look after the welfare of labourers employed in construction work, farmers and a few others, and the welfare of sanitation workers wasn’t a part of their duties.

As things stand, both Suresh and Santosh continue to battle the challenges that are part and parcel of being a sanitation worker in India. As Suresh says, towards the end of my interaction with him, “What’s the worse that can happen? We will die. But that’s not so bad for someone who goes down to hell, every single day.”

Devyani Nighoskar is a freelance journalist based in Mumbai who writes on travel, cultural, development and identity. You can follow her work on Instagram @runawayjojo.