In Repeat of Pattern, Protestors Arrested on Eve of Modi Visit – This Time, Varanasi

The protestors are working as daily wagers despite serving Banaras Hindu University for two or three decades. 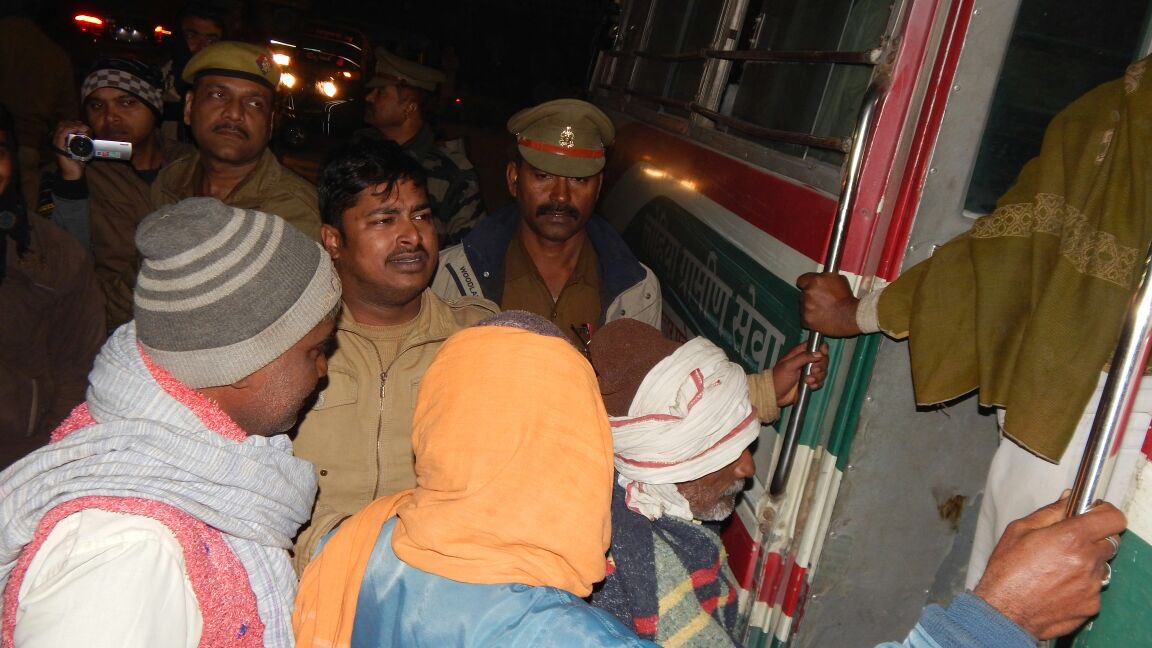 Police in Varanasi arrest BHU workers protesting the university's refusal to regularise their terms of employment despite working at BHU, in some cases, for as long a three decades. Credit: Youth4Swaraj

Varanasi: In a midnight swoop hours ahead of Prime Minister’s scheduled visit to his own constituency on Thursday, police detained 35 daily wage workers and several students of Banaras Hindu University, manhandling them to police barracks according to eyewitnesses. The daily wage workers have been on hunger strike for the past 172 days demanding permanent positions for the work they have been doing for as many as 30 years.

Among those detained was a Swaraj Abhiyan volunteer and BHU student who accompanied the workers. “Prime Minister Modi will be visitingBHU to take part in the Rashtriya Sanskriti Mahotsava, 2016, So the police were asked to clear away the workers protesting at this place,” he told The Wire.

Before he was detained, Uma Shankar, one of the protesters said, “Modiji claims that he is a tea-seller turned politician, but before his visit, the local administration has cleared aside all the tea stalls near the BHU area and they want that we should too should sacrifice our democratic rights.”

“We have been serving [BHU] for more than three decades but nobody is interested in heeding our plight. Most of us work as Class IV staff. We have worked for years to make a BHU clean and healthy place, but today it is the BHU administration which wants to sweep us away” he added.

The workers have been on relay hunger strike for 172 days. They have created a makeshift shelter out of wood and plastic. Many of the aggrieved workers have been spending their nights at this shelter, in the rain and now the biting cold. However, they are getting some support from BHU students, who often fundraise on their behalf.

Student leader Dhananjay said, “The people of Varanasi, wanted to talk with their MP but what has happened is like a pattern. Ahead of Modi’ visit to Gujarat in September, the police detained Dalit activist Jignesh Mevani, In November last year, a member of the Jammu and Kashmir legislative assembly and hundreds of separatist activists were detained by the authorities in the Kashmir Valley to make Prime Minister Modi’s rally in Srinagar a smooth affair. And again, recently, on November 27, Delhi police detained 150 students who were protesting against demonetisation.”

The workers claimed that they had approached various leaders and officials – from MHRD ministry to the PMO – but nobody was interested in resolving their issue. However, activists like Sandeep Pandey – who was himself unfairly terminated by BHU from a visiting assignment on political grounds – Teesta Setalvad and Chauthiram Yadav have taken part in their protest.

On the eve of Modi visit, crackdown at BHU. 35 fasting univ employees rounded up with Swaraj Abhiyan volunteer. https://t.co/Zh4mgpExdx

Modi is visiting his parliamentary constituency on Thursday. It will be his fifth visit during this year and the ninth since he took over as the prime minister in May 2014.

According to local BJP spokesman, Sanjay Bhardwaj, “Apart from addressing the party workers, the prime minister would also take part in the National Cultural Festival underway – the Rashtriya Sanskriti Mahotsava-2016 – on BHU campus. Modi is also expected to gift four major health centres and hospitals to the people of his constituency during his visit”

On condition of anonymity, a senior BJP leader said, “Soon, the  state has to face it’s biggest electoral battle. The prime minister’s presence will magnificently turn the game, We are hopeful that this rally will boost up ground level party workers.”

After BHU, the prime minister will visit Kabir Nagar to inspect the underground cabling and installation of heritage street lighting system under the Integrated Power Development Scheme (IDPS).

His will lay the foundation stone of the ESIC Super hospital and BRS Health Research Institute at the DLW ground and dedicate Trade Facilitation Centre and Craft Museum, apart from launching various projects of the ministry of textiles.

Modi will conclude his visit by interacting with booth level party workers.