The Life of Labour: Activists Against Using MGNREGA to Subsidise Farm Labour 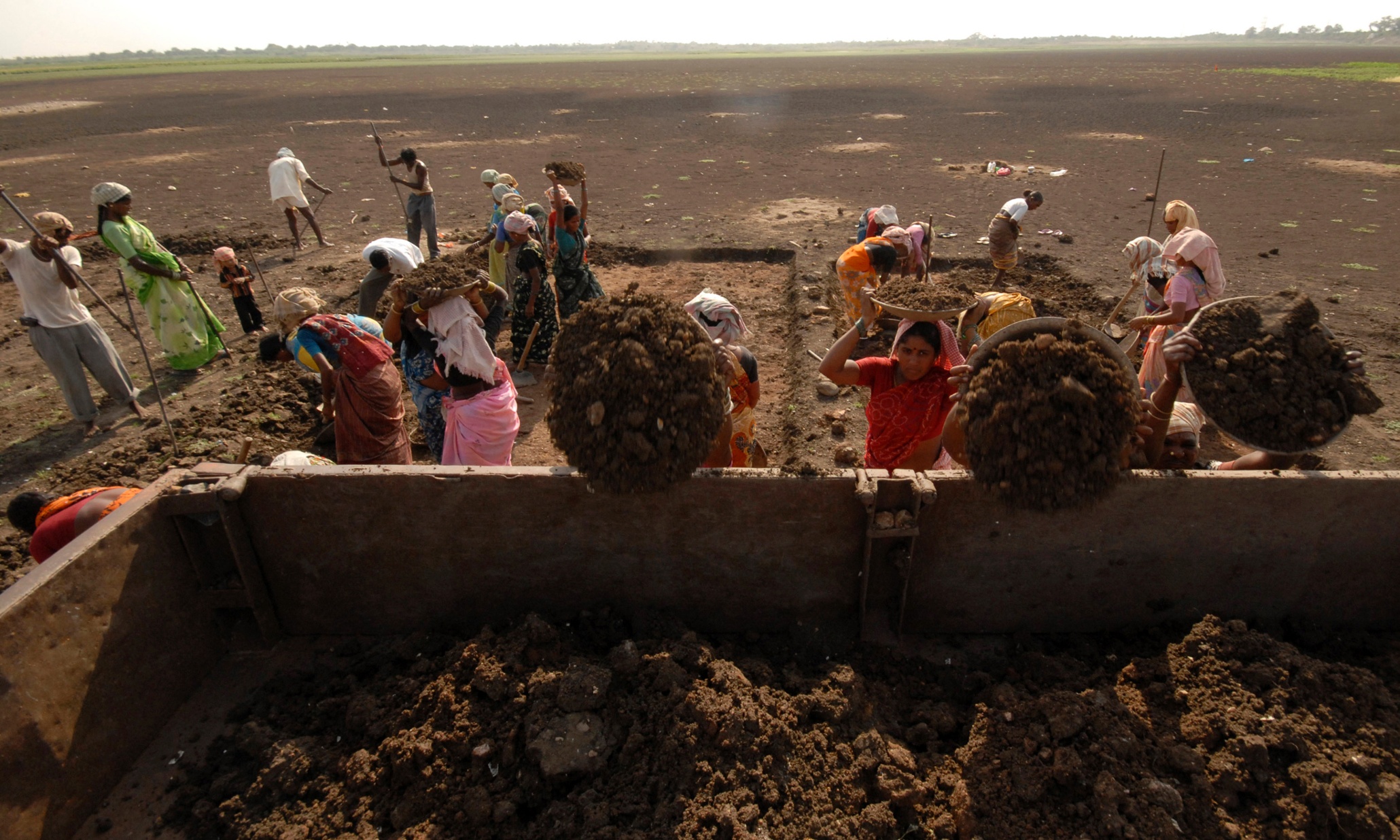 Last month, NREGA Sangharsh Morcha highlighted in a letter how 99% of MGNREGA wages have still not been paid in April 2018. Credit: Reuters/Krishnendu Halder

Workers and farmers hold a massive rally against government policies

Around 150,000 – 300,000 farmers from 26 states in India marched to Parliament Street in Delhi on September 5 to voice their displeasure with the current BJP government. Despite the rain, the protest continued. Sanket Jain, writing for PARI, said, “Shouting ‘Inquilab Zindabad’ and slogans in Bengali, Gujarati, Kannada, Malayalam, Marathi, Tamil and other languages, the protesters started leaving their tents at 9 a.m., getting drenched in the rain.”

As Newsclick reports, this is not an isolated incident. This Mazdoor Kisan Sangharsh rally has been a year in the making. It “is the culmination of an energetic campaign covering almost all districts of the country, such as meetings, processions, jail bharo on August 9, samuhik jagran on August 14.” The banners flying in the air declared support for the Centre of Indian Trade Unions (CITU), All India Kisan Sabha (AIKS) and the All India Agricultural Workers’ Union (AIAWU). Newsclick also has good video coverage of the rally.

Vijayta Lalwani from Scroll.in captures the diversity of voices joining together at this moment. Her report includes an Adivasi farmer agitating against the Forest Rights Act, a construction worker, a casual labourer who climbs electrical poles for BSNL, ASHA workers and many more. “We are exhausted,” said Romila Macwana, ASHA worker from Gujarat, speaking to Scroll.in. “We are made to work all day and we are only paid Rs. 1,000 a month for it. I don’t have time to take care of my own children. If we are paid more, then at least we become eligible to take loans.”

The list of demands including universalising the Public Distribution System, instituting minimum procurement prices, a minimum wage of Rs. 18,000, job generation and more. For a full list, refer to this article on The Wire.

Employment in India: A five-part series on caste, the farming economy and more

In the first part, Roshan Kishore from Hindustan Times shows how job generation has not kept pace with GDP. In the second part, Amit Basole and Anand Shrivastava critique the claim of 13 million jobs generated in 2017, writing that it relies on cherry-picking assumptions. Surprisingly, the third part by Manish Sabharwal of TeamLease takes a very different stance from the labour economics of the first two essays, referring to minimum wage policies as ‘regulatory fatwas’. In the fourth part, Jayati Ghosh writes about the women labourers of the economy and how the GDP and formal policy routinely forgets to include them. She writes, “First, instead of a really low work participation rate, more women work in India than men! In 2011-12, the total women’s work participation rate was as high as 86.2 per cent, compared to 79.8 per cent for men. Second, the decline over the previous decade can then be explained entirely by more women in the age group 15-24 years participating in education. Third, and most important: the decline in women’s employment rates really reflects a shift from paid to unpaid work. This is a very different picture from the conventional one that sees most women in India as “not working”.”

In the fifth and final part of the series, Sukhdeo Thorat looks at employment data and discusses how Dalits still have the highest unemployment rates in the country. A survey by the Institute of Dalit Studies indicated that caste discrimination is still strong. Of 441 farm wage labourers, about 41 per cent reported that they had been “denied work by the high castes due to caste prejudice” Similarly, a survey of 314 regular salaried workers showed that “about 18 per cent SCs reported discrimination in selection. About 22 per cent reported high caste employers giving preference to persons of their own caste in employment and about 23 per cent said high caste persons being selected with less qualification.”

Pilot social audits are to be conducted in select wards in Delhi and Rajasthan to see if they improve the implementation of benefits under the Building and Other Construction Workers Act. “We will visit construction sites as well as the areas where workers live, to check how many of them are registered with the welfare boards,” says Subhash Bhatnagar, convener of the National Campaign Committee for Central Legislation on Construction Labour (NCC-CL), which is coordinating the pilot in Delhi, told The Hindu. “Do the children of the workers all have the scholarships they are entitled to? Those who have applied for various benefits — pension, maternity — how long do they have to wait? If you only get the maternity benefit when your child is two or three years old, what is the use?”

The newly recognised Daikin Air Conditioning Mazdoor Union marched through the ‘Japanese Zone’ to their factory gates to unfurl their union’s red flag but were stopped by police allegedly on the company’s behest. When the workers still tried to march on, two leaders were arrested. A GroundXero report says that, “Only a few days back, on 29th August 2018, after over 5 years of intense struggle, termination of 40 worker leaders including the President (Rukmuddin) and General Secretary (Daulat Ram) of the present union, many police cases and other government and company repression including attacks from police and hired goons, workers of Daikin AC were granted formal registration of their independent union. This tough and exhausting struggle had been on since 2013.”

Panipat: GST effect? Hundreds of thousands laid off despite growth

A Reuters report on Panipat’s weaving industry shows the effect of GST on small businesses. One vendor told them that his monthly revenue had fallen by 75%. Many other businesses have been forced to shut down as they and their vendors could not handle the complicated filing requirements under the new policy. The report also quotes a survey by the All India Trade Union Congress (AITUC) in July that found “a fifth of India’s 63 million small businesses – contributing 32 percent to the economy and employing 111 million people – faced a 20 percent fall in profits since the GST rollout, and had to sack hundreds of thousands of workers.”

Why is India Inc reluctant to participate in the Skill India campaign?

An essay by Santosh Mehrotra and Ashutosh Pratap in The Wire asks why India’s private sector refuses to contribute to the campaign that is primarily directed at improving their productivity and profits. The authors propose a “Reimbursable Industry Contribution” as “a way to bring all employers onto a common platform for skill financing by addressing the moral hazard problem (“One company will not skill it’s workers as others will poach them, and vice versa”). Such an ‘employer-skin-in-the-game’ mechanism means that industry makes a financial contribution, which is a small reimbursable percentage of the payroll bill. This goes into a training fund, over which private sector (through Sector Skill Councils) would exercise control.”

A number of activists including Aruna Roy have signed a letter to the government asking them to rethink their idea of using NREGA to subsidise farm labour in view of the agricultural crisis in the country.  The activists acknowledged the dire need to aid the agricultural sector but argued that this move would potentially harm the NREGA and divert it from its primary purpose.

To work or breastfeed: Tough choice sets back women in India’s informal economy
While mothers in India’s formal sector are entitled to six months of maternity leave, such protections don’t yet exist for mothers working in informal jobs. In the light of evidence that suggests babies need to be breastfed for the first six months of their lives for healthy growth, IndiaSpend reports on research by IIHS about working women in Delhi who cannot afford to be both primary earners as well as breastfeed their babies.

Foreign workers in Qatar now don’t need their employers’ permission to obtain a visa to leave the country. Under the new legislation, “only a maximum five per cent of each company’s workforce — thought to be those in the most senior positions — will still need permission to leave Qatar.” The law also includes reforms such as a minimum wage for all workers, worker committees, and a fund for those who haven’t received wages. The ILO and workers’ organisations have welcomed this move.

Since 2003, Brazil has set an example for the world by cracking down on plantations and factories through raids to rescue slave labour and large fines on companies that violate labour laws. Several rescued workers/victims have since led campaigns against large corporations such as McDonald’s and Nestle to demand that they are transparent about who they source their coffee beans from.

“But tighter budgets brought on by a stagnant economy have weakened the Labour Ministry’s ability to investigate allegations of abuse. Inspections in 2017 were half of what they were in 2013, according to the Brazilian government figures. Last year, 341 people were rescued from degrading working conditions, compared with nearly 6,000 in 2007.”

According to new research, Americans working in the service industry who are expected to rely largely on tips are at a higher risk for depression. Of those at risk, women are more likely to be affected. Workers who earn a large portion of their income through tips, or tipped workers, are twice as likely to live in poverty as their counterparts in non-tipping service jobs. The researchers write that, aside from financial instability, this could in part be due to the way service workers are expected to be cheerful even in the face of rude or cruel customers.