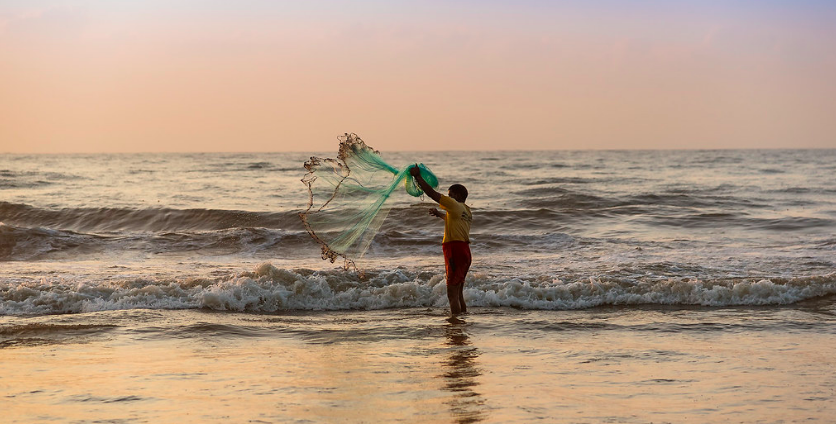 West Bengal: As the sun’s rays shimmered over the sea, Baren Khurai was fastening long jute ropes to the anchors to make them ready before venturing into the sea. Khurai resides at a stone’s throw away from the Bay of Bengal, in Dahasunamui village in Deshapran administrative block of Purba Medinipur district, around 180 km from Kolkata.

The 65-year-old has been fishing for the past four decades, but laments that the catch has been dwindling with each passing day, deepening concerns about his livelihood. “We used to catch around 10 quintals of fish by spending almost a week at sea nearly two decades ago but now it has fallen to just 10% of it,” Khurai said.

“It is becoming increasingly difficult for a group of 8 to 10 people to venture into the sea and survive on paltry returns,” said Khurai. “Our children are no longer interested in fishing and are moving to other states to work as labourers.”

With bottom trawling in banned near-shore areas wiping out aquatic life, small and marginal fishermen in East Medinipur district of West Bengal struggle to sustain a livelihood. While some switch occupations, others work in the same trawlers that affect their traditional livelihood.

“The gigantic trawlers operating at the sea do bottom trawling illegally and leave nothing for us. They destroy the ecology, but nothing is done to stop them,” said Khurai. Khurai’s situation epitomizes the pressing issues faced by the marginal fishermen of Purba Medinipur (East Midnapore) district.

The fishermen return with lesser catch nowadays because bottom trawlers use a heavy fishing net which is dragged along the seabed to catch fish and prawns. According to environmentalists, bottom trawling damages the ecologically-sensitive sea floor.

“It is a very destructive process as it virtually bulldozes the seabed and destroys the entire habitat and the aquatic forms that survive on it,” said Pradip Chatterjee, convener of the National Platform of Small Scale Fish Workers (Inland) and an environmentalist.

“The cod end of the net is small but plays an active role in chasing the catch and destroying the seabed,” Chatterjee said. “The trawlers keep only commercial species and dump the rest of the catch that cannot be sold.”

Bottom trawling is prohibited up to 12 nautical miles from the shore. But no one follows the rules. “The administration has been a mute spectator in implementing rules. Trawlers fish even near the river mouth, ruining the marginal fishermen,” said Debasish Shyamal, Secretary of National Fish Workers Forum.

“There is also the concern of food security as the trawlers collect only the export quality varieties and discard the rest,” said Shyamal. “The fish that could have been served on a platter goes waste. It reduces the catch for the small fishermen.”

Also Read: Narmada’s Largest Dam Fills up With Hunger and Homelessness in Its Wake

“We are looking into the issue of bottom trawling and a meeting has been planned soon to stop it. Undoubtedly, it is destroying the flora and fauna of the sea,” Surajit Baag, assistant director of Fisheries (Marine) of Purba Medinipur district, told VillageSquare.in.

The fishermen of Dahasunamui have grievances about the infrastructure. “The community hall’s roofs are leaking, and plaster has spalled off the walls. Venomous snakes regularly slither inside the building,” said Bidyut Bar.

The fishermen complain that there are no toilets. “The absence of pucca roads is another issue as buyers who come to buy fish in bulk have no easy access,” said 46-year-old Bidyut Bar. Those indirectly involved in the trade also have their grievances.

“We have been engaged in drying fish for the past several years and earn around Rs 200 per day; we are not even provided gloves since we get pricked by fish bones ,” said Shibani Bar. ”We have not received any support though we regularly hear about schemes launched for the benefit of fishermen.”

Fishermen blame a nexus between co-operatives and government officials in siphoning off funds meant for fishermen. “They take advantage of the illiteracy of the fishermen,” said Sarbeshwar Khanra, director on the board of Dahasunamui Marine Fishermen Co-operative Society Limited.

“Those with clean records suffer while co-operatives involved in fraudulent practices get regular financial assistance. We do not get loans and subsidies,” Khanra told VillageSquare.in.

Besides trawling, fishermen blame the increasing shrimp cultivation in the district for the dwindling catch. “The polluted pitch black water from the farms reach the sea through canals during tides. So we get lesser fish near the shore and have to venture deep inside to bring catch that can at least compensate the cost of our trip,” said Debobroto Khuntiya (50), of Baguran Jalpai village.

Subimal Bar (37), who supplies ice blocks to the fishermen for storing the catch, said that he returned home after doing odd jobs in the south for nearly 12 years, “I was forced to return because of my ailing parents,” he told VillageSquare.in.

He said that it was very difficult to survive. “I make a paltry sum of Rs 100 to Rs 150, after spending hours in a thatched hut trying to protect the ice from melting. I wouldn’t have returned if it were not for my family,” he said, as he tried to cover himself as best as he could, with clothes that had seen better days.

Around 1,000 families were involved in fishing in Dahasunamui village till a decade ago; it has come down to about 650. While most of them are opting for other livelihoods, some are forced to work in the trawlers responsible for their plight.

However, the small-scale fishermen who work in trawlers are also unhappy. Some fishermen, on condition of anonymity, said that they are pressurized for more catch and even assaulted while at sea, to meet the targets.

“We’ve been fishing for generations but now we are on a payroll and earn around Rs 9000 a month after staying at least 24 days of a month at sea. We manage to sustain our families but we have lost our freedom,” Biswanath Bar (52), who works on a trawler at Deshapran Fishing Harbor, told VillageSquare.in.

This article was originally published in Village Square. You can read it here.