While many say that GST and demonetisation have dealt a severe blow to their livelihoods, some still remain hopeful that the Modi government will take steps to address the fast deteriorating conditions. 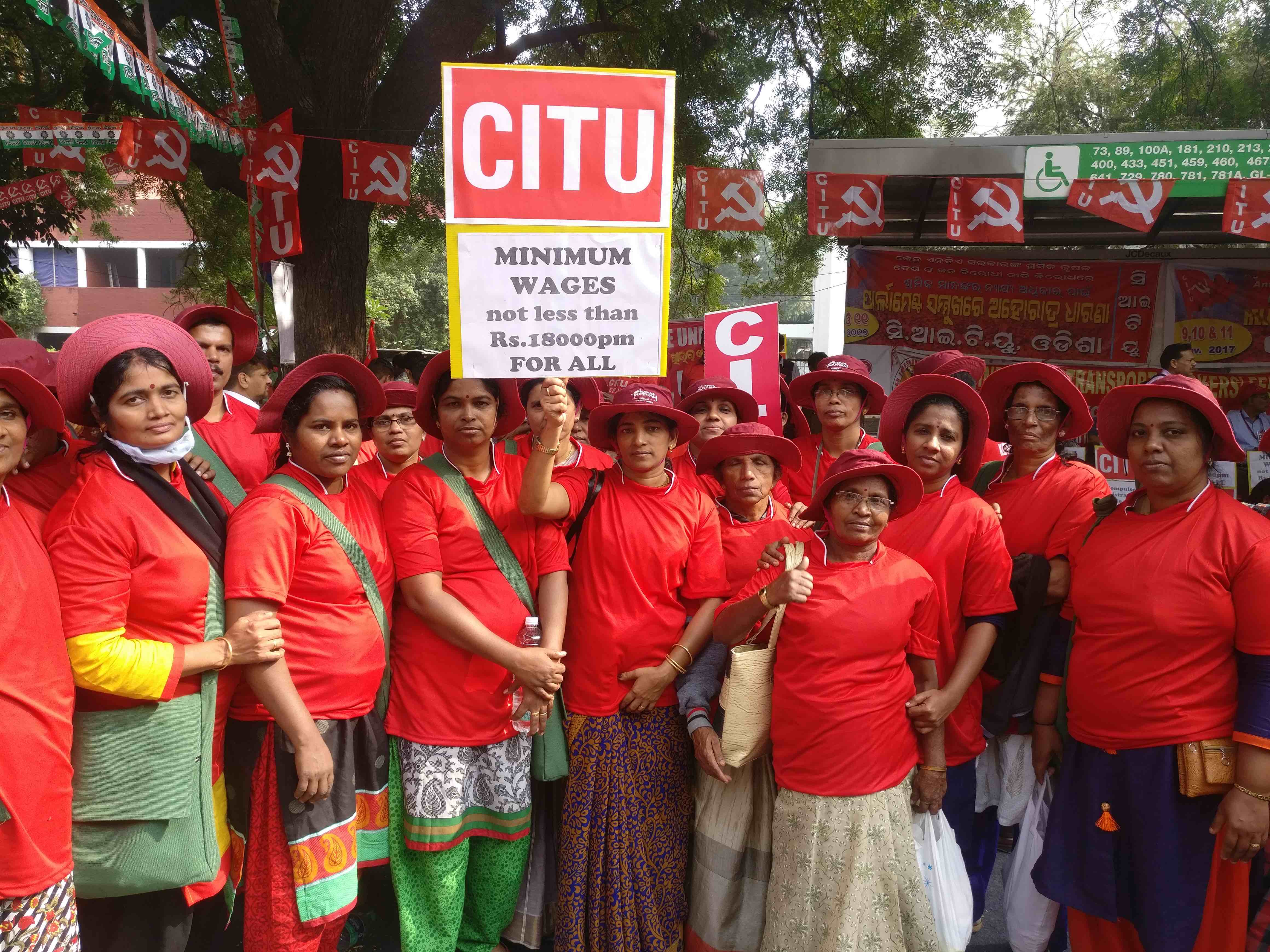 New Delhi: Even as New Delhi’s Jantar Mantar no longer remains the bastion of resistance it once was, Parliament Street has over the past two days turned into a sea of workers from across the country who have come together to draw attention to rising joblessness. Flagged by various Left-affiliated and other independent trade unions to mark the first anniversary of demonetisation, the ‘Mahapadav’, as the dharna is being called, seeks to address the fast deteriorating conditions of workers in India today. The protest hopes to make a powerful statement against what the organisers call the “anti-people policies” of the Modi government.

While most of the workers assembled attributed the dismal state of affairs in employment conditions to the twin blows of demonetisation and the Goods and Services Tax (GST), many remain hopeful that the government may lend them an ear now while taking what the prime minister had referred to as “harsh steps.”

The protest is not merely about criticising the government. Many still believe that GST and demonetisation may serve India’s interests in the long-run but also want the government to take immediate steps to penalise the powerful loan defaulters, who, according to them, enjoy political immunity.

Many of them think that Modi’s promises are big but he has not been able to deliver. “Workers are the backbone of the economy. How can the economy grow if they are in an unprecedentedly miserable state?” asked a truck driver from Odisha. 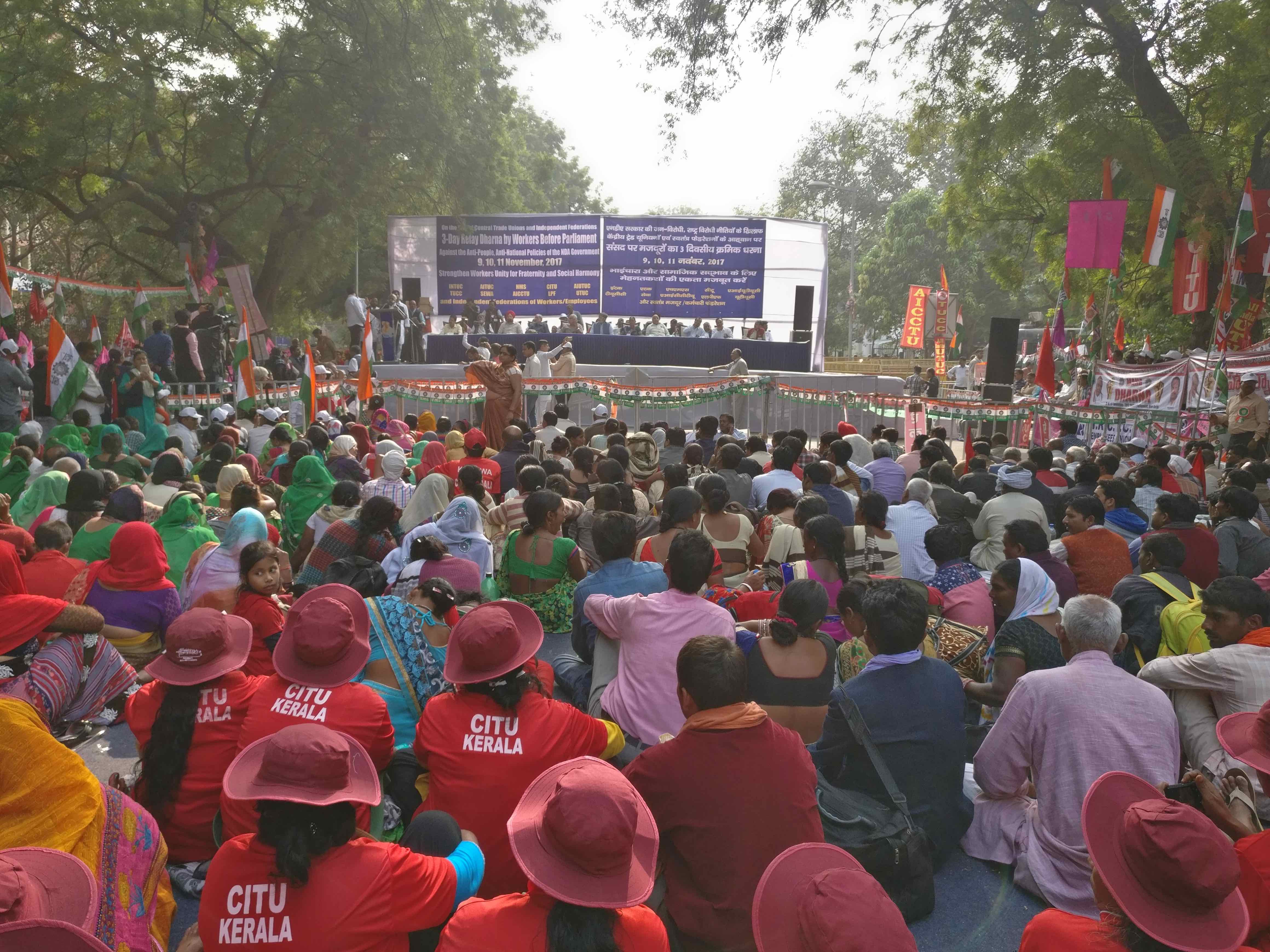 Irrespective of their political affiliations, the workers wished to show a mirror to the government, tell the officials that all is not well and hoped the prime minister will now sit up and address their long-neglected concerns.

The Wire spoke to a few of the protestors from various states.

Excerpts from the interviews follow. The conversations have been translated from different languages into English.

Both demonetisation and GST have wreaked havoc on my family. For more than ten years, my husband and I have made a living out of stitching clothes for companies. A contractor from our colony gets around 500 of us living in the Mustafabad area of Delhi work. We were paid Rs 150 every day and worked from our homes. The sewing machines were provided for by the companies.

I do not know what GST is, but ever since it has been implemented, all of us have stopped getting work. It has been almost three months that we haven’t had any clothes to stitch. The contractor says that the companies have stopped work and unstitched clothes have stopped coming from the source. What can he do if the clothes do not come? It is not his fault. 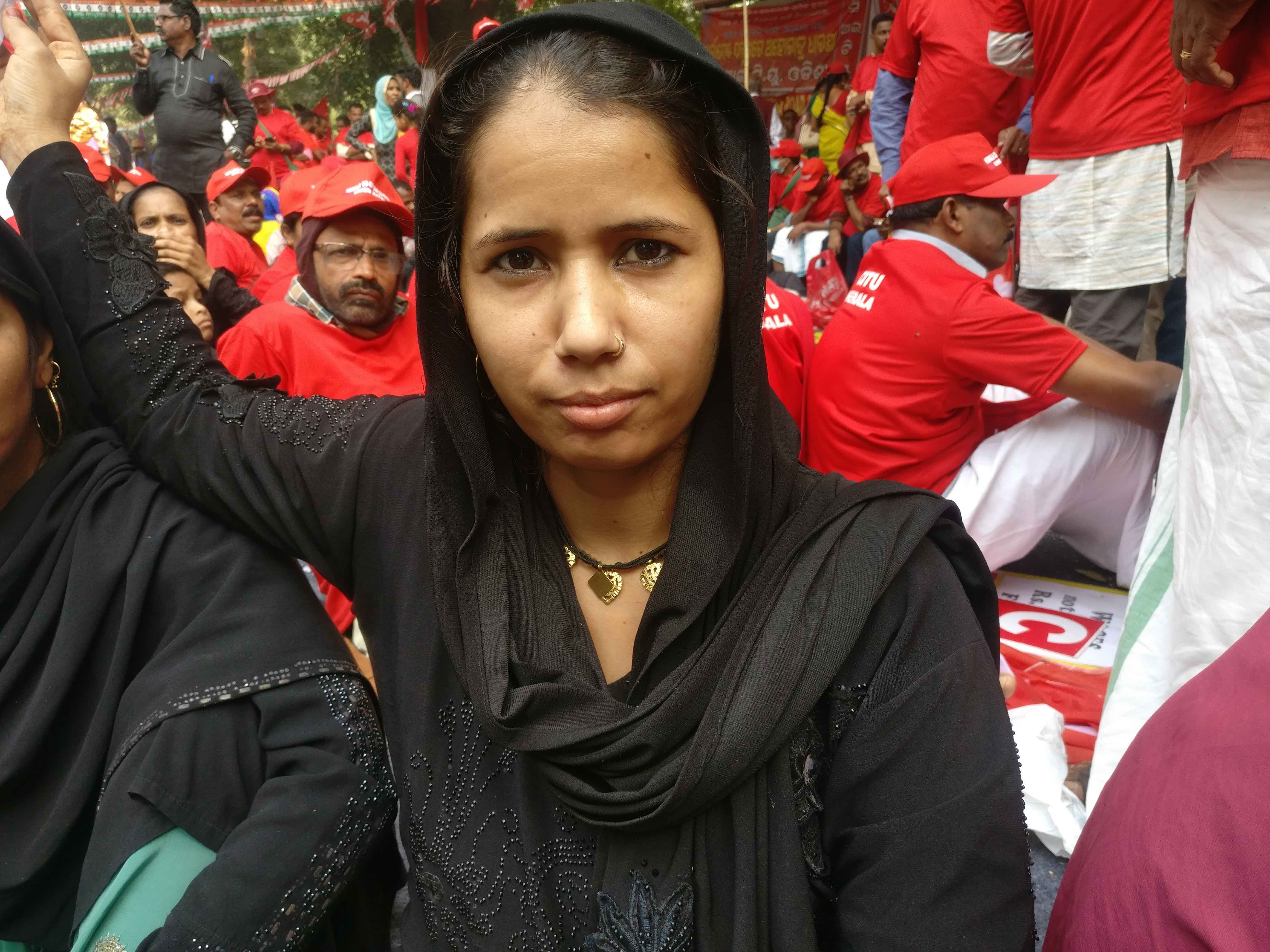 My husband has been looking for daily wage work outside. But he too does not get any work for more than ten days in a month. As a result, there is hardly any ration in our houses. This is not my case alone. Everyone who was doing this kind of work in Mustafabad is going through similar trauma.

Now, some of the women in my colony have found some new work but it is really too little. A new contractor has asked them to stitch leather bags and they get Rs 10 per bag. In one day, no one can make more than five or six bags, which means that your income is always less than Rs 100. How will we survive with such little money? But it is still better than no work at all.

While the Manmohan Singh government had initiated the process of destroying the Life Insurance Corporation (LIC), Modi has catalysed it. LIC’s own shares are being sold off and the government is looking for opportunities to sell its stake to foreign companies.

We are here to tell the government that LIC has played one of the biggest roles in the country’s infrastructural development – be it highway construction, provision of water and electricity, phone services and so on, LIC’s profits were used in it. Right from its beginning in 1956 under the second five-year plan, it has played such a crucial role. 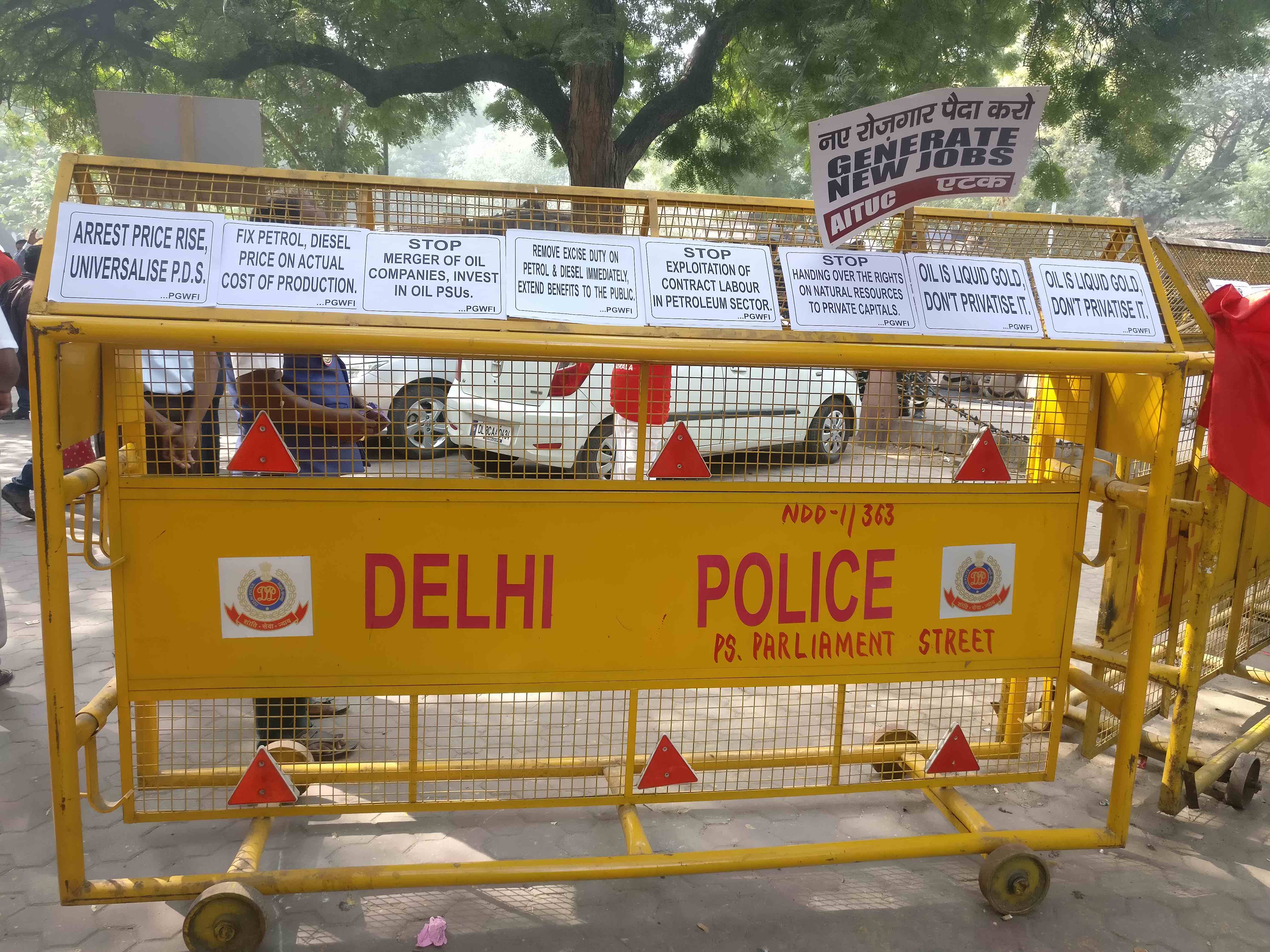 We are here to remind the government that LIC was formed after India’s first prime minister Pandit Jawaharlal Nehru acquired 244 private companies, which had a history of cheating their consumers, and built the LIC. Will it be wise to hand it over to profit-oriented corporates once again? 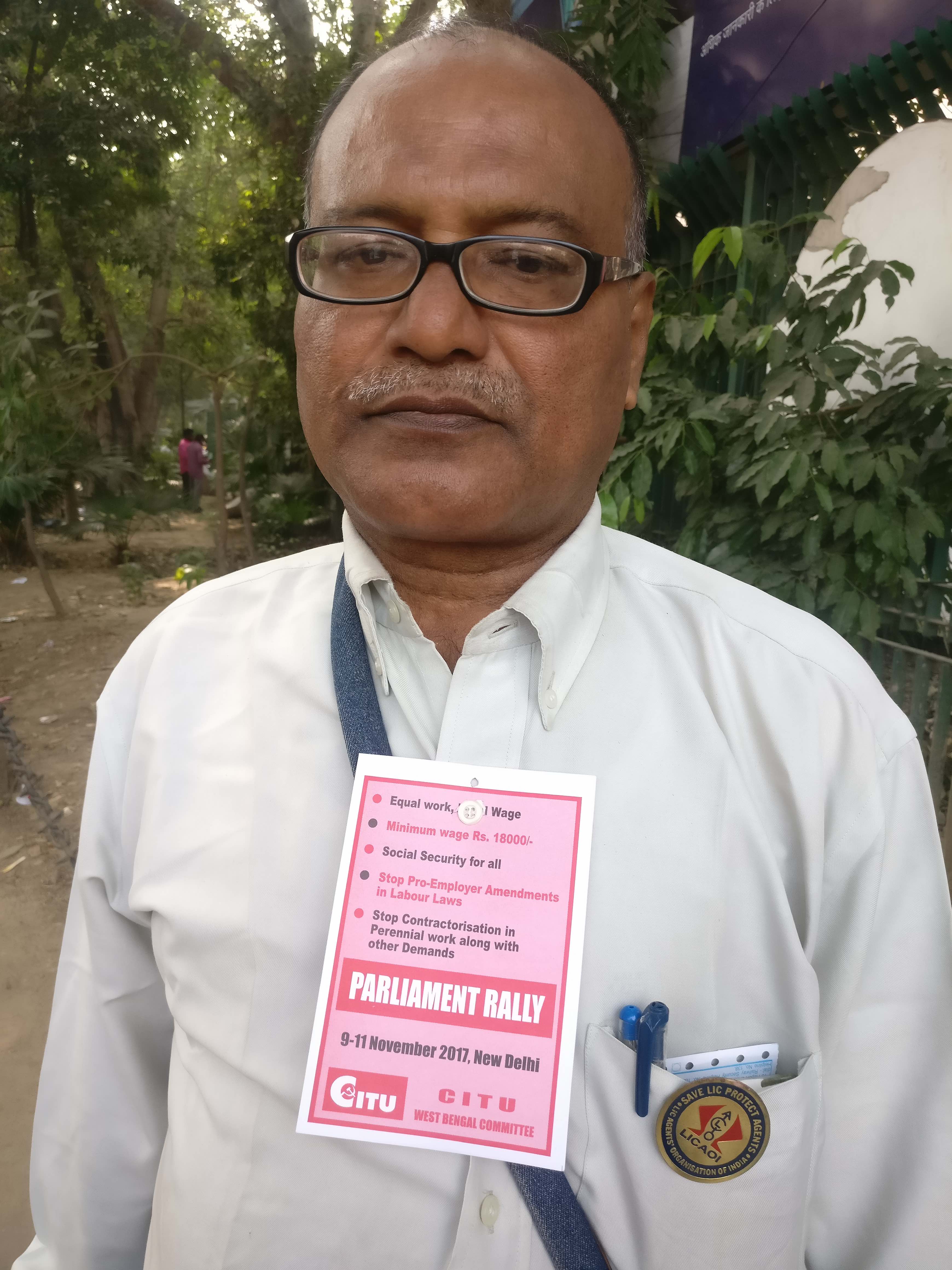 LIC started off with a budget of Rs 5 crore and now its value is Rs 28 lakh crore. If Modi gives momentum to the privatisation drive we understand that it is only because of conspiracy to benefit the rich.

While demonetisation ruined so many people’s livelihoods, the government has diverted people’s attention from the Rs 8.5 lakh crore NPA burden on banks through it. We are here to ask why the debt-ridden corporates, which have destroyed our economy, are not being held accountable by the government. It is ready to ruin our livelihoods but not ask one question to the corporates.

Similarly, GST has completely destroyed our lives. Insurance policyholders, across the country, are protesting after service tax of 3.75% to 4.05%. In single premium policies, the consumers will now have to pay an additional 1.8%. GST in insurance is very damaging for the sector and the change in rates was imposed without even discussing it with the stakeholders, all to benefit the big corporates.

I and many of my friends have come from Nalanda, Bihar. All of us cook mid-day meals in government schools. We get Rs 1,250 as salary. We work for 12 months but our salaries come only for ten months. Our contractor says we are entitled to wages for only ten months. 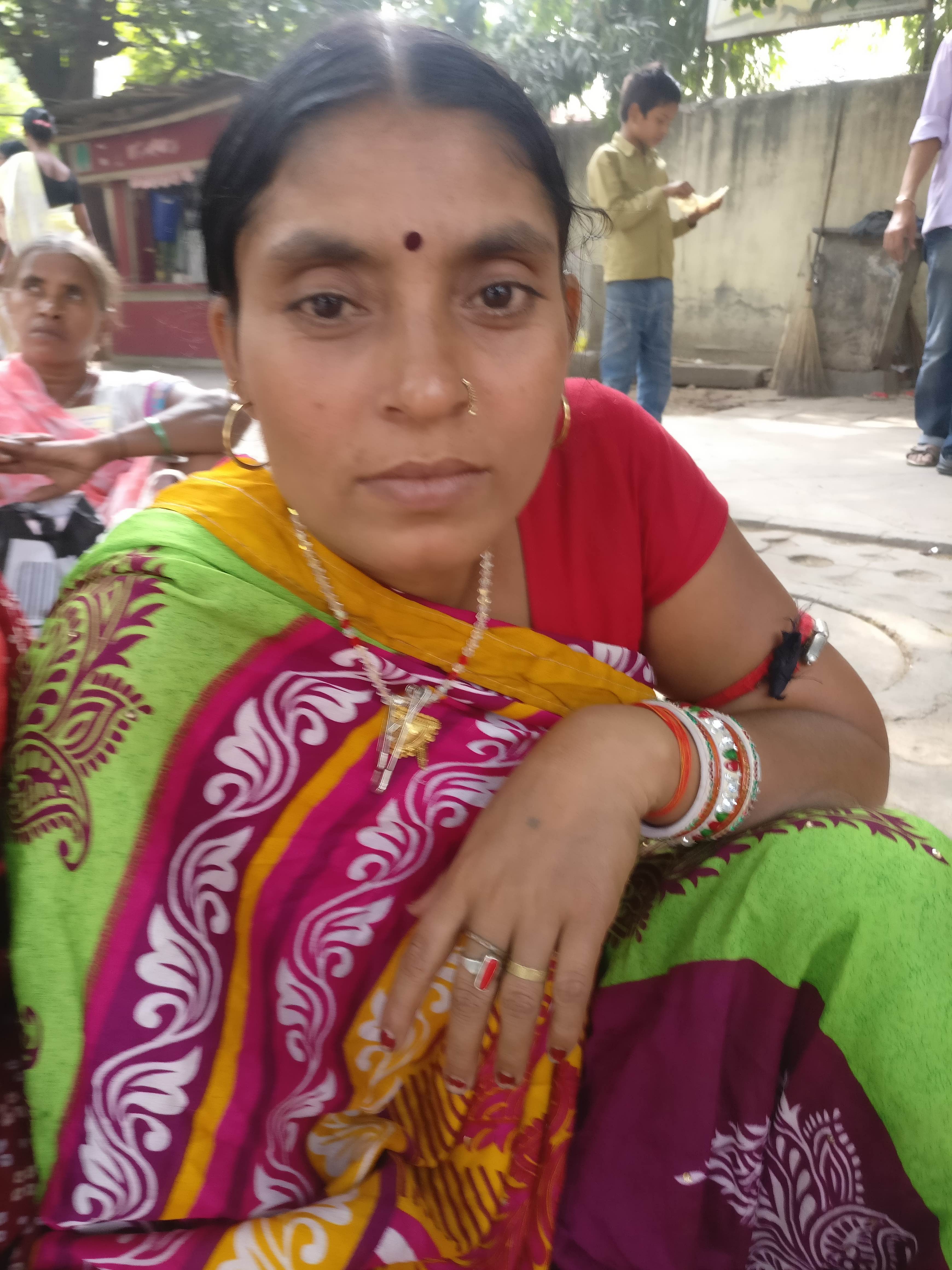 During notebandi (demonetisation), we faced a lot of trouble. Our contractors did not give timely rations for us to cook and children blamed us. I do not know what GST is; we are illiterate. But I know for a fact that the contractor has reduced mid-day meals’ groceries in the last two months. He says things have become expensive. Earlier he used to get eggs and some fruits but all of it has stopped. When we tell him that children are complaining, he shouts at us; he says that if children do not eat, why should we bother.

GST has broken our backs. I left my village in Bihar to work in a small textile factory in Ghaziabad around five years ago. The denim trousers, which are made in Gandhinagar, Gujarat, come to us and we wash them according to instructions to give them a worn-out look. Prior to the implementation of GST, our salaries used to be between Rs 9,500-Rs 10,000. But in the last three months, our wages have been reduced to Rs 7,500.

I hardly save any money after paying Rs 1500 as the rent for my room, where my whole family stays. This rent is excluding the electricity bill. My children do not go to school anymore. Where there is no money to properly eat, how will I send my children to school? Back in my village, my relatives, who were dependent on my income, have 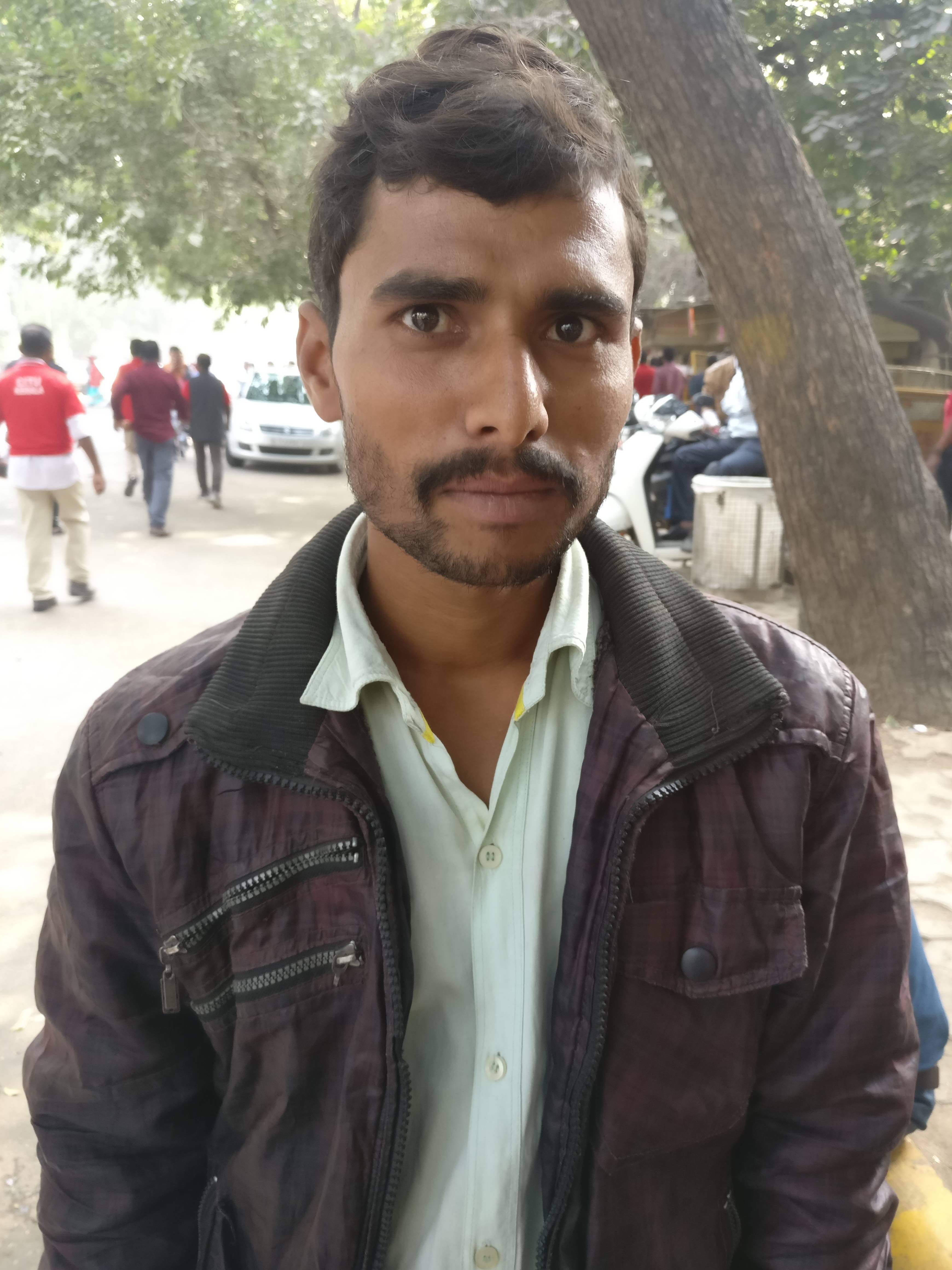 started to think that I have become snobbish because I did not send them any money in the last three months. The fact is I do not save enough. The factory owner says that until the time GST is implemented properly – he says it may take another three months – he wouldn’t be able to give me my full salary. But at least, I still retain my job. There are so many here who lost their jobs.

Like me, around 750 workers are suffering because of this. After demonetisation, too, we had to similarly suffer. The owner did not cut our salaries but asked us to give us our bank accounts to electronically transfer our salaries as he could not pay us in cash. Most of us had our accounts in our respective villages, it was of no use to us. We couldn’t have withdrawn our salaries anyway. Then, we got cheques for one month but could not withdraw as the banks too did not have any money that time. For three months, we had to live off debts and mercies of some kind-hearted people. I am still repaying the debt that I incurred after demonetisation.

My situation is very bad but as far as I understand from media reports, GST is for the greater good of the country. Modi ji has brought it to boost our economy. So, I support it. If after these few months of suffering we manage to get permanent jobs because of GST, it will all work out well in the end.

I am here to demand that minimum wages of daily wage workers should be increased. I am a construction worker but struggle to earn more than Rs 200 per day. The government should increase it to at least Rs 700. At least this much has become essential if you have a family which is dependent on your earnings. Construction work has taken a huge beating because of demonetisation. We have nowhere to go. Our second option, the brick kilns have also shut shop after notebandi.

Most of us struggle to get more than ten days of work in a month. My wife and children ask me where is the money. I do not have an answer. It has led to fights in my family. The contractor says there is no work and he has also been struggling to make his ends meet in the last one year. 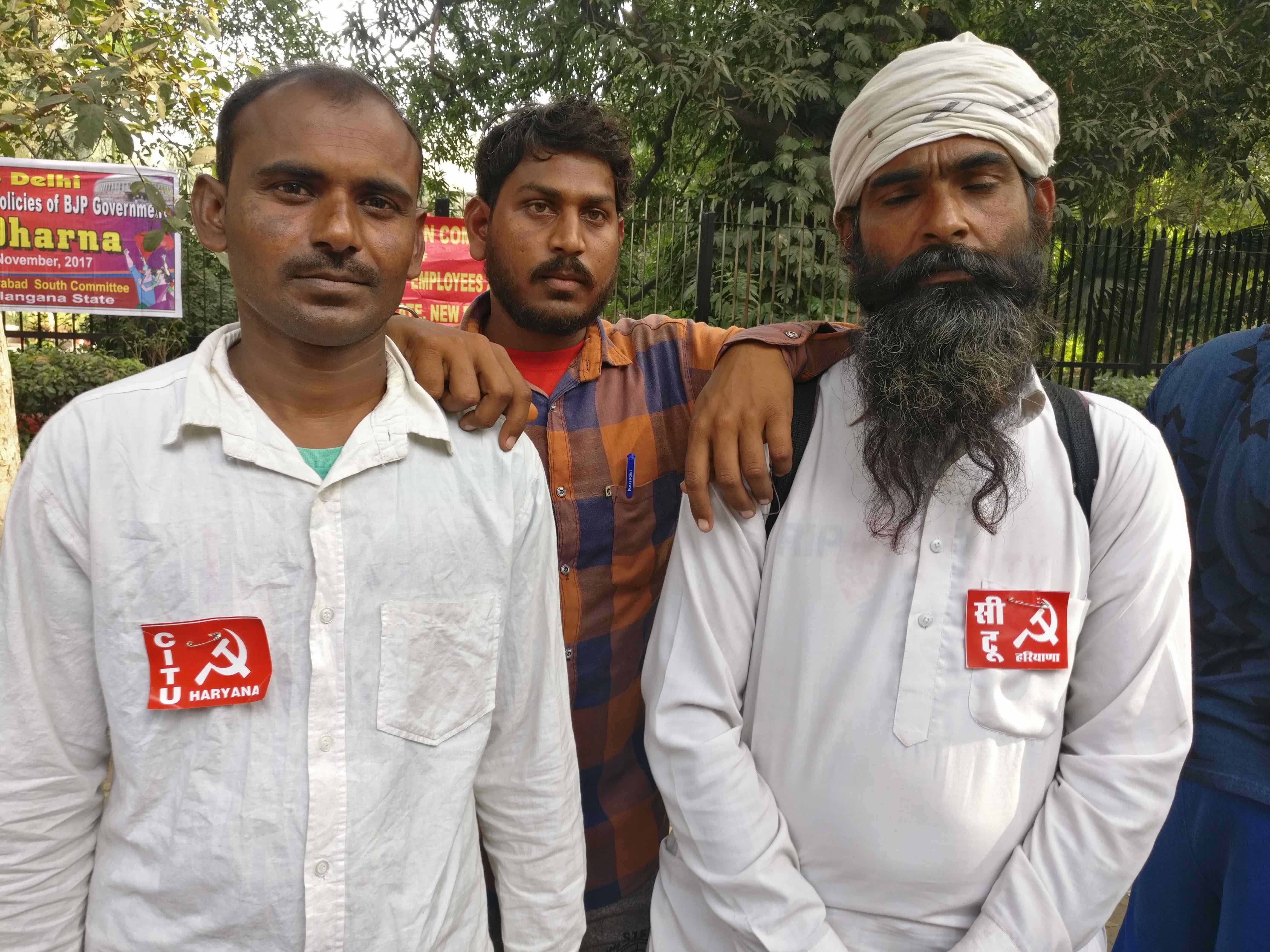 Previously, we could get some agricultural work in the farms. But the farmers are too broke these days. There is hardly any profit for them in farming. 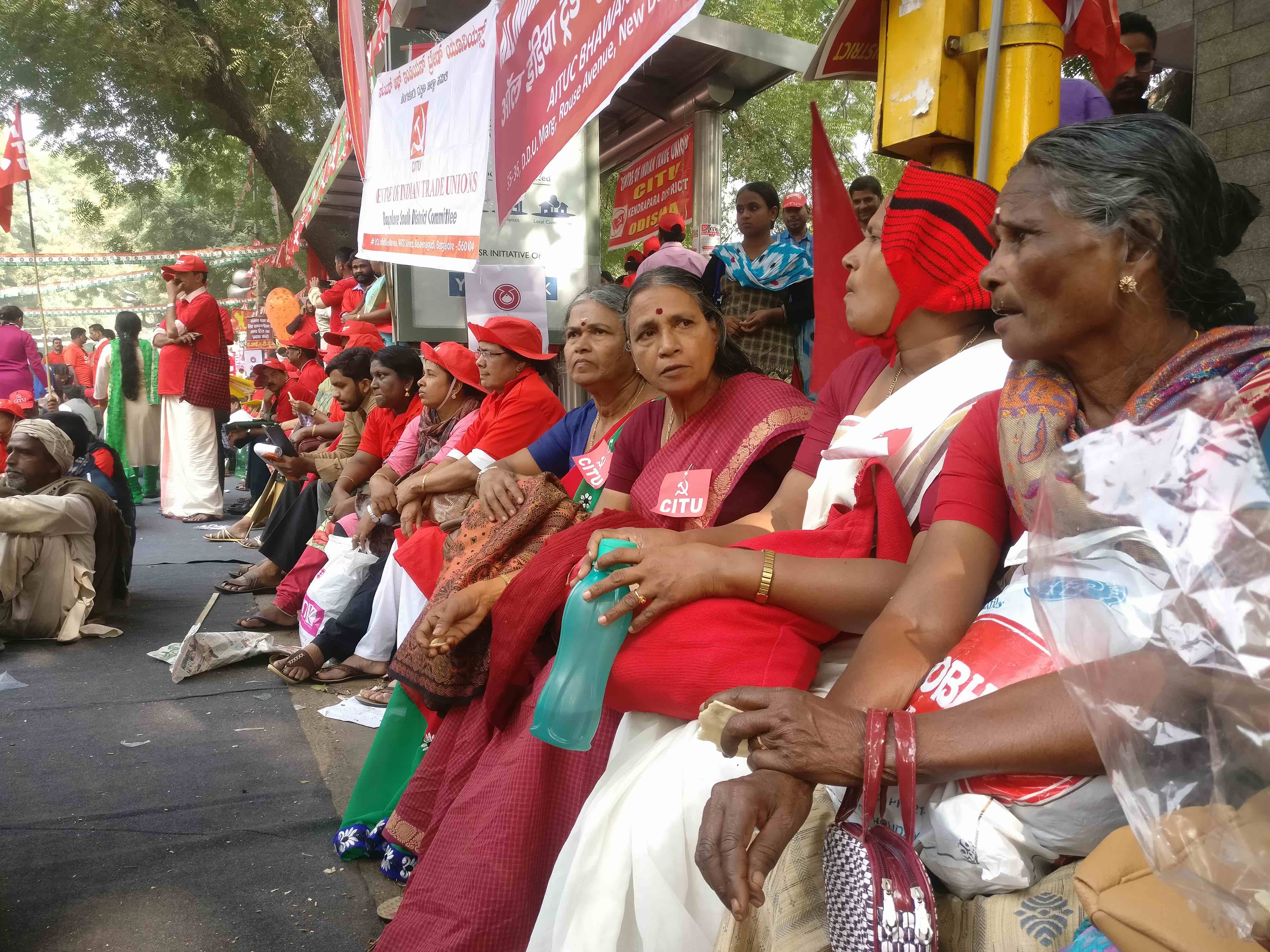 I am an anganwadi worker. Around 5,000 anganwadi workers have come from Kerala for the dharna. Currently, we receive Rs 10,000 of which the state government gives us Rs 7,000 while the central government gives us Rs 3,000 separately. We demand that our salary be increased to Rs 18,000 and that we receive the entire amount cumulatively through the department and not in chunks.

We would like to be recognised as permanent government employees, with commensurate benefits like summer vacations, bonus etc. 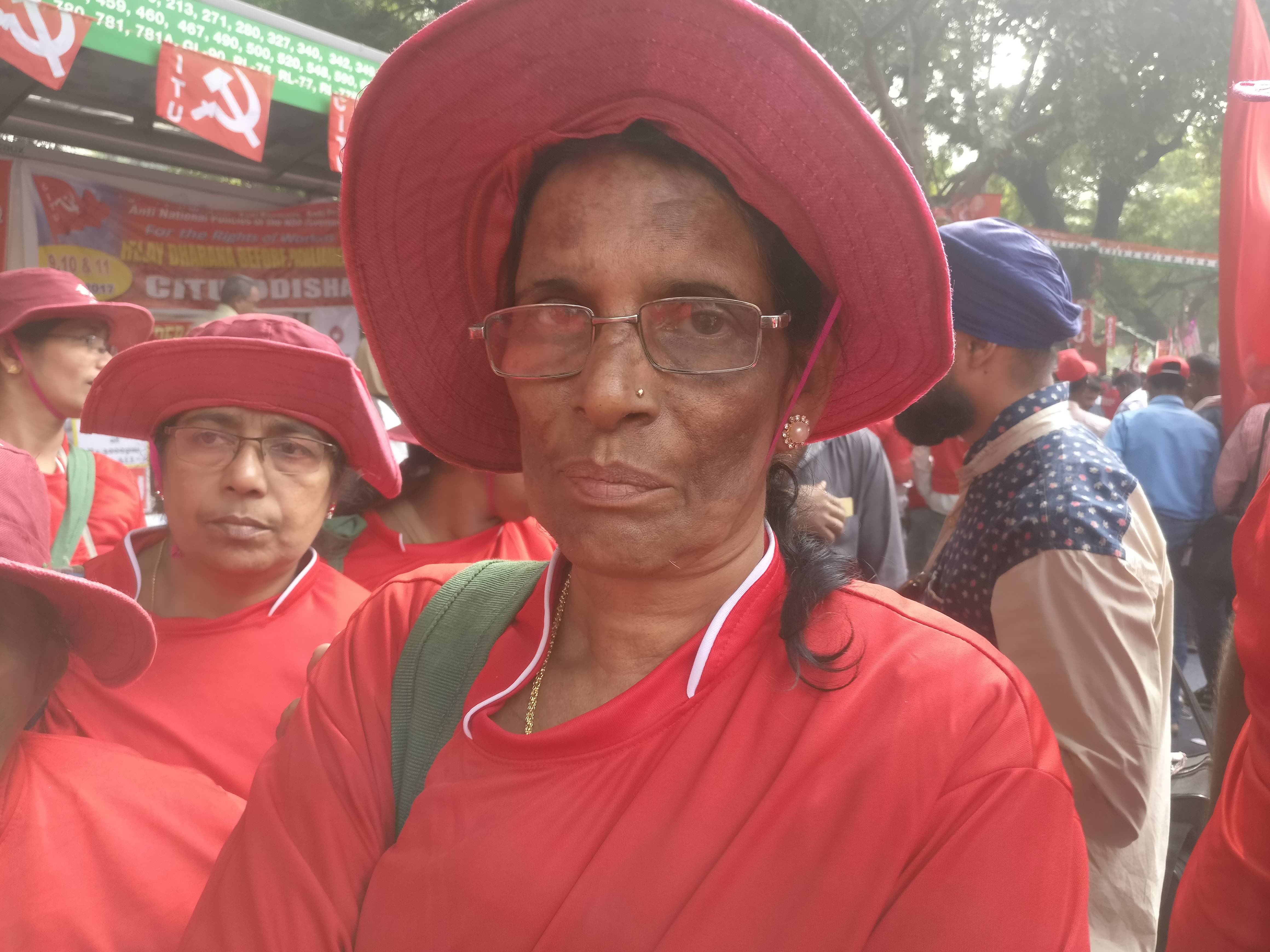 Since the current Modi government has come to power, our benefits have been scrapped while no new budgetary allocation has been made. We hardly receive anything from the Integrated Child Development Services Scheme (ICDS). Moreover, the new register system that it has implemented is proving to be quite detrimental to the well being of the employees. In Kerala, 11 registers have been put in place to monitor the ICDS and they are causing a lot of issues. It is our demand that the massive discrepancies in the current system be immediately addressed.