The Life of Labour: Despite Law Prohibiting it, Manual Scavenging Continues to Claim Lives 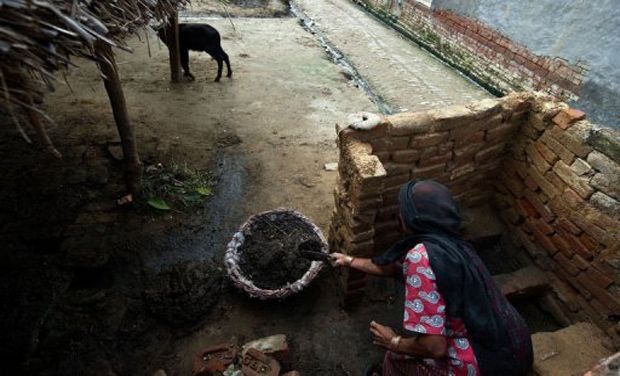 Konganti Rambabu had just gotten off the phone with his wife, promising that he would come home soon to discuss their daughter’s marriage plans, when he climbed into a sewer and was choked by the poisonous fumes. He was a 48 year-old worker at a petrol pumping station. Asked to climb in and help a sanitation worker by his employers, he did. Now, he’s just another statistic – except to his family.

The Employment of Manual Scavenging and Construction of Dry Latrines (Prohibition) Act was passed in 1993. Things should have ended then. In 2013, stating that “the dehumanising practice of manual scavenging, arising from the continuing existence of insanitary latrines and a highly iniquitous caste system, still persists in various parts of the country”, the Prohibition of Employment as Manual Scavengers and their Rehabilitation Act was promulgated. Four years later, manual scavenging is still killing people at a horrifying pace: 3 people died in Cuddalore on 20th March, 2 people (including Rambabu) in Vijaywada on the 16th and 3 people in Bangalore on the 6th.

Another incident was reported in Chitradurga in Karnataka on 10th March but thankfully there was no loss of life. Before that, there were 3 deaths in Bombay on Feb 16th. This barely scratches the surface. The Safai Karamchari Andolan (SKA) claims that more than 1200 people died from manual scavenging related activities between 2014 and 2016. Bezawada Wilson, winner of last year’s Magsaysay Award and founder of the SKA, has been fighting this issue for decades.

As Apoorva Tripathi wrote in The Wire, “As per the 2011 Socio Economic and Caste Census, 1,82,505 households in rural areas reported as manual scavengers; of this, the south zone has 16,362 manual scavengers. Compare this with the same government-based survey done in 2015 as per the 2013 Act that called for a list to identify and rehabilitate manual scavengers: the number is shockingly low – 12,226 – lost in translation, perhaps?” This enumeration seems to suggest an understanding of manual scavenging as some rare tradition. That is far from the truth. Most city corporations do not provide sanitation employees with equipment, and force them to enter unprotected into noxious sewers to clean blocks with their hands. One study on Hyderabad by the Basthi Vikas Manch, as reported in The News Minute, “suggests that there are at least 10,000 people in the city even today, who lower themselves into raw sewage, as part of their profession”. They might climb into six or seven sewers in a day for a salary of Rs 6700 a month.

Apart from sewers, the ‘unsanitary’ latrines that the act refers to still exist. These are dry latrines that aren’t connected to large sewerage systems, which means that they have to be cleaned by individuals. In parliament, Social Justice and Empowerment Minister Thaanwar Chand Gehlot stated that there were 26 lakh dry latrines in the country. A UN Report claims that most of these are concentrated in the states of Andhra Pradesh, Assam, Jammu and Kashmir, Maharashtra, Tamil Nadu, Uttar Pradesh and West Bengal. Till these sewers and latrines are fixed or cleaned by machines, they will remain death traps. Those who don’t die are afflicted with a number of skin diseases and tend to suffer from alcoholism, the product of years of swigging liquor to dull the senses. This aggravates a culture of domestic violence.

The primary reason for the continuation of the process is apathy on behalf of the public and the state. But instead of rectifying this, state governments seem to be going in the opposite direction. In Karnataka, the Social Welfare Minister proposed legalising manual scavenging ‘in an emergency’. In Tamil Nadu, attempts to raise awareness about the issue are being thwarted. Filmmaker-activist Divya Bharathi and her young team crowdfunded and released a documentary on the issue titled Kakkoos. Travelling with the movie around Tamil Nadu, she has had a number of screenings shut down by the police on the grounds of possibly leading to “law and order problems”. Screenings that have dodged the police have been violence-free which seems to suggest that the police are simply censoring an uncomfortable truth. To assume that a ban on paper would abolish a centuries old practice, deeply vested in caste discrimination, is naive. Without a strong will to educate our communities against this dehumanising practice, strict enforcement of criminal penalties and a genuine financial commitment to overcome the technological barriers, it is impossible to even make a dent in this travesty.

Starting with Ramky Enterprises, the contractor who won the 46 crore tender from the Bangalore sewage board, might be a good idea. The News Minute reported that agents of the company tried to enter the hospital and pay off the family. The New Indian Express also reported that the contractor was illegally subcontracting the whole sanitation project to a smaller outfit for a 10% commission. This smaller entity was the actual employer of the men who died. While compensation might be paid to the family, the prosecution record of manual scavenging cases is bleak despite harsh penalties being encoded in the 2013 Act.

“Stop Killing Us” is the simple demand of a new platform for sewerage workers launched by SKA. Will we listen?

Meanwhile in Manesar, hundreds of workers, ignoring the imposition of section 144 in the area, gathered to mark the anniversary of Bhagat Singh’s death, as well as show solidarity in protest against the 31 Maruti workers convicted on March 18th.

About 10,000 Anganwadi workers in Karnataka gathered outside Bengaluru’s Freedom Park on March 19th, demanding higher wages and regularization of work. In solidarity, 60,000 of the 63,000 anganwadis in the state have been closed. Some women have brought their children along with them, and have been sitting and sleeping on the road for the last several days.

Many states continue to delay payment of wages under MNREGS to the workers. An article in the Indian Express revealed that 57% workers in Maharashtra suffered delays in wage payments under MNREGS. This is still an improvement over states like Tamil Nadu with over 80% being delayed, and U.P where only 22% got paid on time.

SEZs in Belagavi and Chennai witnessed protests by workers against different anti-labour actions of the companies. In Chennai, workers at a Hyundai factory went on a sit-in protest against the unilateral suspension of two workers for a strike they led in 2012. The suspension order has been placed in abeyance for a week in order to restore industrial peace. In Belagavi, 300 workers of Aequs SEZ took to the streets against the unlawful practices of the company in resisting the workers right to form union. The workers also alleged that the police have framed false charges against the workers in order to quell their protests.

BAXI, yet another commute aggregator that launched the first motorcycle taxi service, has entered the app-based cab market with the launch of their app. This comes at the heels of long strikes by Ola and Uber drivers across many cities in India. BAXI has promised to work with drivers’ unions, fixing standard fares and taking no commission for the service.

Farmers from drought-hit Tamil Nadu took their protest to New Delhi this week. Carrying skulls of farmers who had committed suicide, they demanded that the Centre increase the drought relief for Tamil Nadu and also release the funds immediately. Groups of farmers also took to protest across Tamil Nadu with a string of demands including increasing drought relief, increasing mandated work days under NREGS, providing pulses and other essentials through PDS.

Municipal sanitation workers in Jammu, Chennai and Delhi were on protests this week. In Chennai and Jammu, the demands were for permanent jobs for the workers, who were fighting against retrenchment. In Delhi, the sanitation workers protested against the Delhi Chief Minister, demanding that CM Arvind Kejriwal take the initiative to discuss with the municipal authorities about settling their wages, pending due to the poor financial health of the East Delhi Municipal Corporation.

Read about evidence of slave trade in Tamil Nadu: “It is August (Tamil month of Avani) 17, 1448. At the corner where four streets meet in Velliyankunram village, a scribe etches on a palm leaf the servitude agreement that records that the brothers, belonging to an untouchable community (teentantori toti) from Mathur, are selling their seven children to Kanaka Ramaiah Gounder of Velliyankunram for 37 coins.”

The history of a bakers’ union in Argentina that lives on in baked goods through names such as ‘invoice’, ‘cannons’, ‘vigilantes’, and, well, ‘monk’s balls’: “Two years after its founding, the bakers’ union went on strike in Buenos Aires for 10 days, demanding better conditions and higher wages.  Workers clashed with the police and not only stood up for their rights, gaining a 30-percent wage increase, but cleverly manufactured a permanent political mark in their craft itself: the bakers decided to give blasphemous and anti-state names to bread goods that are still eaten daily across the nation.”

How bad are things in Belarus? Very bad. “About 2,000 Belarussians staged one of the country’s largest protests in recent years on Friday to voice their opposition to a law that imposes a tax on those not in full-time employment. Popularly known as the “law against social parasites” it requires those who work less than 183 days per year to pay the government $250 in compensation for lost taxes.”