The Life of Labour: Agrarian Policies for NDA 2.0; Drought-Affected Farmers in Maharashtra

A farm worker harvests maize crop in a field on the outskirts of Ahmedabad, India, February 1, 2019. Soybean and maize are two commodities for which FPOs have used the futures market the most. Photo: Reuters/Amit Dave

NDA re-elected: What’s in store for the farmers?

The acute agrarian crisis in India had been a major issue for the previous government – it faced widespread criticism as well as public mobilisation against its neglect of agrarian policy. The BJP’s manifesto has, yet again, promised various schemes to double farmers’ income by 2022.

However, apart from the cash support scheme that was implemented from early 2019, most of these schemes do not offer any immediate relief to farmers. The various schemes outlined in the BJP’s manifesto intend to tackle certain structural and infrastructural issues by investing over Rs 25 lakh crore over the next many years. It involves the digitisation of land records, improving connectivity and storage and offering interest-free credit.

According to BusinessLine, these measures might not immediately help improve the sentiment and aggregate agricultural demand. But they have the potential to offer long-term growth to the sector.

The drought-hit regions of Marathwada voted heavily for the BJP in the Lok Sabha elections. However, they have been staring at a grave crisis, aggravated by difficulties in accessing institutional credit.

In 2017, the BJP government had sanctioned a farm loan waiver for all outstanding loans up to June 2016. However, the subsequent droughts and the fall in prices have left farmers with little access to capital.

Thus there is a demand from the opposition as well as the members of the ruling alliance to implement a comprehensive financial assistance package along with an extension for the loan waiver.

However, the state finances, that have already incurred over Rs 22,000 crores, do not offer a lot of fiscal space. This is going to be an immediate challenge for the state government when it faces state legislative elections in a year.

Private moneylenders or sahucars often wield enormous power in villages, leading farmers to ruin with crippling interest rates – as two recent cases in Marathwada show. But they do so only because of the collapse of formal avenues of farm credit and the state’s reluctance to help. Credit: Parth M.N.

Over 3 lakh workers are registered with the Tamil Nadu’s 15 welfare boards for manual and other informal workers. Some of the workers have not received their welfare aid for over 6 months. Unlike the construction workers welfare boards that are financed by the cess collected from builders, other welfare boards are supported by state budgetary allocations.

This year the allocation has dipped precipitously to Rs 52 crore from last year’s Rs 87.8 crore. The allocation has dropped even as enrollment has increased. This is cited as the reason for the delay in clearing a majority of the monthly pension amount. Experts and union leaders have urged the government to clear the dues at the earliest.

Migrant workers and the right to vote

“Whether or not that is true, it seemed that there was an urgency to mark their presence. It was deeply upsetting then, when labourers like Mamta and her husband did not find their names on the voter lists after making the tedious trip from Gwalior.” Previously our columns have discussed the issue of democratic deficit, where large sections of the Indian working class are unable to vote because they are migrants. A story in FirstPost from Khabar Lahariya details the story of migrants who managed to return to their native lands to vote in these general elections.

A power press operator died after a part of a faulty machine broke away, ripping the stomach of the worker. He was transferred to three different hospitals but he succumbed to his injuries. The company is located in Faridabad and supplies auto components. 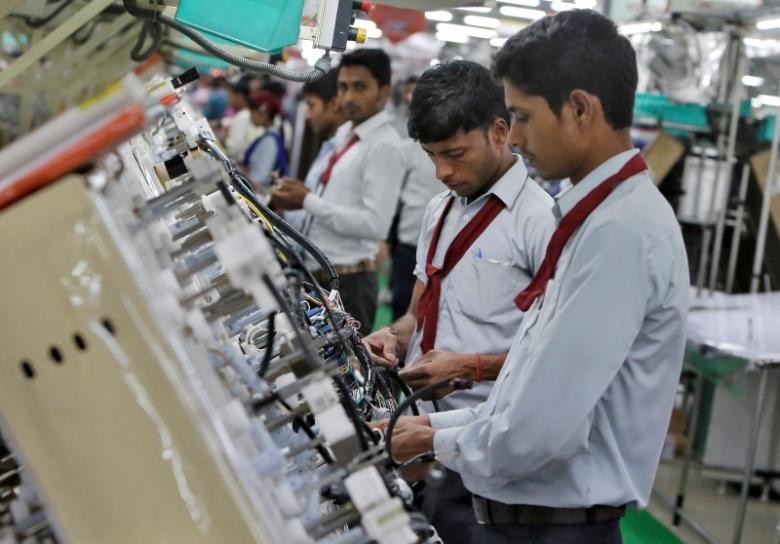 Employees of Motherson Sumi Systems Limited, work on a car wiring assembly line inside a factory in Noida on the outskirts of New Delhi, India April 28, 2016. Image for representation only. Credit: Reuters/Anindito Mukherjee/File Photo

Two workers, Bebal Khan and Mobin Khan, who were residents of Jaipur, died after entering a tank, full of poisonous gas, at a mill that they worked at. Both the owner and the supervisor have been arrested and a case of culpable homicide not amounting to murder has been registered.

The auto components sector in Tamil Nadu has been witnessing many closures and defaults, leaving long-term workers without jobs as well as huge wage and provident fund dues. Chowel India, a subsidiary of Chowel, a Korean company, is the latest to go through this crisis.

Chowel, a major welding company, has been fabricating steel frames for Hyundai India, through a subcontract from Hwashin. Hwashin has claimed that the company has not paid back the dues owed to it and has confiscated the equipment and materials from Chowel. It has claimed that these machines and materials belong to Hyundai, which had leased them to facilitate the manufacture of the components.

The senior management at Chowel has been absent all through this issue, leaving the workers of Chowel to defend their machines. This led to a major scuffle with police and the detention of many workers who had been on a vigil at the factory. As Hyundai is the sole customer for the factory in Chennai, the workers, who have many months of wage dues, find themselves without work and with their livelihoods at stake.

Also read: Unravelling the Build Up to Bombay’s Textile Mill Strike of 1982

The government has sought representations from journalists and non-journalist employees of newspapers and news agencies who would be affected by changes to the wage board.

Six hundred permanent workers joined the Association of Chemical Workers Union – an affiliate of Indian National Trade Union Centre – which is the central trade union associated with the Congress. But once they informed the management that they wanted their union recognised and a formal collective bargaining agreement to be signed, they were attacked. They forced workers to sign documents denying the union and transferred the union leaders and handed out suspensions. Then they fired many workers.

Is ‘right to work’ more important than ‘minimum income guarantee’?

Dunu Roy, writing for The Wire, discusses multiple reports and programmes on job and income guarantee policies. He compares the Azim Premji University’s recent report on a “Job Guarantee Programme for Urban India” and the Nyuntam Aay Yojana from the Congress manifesto with two more grassroots initiatives – the Workers Charter mapped out by the New Trade Union Initiative and the Right to Work Bill prepared by the Sajha Manch.

His overview asks a lot of important questions including who is guaranteed work, what kind of work and for how long, who will administer the programme, what are the costs of such a policy and more. While he acknowledges the well-intentions of the academic reports, he argues persuasively that workers need to be able to control the policies that affect them.

To create jobs, an industrial policy focused on labour-intensive industries is key

An article in the Hindustan Times compares India’s manufacturing economy with other South Asian economies. It reports that unlike other countries, India’s “total manufacturing employment has fallen significantly between 2011-12 and 2015-16 by 10 million in just four years (Annual Survey Labour Bureau data, with a sample size same as NSS), especially in labour-intensive manufactures.”

Looking at the manufacturing sector’s primary output, the labour intensive sectors are in decline but the policies of the government have shown no sign of caring about the quality of life of the industrial labour force.

RT reports: “Italian unions have refused to load cargo onto a Saudi ship carrying weapons, in protest against Riyadh’s war on Yemen. The dock workers have gone on strike, refusing to work until the ship leaves port in Genoa.” Humans right activists have joined with workers and are now protesting the ship and refusing to have anything to do with it because they don’t want to be complicit with the war in Yemen.

Burnout is making us worse at our jobs, according to the WHO

According to the latest version of a WHO handbook, “burn-out is a syndrome conceptualised as resulting from chronic workplace stress that has not been successfully managed.” Vox reports that the WHO describes burnout as the result of deep, long-term stress that hasn’t been dealt with. They also report that it is a condition that is specific to the occupational context.