For May Day, a Call to Defeat Gender, Class and Caste Divisions Among Workers of Southasia

For labour rights to be respected, the spirit of democracy needs to shine across this region. Workers fighting this war will find their strength in unity. 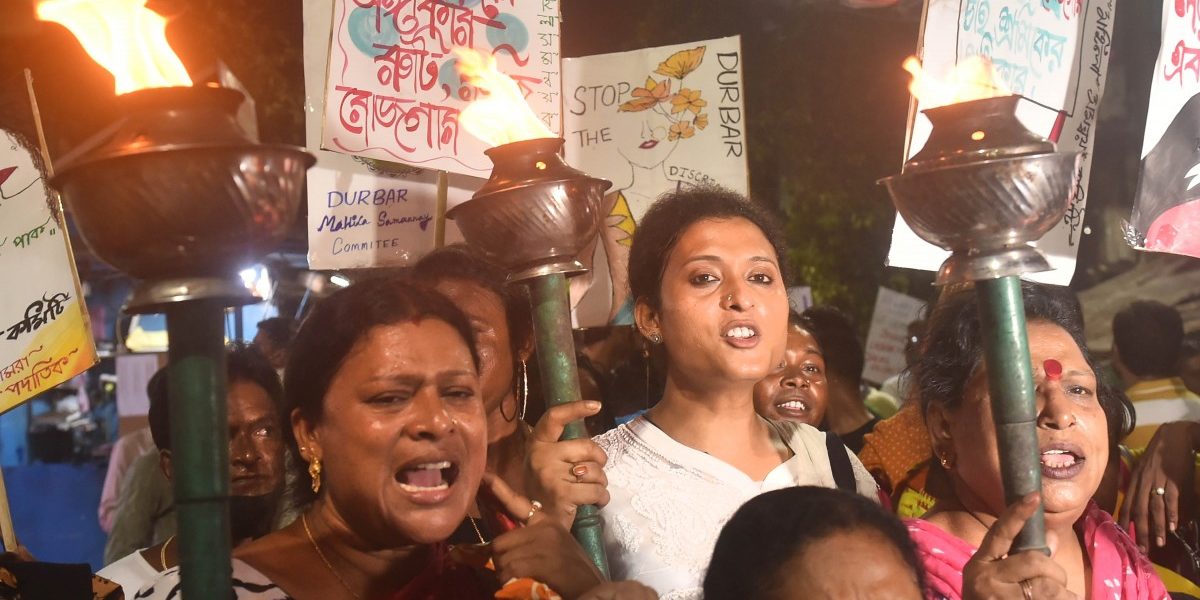 A torch rally on the eve of International Labour Day, in Kolkata, Saturday, April 30, 2022. Photo: PTI

The last Sunday of April this year marked the ninth anniversary of the Rana Plaza garment factory collapse in Dhaka.

It was also the birthday of late Southasian feminist activist Kamla Bhasin who always stood for workers’ rights.

The Southasia Peace Action Network, or Sapan, organised an online gathering featuring songs and speakers including leading activists and researchers from across the region on the topic of ‘labour rights and democracy in Southasia’.

This was the 12th in Sapan’s series of monthly events held on the last Sunday of every month since its launch in March 2021.

Sapan uses ‘Southasia’ as one word, following the lead of the pioneering regional magazine Himal Southasian established by journalist Kanak Mani Dixit in Kathmandu. Dixit is among Sapan’s co-founders.

With youth activist Sarita Bartaula from Nepal hosting the event, participants vowed to continue the struggle for peace and democracy, forge bonds and build solidarities. This is even more critical given the fallout of the COVID-19 pandemic that workers around Southasia and the world continue to wrestle with.

Any threat to democracy puts labour rights at grave risk, as is evident in the violence in the name of religion around the region. In India it is leading to the homes and shops of poor workers being bulldozed in predominantly Muslim neighbourhoods. The assault on the livelihoods of Muslim workers and businesses is well documented.

All this frays already weakened democratic systems and impacts those already vulnerable, pushing them farther to the margins, further affecting their rights and dignity.

One way to halt these disturbing trends is regional solidarity, commented analyst and Naya Daur editor Raza Rumi in his closing remarks. Joining from Ithaca, NY, where he teaches journalism, he outlined three main points of agreement from the discussion:

Rumi highlighted the gender, caste, class dynamics at play in the region that prevent access to decent work, and the plight of the indigenous people who are excluded from “the fruits of so-called development”. Neoliberal policies and colonisation of our own people leads to discontent, pushing them to rebel, he noted. A case in point is the Baloch people opposing the China Pakistan Economic Corridor or CPEC that threatens their livelihoods. Labourers on their way to their home after the end of their work, on the eve of International Labour Day, in Moradabad, Saturday, April 30, 2022. Photo: PTI

He also noted the emerging “gig economy” and how governments and big businesses are encouraging “de-unionisation”.

A “brutal, archaic visa regime” prevents people from meeting and forging cross border regional solidarities which are the need of the hour. Meanwhile, labour reporting has diminished as a beat for journalists, observed Raza.

The interconnectedness of issues is evident in how the slogan “Save the farmers, save Bangladesh” resonates across the region. If the farmers survive, the country will survive; the crisis of the peasants is the crisis of the entire population, said young activist Lucky Akter in Dhaka.

9 yrs of Rana plaza
no Justice no peace pic.twitter.com/LUkucs2cxz

The former student activist works full-time as a central executive member of the Bangladesh Krishak Samity or the Bangladesh Peasants Union, the oldest and largest peasant organisation in the country and is a central member of the Communist Party of Bangladesh. She also sang extempore in Bangla, reiterating a resolve to “organise peasants so they can get their rights”.

Well-known singer Arieb Azhar in Islamabad shared his version of the workers anthem, The Internationale. Opening with a Bangla translation, he sang his original verses in Urdu reflecting contemporary realities, calling for a reawakening of the masses, women, youth, labourers and farmers, and joining movements and struggles of people all over the world.

The concept that the strength of workers lies in unity emerged strongly in the discussion. The year-long farmers’ protests in India compelled the government to roll back the three farm laws. The economic crisis in Sri Lanka has brought workers out on the streets in historic protests.

“Those who build cities have no homes and those who produce wealth have absolutely no share in it”, said Bengaluru-based Maitreyi, member of All India Council of Trade Unions (AICCTU) who moderated the discussion. She also underlined ways in which neoliberal policies strengthen existing structures of oppression.

Sociologist Haris Gazdar in Karachi shared the findings of a research study he did with Delhi-based Nitya Rao on women agricultural workers across the region. The study found that women comprise over half of the agricultural workforce across Southasia. And yet, governments, society, families and even the women themselves often don’t recognise this.

When the surveyor asks questions listing various related activities like looking after livestock, “now over half the workforce turns out to be women”.

“Agriculture is important for women, and women are important for agriculture,” he said. The poorest workers in Southasia are in agriculture, and within that sector, women’s jobs are the worst paid even as they are doubly burdened with looking after health, nutrition, family, children and so on.

The findings of the study generated enough momentum for the issue to be taken up seriously in Pakistan, leading to groundbreaking legislation in Sindh, the Sindh Women Agriculture Workers Act 2019.

Those working on the issue “were able to do so because comrades in India had worked on a draft law that was tabled in the Rajya Sabha”, said Gazdar, referring to the 2011 women farmers’ entitlements bill tabled by agricultural scientist and then member of Rajya Sabha M.S. Swaminathan.

Countries in the region also influence each other in terms of bonded labour laws, he commented. We “stand to gain much by learning from one another” whether at the government or the workers’ level.

In Pakistan, Sindh and Balochistan provinces have passed groundbreaking legislations about the rights of home-based workers, added acclaimed women’s rights activist Khawar Rani Mumtaz in Lahore. These are remarkable achievements that other Southasian governments can use to enact similar legal frameworks. Estimates indicate that worldwide, nearly half of the 100 million home-based workforce is in Southasia. Most are women.

Mumtaz also presented the Sapan Founding Charter with the coalition’s basic demands like freedom of trade and travel and visa-free Southasia, translated into Hindi, Urdu, Bangla, Punjabi, Telugu, Marathi, and Sindhi by volunteers.

The Sapan Charter , said Gazdar, reflects “not just the experience of one country but of the entire region” which provides a political heft. “All our countries share a common history of struggle against global systems of exploitation – colonisation, racism. These power relations exist today”.

Cleaning the ‘sh*t’ in our heads

Power relations exist in other areas too. ‘What is the problem if scavengers clean human excreta? They are born to do this. So why should we think? Why should we stop this?’ That is how people think while justifying the practice of manual scavenging “where they can treat a human being as a slave”, commented Ramon Magsaysay awardee Bezwada Wilson, co-founder and National Convenor of the Safai Karmachari Andolan (SKA), in Delhi, highlighting the plight of sanitation workers and manual scavengers in India.

“You create smart cities, big roads, highways, and buildings but do nothing to modernise the sanitation system where sanitation workers don’t have to touch the sh*t and garbage, because the sh*t in the mind of those sitting in power believes that democracy and dignity are not for sanitation workers”, he said. 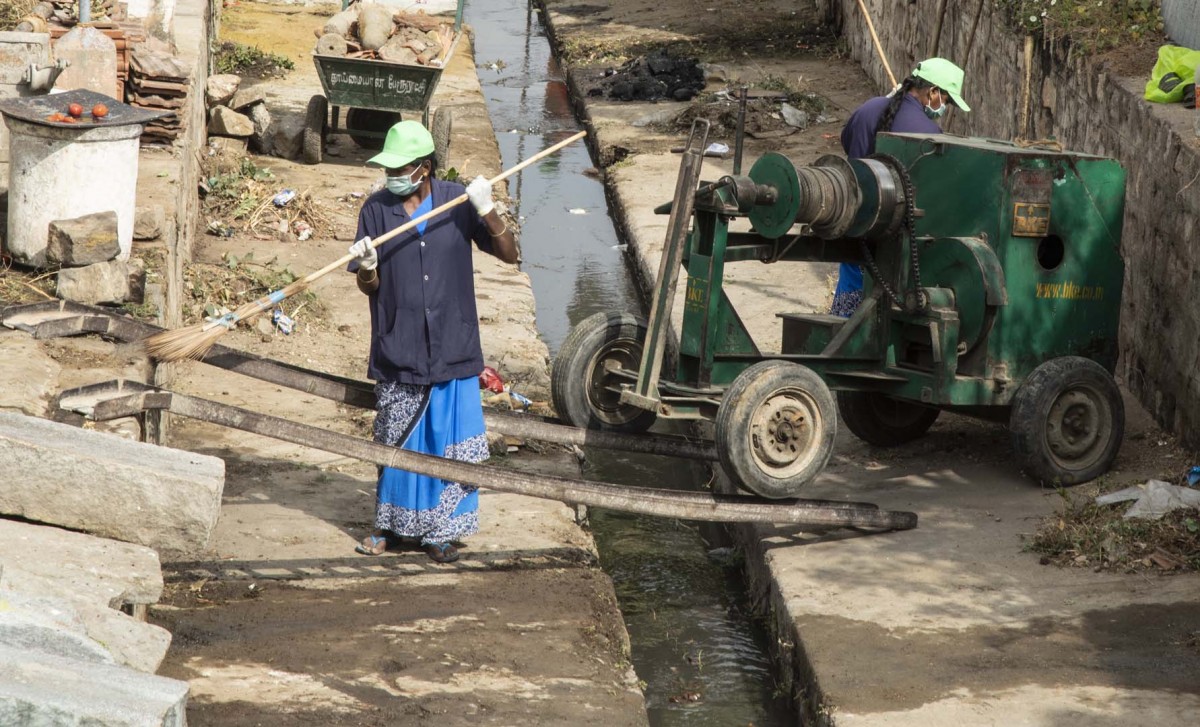 Thousands of sanitation workers have died while cleaning manholes and septic tanks, said Wilson, underscoring the need to mechanise this work.

Journalist, researcher, and educator Asif Aqeel in Lahore talked about a similar situation in Pakistan. The caste system is at play, with most sanitation workers being Dalits. Advertisements for sanitation positions call for non-Muslim applicants, and are sometimes withdrawn after activists raise the issue.

Aqeel is active with the Sweepers are Superheroes movement initiated by Pakistani parliamentarian Mary James Gill to bring dignity to this work. He is also Deputy Director of the Center for Law and Justice (CLJ), Pakistan and teaches sociology at the Lahore School of Law.

Veteran peace activist and labour leader Karamat Ali in Karachi was a key figure in the formation of SALF which was active until a few years ago. He was slated to speak on his experience, but asked to be excused – he was recovering from a road accident a few days earlier when his vehicle swung to avoid a family on a motorbike coming the wrong way. The action saved their lives but damaged the car and injured the passengers.

With UN Global Road Safety Week taking place annually in May, Sapan’s next event on May 29, will in fact focus on Road Safety as a Public Health issue in Southasia.

All these are interconnected issues. There is a need for alliance of trade unions with workers associations and research associations and consortia – “we cannot afford working in silos”, said Syed Sultan Uddin Ahmmed, summing up the discussion. Currently Workers’ Specialist, ILO Decent Work Team for South Asia, New Delhi he is former Executive Director of the Bangladesh Institute of Labour Studies (BILS). Parliamentarian and vice chairperson BILS Shirin Akhter was unable to participate due to connectivity issues.

Ahmmed said it was unfortunate that even on the occasion of the Rana Plaza collapse anniversary, there was hardly an expression of solidarity for those affected, or for the Visakhapatnam gas leak tragedy in May 2020, both caused by years of neglect.

Writer and columnist Sheeba Aslam Fehmi is a research scholar at Jawaharlal Nehru University, Delhi. Priyanka Singh is a data analyst in Delhi. Beena Sarwar is a journalist and editor in Boston. Singh and Sarwar are Sapan founder members.

This is a Sapan News syndicated feature. A video of the event is at the Sapan Facebook page.