Would ISRO Launches Be So Cheap If Indian Labour Were Not Underpaid?

We know India's ineffective legislation protects the cheapness of labour – but how do we know ISRO isn't inadvertently profiting from it? 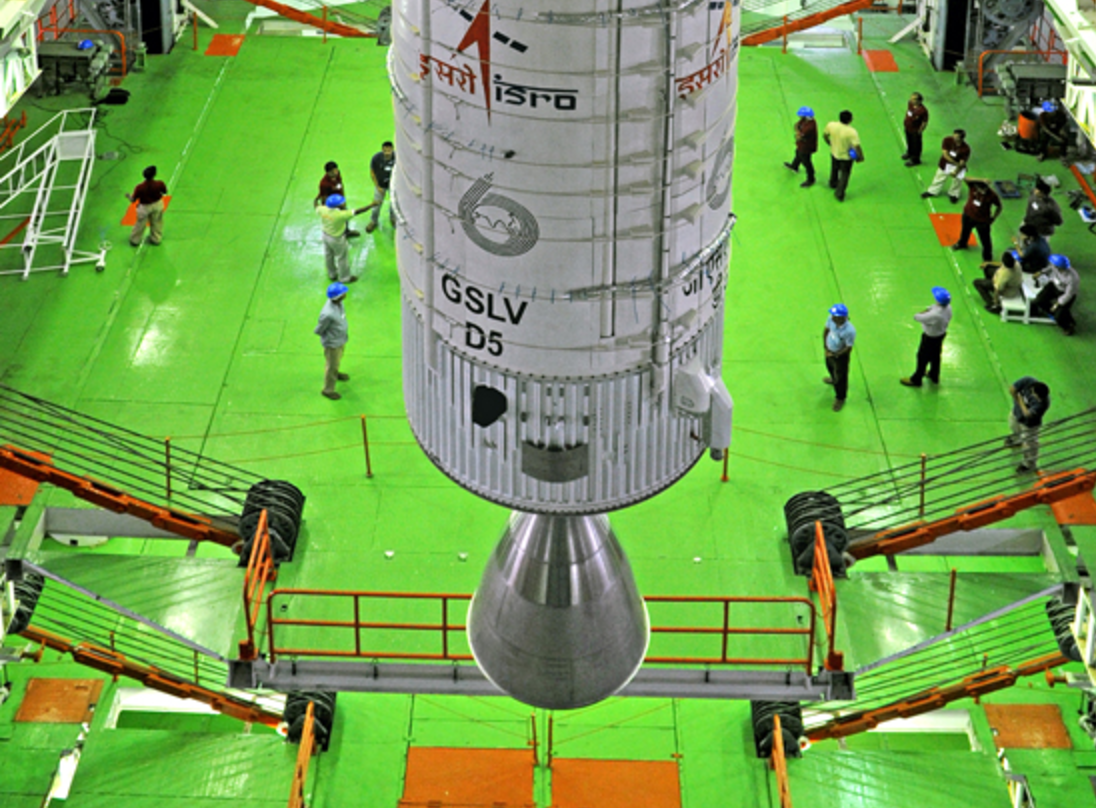 Engineers around the GSLV D5 ahead of its launch, in the vehicle assembly building, Sriharikota. Credit: ISRO

When the Indian Space Research Organisation (ISRO) launched its Mars Orbiter Mission in November 2013, its cost was a matter of much, and well deserved, pride: proximate to a puny Rs 500 crore. However, fixating on the price-tag often drew admirers’ attention away from the fact that the probe was a technology-demonstrator, put together by scientists and engineers to show more than anything else that it could be manoeuvred into orbit around Mars. It succeeded on September 24, 2014. At that moment, the primary mission was immediately completed. What’s been happening since then is the secondary mission. Loftier ambitions, such as those rivalling the NASA Mars Atmosphere and Volatile Evolution Mission (MAVEN) probe that launched at the same time, would’ve commanded a heftier investment.

Then again, how much heftier? Would we ever build something at the cutting edge of space exploration or research whose costs we wouldn’t be able to keep down? Further yet, how sustainable are our attempts at keeping costs down?

Shankkar Aiyar, a journalist and analyst, wrote in the New Indian Express (edited for brevity) on January 16:

It cost ISRO roughly $74 million to put Mars Orbiter Mission (MOM) in orbit, while it cost Hollywood producers around $100 million to produce Gravity. NASA spent $671 million the very same week for its Mars mission, MAVEN. ISRO works with a fraction of the budget available to NASA. In 2016-17 it was around Rs 7,500 crore or around $1.1 billion, while the 2016 budget for NASA was $18.5 billion. The drum rolls and applause are well deserved. The question is, can India leverage this and other illustrative successes in frugal engineering and innovation for greater good. How does India and how do Indians benefit from the spectacular capabilities of ISRO exhibited year after year? A critical experiment underway may have some answers.

In late 2015, Roads and Transport Minister Nitin Gadkari asked why India cannot shift to electric buses and vehicles [to mitigate air pollution]. The answer: high cost of batteries. Although India does not lag in technological prowess to suffer high costs. Remember the Mars Orbiter, which travelled 622 million km in its heliocentric trajectory towards Mars, was powered by batteries developed by ISRO. … Gadkari approached ISRO and asked if the technology that powered the MOM can be made available. The result: ISRO made available the technology to produce step-down versions of lithium ion batteries for automobiles. The cost of producing these batteries is expected to be a 10th of what it would cost to import these batteries.

For Aiyar, frugal engineering is a legitimate aspiration to work towards and which he’s calling ISRO a leader in. This is indisputable; like the author says, the accolade is well-deserved. However, we must be wary of frugality because from there to ‘making do’ is just a hop. Frugal engineering is a brand of engineering targeted at markets where there is a marked preference for function over form, for “getting the job done” over “making it look good while it’s doing it”. In such cases, optimising for performance has to compete with optimising for cost, and an outcome that is the product of this process won’t be able to do better than it can afford. So while frugal engineering may be a good thing in many environments, it shouldn’t be so for space. Launch vehicles always need to meet a safety threshold; if they can’t afford to, then that’s a deal-breaker. #SpaceIsHard

And #SpaceIsHard no matter where

However, it is undeniable that there is another kind of frugality that ISRO embodies: low cost to space – which brings us to a bigger-picture conflict that has been lurking behind our braggadocio. A friend of mine, who lives in Ottawa, recently remarked that most things cost more or less the same to make in India as they do in the West, and that the difference only really kicks in when human labour becomes involved. In the West, labour is valued more highly than it is in India. As a result, products whose development has benefited by human skill and work have to recover more value through their exchange than do products that have involved no human efforts. In India, human labour costs much less, so human-made things cost not much at all.

This author has received anecdotal information on multiple occasions that ISRO seldom pays for overtime while freely asking it – and particularly so ahead of MOM’s launch. Overtime for the sake of helping your employer out is sweet but it shouldn’t come at the expense of allowing your employer to make a habit of it. And if an employee doesn’t want to do it, she should be able to opt out. A well-structured pay-scale that clearly defines what counts as overtime work, and how much an employee will be paid for it, is essential to feeling like one’s work and time are being valued and are not being taken for granted. Further, as a UN Development Programme report put it in 2015,

While work is generally beneficial for people, the quality of work can be affected by doing too much work. A culture of overwork is increasingly common, facilitated by all kinds of mobile devices that enable constant access to work. The pressure of a round-the-clock work culture is particularly acute in highly skilled, highly paid professional service jobs such as law, finance, consulting and accounting. The overwork culture can lock gender inequality in place, because work–family balance is made more difficult for women, who bear a disproportionate share of care work.

It is true that a fledgling space organisation in a developing nation with a puny budget is trying to do amazing and “world class” things. At the same time, how do we know that such practices aren’t privileging us to delay a reevaluation of human labour, and to formulate and impose fairer wages? Because every employee who agrees to work for cheap is also cheapening labour as such; it is incumbent on all of us to insist on being paid fairly.

This is undeniably a leading reason ISRO, or any successful public-sector organisation in India, is able to keep costs down. Imagine paying a domestic worker Rs 10,000 a month instead of Rs 1,500; now imagine what other costs would go up as a result.

In this exercise, all of it might seem arbitrary, that the price of commodity X rises with income Y, and that X might as well be x (<X) because we’ve been able to keep Y at y (<Y). This is wrong: we’ve not been able to keep Y at y as much as your household help’s salary, and her economic class, down. If onions cost, say, Rs 200 a kilo, even a technology-demonstrator of a mission to Mars could cost Rs 4,800 crore instead of the Rs 480 crore it did. Should this make us cheer harder for how much we and our country value human labour or quieter for no longer being able to claim our interplanetary mission cost less than a Hollywood movie?

Public-sector undertakings (PSUs) are a high-wage island in India, which is why people are eager to join them. But it doesn’t mean the wages are great in absolute terms. This is a reflection of low living standards across the board that even higher PSU wages alone may not remedy.

This isn’t to decry all forms of disparity as much as to highlight an impending conflict we are faced with. For example, a major part of ISRO’s recent success has been attributable to the fact that launch costs in Europe and the US are very high, and have been kept down in some cases by feats of managerial, engineering and administrative excellence. But by and large, the costs are sky-high and frequently unaffordable for payload makers and operators from developing nations. ISRO has used this disparity to build low-cost launchers. And by exploiting this disparity, India – through ISRO – has reduced the disparity between itself and developed nations in some other sector, for example by reinvesting profits. Clearly, being able to do things on the cheap results in an economy of opportunities that evaporates the longer it is sustained, with good effect.

However, there needs to be a line such that this ‘exploitation of disparity’ doesn’t go all the way, such that individuals are not bled for the sake of broader sectoral gains that may or may not reach them. For example, workers who clean open drains in urban India are paid a pittance and not given any safety equipment worthy of the name. This allows municipal authorities to keep drain-cleaning costs low. This is wrong, concretising as it does an ethic that is antithetical to the idea of ‘exploiting to gain’.

Similarly, launching a PSLV rocket at $15 million apiece shouldn’t ever be squared off against cleaning drains for a couple hundred rupees. Yes, should this person have to be paid, say, Rs 1,000 for every 100 metres of drain cleaned while wearing protective clothing, the difference between a PSLV and, say, a Ukrainian Dnepr would fall from the already-thin $9 million (Rs 61.3 crore) that it currently is. Even the lithium-ion batteries that Gadkari wants to power electric buses are liable to have profited from cheap labour, from the ineffective legislation that protects the cheapness of labour.

In June 2016, in the Anna University, Chennai, campus, two labourers died while trying to seal a tank (part of an experimental setup to see if pressurised air could store energy). But despite there being no less than sixteen laws claiming to protect their lives, not even one was contravened in their deaths. Thomas Manuel wrote in The Wire at the time:

The International Labour Organisation (ILO) statistics from 2003 claimed that 403,000 people die from work-related problems in India. This translates to about 46 people dying per hour. No updated statistic seems to be available. Per the ILO website, India has only ratified five conventions on occupational health and safety; more than 12 are pending. This includes convention 155 that discusses the fundamental tenets of an occupational health and safety policy that a country must implement. There is even an economic angle for improving working conditions. The loss of productivity and subsequently revenue, directly and indirectly, due to injuries and accidents in the workplace has been quantified in countries like China to be to the tune of $38 billion.

The noted architect A. Srivathsan once defined beauty in a way that has seemed conceptually relevant in a variety of fields (this author took his classes at the Asian College of Journalism). He said, “Ugliness is marked by erasure and beauty is that which is marked by permanence.” So by repeating and repeatedly celebrating ISRO’s frugality, we are beautifying it – and uglifying that which stands in opposition to it. At times like these, we should be careful to not uglify the dignity and value of human labour itself in pursuit of what happen to be circumstantial gains. Or, in the name of this or another frugality, we will soon seek to erase them.