Why Do Labourers Migrate to the Kashmir Valley Despite the Dangers?

Between May 1 and June 2 this year, nine Hindus were killed in targeted attacks. But the number of workers migrating to the Valley has not reduced. Srinagar: On a cloudy morning at Hawal Chowk, 37-year-old Parvesh Jha has been waiting since 7:30 am for an odd job to earn the day’s bread. Jha, originally from Bihar, arrived in Srinagar in April at the peak of the tourist season this year. Since then, he has worked multiple jobs – in brick kilns and at construction sites. Now, he is looking for a new occupation in the conflict-ridden Valley.

Jha is not alone, at least 15 other men wait with him, to be taken by different employers for semi-skilled labour that they provide. The men are a consolidation of cultures, languages and dialects from across India. None of them understands Kashmiri. But a common motive brings them to Kashmir, one of the most militarized zones in the world.

Recently, there have been targeted killings of non-locals in Kashmir. On June 2, 2022, militants fired at two non-local labourers at a brick kiln at Magraypora in the Chadoora area of the central Kashmir district. The labourer who died in the attack was identified as Dilkush Kumar from Bihar. Militants are said to have killed around nine Hindus, both locals and non-locals, between May 1 and June 2 this year.

Despite these threats to non-locals in the Valley, what pushes labourers to migrate to Kashmir? 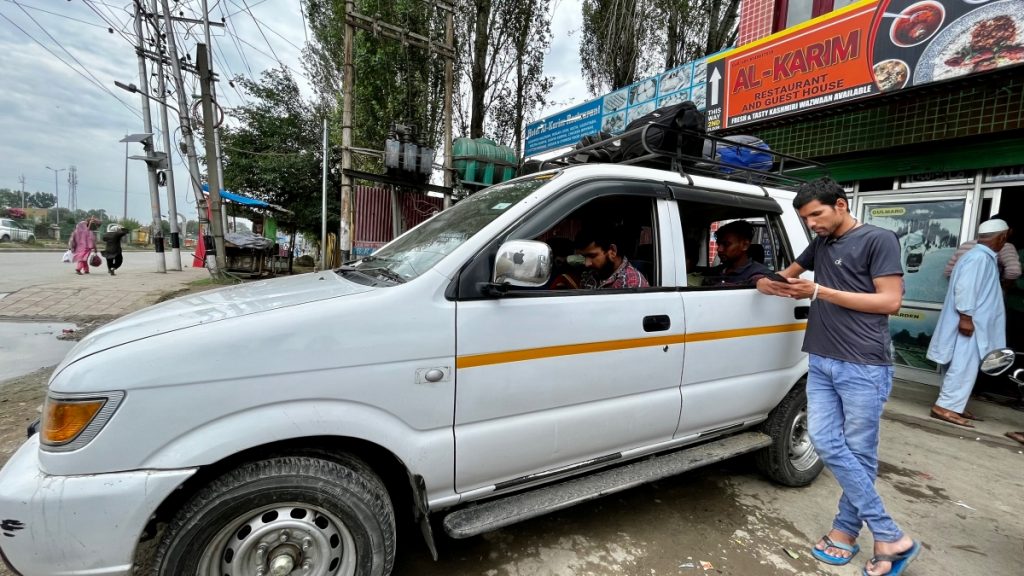 Recent data released by the Centre for Monitoring Indian Economy shows the unemployment rate rose from 7.1% in May to 7.8% in June with rural unemployment rising by 1.4 percentage points to 8% in rural India. CMIE data also shows the average monthly unemployment rate in Jammu and Kashmir from August 2019 to March 2022 as 16.37%.

Kamaluddin Ansari, 36, has been ferrying labourers from Bihar to Srinagar for ten years now. “There is so much unemployment across the country, that our labour is ready to go anywhere and everywhere. Even when they know the situation in Kashmir, their hunger brings them here,” Ansari says.

Ansari has been bringing labourers who work as masons, painters, plumbers and daily wagers of different types. “I have just arrived today from Bihar with six labourers whose ages are under 25. Desperation is pushing them to Kashmir,” explains Ansari as he stands ahead of the newly arrived group of labourers.

On being asked whether more labourers are willing to work in Kashmir after the dilution of Article 370, he remarked that unemployment has always been an issue. Such decisions, he said, don’t do any favours to the poverty-stricken or the unemployed.

“We know we’re not safe, but we earn better here, even eat better here,” says Rajender Ram who arrived in Srinagar three months ago. He worked on farms, harvesting fruits, bundling hay and was involved in basic woodwork. Apart from working in Srinagar, Ram has worked in Budgam also and has been coming to Kashmir for two years now.

Originally from Sursu, Jharkhand, Ram views the Valley as an enticing workplace. “Here, I earn double of what I earn in Jharkhand, or even when I migrated to Bihar for work,” says Ram.

Ram told The Wire that in Srinagar, his employers have not only allotted him and his fellow workers rooms to stay but also provide them with meals. All of this, he says, is a bonus as it comes free of cost – unlike in Jharkhand and Bihar. He admits that he earns Rs 18,000-20,000 a month working in Kashmir but only earns Rs 8,000 elsewhere in India. Kashmir and Kashmiris as a workplace and as employers help him save more, which he sends home.

Ram, 48, is now waiting outside the Amarnath Yatri registration desk, opposite the Yatri Transit camp at Pantha chowk. The father of four has been waiting in queue for his documents to be accepted for the pilgrimage, which takes place around July every year. The yatra is being held after three years. 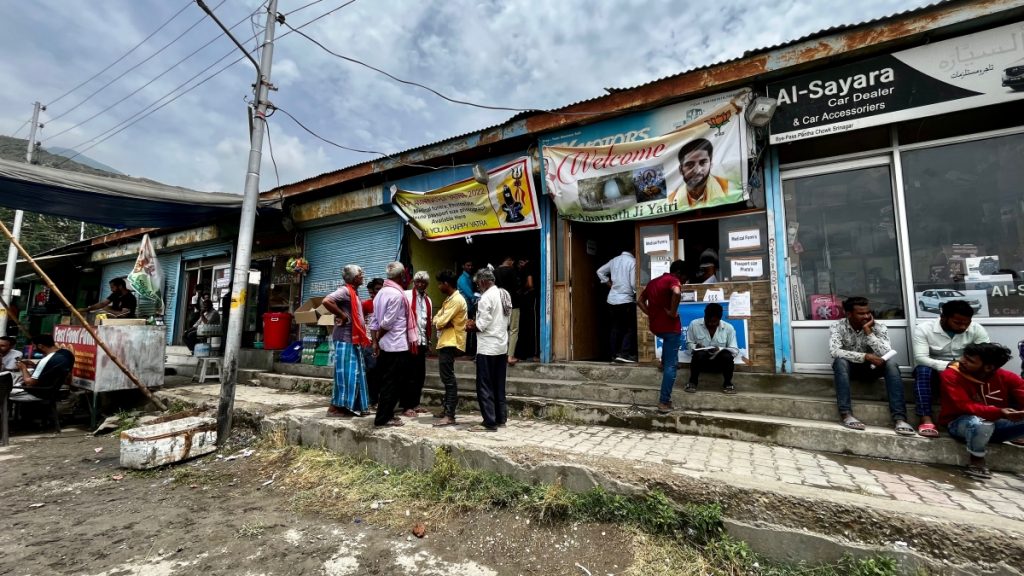 Trusting Ram’s lived experience, another labourer from Bihar followed the flock to Kashmir. This is Anand’s first visit and he has spent three months in Srinagar. He has worked as a daily wager, harvesting farm produce as well as a labourer on construction sites. After undertaking the pilgrimage, he says he wants to work here until September.

“I work here as a daily wager and had been saving up for the yatra,” says Anand, 26. Many other labourers whom The Wire met in Srinagar agreed – they earn enough to send home their salaries as well as undertake a religious pilgrimage.

Another seasonal migrant to Srinagar, Pawan Sihan, arrived in the Valley in May. He sells roasted corn in a cart in Rambagh. While other non-locals highlighted the benefits of working under Kashmiri employers, Sihan who is self-employed claims that he earns more here, even when he undertook the same occupation in his hometown Raigarh in Chhattisgarh. “Back in Raigarh, I earned Rs 200 a day selling corn. Here for the same, I earn Rs 500-600,” said Sihan.

Over the years, locals say migrant labourers have arrived in larger numbers in the Valley. They charge lesser than the local labourers. Apart from the dense presence in the construction industry, non-locals also dot tourist spots. Many push wooden carts, selling street food to cater to different taste buds. 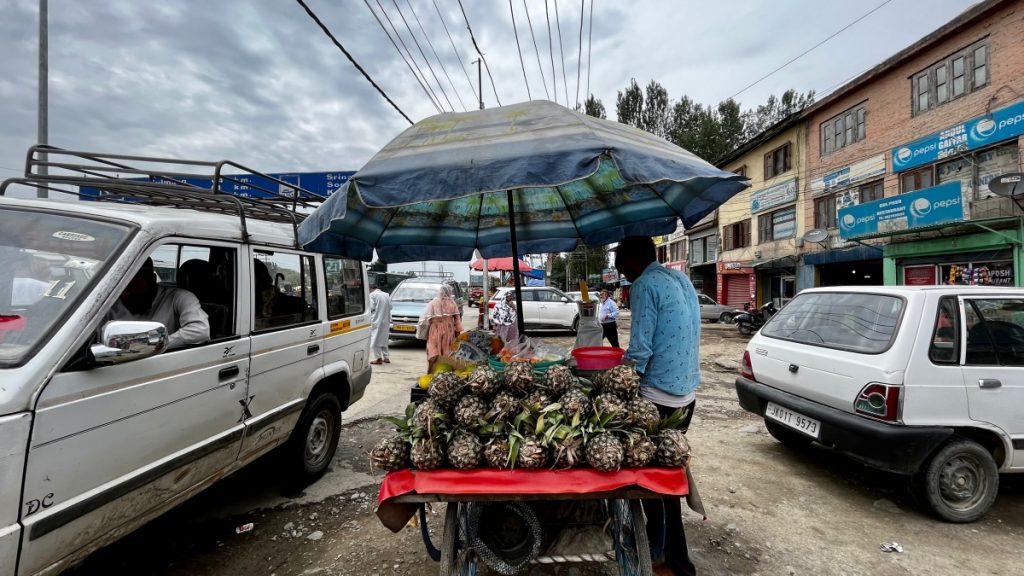 Noted Kashmiri economist Nisar Ali spoke to The Wire that every year, there is an inflow and outflow of people in search of employment. But since November 2021, he has observed a new phenomenon wherein young non-locals are visiting the valley, Jammu as well as Leh to look for better economic opportunities. These non-locals, he says, are not seasonal migrants who come to the valley as semi-skilled or unskilled labour. They assess and evaluate their prospects to engage in gainful economic pursuits and may probably have an impact next season onwards. He believes that post-August 2019, people in general have developed a psychological perception of a congenial environment, therefore, motivating the youth to explore the economic possibilities present in the region.

Understanding the current influx of non-local labourers, Ali says that it may have a negative impact on the employment prospects of locals. However, he also explains that whenever non-local labourers are faced with life threats, it doesn’t deter them from entering or staying in the Valley.

“The circumstances here for non-locals were uneasy even in the early 1990s. But after 1994, the situation does not impact them directly. But post-August 2019, there is a feeling among non-locals that they can travel freely in the Valley,” he said. He adds that even when there were attacks on non-local labourers in 2002 and 2003, it didn’t halt their movement to and within the Valley.