In Photos: The Migrant Labourers of the Industrialised Hinterland

A three-year chronicling finds that legal and social protections are still a distant reality for migrant labourers of West Bengal and Jharkhand. “Today the migrant worker experiences, within a few years, what the working population of every industrial city once experienced over generations. To consider his life – its material circumstances and his inner feelings – is to be brought face to face with the fundamental nature of our present societies and their histories. The migrant is not on the margin of modern experience – he is absolutely central to it.”
John Berger

In the summer of 2015, I got an opportunity to travel across the states of West Bengal and Jharkhand to photograph the struggles of migrant labourers from the area. A portrait of the working class labour in the region. Jharkhand , 2018.

Migrant workers travel to places they can find employment. Some, just for a season before returning home. Others, from city to city, constantly looking for work. Open cast mines are an example of human greed, leaving behind nothing but rubble, stone and fire. Kankanee Colliary, Jharkhand, 2015.

My journey took me through many regions of Eastern India which come under consistent pressure to fulfil the demands of a vast and rapidly developing country and its dependency on fossil fuels. It is a bleak and naturally striking setting: poverty-stricken, remote and forgotten people and their struggles in the face of a lucrative future.

The black diamond express connects all important coal mines and steel cities of eastern India between Howrah and Dhanbad. The incessant mining and the underground fire that has been burning here for almost a century has contaminated everything: the soil, the water and the air. 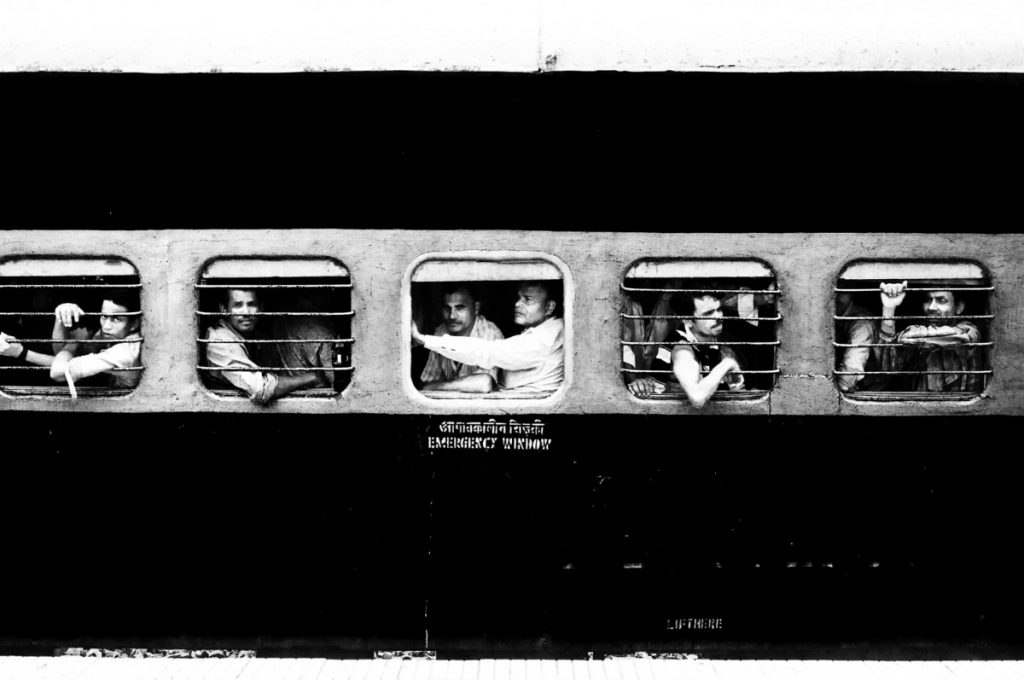 The Black Diamond express runs between the rail routes of Dhanbad and Howrah, connecting the most important coal districts. Wariya, Jharkhand, 2016. 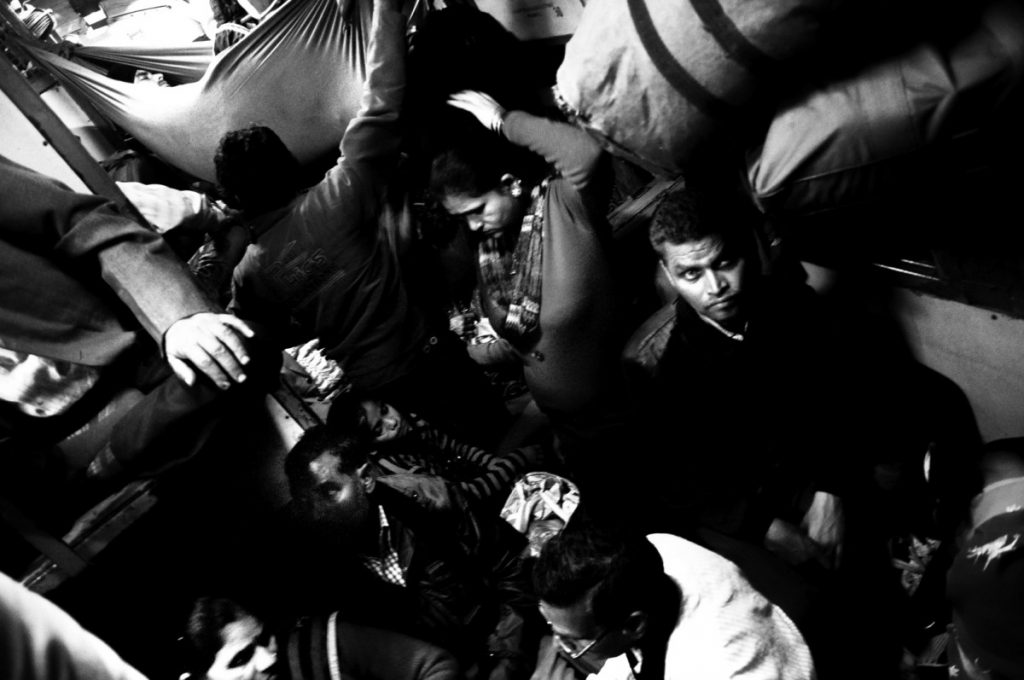 General compartments on these trains are over-crowded with migrating passengers mostly moving in search of work. Jharkhand, 2016.

Kankanee colliery is an example which has caused continuous unstable grounds over the years. At stake are the health and lives of thousands who live in the area. The extremely important railway link between Adra and Gomoh also passes over the underground fires. 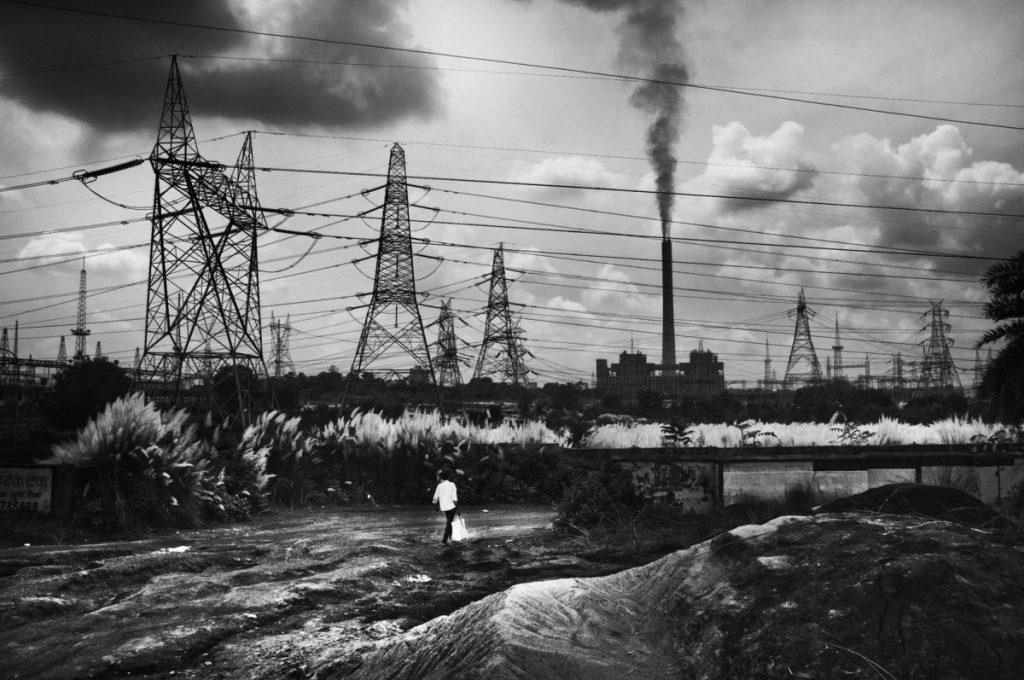 The industrial worker reeks of a futile narrative in his very being. The overly polluted steel industry in Raghunathpur. Jharkhand, 2016. 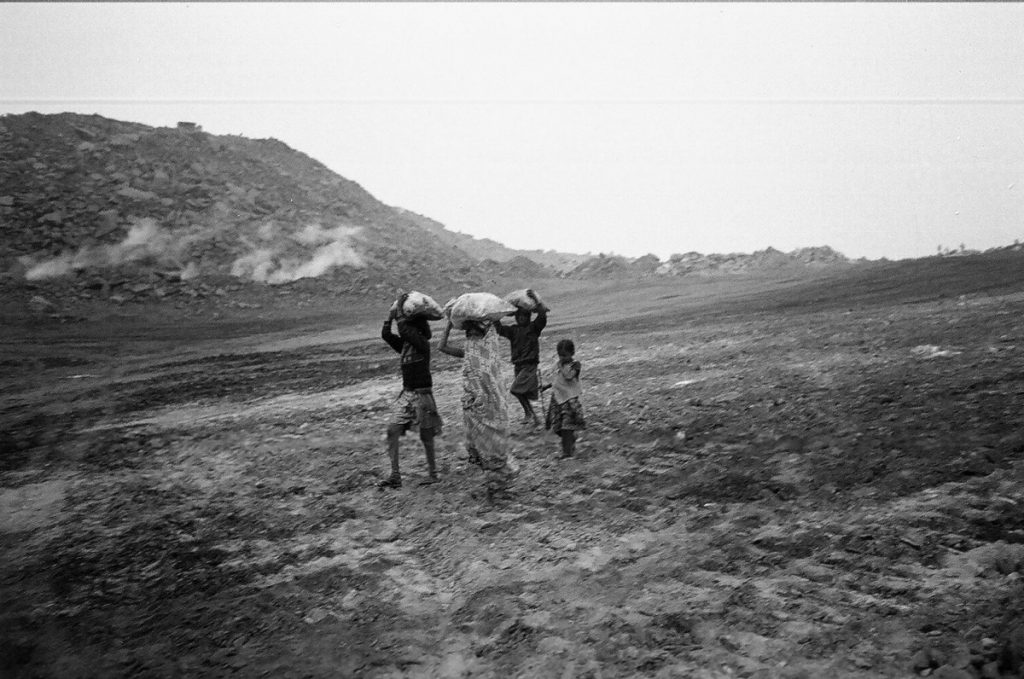 A family of four scavenge for their daily requirement of coal from the leftovers of an open-cast blast in Jairampur. Jharkhand, India. June 2015.

The ground reality is that the migrants’s distress is enormous. A basic overview of this complex phenomenon makes clear that in spite of the vast contributions that migrants make to India’s economy, their social and legal protections remain sparse. 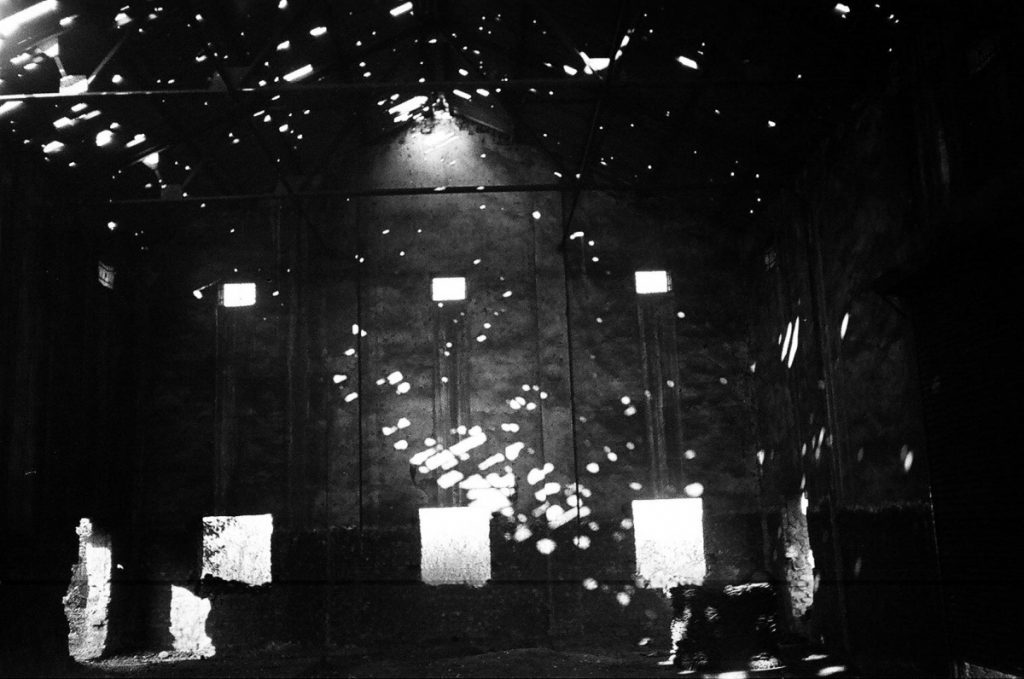 The massive mining industries leave behind expanses of non functioning factories, changing the landscape of a once adivasi tribal district. Jharkhand, 2016. 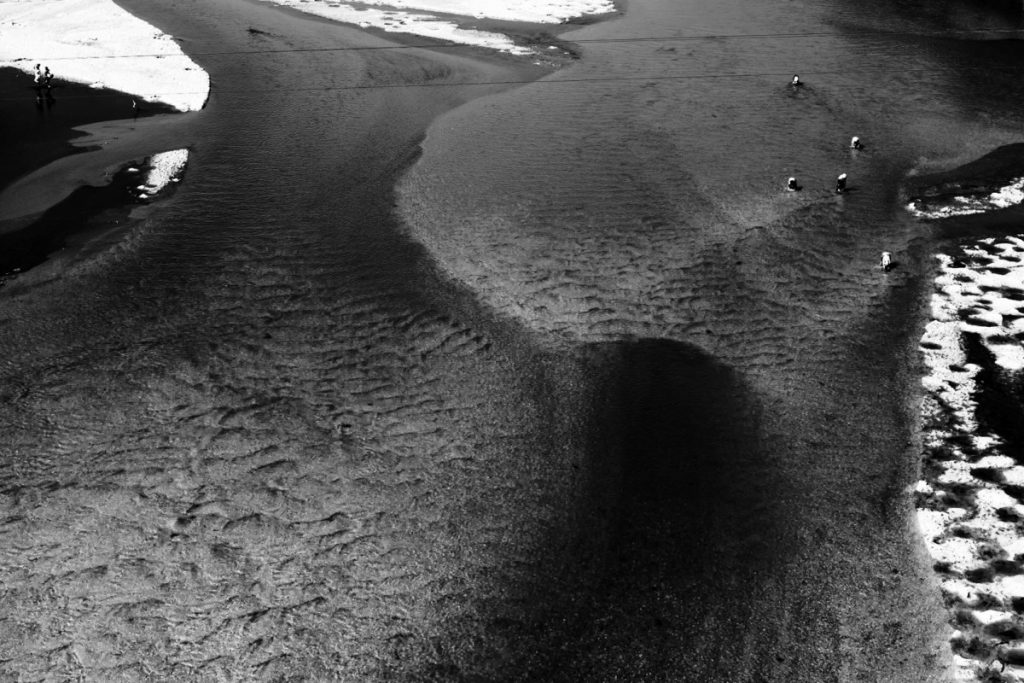 Workers scavenging for coal at the base of the river bed near the Telmachho Bridge. Jharkhand, India. February 2016.

There needs to be a concerted national strategy that ensures urban integration of migrants and their access to basic entitlements and work conditions. These are important pathway to social progress. 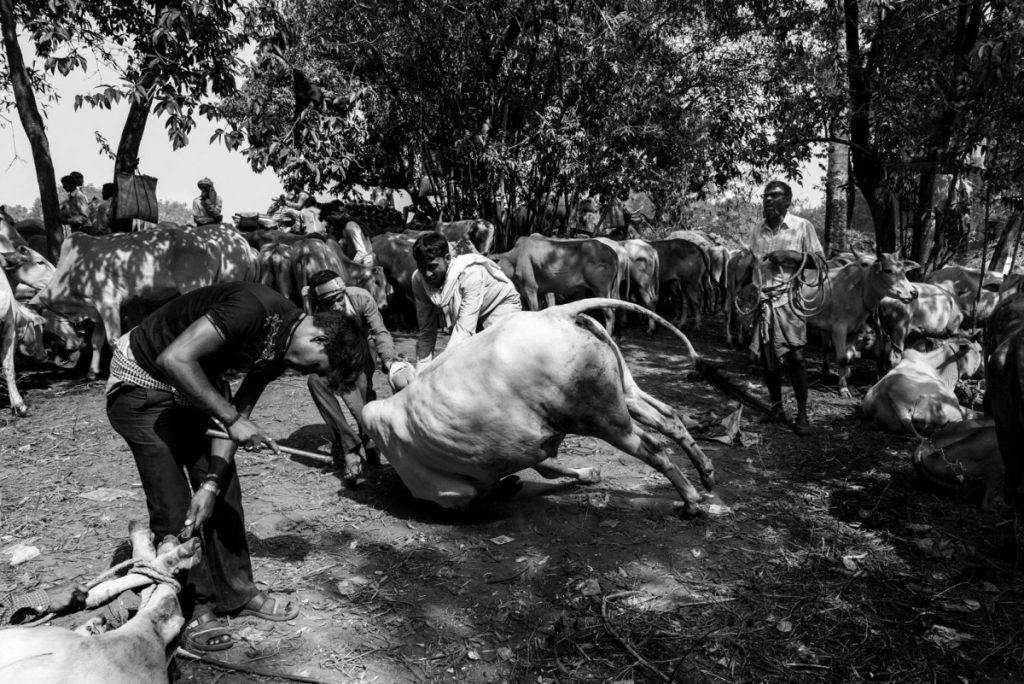 With the increase in cow vigilantism and an agrarian crisis, sustainable businesses are on the decline. A weekly cattle bazaar. Chas, Jharkhand 2018. 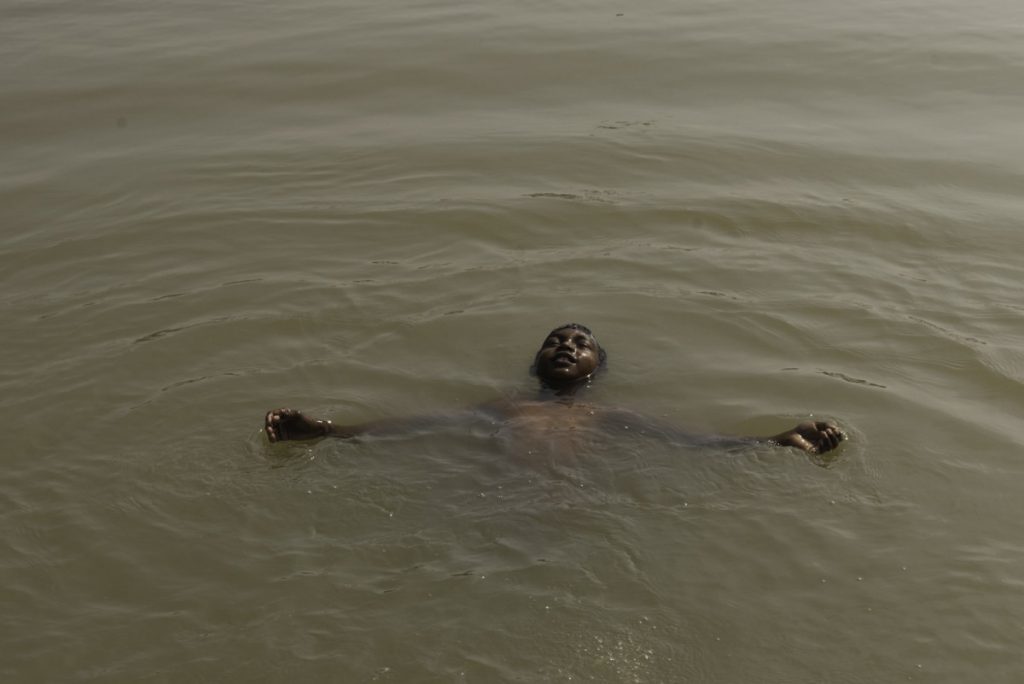 A boy takes a dip in the nuclear waste tailing ponds of Turamdih, Jharkhand, 2017.

All photos by Abhishek Basu.

Abhishek Basu is a freelance photographer based out of Jamshedpur , Jharkhand. He is currently working with different forms of digital publishing.