GST Impact: Hundreds of Thousands Lose Their Jobs Even as Economy Grows

While big firms have shaken off the effects of the change and are set to gain from a uniform tax regime, small businesses across the country are still hurting. 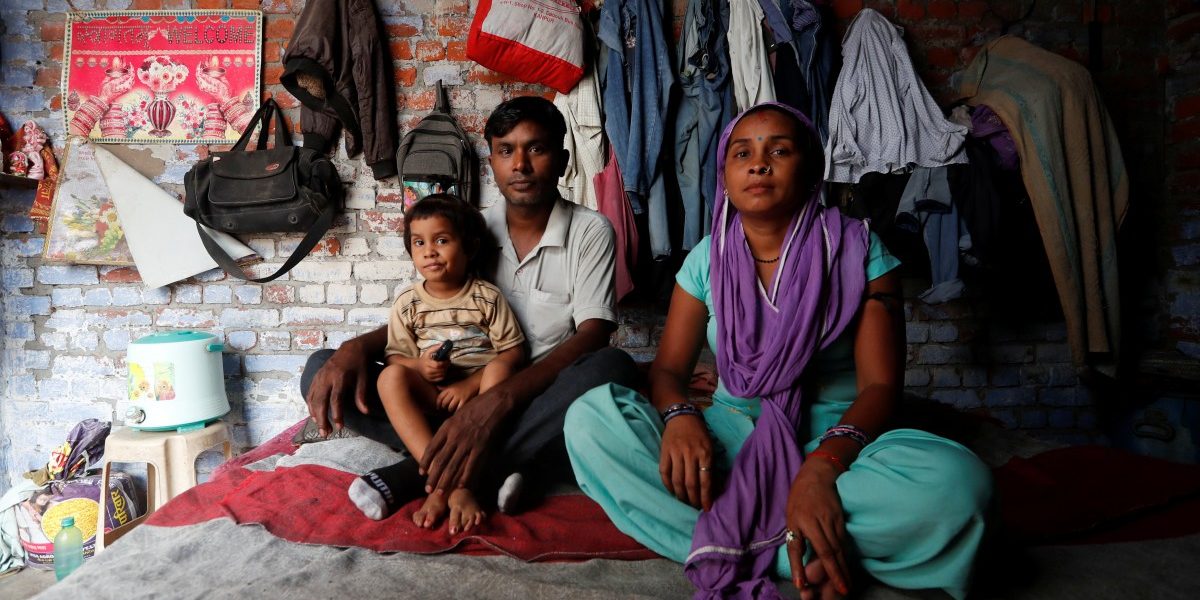 Ram Pratap who lost his job as a powerloom operator earlier this year, poses for a portrait with his wife and daughter inside his house in Panipat in the northern state of Haryana, India, August 24, 2018. After losing his job as an operator, Pratap started working as a clerk and a caretaker at another weaving factory. "I got a room for my family inside the factory. My new boss is a really good man. If he didn't support me, it would be really difficult to stay in this city and survive. I have two kids and I can't afford the rent now," he said. "It's a very bad phase for this industry. Many of my friends have left. Most of them have returned to their villages and some moved to different cities for jobs." Pratap said he used to earn $300 per month and now only earns half of that. Credit: Reuters/Adnan Abidi

Panipat: Tilak Raj Bathla’s tiny weaving factory is one of the few still humming on a once busy road in Panipat, known as the country’s “textile city”.

Nearby, more than two dozen other workshops are locked from the outside, while dogs and cows roam through other abandoned factories. Scrap dealers enquire about idle powerlooms.

The Narendra Modi government launched the Goods and Services Tax (GST) just over a year ago, India’s biggest ever tax reform, aiming to replace more than a dozen federal and state levies and unify the sprawling economy.

The move improved economic efficiency but critics say the complexities of the new regime have driven many small enterprises out of business and forced hundreds of thousands out of jobs.

For Prime Minister Narendra Modi, the drawbacks of the GST, especially the job losses, could prove costly in major state elections later this year and a general election in mid-2019.

Bathla says his neighbours, most of them unschooled, could not comply with monthly online filings required under the GST regime. Some of his customers and suppliers could not afford to hire accountants to navigate a system which has been amended more than 200 times already, while others struggled to cope with delays in tax returns caused by glitches in the centralised software. 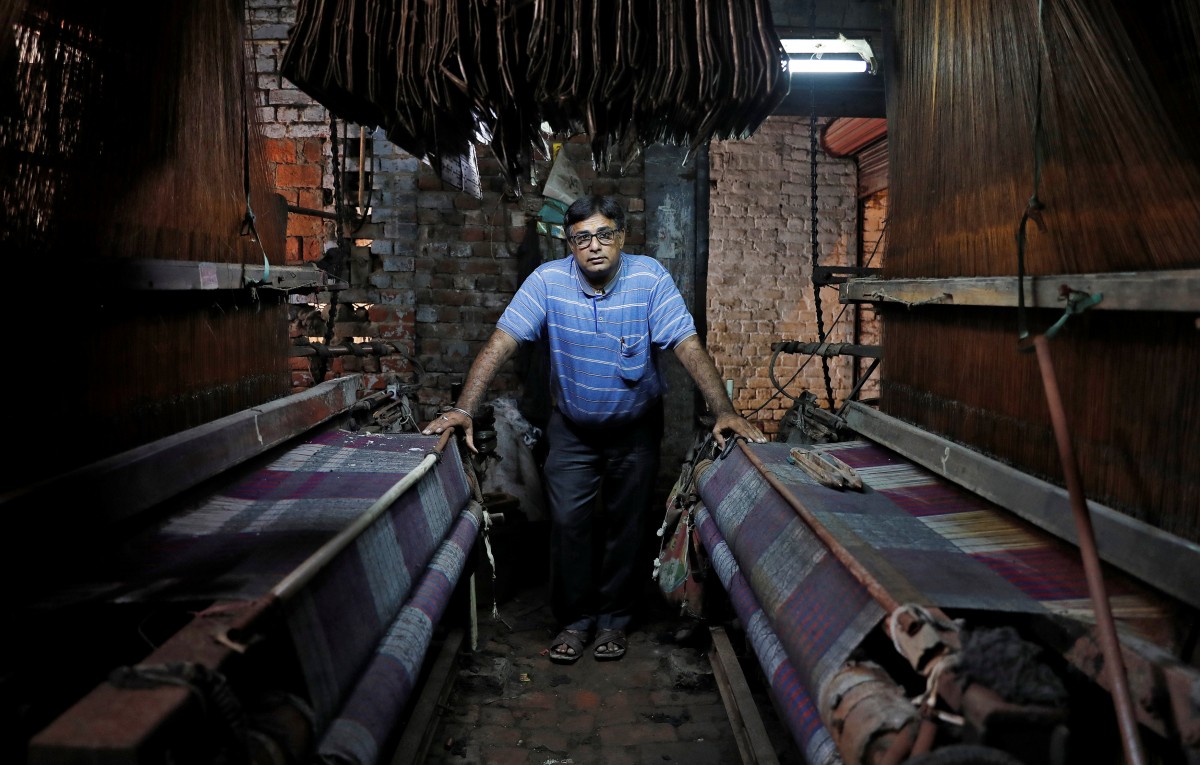 Tilak Raj Bathla, 50, owner of a weaving factory, poses for a picture at a closed section of his factory, in Panipat in Haryana, India, August 29, 2018. Credit: Reuters/Adnan Abidi

“I have a GST registration, but I can’t work as my vendors and buyers are unable to comply with a complex tax structure,” the 50-year-old said, adding his monthly sales had fallen to about Rs 250,000 from about Rs 1 million before the GST. Only two of his 10 powerlooms are currently being used.

The government has said it is simplifying the tax measure to make it accessible to everyone. Finance ministry spokesman D.S. Malik said requests from small businesses have been considered “from time to time.” But he declined to comment on job losses.

Nevertheless, India’s economy gathered pace in the April-June quarter, expanding 8.2% compared to 5.6% in the same period a year earlier. Economists said the number was coming off a low base as companies held off production in the year-ago period ahead of the implementation of the tax measure in July last year.

But while big firms have since shaken off the effects of the change and are set to gain from a uniform tax regime, small businesses across the country are still hurting.

A survey by the All India Trade Union Congress (AITUC) in July found that a fifth of India’s 63 million small businesses – contributing 32% to the economy and employing 111 million people – faced a 20% fall in profits since the GST rollout, and had to sack hundreds of thousands of workers.

Readymade garments, gems and jewellery, leather, handicraft and basic machinery manufacturing are hit the most, industry bodies from across the country say. 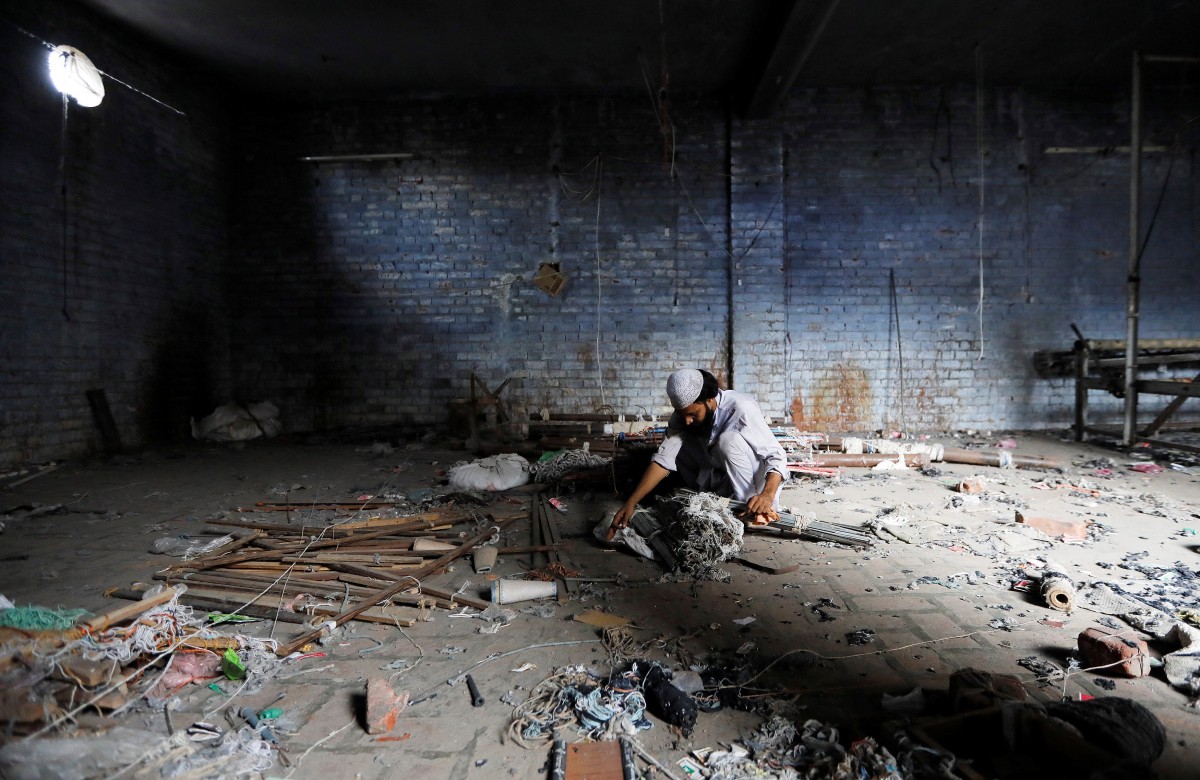 A scrap dealer searches for useful material at a weaving factory, that was shut a year ago, in Panipat in Haryana, India, August 29, 2018. Credit: Reuters/Adnan Abidi

According to estimates by the Centre for Monitoring Indian Economy, a Mumbai-based consultancy, nearly five million workers lost their jobs over the past year. But it was not clear how many were from small enterprises.

India’s unemployment rate rose to 6.4%in August from 4.1%in July last year despite an additional 17 million people joining the workforce.

But it did not give data on how many people were laid off or from which industries.

More than 50 workers and factory owners Reuters spoke with in Panipat, about 90 km north of New Delhi, said over a third of the city’s 10,000 weaving units had closed or curbed production. 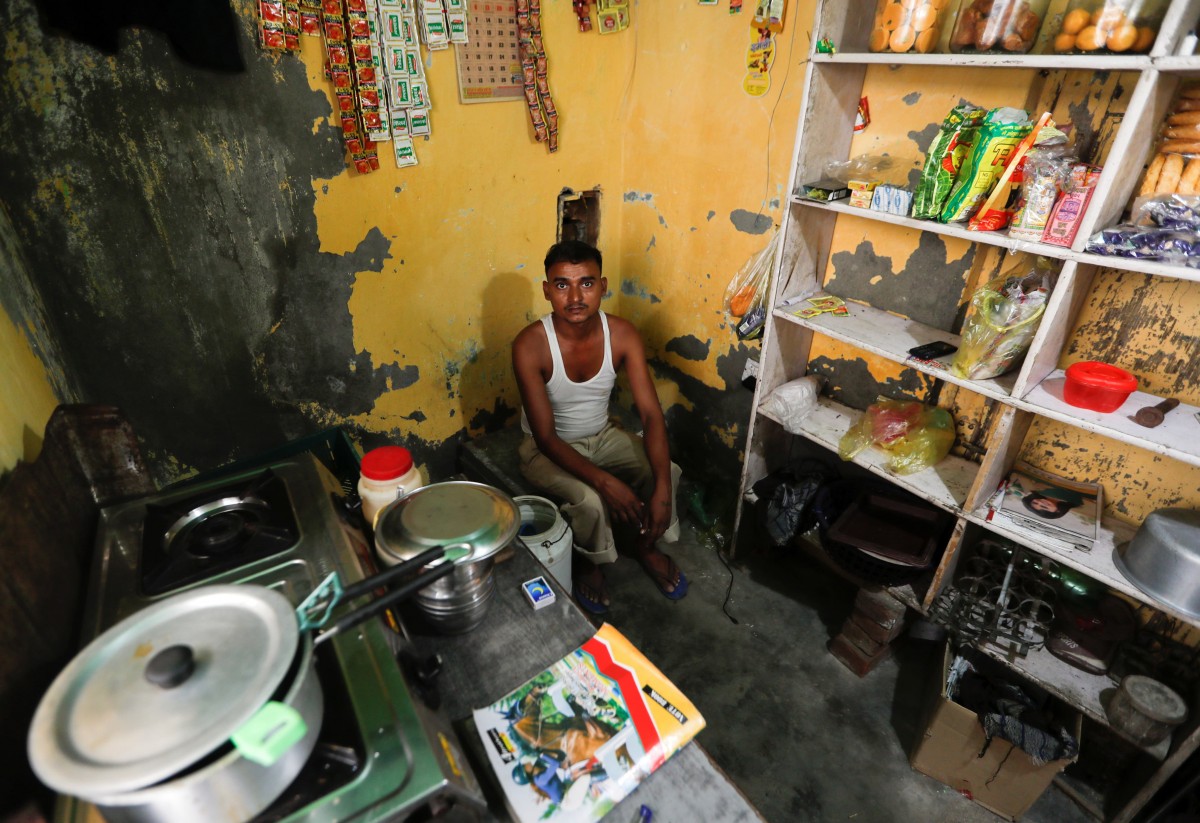 Raj Narayan, who lost his job as a powerloom operator earlier this year, sits inside his tea shop in Panipat in the northern state of Haryana, India, August 24, 2018. Narayan said he was earning $250 to $300 per month. After losing his job, he opened a tea stall. “I sent my family back to the village because I am not earning like I used to and it was getting very difficult to support them and bear the expenses,” Narayan said. Credit: Reuters/Adnan Abidi

Chand Multani, president of the Panipat Handloom Owners’ Association, pointed to the tax headaches behind a bedsheet that costs barely $2 dollar as an example.

The weaving of the sheet, its dyeing, ironing, embroidering and packaging are all done by separate businesses. Under the new system, each business has to pay GST at each stage of production which the businesses can claim back provided they have registered with tax authorities and have a GST number.

For a lot of small businessmen this is way too much work. “How can all these different operations comply with tax rules?” asked Multani, waving the sheet in the air.

The GST replaced several federal and local taxes and tore down tariff barriers between India’s 29 states, but critics say that has been to the benefit mainly of large, nationwide businesses. 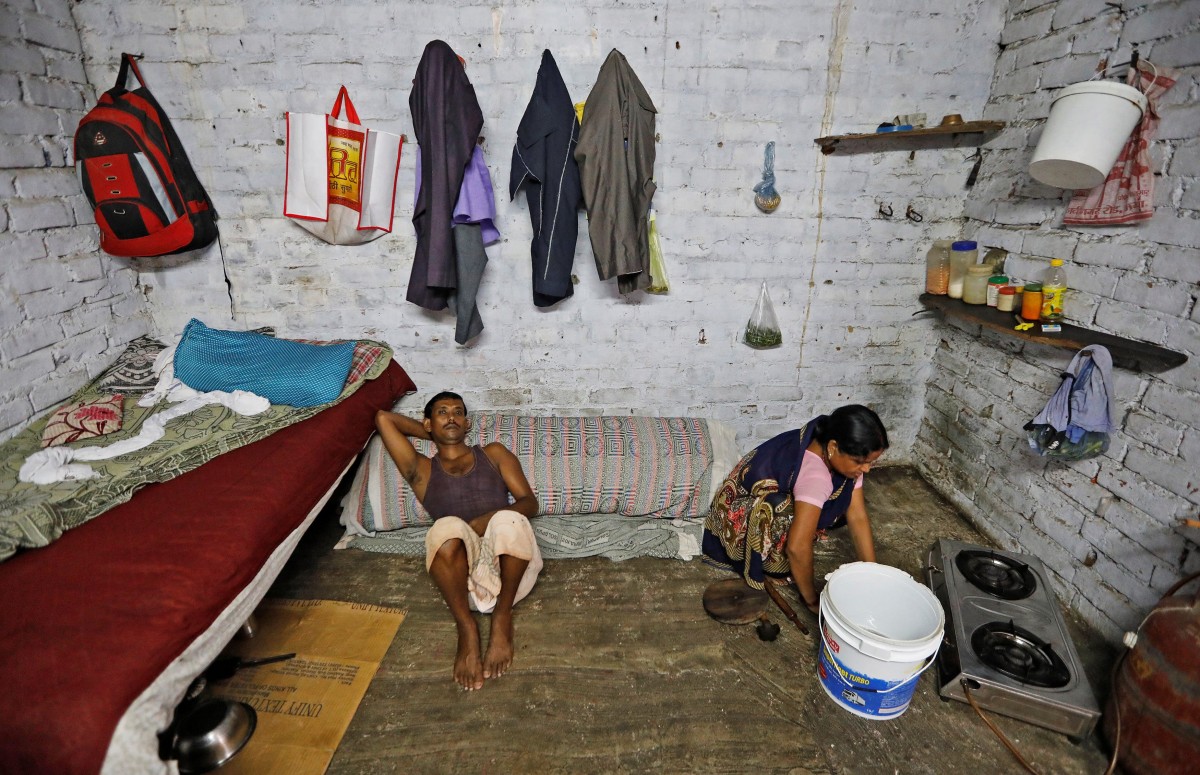 Ram Gati (L) who lost his job as a powerloom operator earlier this year and now works as a packaging labour, lies inside his quarters as his wife cleans the floor, in Panipat in the northern state of Haryana, India, August 29, 2018. Gati said he is not earning much money now. He is thinking of going to a different city to find another job or start a small business from his savings. Credit: Reuters/Adnan Abidi

Modi, in an Independence Day speech on Aug 15, said the businesses that faced “teething difficulties in adopting GST had accepted the challenge and the country is now moving ahead.”

But Rahul Gandhi, his main challenger in next year’s election, has zeroed in on the job losses and shuttered businesses.

“This GST is a way of removing money from the pockets of the poor,” he said last month. “This is not GST, this is Gabbar Singh Tax,” he said. 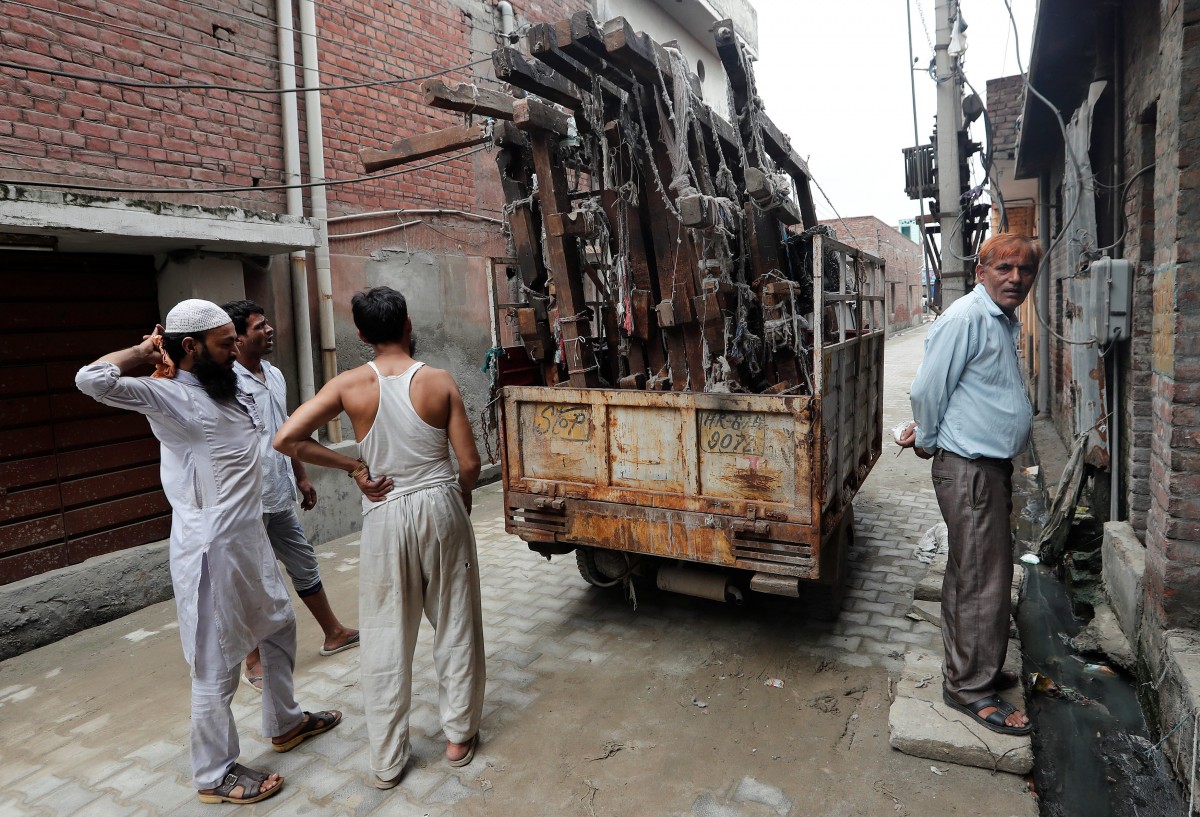 Scrap dealers load dismantled powerloom machines outside a weaving factory, that was shut a year ago, in Panipat in the northern state of Haryana, India, August 29, 2018. Credit: Reuters/Adnan Abidi

To address grievances, the GST Council, which administers the tax measure, has approved more than 200 amendments since the law came into force.

M.S. Mani, senior partner at Deloitte, said too many changes to rules and rates were damaging, particularly for small businesses.

The Federation of Indian Export Organisations estimates that nearly $2 billion of tax credits, mainly of small exporters, were yet to be refunded, mainly because of software glitches in the system and the difficulties in matching the hundreds of thousands of invoices.

About 230,000 small businesses have closed down due to compliance and cash flow problems, leading to large-scale job losses, said Amarjit Kaur, national secretary of the All India Trade Union Congress.

“GST has proved a death warrant for us,” Ravinder Kashyap, 22, who lost his job as a powerloom operator earlier this year, said in a small rented room in Panipat that he shares with four friends.

He said his employer had lost sales orders because of the mess caused by the tax and so had let him off along with scores of others. “If this carries on for one or two years, we’ll have to commit suicide.”