The education department has ordered that contractual school teachers will be paid according to a ‘no work, no pay’ policy. The problems of 4.5 lakh striking teachers, who are already financially stressed, have deepened. 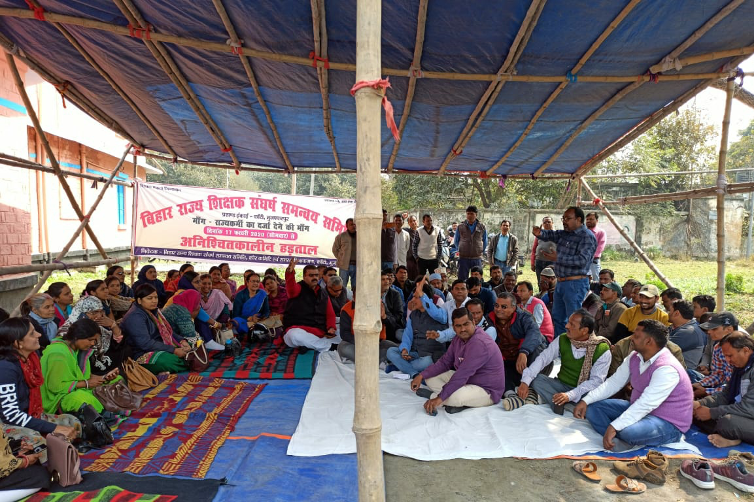 Patna: At a time when Bihar, like the rest of the country, is in lockdown mode, faced with an unprecedented public health emergency triggered by the COVID-19 pandemic, the face-off between the state government and nearly 4.5 lakh contractual school teachers, who have been on indefinite strike since February 17, continues unabated. In fact, the woes of the contractual teachers, whose demands include equal pay for equal work and regularisation as state employees, have deepened.

Last week, the state education department issued an order to all district education officers (DEO) and district programme officers (DPO) to strictly abide by the ‘no work, no pay’ policy for contractual teachers while disbursing salaries. As per the order, those who left the strike to rejoin work would be paid, but only for that period. In the two months that the contractual teachers, or ‘niyojit shikshak’, have been on strike, nearly 400 of them have been suspended across districts such as Patna, Gopalganj, Begusarai and Kaimur. Some have also been dismissed on charges of indiscipline and have had FIRs registered against them. The strike has been declared ‘illegal’ by the state government.

Reacting swiftly to the order, the Bihar Rajya Shikshak Sangharsh Samanvay Samiti (BRSSSS) – an umbrella organisation of 26 unions – which is spearheading the strike and the Bihar Secondary School Teachers’ Association (BSSTA) have urged the state government to keep in mind the exceptional scenario of the pandemic, which presents a grave threat to the lives of all, and pay contractual teachers their salaries.

Now The Wire has accessed a list prepared by the BSSTA, which claims that at least 42 contractual teachers have lost their lives during the strike period. A majority of them died of heart attack and haemorrhage as they were not in a position to pay for their treatment, according to the BSSTA (the first part of the list, containing the details of 15 such teachers, is reproduced below). 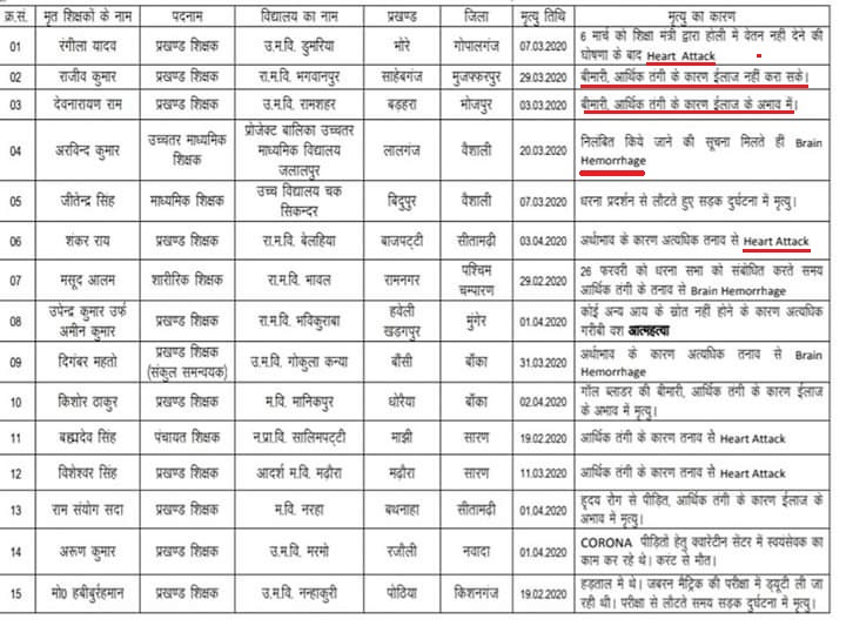 BSSTA general secretary Shatrughan Prasad Singh said, “The families of contractual workers on strike are already under immense financial strain. We have asked the state government and education minister to provide them salaries during this pandemic crisis.”

As far as the list of the 42 deaths compiled by the organisation is concerned, the reaction of the chief additional secretary of the education department, R. K. Mahajan, has been dismissive.

The convener of the BRSSSS, Brajnandan Sharma, told The Wire in a telephonic conversation that it was the unfair treatment of contractual teachers by the state government in the first place which had led to the ongoing strike. “It does not give us any pleasure; in fact, we have to suffer a great deal of hardship when we go on strike. Now, in addition, all of us are facing a grave health threat because of the pandemic. That is why the government must pay contractual teachers their salaries during this public health emergency.”

Sharma made it a point to mention the March 23 advisory put out by the Union Ministry of Labour and Employment, asking all public and private establishments to refrain from sacking contractual workers or cutting their wages during the challenging period of the lockdown. How can the state government take the decision it has, he asks.

Abhay Kumar, a member of the BRSSSS, finds it difficult to talk about the death of Rajiv Kumar, a middle school teacher in Sahebganj, Muzaffarpur, 1.5 months ago. Since he was the sole bread-earner, his death has pushed his family into acute financial distress. “We are bringing these details out in public not to defame the state government but to draw attention towards our plight,” says Abhay Kumar.

The state’s largest opposition party, the Rashtriya Janata Dal (RJD), has also appealed to the Bihar government to reconsider its position of no work, no pay. Talking to The Wire on the phone, RJD spokesperson and Rajya Sabha MP Manoj Jha said, “The entire discourse during the lockdown has been essentially urban and middle class centric. At a time of such deep crisis, the Bihar government’s decision is objectionable.”

The leader of opposition, Tejashwi Yadav, also echoed similar sentiments asking the state government to refrain from discriminating between contractual teachers who continue to be on strike and those who had returned to work at such a delicate time.

As regards the larger question of the contractual teachers’ demands and the state’s response to it, an official of the education department speaking on condition of anonymity said that while the state government had given the striking teachers an option of joining the service, it was not willing to  accept their demand of pay parity.

Moreover, the absence of any terms and conditions governing the service of the contractual teachers is the biggest roadblock to a resolution of this issue. Without formal rules of service, pay parity seems unlikely.

The fact that the Supreme Court, in May 2019, set aside the Patna high court order of 2017 that had upheld the teachers’ demand of equal pay for equal work, places the state government in a position of strength vis-à-vis the contractual teachers.

Pandemic or no pandemic, the problems of the contractual teachers don’t show any signs of being resolved anytime soon.