This one-day strike is expected to affect production at Coal India Limited by around 1.5-2.5 million tonne.

Nearly five lakh workers are understood to have taken part in the token strike across India. Photo: By special arrangement

New Delhi: Around half a million coal mine workers went on strike on Tuesday, September 24, to protest against the central government’s move to allow 100% Foreign Direct Investment (FDI) in coal mining and associated infrastructure under the automatic route.

Trade unions claim the strike, that began at 6 am, has been near total. This one-day strike is expected to affect production at Coal India Limited (CIL) by around 1.5-2.5 million tonne. A Rs 400-crore loss in revenue has been estimated.

Economic Times has reported that the strike is also expected to hit power supply, “as plants with thousands of megawatts of generation capacity have fuel stocks only for a day or lesser.”

“The strike was successful. Barely 1-2% attendance was registered, that too for just emergency services like security, medical staff or pump operators. Rail and road transport of coal is totally halted. As many as 2.7 lakh permanent and another around 2.25 lakh contract workers have participated in this,” D.D. Raamanandan of All India Coal Workers Federation told The Wire. 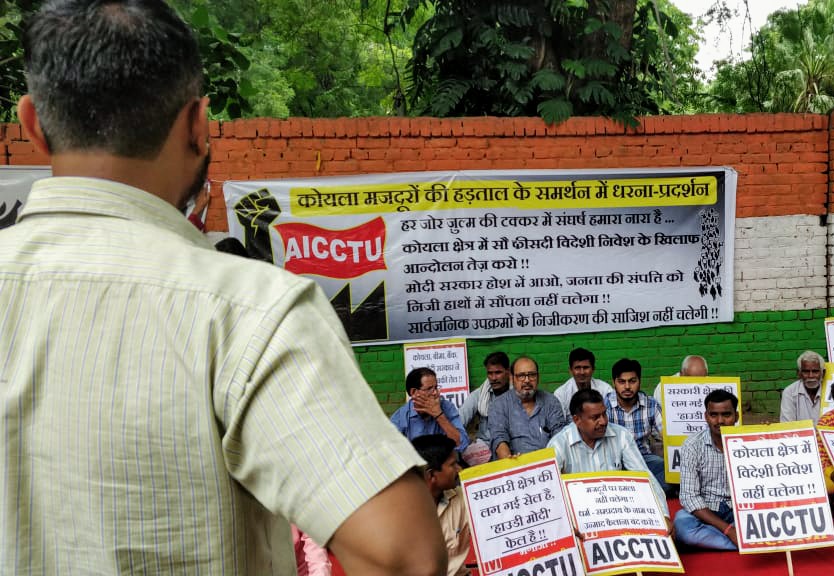 A solidarity protest demonstration was also organised by the All India Central Council of Trade Unions (AICCTU) at Jantar Mantar in New Delhi on Tuesday.

“Even after it has paid thousands of crores in dividends and reserves [more than 1.2 lakh crores in the last decade], the government is going full throttle to privatise the strategic coal sector. This will not only jeopardise the future of government owned coal companies and its lakhs of employees but also lead to the loot of people’s resources at the hands of private miners, followed by lesser revenues for the government,” a statement by AICCTU said.

The primary demand of the striking workers is that the government withdraw the 100% FDI from the coal sector through the automatic route. FDI raisesC fears of workers losing benefits as private companies would look to cut production costs at the expense of the security and benefits currently provided to workers.

Coal at low costs from private players, workers fear, would make CIL uncompetitive and also increase precariousness for them as it will encourage “slaughter mining”. Permanent workers fear that they will be replaced by or be reduced to contractual workers, who are extremely vulnerable in the coal sector and lack any social security or benefits.

Other demands include that all subsidiaries of CIL such as ECL, BCCL, CCL, CMPDI, SECL and MCL should be merged into CIL and it should be made a national single company.

Another demand is that coal mining through contractors, outsourcing, mining developers and operators should be stopped and workers who are engaged or deployed in mining activities should be regularised and treated as workers of CIL. Workers have been worried about losing all security and benefits under FDI. Photo: By special arrangement

Mining unions claim that new recruitment has also been unofficially halted on the directions of the government. They demand that all types of employment should be resumed – including employment to dependents in cases where a worker dies or becomes unfit due to occupational diseases or workplace accidents and employment against land.

The one-day strike is a ‘token action’ and the unions said they will intensify their agitation if their demands are not met.

“Although it has been termed as FDI but they’ll come with very little money. Either directly or through some Indian companies. The existing large mines will be leased out to them. While the entire existing infrastructure, heavy machinery, land and environmental clearances etc. are ours, they’ll take the profit back to their countries in the name of FDI,” S.Q. Zama, secretary-general at Indian National Mine Workers’ Federation, told The Wire.

Zama works at Western Coalfields Limited (WCL), Nagpur where he claimed the strike was “100% successful”.

Ten central trade unions have also supported today’s strike. “Even though the strategic workers such as pump operators, etc. will be exempted from striking as per the decision of the federations, the central trade unions are confident that about five lakh workers of 600 establishments, including 470 mines, will be ceasing work on September 24,” their statement said.

The strike notice was issued by five mining workers’ unions operating in CIL, state-owned coal companies and the Singareni Collieries, Telangana. The RSS-affiliated Bharatiya Mazdoor Sangh (BMS) did not participate in the joint strike call by the five unions but issued a parallel five-day strike notice starting Monday (September 23-27).

“We issued our strike notice on September 5 while they issued it on September 8 just to save face among workers,” Zama told The Wire. Initial reports indicate that the BMS strike failed to make a significant dent in overall production on Monday as just 10-12% of the workers refrained from duty.