Experts call this a repackaging of old pension schemes and are unsure of how it will integrated into the existing ecosystem. 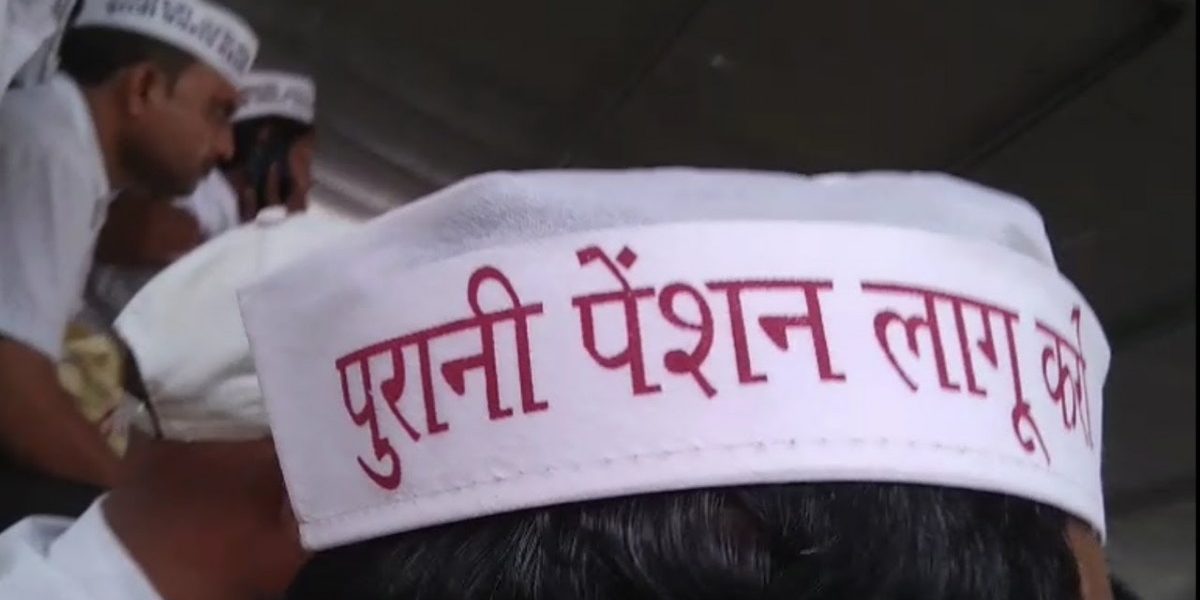 A protest against the new pension scheme. Credit: YouTube

New Delhi: A ‘mega pension scheme’ announced by acting finance minister Piyush Goyal in his budget speech on Friday is being hailed as one of the major announcements by the Narendra Modi government.

The contribution-based and voluntary ‘Pradhan Mantri Shram-Yogi Maandhan’ assures a monthly pension of Rs 3,000 after workers attain the age of 60. A monthly contribution of Rs 100 for those who join the scheme at the age of 29 and Rs 55 for those joining at 18 will be matched by the government and the total sum added to their pension account.

“Half of India’s GDP comes from the sweat and toil of 42 crore workers in the unorganised sector working as construction workers, rickshaw pullers, rag pickers, street vendors, agricultural workers, beedi workers, leather, handloom etc. Domestic workers are also significant in number. We must provide them a comprehensive social security coverage for their old age,” Goyal said before outlining the pension scheme.

Five hundred crore rupees has been allocated for the scheme and can be increased if required. It will be implemented from the current year itself.

This is in addition to the existing health coverage provided under Ayushman Bharat and life and disability coverage under Pradhan Mantri Jivan Jyoti Bima Yojna and Pradhan Mantri Suraksha Bima Yojana. “We estimate that at least 10 crore unorganised sector workers will benefit from this, and it might emerge as world’s largest pension scheme in the next five years,” Goyal added.

How is it different from the Atal Pension Yojana?

Atal Pension Yojana (APY), another defined pension scheme for unorganised workers not covered by any other statutory social security schemes was announced by Arun Jaitley in 2015 and offers similar incentives. Many argue that the new ‘mega scheme’ is just an extension of APY.

There are also various penalties, including closing of the pension account, if the subscriber defaults on contributions.

However, no such details have been provided for the Pradhan Mantri Shram-Yogi Maandhan, leaving experts wanting more details.

Many labour activists also argue that providing pension is the government’s responsibility and no matter how small the contribution, workers shouldn’t be made to pay for it at all.

Tapan Sen, general secretary of the Centre of Indian Trade Unions (CITU), says it’s just a declaration of intent and was premature of Goyal to make tall claims about it.

“What is the minimum year of contribution to receive pension? Unorganised workers are not continuously employed so what happens if there is a break in contribution? Will the government compensate for it? How will they be registered when they are frequently changing employment?” Sen told The Wire.

Calling the budget “election oriented,” Amarjeet Kaur, general secretary of the All India Trade Unions Congress (AITUC), accused the government of “camouflaging” existing pension schemes and throwing around statistics that sound good. She argues that the EPFO already provides pensions to unorganised workers under various such schemes, and if the government doesn’t have a clear strategy to expand coverage or increase the amount, there’s nothing new to add.

“The demand of these workers is Rs 7,000 and above as monthly pension for a dignified livelihood,” she told The Wire.

The unorganised sector in India employs over 94% of the total labour force. With increasing contractualisation, most of these workers have little access to social security schemes like PF or ESI. According to many reports, most unorganised workers in the informal sector are not on formal payrolls and, hence, denied any social security, including pension. Many employers in the MSME sector often dodge labour laws on social security by showing fewer employees on their payrolls than legally required to cover them under EPFO or ESIC.

Implementation of this new pension scheme is hence going to be a challenge since many of these workers don’t even exist on paper.

Santosh Mehrotra, professor at the Centre for Informal Sector and Labour Studies in Jawaharlal Nehru University, calls this a clever sleight of hand that offers nothing new.

“Just like Ayushman Bharat was an extension of RSBY (which was in place for 10 years), this is also an expansion of Atal Pension Yojana,” he told The Wire. He also questioned the Rs 500 crore allocation for this scheme, calling it “peanuts.”

Drawing parallels with the New Pension Scheme (NPS) for government employees, he says the best part about it was that it was mandatory and not voluntary. “Nowhere in the world has a voluntary scheme for social protection of workers been effective,” he said.

“If the government is serious about it, this should have been a statutory law and not a scheme that could be thrown out by successive governments. Meaningful social insurance for unorganised workers will work only if it is statutory and mandatory.”

Most other announcements by Goyal regarding unorganised workers i.e., bonus, gratuity, ESI eligibility cover, honorarium to Anganwadi and ASHA workers etc., are not new provisions and have already been implemented after multiple protests demanding the same.

With such lack of clarity on implementation and without setting up a new body dedicated to identifying workers in the unorganised sector and enrolling them into the scheme, trade unionists say providing such social security cover to them is going to remain a pipe dream.