This is the largest number of workers from the formal and informal sector to go on strike against the "anti-people" and "anti-worker" policies of the BJP-led Central government. 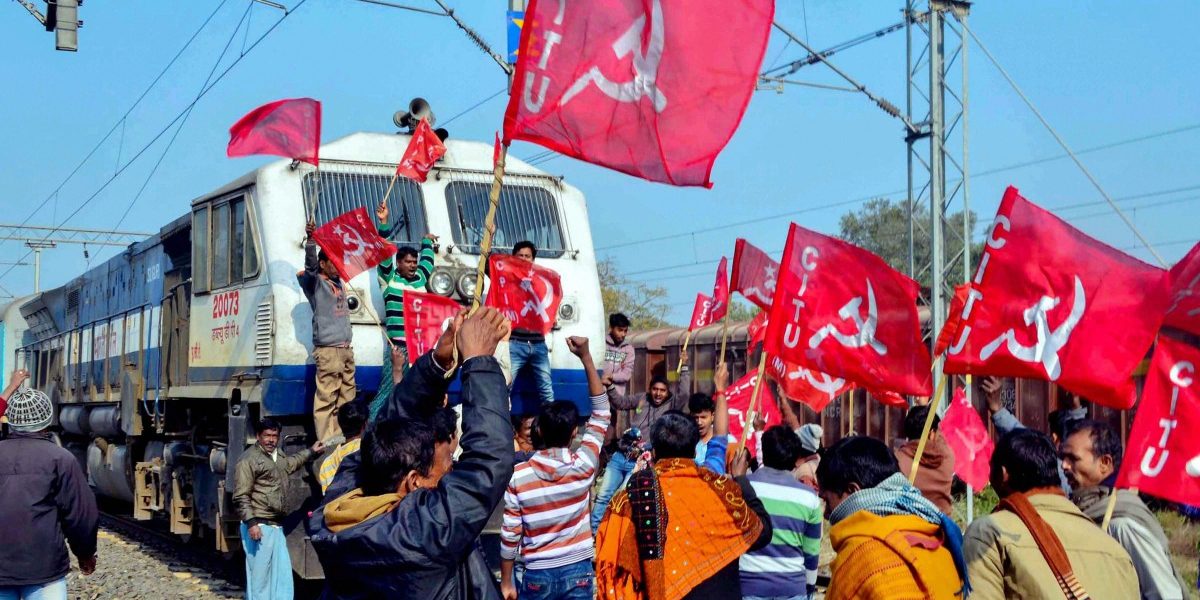 States like Haryana, Chhattisgarh, Jharkhand, Punjab, Karnataka, Goa, Rajasthan, Meghalaya and Assam – particularly in the targeted industrial areas and different mines – witnessed the most visible strikes, according to PTI.

This is the largest number of workers from the formal and informal sector going on strike against the “anti-people” and “anti-worker” policies of the BJP-led Central government, according to Amarjeet Kaur, All India Trade Union Congress (AITUC) general secretary.

Who is on strike?

The strike is primarily supported by the ten central trade unions, farmers, student and teacher unions. The Bharatiya Mazdoor Sangh – an affiliate of the RSS – is not supporting the strike.

According to Kaur, sectors like coal, steel, electricity, transport, education, banking and insurance are expected to support the strike.

The ten central unions participating in the strike are:

In Kerala, public transport has been significantly impacted. Buses belonging to the Kerala Road Transport Corporation, the government transportation body, are not plying, while trains across the state are delayed. Auto-rickshaws are also reportedly keeping off roads, leaving hundreds of commuters stranded, according to Business Standard.

Since the strike began on Monday night, only the Nilackal-Pampa corridor for Sabarimala pilgrims serviced by the Karnataka State Road Transport Corporation is operational.

Most banks, Central and state government offices and port trusts were shut in Mumbai.

Additionally, 30,000 employees of Mumbai’s Brihanmumbai Electric Supply and Transport (BEST) went on an indefinite strike. BEST buses have been off the road since early Tuesday morning. Employees are demanding payments of gratuity, disbursal of bonuses to staff and higher wages. The strike has severely disrupted the city’s public bus service and adversely impacted almost 25 lakh commuters, including office-goers and students.

According to BEST sources, only eight of the 2,200 drivers showed up for the morning shift on Tuesday, while not a single bus left any of the 27 depots.

Private vehicles, however, were plying as usual, while many office districts like Bandra Kurla Complex, Worli, Andheri, Goregaon and other parts were severely impacted.

In several cities across the state, protestors installed road blockades, preventing commuters from going to work. Commuters were also having a hard time finding buses and auto-rickshaws.

Blockades were also staged at several railway stations, affecting the movement of trains in the state.

In lieu of the strike, the state government declared the closure of all educational institutions on Tuesday, according to PTI.

The primary demands of workers in the state include: minimum wages, setting up of social security schemes, deferring the privatisation of government entities, controlling inflation and jobs for the unemployed youth inter alia others. Instances of clashes and vandalism in West Bengal

There have been reports of clashes between the All India Trinamool Congress (TNC) and CPI-M workers in Asansol.

While the CPI-M has come out in support of the strike, leaders from the TNC government have opposed the bandh. The police has also reportedly arrested some CPI-M workers who were demanding minimum wages and social security schemes.

The duration of the strike in Visakhapatnam Steel Plant was limited to 24 hours due to the challenges it has been facing in the recent past. A large number of contract workers and nearly have the permanent staff did not show up for work.

However, production levels at various industrial units across Visakhapatnam have reportedly remained normal since the beginning of the strike.

After four central trade unions decided to support the nationwide strike, Coal India is expected to lose around 3.7 million tonnes of production. Reverberations of this could be felt in the energy sector as at least ten power plants in the country were facing acute coal shortages at the beginning of the year.

Schools and government offices were largely operational in Tripura even as some shops in the state remained closed on Tuesday.

Trains and long-distance buses were plying normally during the daytime. The Tripura unit of the BJP urged people to boycott the strike. However, Tripura CITU president Manik Dey claimed that the strike has been successful and received a good response.

JNUSU and DUTA stand in solidarity with workers

In addition to the nationwide labour strikes, student organisations and political parties have also called for an 11-hour ‘Northeast band’ to protest the Citizenship Amendment Bill which seeks to extend citizenship to non-Muslims from Bangladesh, Pakistan and Afghanistan.

According to Kaur, “The government has failed to create jobs and grossly ignored unions’ 12-point charter of demands. The group of ministers headed by finance minister Arun Jaitley on labour issues has not called unions for any discussion since September 2, 2015 strike.”

The Central Trade Unions issued a joint statement on Monday in which they alleged that the government “undermined tripartism and continued its relentless attack with arrogance on the lives and livelihoods of the working people.”

The unions have also expressed their opposition to the proposed amendments to the Trade Union Act, 1926, arguing that they are irrational and extremely damaging to the independent functioning of unions.