The brass smiths of Birbhum, competing against cheaper alternatives, persist with the hope that government support and product diversification will sustain them. 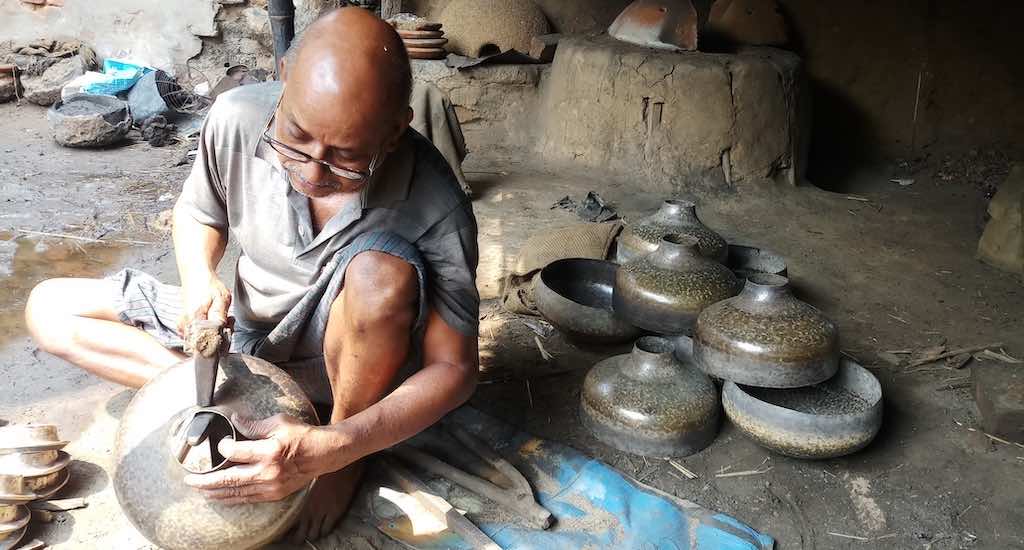 A brass smith beats into shape a traditional brass pot that is no longer in demand Credit: Gurvinder Singh

Budhodeb Hazra of Tikarbeta village works in a furnace every day to feed his wife and two children. The 55-year-old brass smith suffers from a host of respiratory ailments and fatigue due to constant exposure to extreme heat and humidity, but his poverty doesn’t allow him to take rest even for a day. Hazra cannot recollect a day when he didn’t turn up for work in the past five years.

Hazra’s unit is a small tiled roof shed with mud-plastered walls, where he melts metal in a muchi, a circular earthen pot kept inside a mud-walled furnace. The brass smith is among the last of the brass pot makers at Tikarbeta in Ilambazar administrative block of Birbhum district in West Bengal.

With hardly any demand for the traditional brass pots, the few brass smiths who continue to make them find it hard to sustain themselves, looking to government support for a better future for themselves and the ancient art form.

Situated on the bank of Ajay River, close to Tikarbeta is Jayadev Kenduli, believed to be the birthplace of poet Jayadeva, revered for composing Gita Govinda in Sanskrit. Thousands of pilgrims throng the village in January, for the annual fair held to celebrate the poet’s birthday, though many scholars believe that he was born in another village in Odisha that bears the same name.

When one walks towards Tikarbeta, a few meters from Jayadev Kenduli, the chimes of temple bells give way to the sound of hammers beating hard metal. Ashish Ghosh, assistant professor at Visva Bharati University in Santiniketan claimed the existence of brass smiths in the village to be over 800 years. “It is strongly believed that they were present during the Sena Dynasty that ruled the Indian sub-continent from Bengal in the 11th and 12th centuries. Depictions in the temples of Jayadev Kenduli show brass pots being carried in a boat across the river,” Ashish Ghosh told VillageSquare.in. “It is possible that the brass pots were being transported for trade or used during marriages as it is still done today.”

“We have been making brass vessels for carrying water for several generations but it is not possible to continue with the work anymore,” said Hazra. “It requires hours of intensive hard work every day to earn a paltry sum of Rs 5,000 per month and sometimes we find it difficult to earn even that amount.”

Hazra claimed to spend almost 14 hours every day in the job that involves melting the metal, pouring the casting into plates, joining metals to form the pots before making their surface even and eventually polishing them.

Also read: On May Day, a Look Back at the Indian Worker’s Friends and Foes

He said that the return is not worth the hard labor. “I have not allowed my two young sons to venture into the profession, since there is no sufficient income from it,” Hazra told VillageSquare.in.

Around 100 artisans are involved in making brass pots in 50 units in Tikar Artisans said that the number of pots they make has been coming down over the years. They said that the demand for brass pots has dwindled with increased use of plastic pots, in addition to piped water supply to almost every house.

Brass pots are mainly used nowadays during marriages in Bengal and other eastern states. “Earlier, people used to walk for several kilometres to fetch water and so they needed durable pots,” Paresh Dey told VillageSquare.in. “But now people prefer plastic ones that are much cheaper though they lack longevity.” 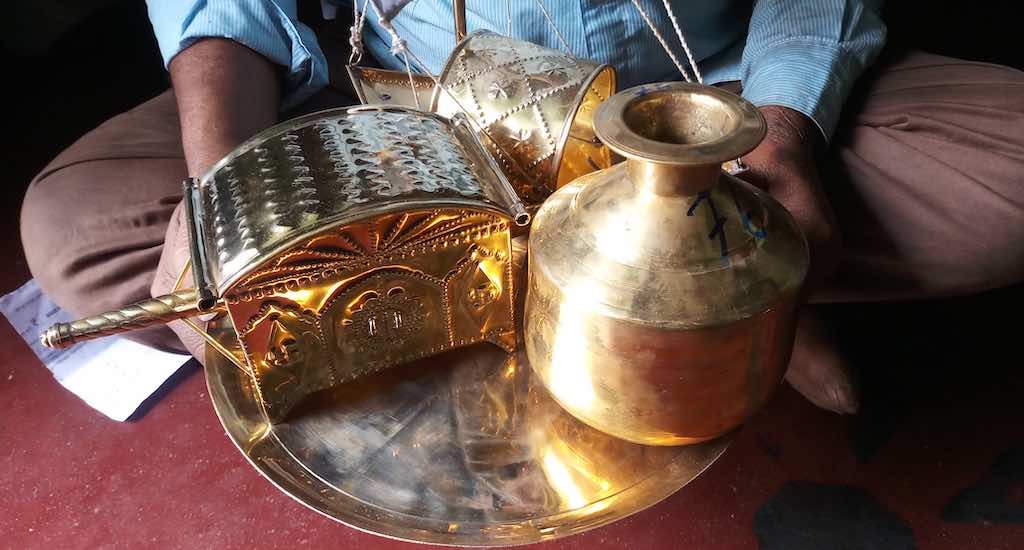 Making diverse brass products is key to sustaining the art of the brass smiths and their livelihoods. Credit: Gurvinder Singh

A brass pot that can hold around 20 litres of water costs Rs 2,000 while a plastic one costs Rs 50, an aluminium or stainless steel pot between Rs 300 and Rs 500. “The rising cost of coal and other raw materials has also contributed to poor returns,” said Paresh Dey.

None of the brass smiths in the village has allowed his children to enter the profession. “We are educating them for a better future. Even the illiterate ones prefer other odd jobs or labor work for survival,” Gosai Dey (52), secretary of the brass workers’ union, told VillageSquare.in.

“The brass smiths of Tikarbeta will find place only in the history books and museums,” said Gosai Dey. “The government has done nothing for us.”

Haradhan Mehatari (44), however, refused to pin the blame completely on the government and opined that the fellow brass workers have not been able to adapt to changing times. Mehatari has been making different showpieces like small palanquins, miniature brass boats, designed plates and similar items.

“We have to accept that the days of brass pots are over. We have to look for other options rather than doing the same thing,” Mehatari, who claimed to make handsome earnings after diversification of products, told VillageSquare.in.

“They have continued making pots with the traditional method without any change, but time has come to diversify and make other items that can create new markets,” said Ghosh, who is a sculptor. “Only diversification of products can prevent the traditional art of Bengal from being lost.”

The state government is aware of the brass workers’ predicament and is taking steps for their rehabilitation. “The administration has acquired around one acre of land to build a common facility center in the village,” Monikanchan Ganguly, Industrial Development Officer at Birbhum, told VillageSquare.in.

According to Ganguly the budget is around Rs 75 lakh and Rs 25 lakh has been already sanctioned for the single-storey building that will house modern furnaces to avoid the smiths working in high temperatures.

“The diversification has also been planned. We will provide technical and infrastructure support to the brass workers. A Detailed Project Report (DPR) has already been submitted and the work is likely to start soon,” said Ganguly.

This article was first published on Village Square. Read the original here.