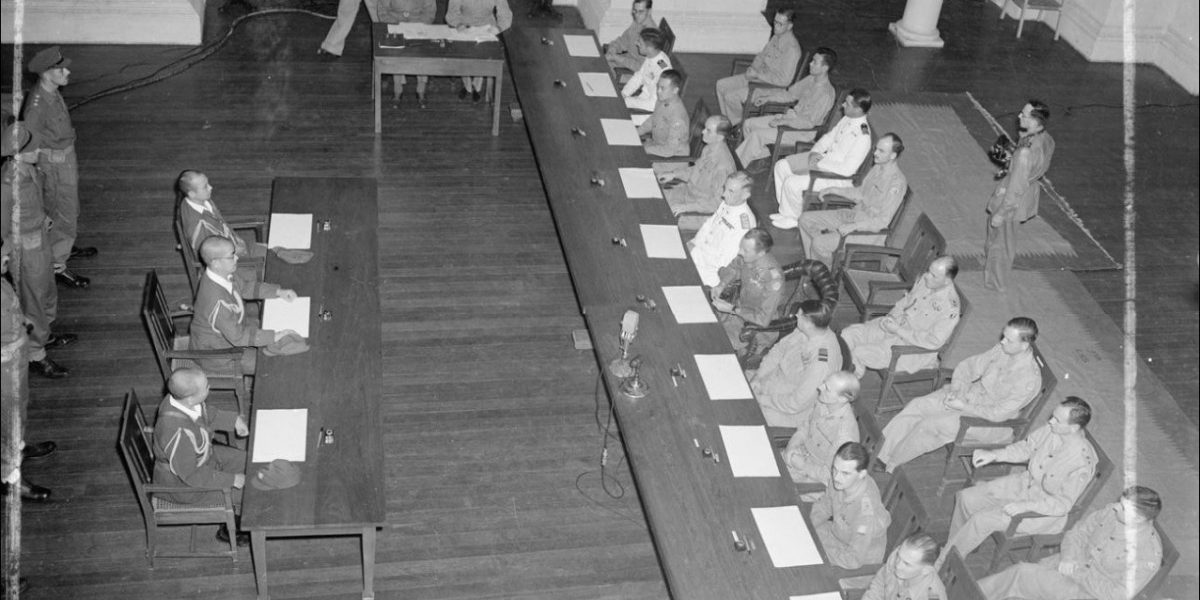 World War II (WW2), the world’s most destructive war, limped to its end in 1945. Germany had surrendered in May of that year, but that did not end the War. Only when Japan surrendered, recognised by Victory over Japan Day—VJ Day, August 15, 1945—was the war really over.

Among the Indian servicemen who had a ringside view to Japan’s surrender was 23-year-old Flying Officer C.G.I. Philip, of what was then the Royal Indian Air Force (RIAF). His memories of that day, and a few days following, are those of a very junior officer. But they say something about India’s diverse experience of WW2. 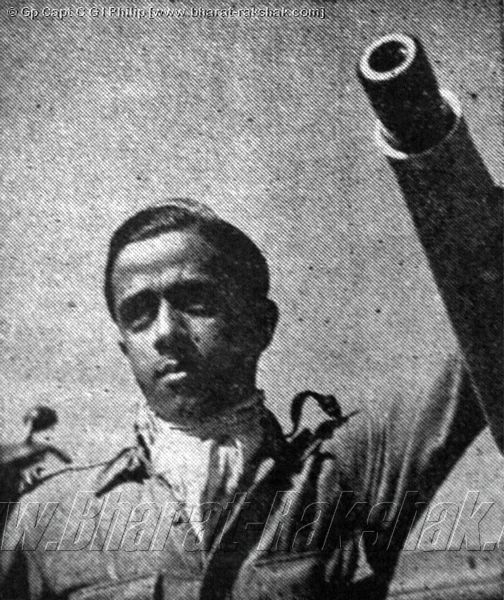 Philip’s unit, 8 Squadron RIAF, the first Indian squadron to fly the iconic Spitfire aircraft, had been among the first Allied units to move back into Burma, as the Japanese fell back. Since July 1945, they had been flying out of Mingaladon, the airfield for Rangoon, the capital of Burma.

Early in August, two atom bombs were dropped on Japan. Their terrifying power (and spectacle) destroyed what years of military defeats had not: Japan’s will to resist. On August 14, Japan agreed to surrender, and combat operations were suspended.

The use of atomic weapons was controversial. Allied leaders saw them as having saved lives in the net reckoning, ending the war without the bloodbath of invading Malaya and Japan itself. Young Allied servicepeople were understandably relieved, and hence mostly untroubled by the moral questions. For months, many of them had been engaged in liberating occupied territories and prisoner of war (PoW) camps, where evidence of Japanese brutality was unambiguous. And Japanese atrocities in China had been known before the start of the war. These, plus gulfs of language, culture and ethnicity, probably contributed to stark “othering” of the enemy in this theatre, and some indifference to the long-term effects of the weapon.

But even then, some soldiers, Indians among them, had qualms. The 1990s novel and film The English Patient depict the Indian soldier character Kip as more traumatised by news of the atom bomb than by his gruelling wartime service defusing unexploded bombs. Some real-life Indian veterans recall similar misgivings, even from the spearhead of the fighting.

Returning to Philip’s squadron, Rangoon was, to their excitement, where a preliminary surrender agreement was to be signed. The designated Allied signatory was Lieutenant-General Frederick ‘Boy’ Browning, something of a wartime celebrity. The previous year, he had commanded the paratrooper-led assault on Arnhem in Holland, the wartime episode covered in the film A Bridge Too Far. He was also the husband of the well-known novelist Daphne du Maurier.

The Japanese delegation flew into Rangoon, in two transport aircraft painted white for the occasion, escorted by relays of Allied fighters. For the last leg into Mingaladon, the escort included Spitfires of Philip’s squadron. He recalls:

‘I was [flying escort] on the first [day the flight was attempted]. And we had to call it off. Because of weather… And the second day, everybody was lined up… We had our chaps lining-up the entire runway. Just a security precaution; we didn’t want some chap to go [berserk] and take vengeance… And they got into the cars, and… [drove off] to Jubilee Hall.’

The squadron diary adds that squadron personnel were armed with Sten guns. This seems a trivial detail, but Sten guns were long-lasting cultural icons of the war. Their characteristic sounds were reproduced with gusto by schoolboy re-enactors for years afterwards. 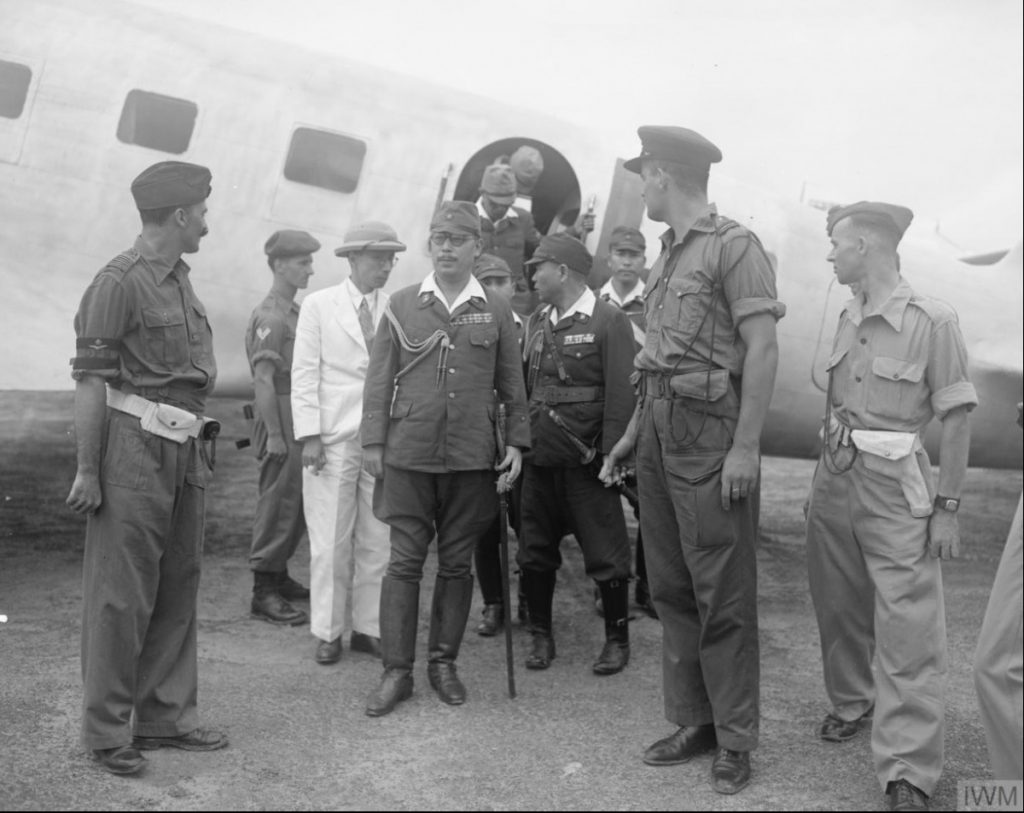 At Jubilee Hall, a handsome Rangoon landmark building commemorating Queen Victoria’s diamond jubilee, there was a series of speeches by both sides, haltingly interpreted. Then senior officers of the two sides sat down at separate rows of desks, facing each other across the polished wooden floor, and signed the preliminary surrender agreement. Allied clerks had sat up till the wee hours of that morning typing it out.

Young as they were, most Indian personnel in Rangoon were conscious of the historic significance of the moment. They found ways to crowd into the balconies and galleries of Jubilee Hall, to watch the moment that ended the war in their theatre.

Once the Japanese had surrendered, Philip had another concern. He had grown up in the nearby town of Moulmein, and his mother, brothers and sisters had stayed on when the British fled in 1942. Philip’s commander granted him permission to fly there in the squadron’s “hack” aircraft, a two-seat Harvard.  One squadron-mate accompanied him in the Harvard; a few others seized the excuse to fly along in Spitfires, nominally as escort; and a couple more hitched a lift in a transport aircraft taking 20-odd Gurkha troops there.

Landing at Moulmein was not without risk. Allied troops had not yet reached there in force, and Japanese garrisons in some other locations had not honoured surrender orders. But in the event, this small expedition of Indian pilots and Gurkha troops was greeted with military correctness:

‘We landed there, there was a Japanese colonel, in his car. And all these Japanese soldiers – when they went past, they would salute. Very disciplined … And this colonel was about six feet tall. Tall, for a Japanese. Smart chap.’

In the spur of the moment, Philip and his companions, who included Flight Lieutenant Ranjan Dutt (grandfather of Bollywood actor Tiger Shroff), decided to drive to Philip’s old house, looking for his mother. They accosted the Japanese colonel and announced they were requisitioning his car. Philip recalls, “I said, Lord Mountbatten will take care of it.” The colonel yielded his car, and Ranjan Dutt, with the adrenalin of victory coursing through his veins, took the colonel’s ceremonial sword from him.

And that set a tone for the day. The car-load of young Indian officers collected several Japanese swords, during their day in Moulmein, whenever they spotted a Japanese officer wearing one:

“The chaps must have recognised the colonel’s car. And we’d take [their] swords. Mind you, there were four, five of us there – we had our service pistols with us. But they had their whole battalion there. And if they were not disciplined people, they could have wiped us out of there, and nobody would have known … Very disciplined. 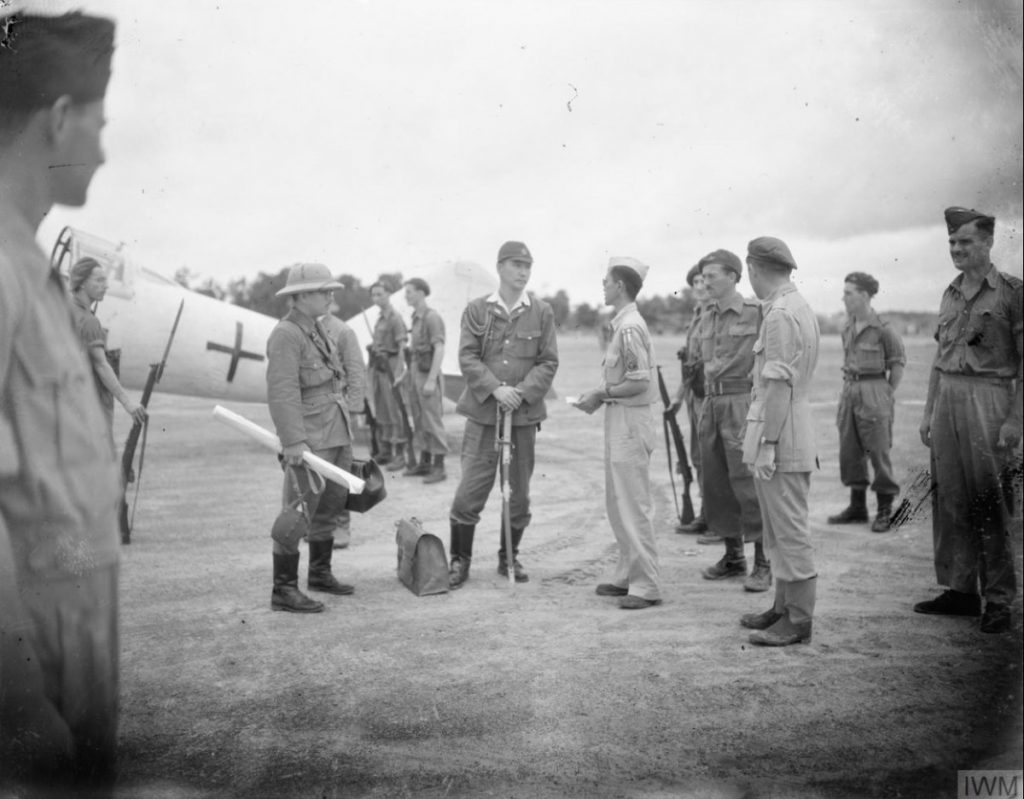 Philip did manage to locate his mother, and the rest of his family, that day. They had remained in Moulmein throughout the war, though not actually in their own house; they had moved to a safer location on a friend’s farm. Contrary to the experience of many others in Japanese-occupied territories, the family had not been harassed in any way, although Philip’s brothers had been involved in resistance activities. The Japanese had even paid the family for the use of their house, albeit in Japanese-issued rupees, a now-useless occupation currency.

Years later, Philip admitted deeply regretting his role in seizing the swords on that heady day in Moulmein. Of course, his little troop of Indian officers were not the only Allied personnel taking possession of Japanese swords during this period. All over Burma, South East Asia, and the Pacific theatre, young Allied military personnel were meeting Japanese personnel for the first time, and warily sequestering weapons and military equipment. In many of these encounters, documented in almost every Allied memoir of the time, somebody appropriated their erstwhile adversaries’ swords. This behaviour is understandable, and far from the worst that victors have sometimes indulged, on victory after years of war. But Philip’s innate decency kept troubling him for years:

“As I grew older, reading about the samurai, and their traditions, I felt very guilty … I should try and trace this family, and give this sword back to them.  I felt I’d done a very wrong thing. And I wanted to make up for it.

“But the years kept going on … if [that Colonel]’s alive somewhere, I want to give it [back].”

Philip stayed on in the Indian Air Force after Independence, eventually retiring as a highly-respected Group Captain. He did organise the return of one sword. But he never found the tall Japanese colonel who had impressed him by his dignity in surrender. He preserved the sword as carefully as he could.  The leather of its scabbard turned brittle over the years, and the sword lost its original shine, but till his own death in 2012, Philip nurtured hopes of returning it to its original owner one day. 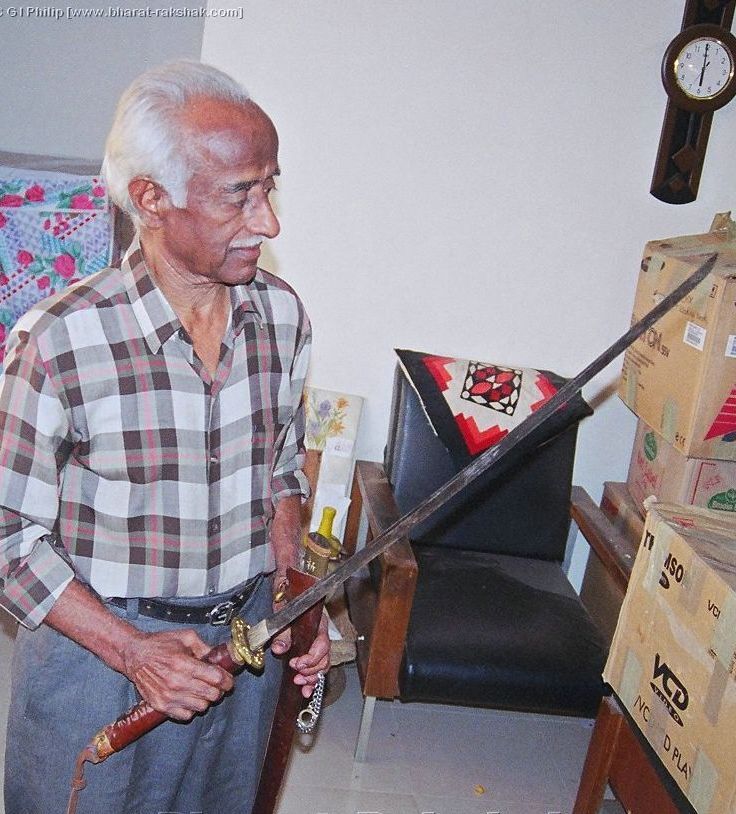 Philip’s account, and a few others, suggest that some Indians emerged from the war with fewer traumas about Japan than other Allied servicepeople. That was true even of this possibly most brutal theatre of the war, even with evidence of such brutality pouring out of liberated areas. Indians taken PoW in 1942 experienced that brutality first-hand, and many did not survive it. Indians who helped liberate PoW camps in 1945 saw grisly evidence. But Indian veterans never mounted protests against the Japanese emperor, as some Allied veterans continued to do till the late 1990s.

At a wholly different level, the sole Indian judge at the Tokyo Trials was the only one to dissent on Japanese guilt, and draw attention to the victors’ justice of the time.

The advent of Independence, and freedom from British rule, contributed to the difference in perspective. But there was surely more to it than just perspective. The Indian experience of World War II remains diverse, unique, and shamefully little-known.

K.S. Nair is a lifelong student of Indian military and aviation history, and the author of over 60 articles and two books. His most recent book, The Forgotten Few, tells the story of the Indian Air Force during World War II.