When the US Supreme Court Ruled That Indians Aren't Legally White

Bhagat Singh Thind wasn’t challenging the racial discrimination of his era’s immigration laws; rather, he was trying to expand the commonly understood definition of white to include people like himself – a high-caste person born in Punjab. 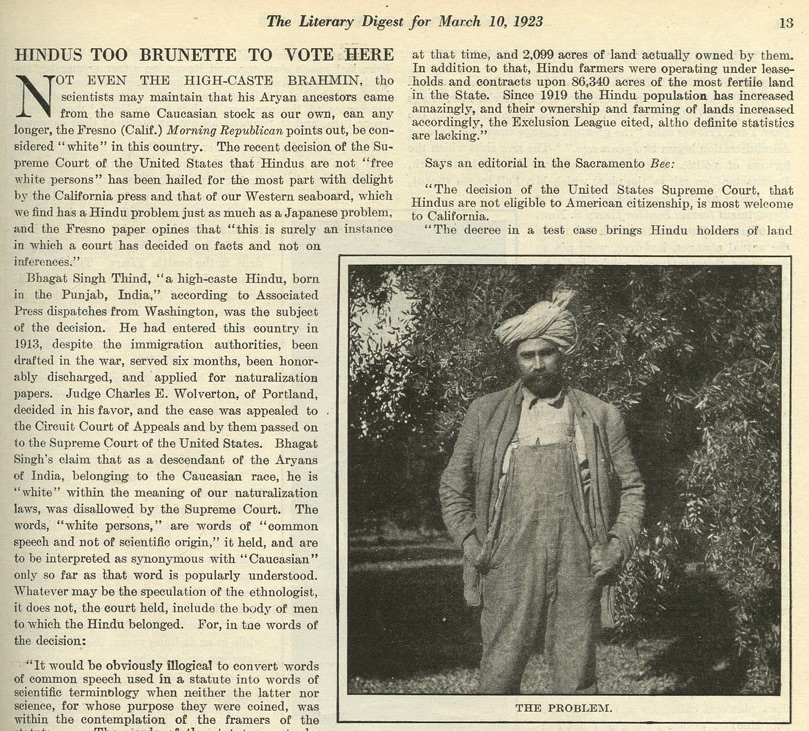 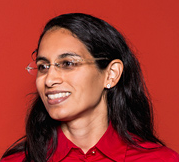 Indians are officially not white – that was the US Supreme Court’s ruling 95 years ago, on February 19, 1923, in the case United States vs Bhagat Singh Thind. Yes, the court actually made a legal determination that Indians are not white.

Bhagat Singh Thind was born in Punjab and immigrated to the US in 1913. A judge later granted him naturalisation, but that decision was appealed and Thind’s case eventually made its way to the Supreme Court, as described in the 1923 Literary Digest article ‘Hindus Too Brunette to Vote Here’, available through the South Asian American Digital Archive.

The laws of the time limited naturalisation to just “free white persons” and “aliens of African nativity and…persons of African descent,” so Thind’s legal strategy was to prove that he was white. 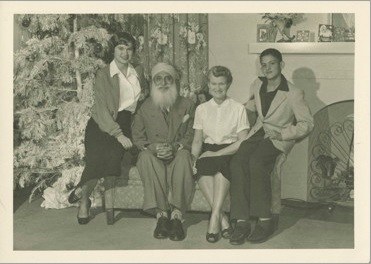 A Supreme Court ruling just the year before, Ozawa vs United States, had ruled that the term “white” was “confined to persons of the Caucasian Race”. Some “scientific” racial classification systems of the era labeled many South Asians as Caucasian because they were descendants of Aryans. So Thind argued that he descended from Aryans and was therefore Caucasian.

The court described Thind’s position as follows: “The eligibility of this applicant for citizenship is based on the sole fact that he is of high-caste Hindu stock, born in Punjab, one of the extreme northwestern districts of India, and classified by certain scientific authorities as of the Caucasian or Aryan race.” (Thind was actually Sikh, but “Hindu” was often used as a racial term at the time.)

The Supreme Court, however, decided not to use the “scientific” definition of Caucasian and instead use the “common man’s” understanding of the term. The ruling stated, “it would be obviously illogical to convert words of common speech used in a statute into words of scientific terminology.…The words of the statute are to be interpreted in accordance with the understanding of the common man from whose vocabulary they were taken.”

Unfortunately for Thind, the common man’s understanding of Caucasian did not include people from India. Therefore, due to the racially discriminatory policy of not allowing people of South Asian ancestry to become citizens, Thind and many other South Asians who had already become US citizens were denaturalised, including the father of Ram Bagai, the latter a South Asian supporter of Martin Luther King Jr. during the civil rights movement.

From the vantage point of 2018, it’s important to note that Thind wasn’t challenging the racial discrimination of his era’s immigration laws; rather, he was trying to expand the commonly understood definition of white to include people like himself – a high-caste person born in Punjab. 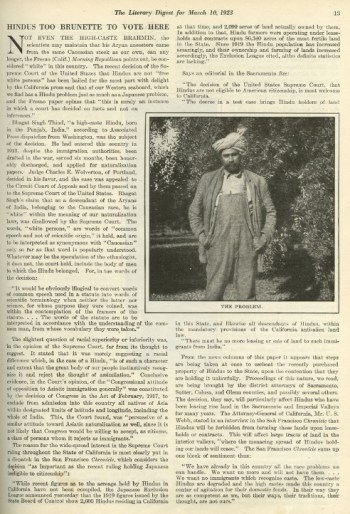 Thenmozhi Soundararajan, writing for Rewire, has pointed out the casteist nature of Thind’s argument. As troubling as the casteism is from today’s perspective, it’s also understandable why – given the circumstances of 1923 – Thind went with an “I’m white too” strategy rather than challenge the racially discriminatory laws as unconstitutional and flat-out wrong.

Thind, who had served in the Army during the First World War, did eventually become a US citizen in 1936, when Congress approved veterans of that war to be naturalised. He married his wife, Vivian, in 1940; had two children with her, Rosalind and David; and lectured across the US on topics such as nonviolence, metaphysics and spirituality. He passed away in 1967.

Fifty years after Thind’s death, immigration and who is suitable for US citizenship are still hotly debated topics. And denaturalisation still happens: Baljinder Singh, an immigrant from India, lost his US citizenship this year. Officials said he used a false name when he entered the US in 1991 and shortly thereafter received a deportation order, but he failed to disclose all this when he applied for citizenship under his actual name in 2004. He was the first person denaturalised under Operation Janus, an investigation into people who might have obtained US citizenship fraudulently.

And, of course, there’s President Donald Trump’s travel ban, which prohibits entry by most people from six Muslim-majority countries. A federal appeals court on February 15 ruled against it, with one judge writing, “the proclamation is unconstitutionally tainted with animus toward Islam.”

Preeti Aroon (@pjaroonfp) is a Washington, D.C.-based copy editor at National Geographic and was formerly copy chief at Foreign Policy.