The Forgotten Massacre of Dalit Refugees in West Bengal's Marichjhapi

A conservative estimate gave the dead in the 1979 violence as several hundreds of men, women and children who died either through starvation or were shot at and their bodies thrown into the Raimangal river. 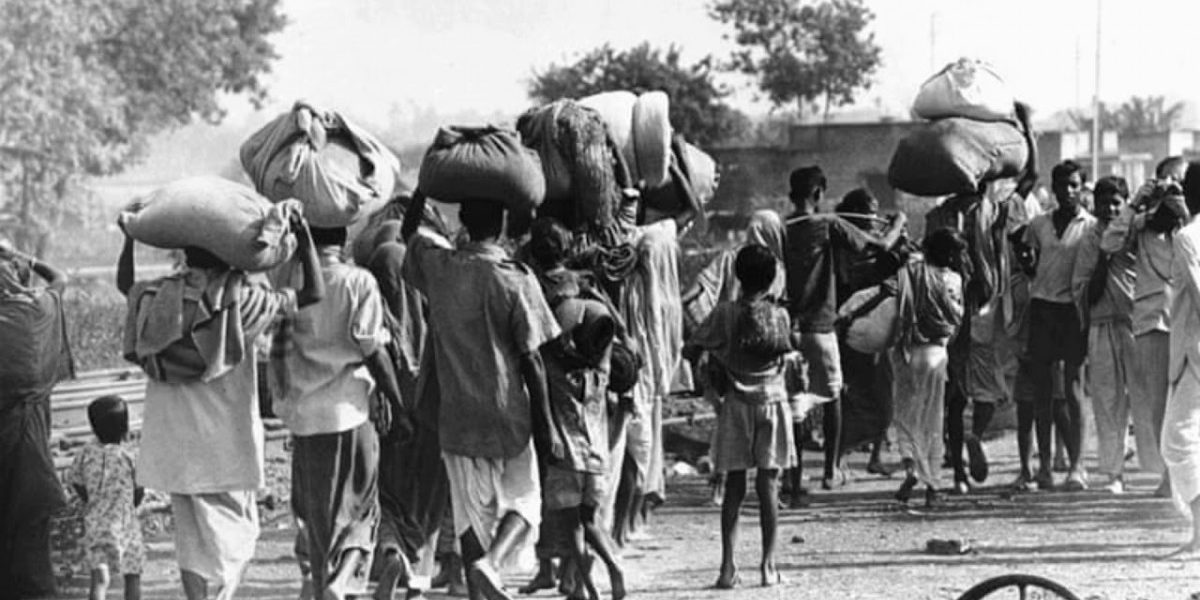 The saga of the migration of Namasudra lower caste refugees from Dandakaranya to Marichjhapi and their subsequent massacre is one of denial, deprivation and state-sponsored annihilation of Dalits that has few parallels in post independence Indian history. Representative image credit: Youtube

History has never written their story of facing impossible odds to fight, with their lifeblood, to the very bitter end, for survival.
∼ Shaktipada Rajguru, Dandak Theke Marichjhapi

If we glance at the history of West Bengal, the state’s political life is seeped with various manifestations of violence, both by and against the state, particularly as an aftermath of Partition and even many years beyond 1947. Bengal’s geo-politics has remained a continual site of traumatic upheavals through significant movements involving large-scale violence: from the Tehbhaga sharecropper’s movement in 1940s to the Naxalite movement of the 1970s, all of which have left their mark on the political life of its citizens. Therefore, the possibility of violence as a political tool has remained a significant element of the state’s history, although some chronicles of it have remained marginalised or forgotten.

The saga, for example, of the migration of Namasudra lower caste refugees from Dandakaranya to Marichjhapi and their subsequent massacre is one of denial, deprivation and state-sponsored annihilation of Dalits that has few parallels in post independence Indian history. Together, the names of Dandakaranya and Marichjhapi constituted a watershed moment in West Bengal’s political life that demonstrated the state’s track record of complicity in the brutal killing of its citizens. It also underlined the tenuous but significant links between state-sponsored violence, civil uprising and issues of normative justice that have often remain unaddressed even at present moments of the state’s history. Marichjhapi signalled an apogee in the culture of violence that would transform the practice of the everyday in the state. That poison tree continues to bear strange fruits.

The arrival of the Dalit refugees some years after 1947 became a crisis of rehabilitation that West Bengal had not faced before. Immediately after 1947, the Scheduled Caste populace of East Pakistan had not uprooted themselves in any massive numbers. Mainly agriculturists, small traders and artisans, their ties to lands were strong and they had initially resisted the idea of moving because their leader Jogendranath Mandal, a minister in the East Pakistan cabinet, had assured them security. However, through the 1950s, increasing food prices and low-grade communal riots in Khulna and Jessore brought back fears of intimidation. In October 1952, with the introduction of the passport system between India and Pakistan, these uncertainties became real. Through the following years, the Scheduled Caste Namasudra and Poundro Kshatriyas started moving into West Bengal, first in small groups and then in an exodus. The state, one-third its original size, had few means to rehabilitate this large number. Increasingly in government circles, the idea was mooted that the newcomers should be accommodated outside West Bengal.

The government of India conceived of the Dandakaranya rehabilitation plan in early 1956. Subsequently, the Dandakaranya Development Authority was set up to oversee the entire process. Spread across the states of Madhya Pradesh, Orissa, Maharashtra and Andhra Pradesh, Dandakaranya was a vast area of primeval forests, uneven rainfall and stony land inhabited by Adivasis like the Bonda, Gond and Bhil people, to name a few. Resettling refugees there, originating from riverine East Pakistan, with its abundant rainfall and alluvial rich land, was a recipe for disaster. S.K. Gupta, chairman of the Delhi Development Authority in 1964-65, noted that in Pharasgaon region, “6% of the plots were basically unfit for agriculture, 32% were poor and sub-marginal, 53% could be of medium quality if their moisture retention capacity could be improved, and only 9% were of good quality”. Amitav Ghosh’s novel ‘The Hungry Tide’ (2004) has given Marichjhapi a representational space in the English-speaking world, but the other, older Bangla narratives are pushed to the background.

Other infrastructure, enthusiastically promoted by the Indian government, also failed to materialise. Electricity was not available over large areas and there was often an acute shortage of drinking water. The lack of medical services and poor living conditions led to frequent epidemics with a high child mortality rate that unsettled the refugees. Dandakaranya, the mythological place of the ‘dark forests’ where Lord Rama was once exiled, appeared to the new settlers less a land of hope than a place of banishment. It was not surprising that by 1964, incidents of desertion began to appear in local dailies and in the national press. From Dandakaranya, the Marichjhapi massacre was not too far away.

In West Bengal’s postcolonial history, the name Marichjhapi is almost a forgotten chapter. Few people talk of it, fewer historians have written about it. The reason for this was perhaps the presence of a large percentage of marginal communities and lower castes among the refugees who were sent to Dandakaranya and some of whom came to settle in Marichjhapi in the Sundarbans. Neither the elitist Congress ministers at the Centre nor the urban middle class of Calcutta had much sympathy for the Scheduled Caste and OBC refugees. The tragedy was that when a Communist government came to power in West Bengal, the underlying violent character of the ‘liberal’ nation-state did not change.

In 1977, with the Left Front government in power, the refugees who had been rehabilitated in Dandakaranya became hopeful that the new popular government who had always espoused the refugee’s cause would now help them come back to West Bengal. The Left Front minister Ram Chatterjee visited the refugee camps at Dandakaranya and was widely reported to have encouraged the refugees to settle in the Sunderbans, a long held Left demand. So, through the months of March and April 1978, families sold their belongings and left Dandakaranya. But Left Front policies had changed under new conditions of governmentality. It was also acknowledged that the refugees in Dandakaranya, (under the organisation of Udvastu Unnyanshil Samiti) had refused to be a part of United Central Refugee Council, a Communist Party of India (Marxist) refugee organisation, since they felt that the refugee problem was a national problem and their identity must not be part of any political group. The CPI(M) in turn was miffed at the thought that their dreams of getting electoral advantages in states like Orissa and Madhya Pradesh with a large refugee electorate had become unviable.

The Left Front in West Bengal that had come to power with the refugee vote now urged the deserters to go back to Dandakaranya, refusing to entertain their demand of settling in West Bengal. Many were forcibly sent back but around 10,000 Namasudra refugee families under the leadership of Satish Mandal, president of the Udbastu Unnayanshil Samiti, set sail to relocate in Marichjhapi. (There seems to be some dispute about the exact number of people who managed to settle in Marichjhapi but it can be any where between 4,000 to 10,000 families.) Although it was not an island that was strictly under the mangroves, the government was in no mood to relent. It declared Marichjhapi as a reserve forest and the refugees as violating the forest Acts by destroying “the existing and potential forest wealth and also creating ecological imbalance”.

On January 26, 1979, India’s Republic Day, then Left Front chief minister Jyoti Basu announced an economic blockade of Marichjhapi. Thirty police launches surrounded the island; the refugees were tear-gassed, their huts, fisheries and tube-wells destroyed. Those who tried to cross the river in makeshift boats were shot at. The refugees, armed with carpentry tools and makeshift bows and arrows, were no match for the armed government forces. A conservative estimate gave the dead as several hundreds of men, women and children who died either through starvation or were shot at and their bodies thrown into the Raimangal river. Marichjhapi became out of bounds to visiting journalists, opposition politicians and even a Parliamentary Committee, who came to investigate police atrocities, faced harassment at the hands of the Forest Department officials.

The silence surrounding the massacre was to continue for decades except for stray efforts that tried to expose the lies, deceit and betrayals that had come to signify Marichjhapi. Shaktipada Rajguru’s novel Dandak Theke Marichjhapi (1980-81) is the only full-length novel in Bengali that talks of Marichjhapi with candour. However it is also not surprising that this novel has remained out of print for many years and it has never been part of the mainstream literary canon in West Bengal. The violence around Marichjhapi was more than the annihilation of a people whom the state had disowned. It was the marginalisation of a literary work that had dared to expose the violent history of Marichjhapi and a production of a culture of silencing dissent. It was doubly ironical that when the Trinamool Congress was aspiring to power in Bengal, large hoardings about Marichjhapi had come up in Kolkata in 2009 promising justice to the survivors. However, the lesson from the massacre seems to have been consigned to oblivion and the cycle of political violence continues in the state through different semblances.

Debjani Sengupta teaches at the Department of English, Indraprastha College, Delhi University. She is the author of The Partition of Bengal: Fragile Borders and New Identities (CUP, 2015).