While Gandhi said he would not come in the way of anyone taking the smallpox vaccine, he also said he could not change his beliefs and encourage it. 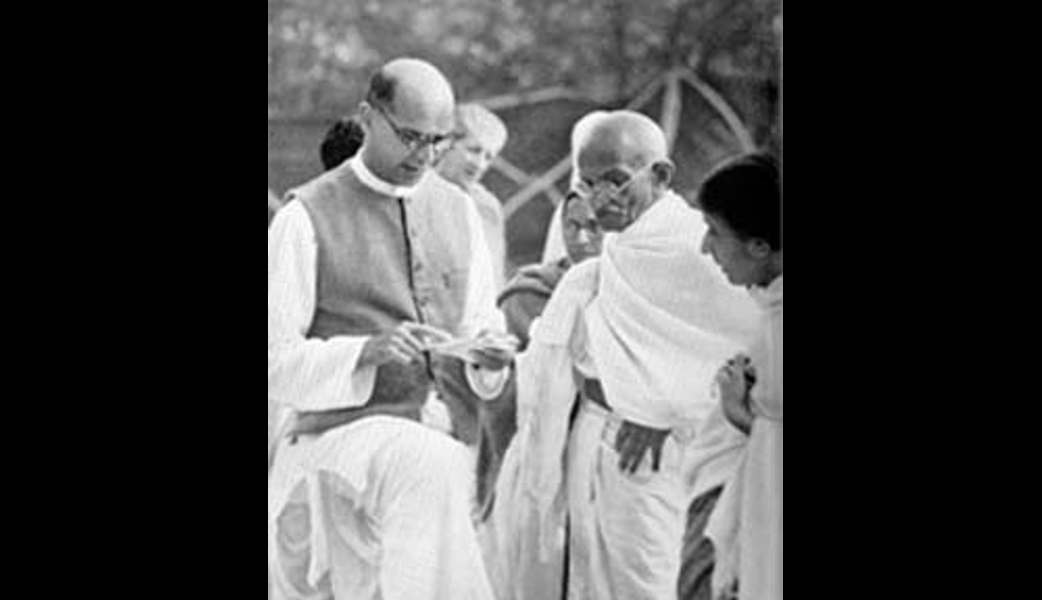 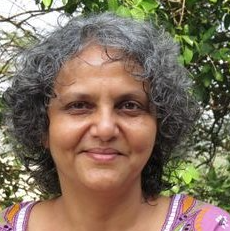 The conversations around COVID-19 vaccinations often heard these days – whether to take the vaccination or not, how effective it is, the suspension of the vaccination programme in some countries due to fear of the side effects – reminds me of an incident at Mahatma Gandhi’s Sabarmati Ashram in Ahmedabad, as recorded by Mahadevbhai Desai in his diary.

Gandhi’s close aide, Mahadevbhai Desai, maintained extensive diaries of events around Gandhi. Some of these have been published, in 23 volumes in Gujarati. Diary number 13, which covers the period August 31, 1929 to January, 1931, includes among other things, Gandhiji’s beliefs about vaccination. I reproduce some translated excerpts from the diary here about smallpox and discussions around vaccination in the Sabarmati Ashram.

“Trial and Readiness”: To the North of the (Sabarmati) Ashram is a jail and to the south is a crematorium. From the terrace of the Ashram with the Ashram flag, one can see the walls of the jail and the funeral pyres burning in the crematorium. Although we see these two places daily, and yet, so that we do not forget how close we are to death…Shitala Mata  ( deity of smallpox) has shown its frightful appearance. 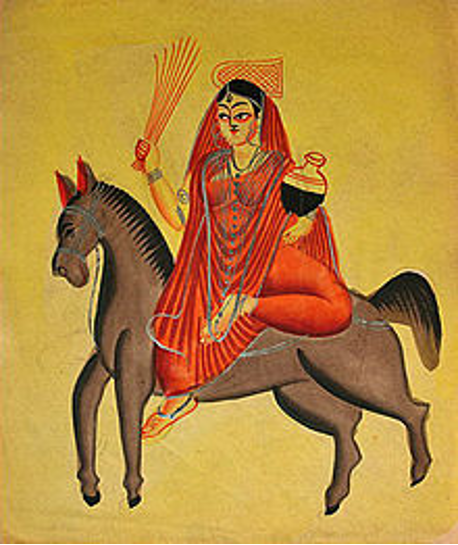 An image of Sitala, the cooling goddess of smallpox. Photo: Wikimedia Commons

“Although people do see a crematorium, those residing at the Ashram see it daily. We are aware that people suffer from troubles and lakhs die across the country. And yet, people are so short-sighted that  so long as they do not encounter a personal experience (of death), they remain carefree. As if to eliminate that carefreeness, Shitala Mata arrived in the Ashram and in spite of having taken plentiful care, (she) took oblation/ sacrifice of three tender children. One among them did not even last to avail of any care at all. This incident put several people to several types of trials.

The residents of the Ashram recite the Gita daily; they hear and recite that death is a certainty for all who are born. To them, death appeared three times within a short span of three days and this was a trial of the Gita recitals by the parents of the three children. All the three parents passed the test fully and if the death God, Yamraj could certify, he would have done so too. There is no need to mention that there was no weeping and wailing. Those who had to reach the children to the crematorium did so and the rest continued with their duties. There was no change in the daily routine of the parents of these children. A father told patiently to his child on death bed, “Child, recite Ramnama”. The child uttered Ramnama two-four times and gestured that he was unable to speak. Another father, at the time of the evening prayers when his child was breathing his last, handed him over to his mother. The mother happily allowed the father to go to the prayer meeting. And the child passed away just when the prayer lines of ‘steadfastness of intellect’, were recited. No sooner was the prayer over that the father was informed, but the father instead of rushing home, with calm mind made everyone follow Ram Dhun (prayer lines sung repeatedly). What other sight could be better than this?  As I write this, I am aware that I do not have the capacity to remain calm in this way. I cannot welcome death like this, and so, I bow my head to the parents of the three children.

Also read: The AstraZeneca Vaccine Crisis in Europe Wasn’t About Science at All

This is about the trial of the Ashram residents who undertake Gita recitals. But the trial of Gandhiji who made them fond of Gita recitals was even greater. Gandhiji’s principle of not to take vaccination has been prevailing for many years now. He has written about it several times. He has cured many children with determination from smallpox. But when three children die one after another who can remain steadfast? It is fine if I say that Gandhiji is more fond of the children in the Ashram than their own parents are of them. But it may come into his mind: ‘Am I being cruel by not recommending vaccination for the Ashram children to keep them safe from smallpox?’ Thousands of people got vaccinated in Mumbai and Ahmedabad. It is not just the critiques but even friends are saying daily: ‘Why is Gandhiji taking such unnecessary risk?’ A well-wisher too made it clear: ‘I am aware that you are not disallowing anyone from being vaccinated. But now, I wish that you insist that everyone is vaccinated.’ This gentleman is much valued by Gandhiji, and had it not been an issue of principle, he would have implemented the advice of the gentlemen. But at such time as this? He (Gandhiji) shared the letter of the well-wisher with many.  He read it out at the prayer meeting but along with it he shared his inner thoughts:

“To take vaccination is a dirty act, there is extreme harm in taking it. I consider taking it equivalent to eating beef. But at a time when my own children are dying one after the other and if I change my principle and announce that there is no harm in taking vaccination, what value remains in my truth? What is the meaning of my faith in God? Even if the whole Ashram is wiped out and so long as there is no evidence of substantive mistake, it is my religion to adhere to it. Who would like to lose their own children? Those parents who feel safe in getting their children vaccinated may go ahead. I will not object at all and will also make arrangements, but how can I change my belief? How is it possible for me to provide encouragement in taking of vaccination?’”

While the above record is from Mahadevbhai’s diary, Gandhi’s views regarding vaccination have been documented in his book A Guide to Health, translated by A. Rama Iyer and published in 1921 in English. Some excerpts from the chapter ‘Contagious Diseases: Small-pox’: 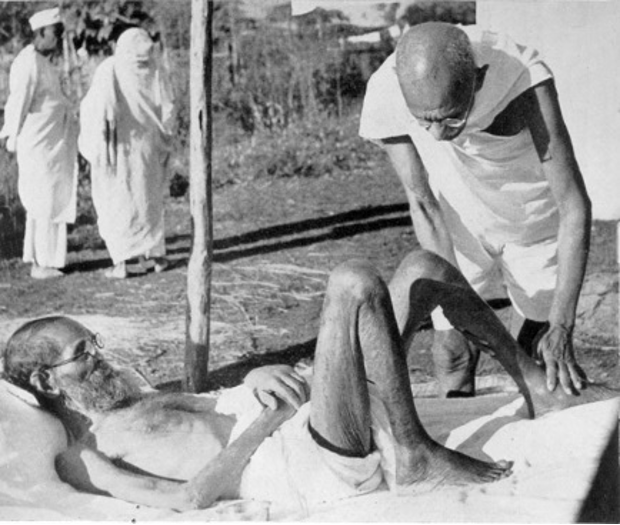 “…We cannot, of course, assert that small-pox is never transmitted by touch, for those that are physically in a condition favourable to its transmission will catch it. This is why, in a locality where small-pox has appeared, many people are found attacked by it at the same time. And hence the attempt to mislead the people into the belief that vaccination is an effective means of preventing it. The process of vaccination consists in injecting into the skin the liquid that is obtained by applying the discharge from the body of a small-pox patient to the udder of a cow…Vaccination is a barbarous practice, and it is one of the most fatal of all the delusions current in our time, not to be found even among the so-called savage races of the world. Its supporters are not content with its adoption by those who have no objection to it, but seek to impose it with the aid of penal laws and rigorous punishments on all people alike.

The practice of vaccination is not very old, dating as it does only from 1798 A.D. But, during this comparatively short period that has elapsed, millions have fallen a prey to the delusion that those who get themselves vaccinated are safe from the attack of small-pox…Moreover, vaccination is a very dirty process, for the serum which is introduced into the human body includes not only that of the cow, but also of the actual small-pox patient. An average man would even vomit at the mere sight of this stuff… And yet we do not shrink from getting ourselves vaccinated! As has been well said, cowards die a living death, and our craze for vaccination is solely due to the fear of death or disfigurement by small-pox. I cannot also help feeling that vaccination is a violation of the dictates of religion and morality. The drinking of the blood of even dead animals is looked upon with horror even by habitual meat-eaters. Yet, what is vaccination but the taking in of the poisoned blood of an innocent living animal? Better far were it for God-fearing men that they should a thousand times become the victims of small-pox and even die a terrible death than that they should be guilty of such an act of sacrilege…”.

As a student of Gandhian thought, I appreciate that Gandhi has expressed himself clearly on wide range of issues, right from gram swaraj to bramchariya to varnashrama dharma to Ram Rajya, agriculture, health, women and so on. However, many of these thoughts have not been discussed or acknowledged sufficiently. Studying these thoughts and discussions around it can only help us understand the social, cultural, political, economic context those thoughts were located in.

As far as smallpox is concerned, India had an epidemic in 1974. Although I was just a child back then, I recall vividly that I was vaccinated in a door-to-door vaccination drive. I do not remember if our parents/guardians could refuse a vaccination back then. Smallpox was eradicated from India in the late 1970s and the World Health Organisation declared the world free from smallpox in 1980.

Nandini Oza is an oral historian and a former activist with the Narmada Bachao Andolan. She can be reached at nandinikoza@gmail.com.