They Had Their Differences, But Also Much Respect for Each Other

Fake letters and politically motivated claims cannot change the fact that Bose and Nehru had great admiration for each other. 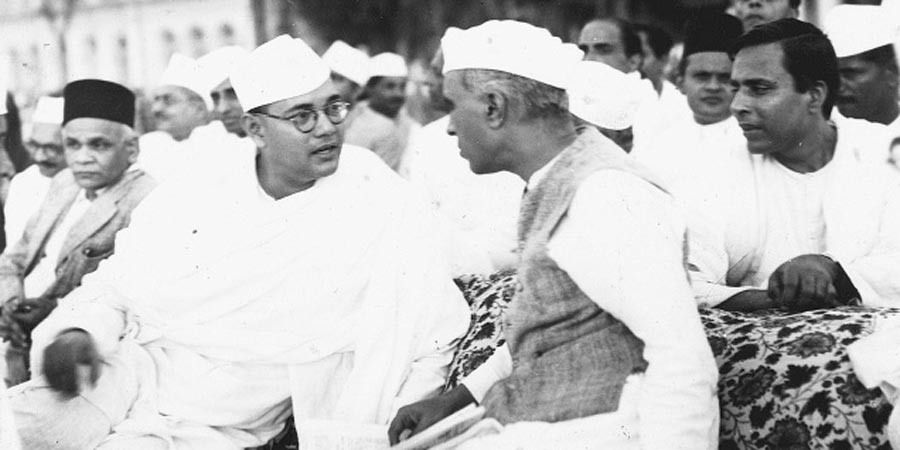 A file photo of Subhas Chandra Bose and Jawaharlal Nehru

A letter supposedly written by Jawaharlal Nehru to Clement Attlee referring to Netaji Subhas Chandra Bose as ‘your war criminal’ has been under circulation in the social media for a year or more. It was once again spread widely by some people on the occasion of declassification of the Netaji files by the Modi government, conveying an impression that it was part of the files, opened to the public for the first time.

That the letter is fake and fabricated is fairly clear on several grounds – it contains gross errors of grammar and spelling, for one thing. Noted historian Ramchandra Guha clarified that it was completely inauthentic, and the recently declassified files related to Bose did not corroborate anything mentioned in it. It is clear that the fabricated letter is one of the many desperate attempts by the Sangh parivar and its supporters to discredit Nehru by resorting to false propaganda. At the same time it has offered a fresh opportunity to re-examine Bose’s thoughts and relations with Gandhi, Nehru and others from the numerous credible documents that are already available.

Bhagat Singh wrote an article in 1928 titled “Naye netaon ke alag-alag vichaar” (‘Varied thoughts of new leaders’) in which he compared Nehru and Bose and hailed them as great patriots and rising stars of the freedom movement. Although Bhagat Singh asked the youth to follow Nehru because of his socialist and internationalist ideals, his article is a reliable indicator of growing charisma and leadership of both Nehru and Bose. Later, on the day when Bhagat Singh was to be hanged by the British, he asked his lawyer who had come to meet him in Jail to especially convey his thanks to Nehru and Bose for the legal and other help they provided in his case. This certainly indicates the mutual regard Bhagat Singh and the two leaders had for each other.

Bose’s popularity was probably next only to Gandhi’s when he was the president of the Indian National Congress (INC) during 1938-39. However that was also the time Gandhi started becoming wary of Bose due to the latter’s willingness to adopting militant strategies as part of the freedom struggle. But more acutely, it was the rightists in the Congress such as Sardar Patel, G D Birla, G B Pant and Rajendra Prasad who began displaying fierce opposition to Bose because he had emerged as a strong leftist pillar in the Congress and whose charisma and dynamic leadership was attracting enormous followers among Congress members and Indians at large. While Nehru too was charismatic and ideologically on the same side as Bose, he, unlike Bose, was not someone who would easily take an independent stand against Gandhi.

When Bose was re-elected Congress president for the second term in 1939 defeating Gandhi’s candidate Pattabhi Sitaramaiah, he was opposed tooth and nail by the rightist group led by Sardar Patel and G B Pant who formally challenged Bose in a resolution put forth by Pant. Gandhi’s statement “Sitaramaiah’s defeat is my defeat” helped only to convey his support for Patel and team. Nehru either did not take a stand or spoke too mutely in support of Bose. Gandhi in his reply to a letter from Bose wrote that “The views you express seem to be so diametrically opposed to those of the others and my own that I do not see any possibility of bridging them.”

Under intense pressure Bose stepped down but was left utterly disappointed. Later, in one of the letters to his girlfriend (later wife) Emilie Schenkl, Bose expressed dismay that the rightist leaders of the Congress had influenced Gandhi against him. Bose also wrote to Nehru that he expected more open support from him and was disappointed that it didn’t come. Later Bose lamented that it “will be tragic for me if I succeed in winning the confidence of other people but failed to win the confidence of India’s greatest man (Gandhi).”

Bose went on form the Forward Bloc as a faction within the INC aimed at consolidating the political left. The British, alarmed by Bose’s radical activities, put him under house arrest. With the help of compatriots, Bose escaped in 1941 and spent most of the next three years in Germany and South-East Asia that saw his heroic endeavour to raise Azad Hind Fauj (or Indian National Army, INA), Free India Center and the Provisional Government of Free India.

Interestingly, his respect for Gandhi and Nehru continued. He saw his efforts and INA as complementing the mainstream freedom struggle led by Gandhi and the Congress. This was most likely due to the deep seated conviction of all these leaders in the secular and liberal values and the criticality of those values not only in the fight for India’s independence but also for her future. It is noteworthy that during 1940s Gandhi and Bose were the two leading pillars of India’s freedom struggle against the British, whereas the Hindutva communal groups like Hindu Mahasabha and Rashtriya Swayamsevak Sanagh (RSS) openly supported the British rulers and played into their game of divide and rule. One of the key leaders of Hindutva, V D Savarkar, had promised in writing his absolute and loyal support to the British government in exchange for his release from life imprisonment.

While Bose had grown sceptical about commitment of some of the rightist leaders in the Congress towards secular and socialist values, he was always deeply inimical towards explicitly communal groups such as Hindu Mahasabha and Muslim League. It was under Bose’s President-ship that members of these communal groups were barred from holding responsible positions in the Congress. In an editorial that Bose wrote in Forward Bloc Weekly on May 4, 1940 under the title ‘Congress and Communal Organizations’, he said, “That was a long time ago when prominent leaders of the congress could be members of the communal organisations like Hindu Mahasabha and Muslim League. But in recent times, the circumstances have changed. These communal organisations have become more communal than before. As a reaction to this, the Indian National Congress has put into its constitution a clause to the effect that no member of a communal organisation like Hindu Mahasabha and Muslim League can be a member of an elective committee of Congress.”

After Syama Prasad Mookerjee (founder of the Bharatiya Jana Sangh, precursor to the BJP) joined the Hindu Mahasabha he wrote in his diary that Subhas Chandra Bose told him if he went about building Hindu Mahasabha as a political body in Bengal, “He (Bose) would see to it, by force if need be, that it was broken before it was really born.”

Bose’s commitment to secular values is also underscored from the fact that while building INA and recruiting cadres from Indian soldiers who were prisoners of war in South-East Asia and from Indian civilians settled in that region, he consciously selected members, leaders and symbols that reflected plurality. For instance, he chose ‘Jana Gana Mana” as the anthem of the Provisional Government of Free India and rejected another candidate ‘Vande Mataram’ on the ground that the former was more secular. Similarly he preferred ‘Jai Hind’ for the salute over ‘Jai Ram’. Later Nehru and his cabinet adopted most of these symbols for independent India. Members of the INA including its top officers came from different religions, regions and ethnicities. Bose’s closest Generals included a Muslim and a Sikh. When, after defeat of Axis powers by Allied forces Bose agreed to escape from Singapore with Japanese help, his only Indian companion from INA in the aircraft was Captain Habibur Rahman.

Bose was also a diehard liberal and believer in women’s equality. He stood his ground against the conservative Japanese Generals and convinced them to let him build an all-women unit of INA, Rani of Jhansi Regiment. Its leader, Captain Lakshmi Swaminathan (later Lakshmi Sehgal), later stood as a candidate for India’s President against the NDA candidate Dr. Abdul Kalam.

On July 6, 1944 in his speech broadcasted by Azad Hind Radio from Singapore, Bose began by seeking blessings from Gandhi for the war he was fighting. It was he who, for the first time, addressed Gandhi as the ‘Father of the Nation’.

Gandhi and Nehru too retained their admiration for Bose. Gandhi called Bose “The Prince among the patriots” and one whose “patriotism was second to none.” When Gandhi was convinced that Bose had indeed died in the plane crash he said that “He (Bose) is living with us in his message and the ideals he placed before the world.”

When captured officers of INA were being tried for treason by the British in late 1945, Nehru was among the four lawyers who defended them in court. The Congress organized INA Relief Committee which provided financial and employment support to INA prisoners after their release. Recent declassification of files by Modi government has revealed that in 1952 Nehru offered financial support to Bose’s widow.

While it is true that Gandhi and Bose had significant differences and it is possible that Nehru viewed Bose as a rival, those differences, misunderstandings and rivalries were normal to expect among strong and independent-minded leaders. Even some serious criticisms about weaknesses of these leaders are relevant,  for example, the undemocratic process by which Bose was sidelined in the INC showed Gandhi’s weakness, Nehru showed timidity by not openly supporting Bose in his conflict with rightists, and Bose’s strategy to rely too much on the Japanese support was fraught with huge risks. However, of much greater import is the fact that for most part they displayed maturity in working together while expressing healthy disagreements, led from the front, exhibited courage, made personal sacrifices, worked with the masses, remained steadfastly committed to secular and pluralist ideals, consistently despised and rejected communal ideologies, and such common core values made them retain respect for each other even when they worked independently.

This holds true not only for Gandhi, Bose and Nehru but also for other prominent leaders of freedom struggle such as Bhagat Singh, Ambedkar and Sardar Patel. They brought in richness of varied thoughts and visions and yet shared certain universal human values. It was largely thanks to these men that independent India got secular and democratic constitution and foundational values. A big challenge we face today is to build on this robust foundation and solve vexing problems such as poverty, unequal opportunities, discrimination against various minorities and Dalits, and corruption and authoritarian biases that threaten to undermine democratic processes.

Rahul Pandey is an entrepreneur, academic and visiting faculty member at IIM Lucknow.