Indian soldiers may have fought alongside the British in WW1, but saying that it was for 'peace' is an ahistorical oversimplification. Soldiers fight under command, not for ideological determinations of what is right and wrong. Vice President M. Venkaiah Naidu visiting an exhibition at the inauguration of the Indian War Memorial at Villers Guislain, France in November on 10, 2018. Credit: PIB

Vice President Venkaiah Naidu recently visited France for the commemoration event marking the centenary of the end of the First World War. While there, he unveiled a monument at Villers, constructed by India, in memory of the more than 9,000 Indian soldiers who died in France during the bloody conflict. Paying homage to the valour of the Indian soldier, Naidu correctly noted that India was not directly involved in the war. The same point was tweeted by Prime Minister Narendra Modi.

There is no doubt that the professional competence, courage and commitment of the Indian soldiers who unflinchingly endured hardships while fulfilling their duty during the great war should be honoured and recalled with respect. However, while doing so, is it necessary to state that these brave men fought for, as Naidu said on his return to India, “the cause of righteousness and the interest of peace, human dignity and freedom”, or as Modi said in his tweet, for “peace”?

While honouring our forbears for the loyalty they showed to their pledges and the difficulties they endured in their chosen path, it is not necessary to overlook historical facts or, as in this case, the causes of war. Their roles and character do not become less worthy if, as a country, the cause for which they fought and in numerous cases paid the ultimate price is not categorised as “peace”.

To begin with, the First World War was a European war. It became global because Japan, Ottoman Turkey and, later, the United States joined the war. The principal European powers and the US were colonial states; thus, the theatres of the war did not remain confined to Europe alone. Consequently, around 1.3 million brave Indian soldiers fought, as Naidu noted, in “France, Belgium, Aden, Arabia, East and West Africa, Turkey, Egypt, Mesopotamia, Pakistan, Persia, Russia, China and Greece”.

Over the past hundred years, historians have assiduously analysed and debated the immediate and long-term causes of the war. Simply put – conditions for the breakdown of the European balance of power came about from the actions of all the major European states over a few decades. There were thus substantial predicates for a conflagration after the heir to the Austro-Hungarian empire Archduke Ferdinand and his wife were murdered in Sarajevo on June 28, 1914 by Serbian radicals. European diplomacy failed to prevent the descent to war. Britain declared war on Germany on August 4, 1914, inevitably drawing in its colonies, including India. 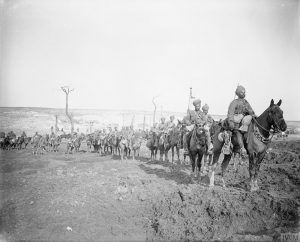 As is usual, all the war-making countries blamed enemy countries and claimed that they themselves had taken to arms in a righteous war fought for peace. This was hardly the case, and to say that the Indian soldier fought for these noble causes is not borne by the historical evidence. Besides, in a war that India was not involved in, it is not necessary to portray Britain’s cause as just. That is the implication flowing from Naidu’s comment that Indian soldiers fought for a righteous cause.

It should never be overlooked that there is a fundamental difference between the proud and valiant army of the Indian republic and the British Indian army – whether it was of the East India Company or directly under the British Crown. The army of the democratic Indian republic has shed its blood in the righteous cause of safeguarding it from foreign enemies and terrorists. This is the army that has fought for human dignity and has, for the nation’s ‘tomorrow given up its today’. This comparison does not in any way diminish the courage and valour of those who were soldiers prior to India’s independence.

The fact is that the relationships of the Indian republic’s institutions with their primogenitors has always been complex and full of contradictions. These stem from the Indian response to British colonialism itself. There has never been a single over-arching freedom movement narrative. This applies equally to ‘Macaulay’s children’ and those who deride them. The national movement that led to India’s independence was not a single-sourced ideological revolution but a broad series of actions, all united in wishing to see India free and responsible for its own destiny. Hence, these contradictions continue and can be seen today in our reactions. Let us turn to a few.

Also read: No Longer Seen as a ‘White War’ or India’s ‘Forgotten War’

On October 22, Modi led the nation celebrating Netaji Subhas Chandra Bose’s declaration of Azad Hind. He must be praised for highlighting Netaji’s inspiring contribution to India’s freedom movement. However, Netaji parted company with Gandhiji on the methods for achieving independence and today we honour both. More to the point, the Azad Hind Fauj comprised of soldiers of the British Indian Army whose actions were completely different to those to whom Naidu paid homage in France.

While the British Indian Army honoured their oath in fighting alongside the British army in the trenches of Europe, some troops also joined the Azad Hind Fauj committed to the cause of India’s freedom. In fairness it must be pointed out that during the Indian National Army trials, the defence team – led by Bhulabhai Desai – argued that once officers had surrendered to Japan and had been instructed, as prisoners of war, to obey the commands of Japanese officers, they relinquished their allegiance to the British King and became free to join a liberation army. Whatever the legality of the action, the Azad Hind Fauj soldiers acted contrary to those in France. After independence the army did not re-induct Azad Hind Fauj soldiers. It is appropriate to for us honour both while remaining faithful to history. 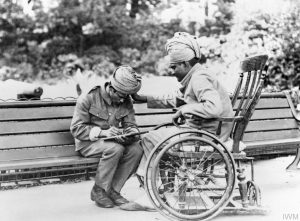 Wounded Indian soldiers at the Royal Pavilion in Brighton, which was used as a hospital for Indian soldiers during the First World War, August 1915. Credit: © IWM (Q 53887)

Indian army regiments who trace their origins to pre-independence have great pride in the military achievements of their forbears. Their focus is narrow. They do not delve into questions of who these ancestors fought and for what purpose. This would be problematic for it would raise issues such as Jallianwala Bagh which occurred within six months of the Armistice. While the focus has correctly been on how army traditions require the chain of command to be respected, a historical dissection of such a narrative yields that statecraft demands for all contradictions not to be reconciled.

After independence, each institution was allowed to resolve how it remembered its pre-independence avatar by itself. In doing so, each one transformed quickly and morphed as required to serving an independent India. For many the pre-independence period and its traditions soon wilted to inconsequence. Some continued with the old traditions but were animated by the new spirit of independence. In some instances, pre-independence conventions endure in an archaic manner. This is seen in the continuance of judges being addressed as ‘Lordships’. It is not clear, if at any time, this mode of address has been actively discouraged. All this has been the manner in which India has dealt with its colonial past.

Naturally, it would be obviously incorrect to compare the deputation of Indian army units to UN peace-keeping functions now to the despatch of the British Indian army soldiers who fought in Britain’s wars.