The Internet's physical library revolves around the sensibility that every cloud needs an anchor. And perhaps fittingly for today, it has managed to highlight the importance of public space and commons. 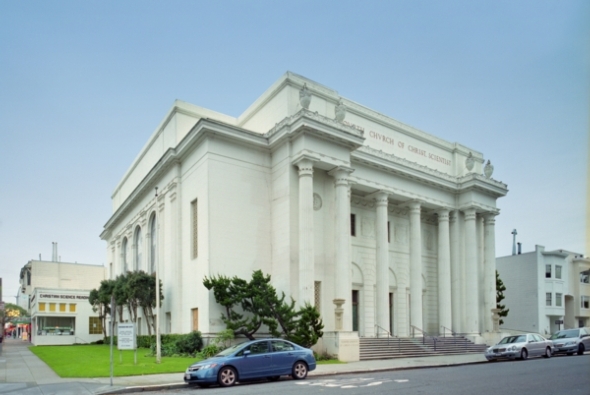 A heavily rusted cast iron ring sits on a bookshelf inside a neoclassical church a few blocks north of San Francisco’s Golden Gate Park. The ring is about an inch deep and as wide as a sheet of paper, and, according to its description, it is a “segment of the original Internet”. It is perhaps better to use the artist’s words to narrate the next part of the installation:

“The Internet was designed by the evil geniuses at the U.S. Defense Advanced Research Projects Agency as a network (sic) would still function during and after a nuclear war. To that end, they constructed a massive labyrinth of heavily fortified tunnels just large enough for meandering cats. Each cat had a component of a message on an electronic chip on its collar; the fragment was useless until combined with the other fragments when all the cats reached the same destination using TCP/IP, or Transfer Cat Protocol/Internet Protocol. That’s the origin of the phrase, “The Internet is a network of tubes, and those tubes are full of cats.”

It is hard to imagine a better home for David Glenn Rinehart’s satirical installation than where it is, the main office of the Internet Archive. Most people are familiar with their website, archive.org, a non-profit library of over 25 petabytes of webpages, films, books, music and software. It is where you can mend broken web-links, see old political advertisements and play old DOS games, all within a few hops. It is one of the world’s largest digital repositories. But all things on the digital cloud do have a brick-and-mortar home.

And the ethos at 300 Funston Avenue makes the visitor acutely aware both of the physical nature of data and the need for a public space around its preservation. The building is a place where both the bricks of data and the bytes of books come to life. At first glance, nothing seems out of place in the church service hall. Pews face a stage flanked by what look like hymn numbers. Then, sustained glances reveal whims. Servers are wedged in spaces along the walls, just behind the pews. Lights on the servers blink any time someone accesses the archive. Old tech T-shirts serve as cushion covers on the pews. “Habla bitcoin” is emblazoned on one, “First mozilla developer meeting, April 7 2000” on another. The hymn numbers on the wall spell out 314 159 265 (pi) and 161 803 399 (the golden ratio). A pendulum hangs from the ceiling, dangling over a stack of hard disk drives perched on a pew armrest. Rinehart, their artist in residence, calls this one “Earthquake detector, 2012 prototype.”

It is as though everything is intended to be found by serendipity. There is no dearth of symbolism around data’s earthly underpinnings at the Internet Archive. Even the people running the ecosystem are archived. More than a hundred terracotta figures stand in the pews and along the side walls of the church – one for each employee who has worked on the archive for at least three years. The artist, Nuala Creed, would spend time chatting with each employee, understanding their ways and including a prop for each figure. Danny Bernstein has a skull in his right hand. Jen Kujath is knitting. Aaron Ximm grips a point-and-shoot. Jyfe Afamasaga cradles a baby. Aaron Swartz, whose figure has acquired a memorial-like status for visitors to the Archive, is tapping on a laptop. Brewster Kahle, the founder of the Internet Archive, commissioned Creed to work on the installation after being inspired by the 2300-year-old Xian terracotta warriors. “In some sense, it makes what you are doing permanent,” Kahle said in a documentary on the ceramic figures. “But in a kind of a bizarre, analog way”. Ceramic figures, one for each employee who has worked in the archive for more than three years, by artist Nuala Creed. Credit: Venkat Srinivasan

When the ancient Library of Alexandria was burned to the ground, the world lost a vast collection of scrolls and books, and a centre for learning. In any discussion around preservation, the ancient library has come to represent society’s loss of memory. The same discussion arose soon after web access went mainstream in the mid-1990s leading to a deluge of content. The Internet Archive started operating in 1996 with grand ambitions – to not repeat the mistakes of Alexandria. “A group of entrepreneurs and engineers have determined to not let this happen to the early Internet,” wrote Kahle in a 1997 Scientific American article.

Thus began the slow and steady process of crawling the web and making a copy of everything out there, from gigabytes to terabytes to petabytes. The Archive adopted a logo of an imposing temple-like structure propped up by columns. Something like an ancient library, something, that is, that might befit a permanent home for memory. California officially recognised it as a library in 2007; Kahle started using the phrase “Alexandria 2.0” to describe the Internet Archive. And in 2009, they got a chance to move to an early 20th century neoclassical church with Corinthian columns. It was an opportunity too good to pass up for Alexandria 2.0. Soon, construction workers started drawing fibre to transform the church into the Internet’s library. That a new library building should have even come up was odd in a year when 40 percent of the nation’s libraries reported flat or decreased operating budgets. For decades, with each passing radio and television wave, people had questioned the role of a library. If a library is a holy space to visit and seek knowledge, what use for it when information could be conveniently dialled in? (The theme for the first National Library Week in 1958 was “Wake Up and Read!”). Then, in the 1960s, when a future etched in bytes seemed more or less inevitable, J.C.R. Licklider led a committee to understanding the changing role of knowledge centres. The target year was 2000. “It freed us to concentrate upon what man would like the nature of his interaction with knowledge to be,” they wrote in the 1965 book, “Libraries of the Future”. Licklider’s work was one of the first extensive reports that discussed a future filled with digital content. The topic hasn’t gone out of fashion in fifty years. In 2014, the American Library Association switched the theme around and launched the Center for the Future of Libraries.

Much of the conversation last year around the role of the new Librarian of Congress was about someone who would pull the Library into the digital century. Brewster Kahle’s name made the rounds, too. Keeping with the times, the call even came with a hashtag: #draftbrewster. President Obama eventually nominated Carla Hayden, the head of Baltimore’s free public library system, to the position. Hayden led the effort to modernise Baltimore’s libraries. But people also know her for championing the role of a library as an essential community space. “The library mattered to people’s lives,” she said. Hayden made the news for keeping the library’s doors open during the days of protest after the death of Freddie Gray in 2015.  To her – and many librarians across the country – the future of a library was similar to its past: a place for people to come together.

So much of an individual’s day revolves around two social environments: home and the workplace. But as Ray Oldenburg describes in his 1989 book, The Great Good Place, a community hinges on the presence of a “third place” like a coffee shop for interaction and a civic society. Librarians increasingly stress that they are custodians of such a third place. A library is a free, enclosed, community space that makes no demands of you, least of all the expectation that you would buy something. There are not that many public places that can say that.

Since the first tax-supported public library came up in New Hampshire in 1833, the nation’s libraries have seeped into the consciousness of society. Nobody is required to go to a library. But, according to a 2013 Pew poll, eight in ten people found it worth their while to step into this third place.

The Archive is a third place unlike any other. It stores petabytes of data generated by the online third place on server racks in the same room that is open to the community for talks and events. The public thus comes together in a place surrounded by content from the online space, sort of a third place housed in a third place.

There can be no cloud storage without the scaffold surrounding it – storage devices, scanners, server racks, cable trays, climate-controlled buildings. It cannot exist without the people doing the preserving. To so much of the world, data that isn’t free doesn’t exist. The archivists are fighting for an open yet preserved repository of the world’s information.

It is easy to see there is no end to this. “We’re trying to do something that’s actually impossible,” said Alexis Rossi, Director of Media and Access at the Internet Archive. To not repeat the mistakes of ancient Alexandria, the Archive maintains backups at other places, including one at modern Alexandria. This preservation obsession is captured in what Rossi calls the “cockroach test” – data that survives the apocalypse with its meaning intact.

Servers in a church, terracotta figures of tech employees and a backup in Alexandria have an element of whimsy. But there is much value in symbolism. It’s useful to reiterate that people help preserve data. And a library built around the physicality of data can rally a community together.

Granted, the Internet Archive’s mainstay is its First Life, where it has to keep plodding away to amass more data, more copies, more from non-English speaking communities. It then has another challenge – to curate and make sense of the data. But perhaps the bigger struggle, decade after decade, is to cement the future of a library in a community. Libraries are custodians of our collective knowledge and a public gathering space for reflection and debate. As Robert Putnam writes in his 2003 book, Better Together: Restoring the American Community, “People may go to the library looking mainly for information, but they find each other there.”

There is no pressing need to house a bunch of servers in a church, in a residential neighbourhood, and especially in a city where it is increasingly difficult to survive on a librarian’s salary. No need, that is, except the possibility of being a community fixture. The Archive could of course do much more to engage the public. But the Internet’s physical library revolves around the sensibility that every cloud needs an anchor. And packed audiences at events like last year’s Library Leaders Forum underline the power of this digital library as a community centre. Perhaps fittingly for today, a server farm has managed to highlight the importance of public space and commons.