Shinzo Abe, the Tokyo Trial, and India: A Tricky Legacy

Does a memorial statue for Radhabinod Pal, the iconic dissenter in the Tokyo war crimes trial, really belong at the Yasukuni Shrine in Tokyo? 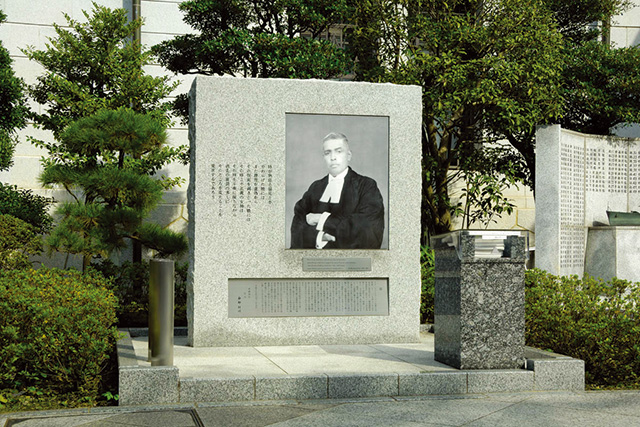 In a country where spirits of the dead inspire reverence, anxiety, and fear, the matter of holding a state funeral for a former prime minister – post-War Japan’s longest-serving, and one of the most consequential – should not be controversial. Yet the state funeral to be accorded to Shinzo Abe on September 27 has become contentious. Critics accuse the Fumio Kishida government of politicising Abe’s death and disregarding the divisive nature of his legacy.

In India, Abe will be long remembered for his role in bolstering the country’s relations with Japan. It was appropriate for India to observe a day of national mourning at his passing. But Abe’s push for a revisionist rewriting of Japan’s wartime history, which is a major factor in what makes his legacy controversial, runs the risk of implicating India.

It could present a prickly problem for India’s broader interests in Asia, not only vis-à-vis China, but also other countries that Imperial Japan invaded and colonised or occupied. Japan’s imperialistic aspirations may have been partly a function of its quest for parity with European colonial powers. But the atrocities committed by Japan during that period – mostly felt in Asia – were real.

Abe was, of course, instrumental in the founding of the Quadrilateral Security Dialogue or Quad – the grouping that brings India together with Japan, Australia, and the US. He first laid out his vision of the Indo-Pacific as a single strategic space in a speech to the Indian parliament in 2007.

Abe didn’t specifically mention the Quad in that speech. He spoke only of a new “broader Asia”, which is “at the confluence of the two seas”, and of the imperative that “democratic nations located at opposite edges of these seas” come together. Abe, however, mentioned an item on his itinerary for that visit, whose significance cannot be overstated.

Also read: A Cold War Relic and the Crime That Killed Shinzo Abe

Abe said to the Indian parliament that he was flying to Kolkata the next morning to meet the son of Justice Radhabinod Pal (1886-1967), the iconic dissenter in the Tokyo war crimes trial. Justice Pal, he said, “is highly respected even today by many Japanese for the noble spirit of courage he exhibited during the International Military Tribunal for the Far East”.

Pal, in fact, rejected the legitimacy and authority of the tribunal. He famously called the majority view an instance of victor’s justice. He took the position that “each and every accused must be found not guilty of each and every one of the charges in the indictment and should be acquitted of all those charges”.

Twenty-eight high-ranking Japanese military and political leaders were tried and 25 of them were found guilty. Seven, including Japan’s wartime prime minister Hideki Tojo, were sentenced to death by hanging, 16 to life imprisonment, and two to lesser terms.

Abe’s extraordinary gesture of respect for this dissenting Indian jurist – six decades after the trial – can only be understood in the context of the history wars that have riven Japan domestically, and in its relations with countries in East Asia. 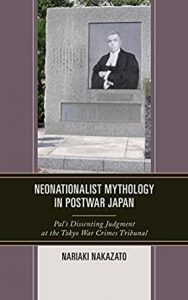 Nariaki Nakazato is a distinguished Japanese historian of South Asia, especially of colonial Bengal. His 2016 book on Pal’s dissent Neonationalist Mythology in Postwar Japan provides important insights on this issue. The mythologizing of Pal in Japan didn’t happen spontaneously; a section of the Japan’s conservative and pro-military elite created and propagated the “Pal myth”.

When the Tokyo trial verdicts were announced, the Japanese public accepted them quite readily. Pal’s dissent didn’t generate much interest. Most people thought their leaders had led them to a reckless war that caused them extreme distress and hardship; they deserved punishment.

Only those convicted or accused of war crimes and their supporters treated Pal’s dissent as an exoneration. Before going to the gallows, Tojo left a haiku written in Pal’s honour with his wife. Conservative and right-wing politicians, intent on restoring the dignity of Imperial Japan, says Nakazato, seized on Pal’s dissent as vindication of the view that the Japanese fought a just war for self-defense and the liberation of Asia, not an aggressive war for which it bears political and moral responsibility.

By the 1990s, Pal became a symbol of an ascendant neonationalism in Japan. His dissent came to be cited by polemical neonationalists, who draw upon its authority to criticise the Tokyo trial.

In 2005, a monument dedicated to Pal was installed at Tokyo’s Yasukuni Shrine that honours the nation’s military war dead.  The monument has a photograph of Pal magnified many times, and a silver plaque with an engraved inscription of four key lines from his dissent. In effect, Pal was accorded canonical status in the “Yasukuni view of history” that challenges what is pejoratively called the “Tokyo-trial view”. The Pal monument sits between the Yasukuni Shrine and the Yushukan, Japan’s military history and war museum.

In 1978, the souls of 14 convicted war criminals including Japan’s wartime leader Hideki Tojo and Iwane Matsui, who ordered the Nanjing Massacre of 1937, were quietly enshrined at Yasukuni. Visits to the shrine by serving Japanese prime ministers, which includes Abe, have since become a great source of regional outrage.

Also read: Japan, Asia and India – The Many Legacies of Shinzo Abe

Remarkably, the Pal monument at Yasukuni was inaugurated during the 60th anniversary year of the end of the Second World War. That was a time when Japan’s post-war pacifism came under growing pressure from neo-conservatives like Abe; and Japan’s history problem – the perception that Japan has not shown enough contrition for its imperial excesses – had escalated to a new level.

Fortunately, the monument in Yasukuni – the ultimate appropriation of Pal by Japan’s war revisionists – is not the only memorial for Pal in Japan. There is, for instance, a stone monument dedicated to the memory of Pal and Yasuburo Shimonaka – educator, publisher, World Federalist, and a friend of Pal – on the shore of Lake Ashinoko in Hakane near Tokyo. On it is inscribed a humanist verse written in Bengali in Pal’s own hand, “Sobar upare manush satya, tahar upare nai (Man is the ultimate truth, there is nothing above man)”, which is attributed to the fifteenth century Bengali poet Chandidas.

Does a memorial statue for Pal really belong in Yasukuni?

Sanjib Baruah is Professor of Political Studies at Bard College, New York, and is the author of, most recently, In the Name of the Nation: India and its Northeast.