The Revolution and Russian Imperialism 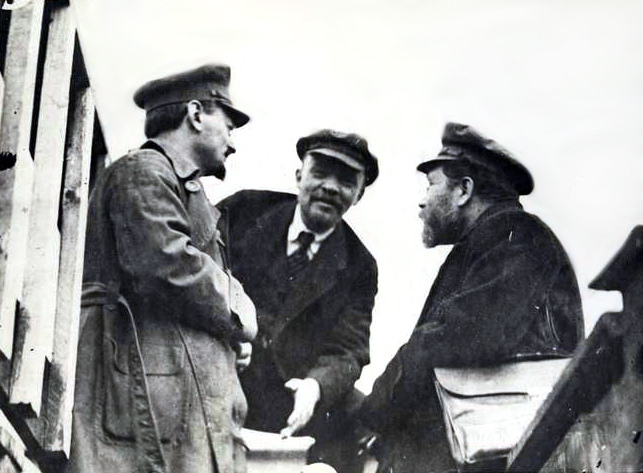 Unlike Western imperialism, which colonised overseas territories, the Tsarist empire expanded by annexing adjacent territories from the Arctic Ocean in the north to the Black Sea in the south, from the Baltic Sea in the west to the Pacific Ocean in the east. As a genuine anti-imperialist, Lenin was as opposed to Great-Russian imperialist annexation of the territories of non-Great-Russian peoples as he was to Western imperialism, and he made this clear in his Preface to Imperialism, the Highest Stage of Capitalism, when it was published in 1917.

However, many of Lenin’s colleagues opposed his policies favouring the right of Russia’s colonies to national liberation. After Finland’s independence was recognised in 1917, no other nation received the same treatment; but the larger nations of Ukraine, Belorussia, Georgia, Armenia and Azerbaijan became independent Soviet republics, while smaller nations within the boundaries of the Russian Soviet Federative Socialist Republic (including the Central Asian nations) became autonomous republics and autonomous regions responsible for matters of local government, education, culture and agriculture. A range of policies aimed at promoting the national, economic, and cultural advancement of the non-Russians were pursued: priority to the local language, a massive increase in native language schools, development of national cultures, and staffing the Soviet administration as far as possible with local nationals.

Lenin did not arrive at this position entirely on his own; indeed, in the early 20th century, his position and that of the Iskra current to which he belonged was extremely unsympathetic to national liberation struggles in the colonies of the tsarist empire. Eric Blanc shows that it was non-Russian Marxist parties in the empire’s periphery – especially in Poland, Latvia, Lithuania, Ukraine and the Caucasus – who were arguing the positions subsequently articulated by Lenin. These parties, despite being committed in theory and practice to opposing ethnic nationalism and building proletarian unity across national divisions, emphasized the need for national independence as well as the autonomy of their own parties in relation to the Russian Social Democratic Workers’ Party. He was also influenced by the Tatar Bolshevik Mirsaid Sultan-Galiev, who argued that the socialist revolution could not succeed without the participation of the colonised peoples of the East.

Lenin became supportive of national liberation struggles as a result of the debate with these borderland Marxists, the capitulation of Second International leaders to their ruling classes’ war drive in World War I, and because of his own analysis of imperialism. The central leadership in the party largely stood with him, but many Bolsheviks opposed him, including ‘Russified’ party members from some of the colonised territories. Foremost among them was Joseph Stalin.

Lenin suffered a stroke that left his right hand and leg paralysed and his speech impaired in May 1922, the year in which Stalin was appointed general secretary. Subsequently, Lenin suffered two more severe strokes. As Lenin was marginalised Stalin’s power increased. The dispute over national liberation came to a head during this period. Lenin opposed Stalin’s attempt to incorporate the five independent republics in the Russian Federation, but Stalin went right ahead with his plans, and Lenin was powerless to stop him. The most he could do was to dictate what came to be called his ‘Testament’, including, on December 30-31 1922, his path-breaking reflections on the national and colonial question.  These really deserve to be read in full, but can only be summarised here. 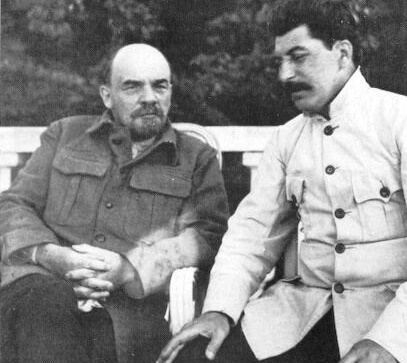 Starting with an incident that had disturbed him deeply – a physical assault by Stalin’s emissary on a Georgian comrade who disagreed with the plans that were being thrust on them – Lenin remarked that ‘in such circumstances the “freedom to secede from the union” by which we justify ourselves will be a mere scrap of paper, unable to defend the non-Russians from the onslaught of that really Russian man, the Great-Russian chauvinist, in substance a rascal and a tyrant.’ He insists that the nationalism of oppressed nations must be distinguished from the nationalism of oppressor nations, and notes that ‘we, nationals of a big nation, have nearly always been guilty, in historic practice, of an infinite number of cases of violence; furthermore, we commit violence and insult an infinite number of times without noticing it.’

He concluded that ‘It would be unpardonable opportunism if, on the eve of debut of the East, just as it is awakening, we undermined our prestige with its peoples, even if only by the slightest crudity or injustice towards our own non-Russian nationalities. The need to rally against the imperialists of the West, who are defending the capitalist world, is one thing. There can be no doubt about that and it would be superfluous for me to speak about my unconditional approval of it. It is another thing when we ourselves lapse… into imperialist attitudes towards oppressed nationalities, thus undermining all our principled sincerity, all our principled defence of the struggle against imperialism.’

Lenin died in January 1924, without ever having the chance to argue for these principles within the party. His notes were suppressed by Stalin, and with good reason: Stalin’s own policies were the polar opposite of what Lenin subscribed to. Sultan-Galiev was subjected to a show trial – the first Bolshevik to suffer this fate – and was later arrested and shot. In the 1930s, Stalin’s policies of mass murder of Ukrainian intellectuals and priests and forcible extraction of grain from Ukrainian peasants even as millions of them starved to death were described by Raphael Lemkin, who invented the term ‘genocide’, as ‘the classic case of Soviet genocide’, and he added, ‘What we have seen here is not confined to Ukraine. The plan that the Soviets used there has been and is being repeated.’ As Timothy Snyder points out in Bloodlands: Europe Between Hitler and Stalin, ‘The Muslim nations of the Caucasus and Crimea were especially targeted; between 1943 and 1944 the entire Karachai population, Kalmyks, Chechen and Ingush peoples, Balkars, Crimean Tatars and Meshketian Turks were rounded up and expelled; those who could not be moved were shot, their villages burned to the ground.’

Snyder also points out that the Hitler-Stalin pact signed by Ribbentrop and Molotov on August 23, 1939 had a strong imperialist dimension. Stalin was well aware of Hitler’s politics by then, but that did not deter him from forming an alliance with him, even going so far as to adorn Moscow airport with swastikas when Ribbentrop arrived there. The pact did not merely guarantee mutual non-aggression. In its secret protocols, Hitler agreed to give Finland, Estonia, Latvia, Lithuania and part of Poland to the Soviet Union, while Stalin committed the Soviet Union to providing food products and raw materials to the Nazis in return for finished products like machinery from Germany. Thus Stalin was effectively a Nazi collaborator for most of the first two years of the war, until Hitler abrogated the treaty in June 1941. 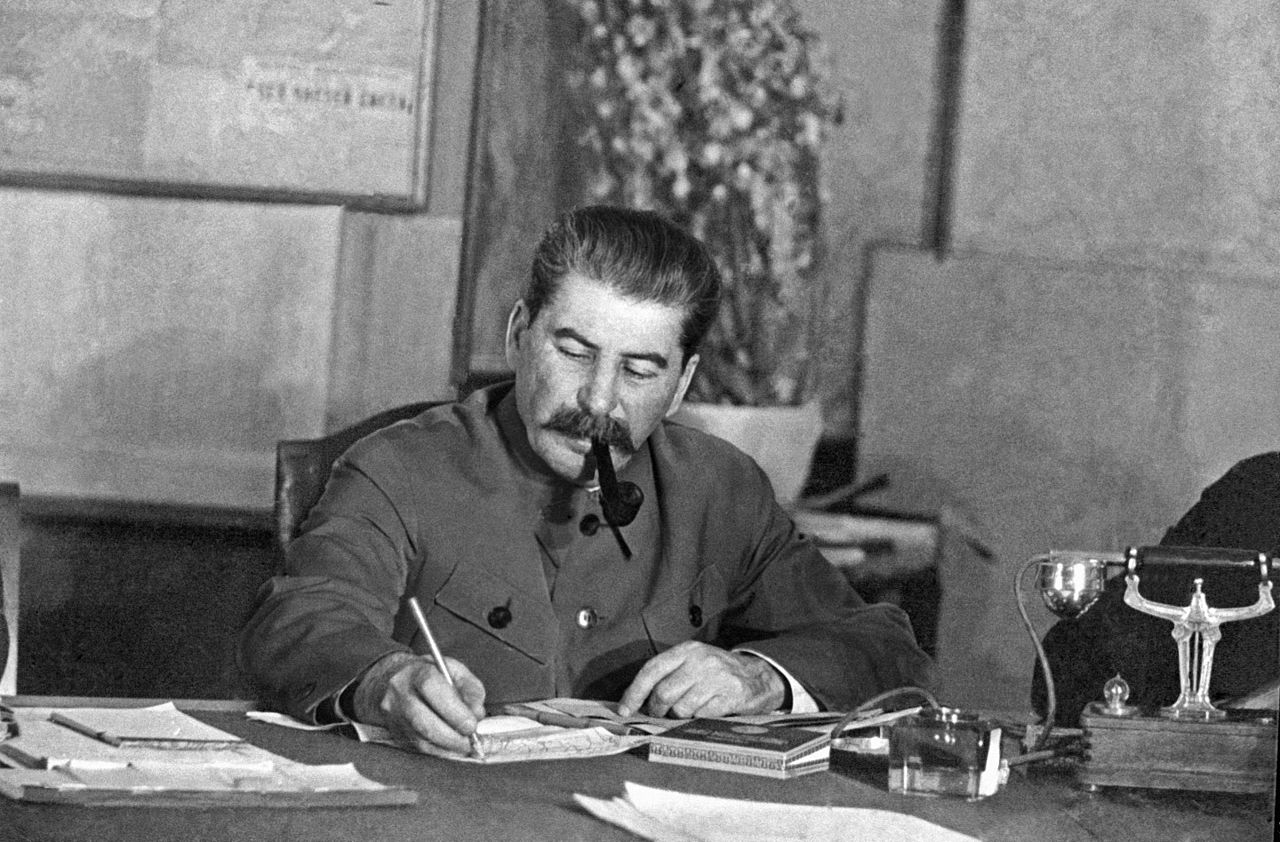 After the Yalta Conference in February 1945, Moscow-dominated regimes were set up in Poland, Hungary, Czechoslovakia, Romania, Bulgaria, Albania, and later East Germany. This pattern resembles US imperialism, with friendly dictators being installed and supported by the imperial power, and military incursions taking place only when the regime is threatened with being overthrown. Rory Fanning and Brian Bean describe how Stalin set up the World Peace Council (WPC) for the purpose of using Communist Parties outside Russia to further the foreign policy aims of the USSR. ‘But as other socialists and opponents of war recognized at the time, the WPC’s parroting of Stalinist foreign policy left the council in the position of defending Russian “peace-loving” tanks when they moved in to crush workers’ uprisings in Hungary in 1956 and Czechoslovakia in 1968, among other rebellions that had broken out in  USSR’s Eastern European empire. The WPC also supported the Russian invasion of Afghanistan starting in 1979… This “peace-loving” invasion left over a million dead, hundreds of thousands disabled, huge numbers made refugees and the countryside littered with mines.’

Lenin has rightly been criticized for the part he played in the inauguration of a post-revolution authoritarian state, but he has not been given sufficient credit for fighting against Russian imperialism. Mikhail Gorbachev attempted to go back to Lenin’s anti-imperialism by refusing to invade East Germany in 1989 when the Berlin wall came down, and tried to move to an equal and voluntary association between Russia and the other Soviet republics in 1991. But Stalinist hardliners staged a coup and put him under house arrest. Paradoxically, this hastened the disintegration of the Soviet Union by sidelining Gorbachev, who wanted to democratise it, and empowering Boris Yeltsin, who headed the opposition to the coup but had no interest in preserving the Soviet Union because Gorbachev was not just trying to democratise Russia (the nation) but the Soviet Union as a whole.

Vladimir Putin, who succeeded Yeltsin, returned to imperialist policies, from his brutal war to crush the Chechen independence struggle to the annexation of Crimea. It is a pity that Lenin’s legacy against Russian imperialism has been overshadowed by that of his genocidal successor.