Remembering the Maulvi Who Embraced Socialism to Overthrow Imperialism

Maulvi Barkatullah Bhopali believed the spirit of Marx’s thought and divine religions was the same. "The objective of both is to provide a dignified and peaceful life to the oppressed." 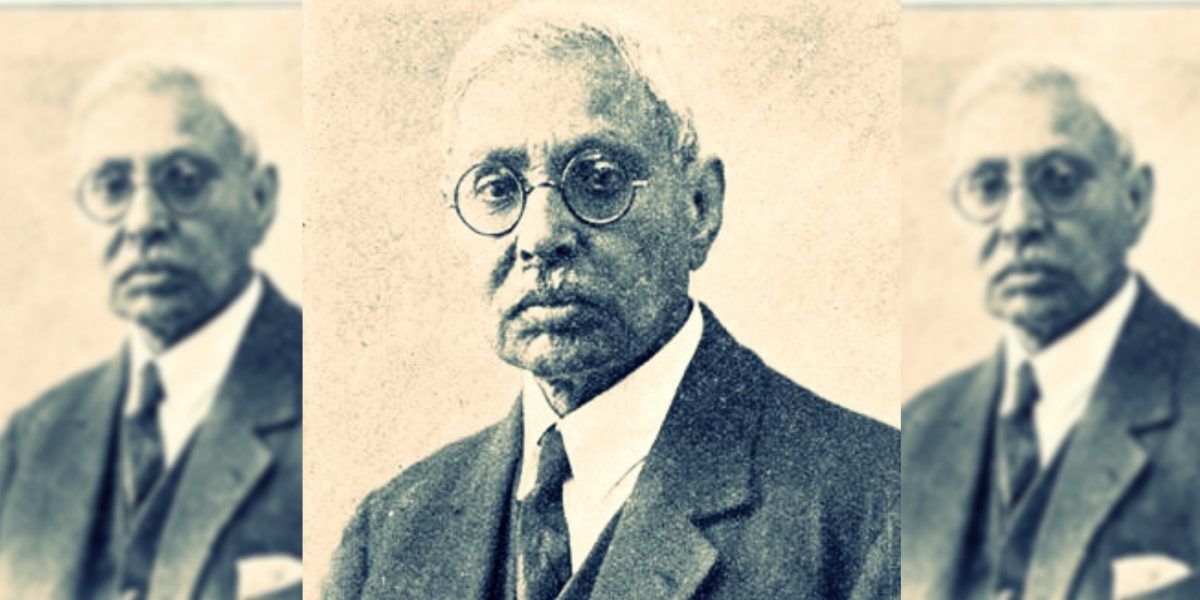 Maulvi Barkatullah Bhopali, who was born 164 years ago this month, was a glorious standard-bearer of the Indian independence movement. He toured Great Britain, Europe, Japan and America, in addition to the Soviet Union in connection with the struggle against British imperialism. He was among those few ulema who travelled to Moscow in May 1919, just a short period after the Bolshevik Revolution; he saw the conditions there with his own eyes, and met Lenin and other Bolshevik leaders. During his stay in Moscow, he said during an interview with the Izvestia newspaper:

“I am not a communist or a socialist, but right now my political program includes throwing the British out of Asia. I am a staunch enemy of European capitalism in Asia. Therefore, there is complete compromise between myself and the communists over these objectives and we are allies on this field. I do not know what shape the future events will take, but what I can definitely say is that the famous appeal of the Soviet government of Russia, in which the people of all nations have been requested to rise up and conduct jihad against capitalists, has greatly influenced us, and what we like more than that is that the Soviet Union has revealed all the secret agreements (between Russia and Great Britain) whose objective was to enslave other nations, especially the Eastern nations. Not only this, but the Soviet Union has unilaterally cancelled all such agreements. Russia accepts the principle of equality and evenness between all small and great nations. The ideas of the Bolsheviks, which we call socialism, are also making a place in the hearts of the common Indian people.”

In his book, Bolshevism and Islamic Nations, Maulvi Barkatullah writes, “The actual spirit of Marx’s thought and divine religions is the same. The objective of both is to provide a dignified and peaceful life to the oppressed, punished people of god by freeing them from cruelty and oppression.”

“The philosopher Plato has presented such a map of his ideal Republic in which ownership would be common and public. The provision of basic needs, sources of entertainment, opportunities for employment will be equal for all. Because of the progress of education, every individual of the nation will benefit from knowledge in a way that his every act will be reasonable and right. These are the basic principles on whose foundation Karl Marx presented the majestic structure, behind which was the knowledge and experience of many generations,” he continued.

Maulvi Barkatullah bemoans the fact that in his time, there is not even a single Muslim kingdom which can be called independent in a meaningful sense. He writes, “Today not even a single independent Muslim state remains because Muslim countries have been subdued at the hands of British imperialism and the dictatorial royal tsar, French or Italian colonialism in the 20th century. They are being fully exploited.”

But he is not hopeless with this situation. He says,

“There is no cause for hopelessness. After the dark night of the czar’s oppression and tyranny, the dawn of human freedom has arisen on the horizon of Russia in which Lenin is giving the good news of human prosperity, sprinkling the light of his ideas like the sun (sic). That grand scheme which was presented 2000 years before by the philosopher Plato, which was transferred as a great heritage from one generation to the other; today the principles and ideologies of this ideal republic are being given practical shape. Under the leadership of Lenin, this is being popularly accepted as a reality. Across the length and breadth of Russia and in Turkistan, the entire arrangement and administration has been given to workers, people employed in agriculture and ordinary soldiers. The equal rights of all classes and nations have been accepted, every individual has been guaranteed a better life.’

Maulvi Barkatullah not only completely supported the Bolshevik government of Russia, but appealed forcefully to the Russian people, especially the Muslims of the eastern region, to support the Soviet government wholeheartedly and array themselves against its enemies so that the successes of the revolution could be defended; and the intervention and conspiracies of the imperialists could be countered.

He says, “Now the time has come that the Muslims of the whole world and Asian nations obtain complete information about Russian socialism, understand those golden principles and accept them with full passion and sincerity. The noble and high objectives hidden in the foundation of this modern system demand that Muslims should completely support and defend it. They should unite with Bolshevik forces to make the aggression of British followers and other tyrant rulers unsuccessful; send their children to Russian schools without wasting time so that they can obtain modern science, high arts, practical physics, chemistry and mechanical technique.’

In her book, Haj to Utopia, Maia Ramnath writes that Barkatullah “single-handedly embodied the overlap between the Bolshevik and Pan-Islamist networks, utilising the connective tissue of the Ghadar infrastructure to do so. She cites a foreign office report of 1915 as saying: “It would appear that Barkatullah  was a sort of connecting link between three different movements, namely, the Pan-Islamic, Asia for the Asiatics and the Indian Sedition”. A German diplomat wrote that he was “first in line a nationalist and then a Moslem”.

Maulvi Barkatullah’s was a warrior life. He passed away in San Francisco on September 20, 1927. 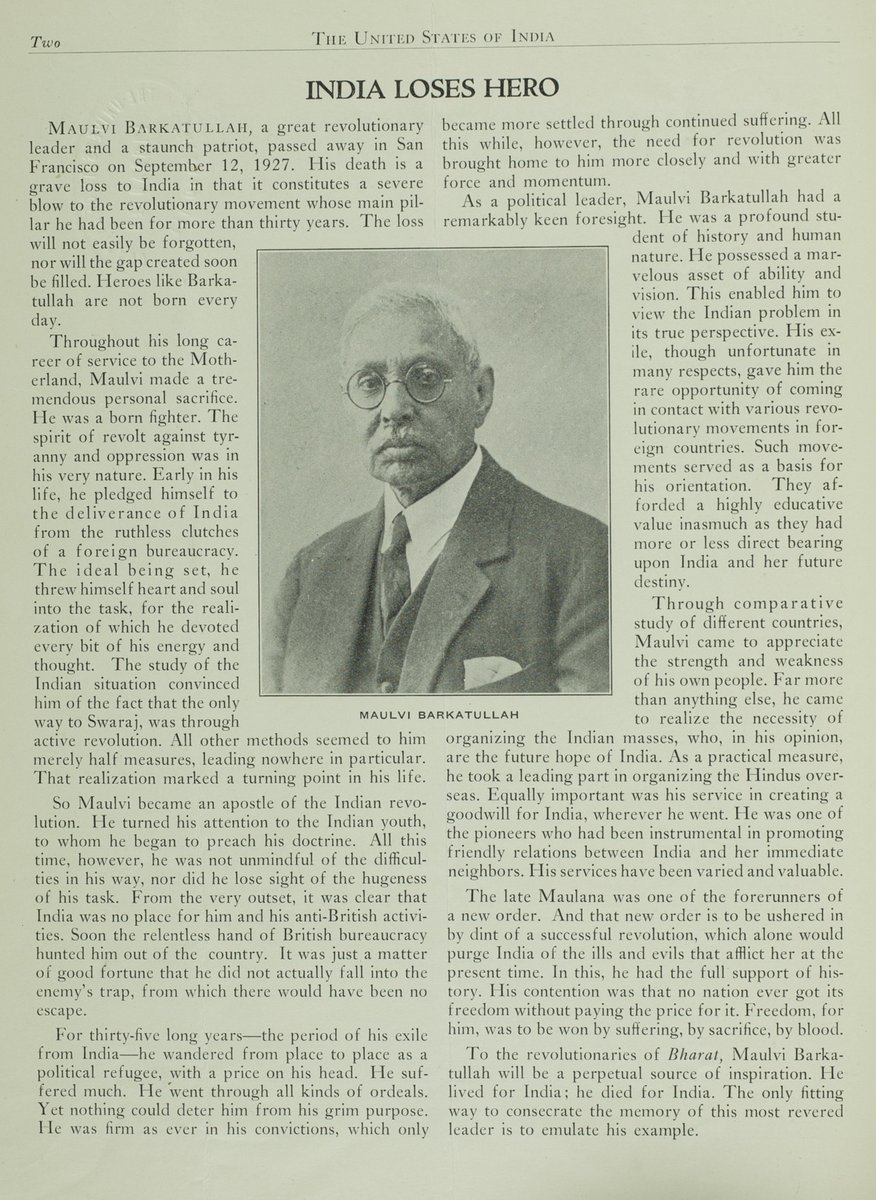 Barkatullah had been one of those who had backed the Ghadar uprising against the British during and after World War I. In a tribute to him after his death, published in the United States of India, a publication of the Ghadar Party in the US, the magazine wrote:

“To the revolutionaries of Bharat, Maulvi Barkatullah will be a perpetual source of inspiration. He lived for India; he died for India. The only fitting way to consecrate the memory of this most revered leader is to emulate his example.”

Raza Naeem is a Pakistani social scientist currently teaching in Lahore. He is also the president of the Progressive Writers Association in Lahore. His most recent work is an introduction to the reissued edition (HarperCollins India, 2016) of Abdullah Hussein’s classic novel The Weary Generations. He can be reached at: razanaeem@hotmail.com.