The ancient iron pillar standing in Delhi’s Qutb Minar complex is popularly described as a ‘trophy of conquest’. In fact, it marked the cultural continuity of a royal practice in ancient and medieval north India, of re-using and re-inscribing pillars erected by predecessors. 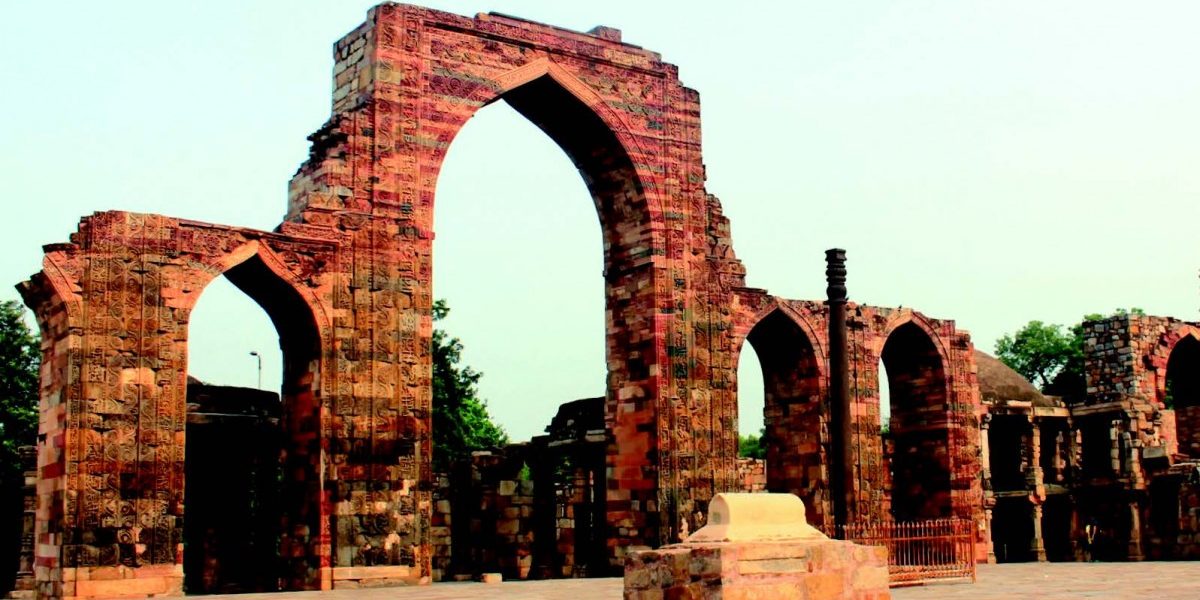 The iron pillar in the courtyard of the Masjid-i-jami, or the Qutb Mosque, which is now known as the Quwwat-al-Islam Mosque. Photo: Shashank Shekhar Sinha

When a historical artefact travels across space and time, it often creates multi-layered meanings that add to the richness of the contexts it inhabits.

The history of the Mehrauli iron pillar offers an interesting case in point. The small and modest looking structure currently standing in the courtyard of the jami masjid or congregational mosque in the Qutb Minar complex has a long and multifaceted past. Its multiple journeys and lives – straddling dynasties, geographies, cultures and time periods – present a fascinating tale.

A lay person visiting the Qutb complex, which is now a UNESCO World Heritage Site, may not get a sense of the pillar’s intriguing past for several reasons. Its location between imposing structures, representing the art and architectural traditions of the Turks, tends to obstruct its visibility.

Also, narratives of local guides taking tourists around the Quwwat al-Islam (‘Might of Islam’) mosque, as the jami masjid is now known, are largely soaked in tales of destruction of the 27 Hindu and Jaina temples and the building of the congregational mosque by the Turks.

The guides do not, however, forget to mention that the pillar has remained corrosion resistant and rust free in more than 1600 years of its existence. Scientists attribute this unique distinction to the pillar’s high-phosphorus and low-sulphur content and to the significant advances India had made in the field of metallurgy and casting in ancient times. No wonder the image of the iron pillar is the emblem of two premier scientific organisations dealing in metals – the National Metallurgical Laboratory and the Indian Institute of Metals.

The pillar has had a more popular constituency, stemming from its perceived identity as a bringer of good luck. It was believed that if a person standing with her back to the structure could clasp her hands while putting her arms around it, her wish would be fulfilled.

R. Balasubramaniam, a noted archeo-metallurgist, who has worked extensively on the Mehrauli pillar, says this popular belief was prevalent even before J.D. Beglar, assistant to Archaeological Survey of India’s first director general Alexander Cunningham, got a base for the pillar constructed in the late 19th century.

Balasubramaniam mentions a free-hand sketch of the pillar by an artist named Mirza Shah Rukh Beg, in Sayyid Ahmed Khan’s Urdu book on monuments of Delhi Asar-al-Sanadid (1847), which shows people trying to clasp the structure.

Also read: The Battle of Pollilur: Revisiting the Footnotes of History

The belief persisted afterwards too. For those visiting the Qutb complex till about the mid-1990s, it was a common sight to see people thronging the pillar site to try their luck. Fearing that the historical structure might get corroded by the physical touch of innumerable visitors, in 1997 the site administration decided to erect a fence around it. Interestingly, the fence has heightened the visibility and presence of the structure and the curiosity surrounding it.

The pillar and its early history

The pillar weighs over six tonnes and is around 23.6 feet (7.08 metres) tall, of which 3.6 feet (1.08 metres), is buried below the ground. It is surmounted by an inverted lotus capital over which there are three fluted discs (amalaka) supporting a square pedestal. There is a deep hole on the top of the pillar which possibly supported an image of the legendary bird Garuda, regarded as the vehicle of Lord Vishnu.

The oldest and longest inscription on the pillar, which is in Sanskrit, records the military prowess and achievements of a king named Chandra. The translation and transcription of the complete inscription can be seen on the wall in the northern gallery of the mosque. The English translation of the inscription’s concluding part reads:

“[The pillar was erected by] that king who acquired Supreme sovereignty on earth for a very long time by his own promise [and] who, having the name Chandra and the beauty of countenance resembling the full moon, having fixed his mind with devotion on Vishnu, this lofty standard of the Lord Vishnu was set up on Vishnupada hill (emphasis added).” 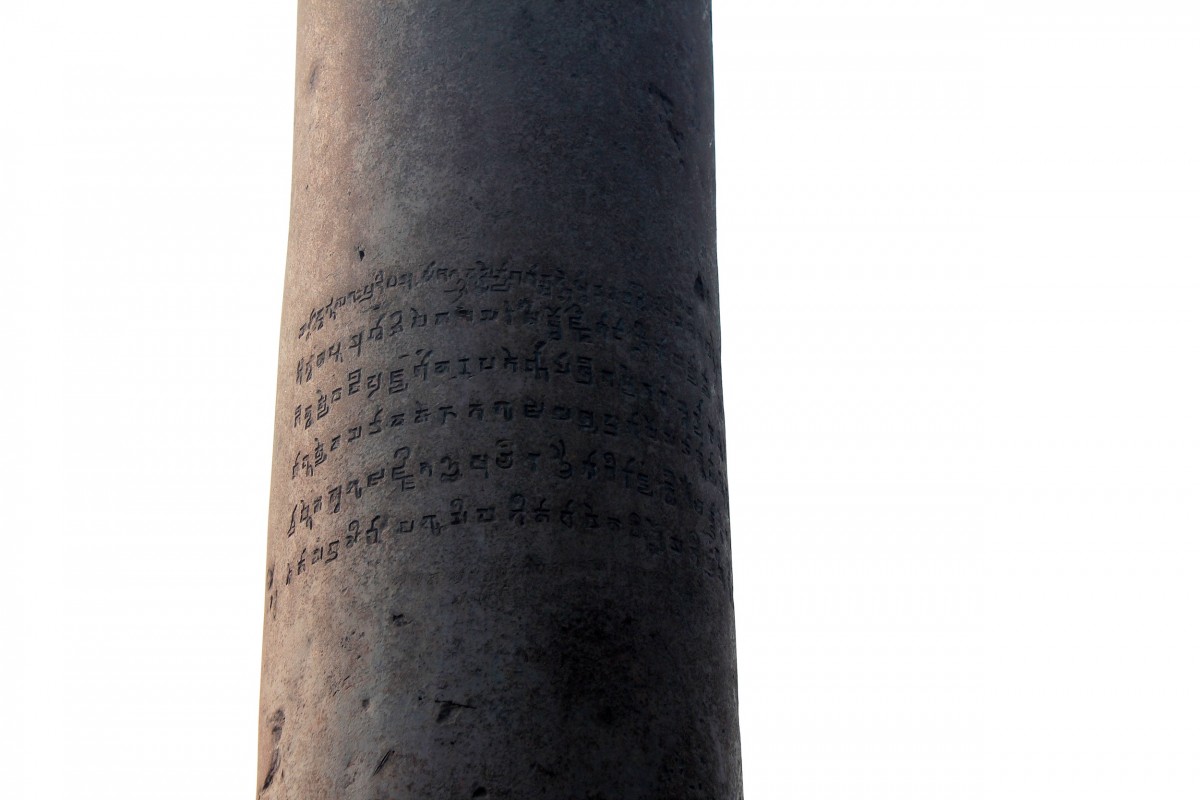 One of the inscriptions associated with the original installation of the iron pillar. Photo: Shashank Shekhar Sinha

Historians and archeologists have identified king Chandra with Chandragupta II (c 375-413/15 CE) of the Gupta dynasty. The king is referred to as Chandra in his coins, particularly his gold coins where his short name appears alongside his full name and he is depicted as an archer.

The Guptas ruled over large parts of north India between CE 300-600. The core empire of the Guptas included modern Bihar, Uttar Pradesh and Bengal, the highlands of central India and parts of the east coast. Historian Upinder Singh clarifies that, through successful military campaigns, the Guptas established a network of political relationships of paramountcy and subordination over a large part of the Indian subcontinent.

Singh says Delhi seems to have formed a part of Chandragupta II’s empire and the Mehrauli pillar inscription suggests that he also fought against a confederation of enemies in Bengal and led a campaign into the Punjab. However, Delhi does not have a location which approximates to the description of Vishnupada giri (hill) mentioned in the inscription. So, the pillar was probably brought from somewhere beyond Delhi.

Conflicting accounts about the pillar

Balasubramaniam explains that the pillar originally stood in front of Cave no 5 which contains a bas-relief depicting one of the ten incarnations (avatars) of Lord Vishnu as mentioned in the Puranas, namely the varaha, or boar. In this avatar, Vishnu is depicted as the divine boar who lifted the earth from the depths of the primeval ocean, where it had been dragged by a demon called Hiranyaksha.

Also read: Bhopal: Minto Hall and the Obliteration of the Many Realities that Make Us Indian

Balasubramaniam and scholars like Michael Willis and Meera I. Dass argue that the location of the Udayagiri caves on/near the Tropic of Cancer (23 ½ degree north) had a special astronomical significance and that the iron pillar had a specific location within this astronomical diagram. The location was such that on the summer solstice day, the early-morning shadow of the pillar would fall along a specially cut passageway in the direction of the varaha bas relief.

From the Gupta coins and inscriptions, it is easy to establish that their rule extended into Malwa and western India and included the Vidisha region. Balasubramaniam points out that the Udayagiri cave temples also possess the unique distinction of being the only works that can be personally associated with Chandragupta II.

She explains that the king’s connection with Vaishavism is well known and the term parama-bhagavata (indicating a very close association with Lord Vishnu) became a common imperial title for the Gupta kings from his reign onwards. In an article in The Wire on the Pillar of Heliodorus, I had discussed how Vidisha, an important centre of trade and religious activities, had become associated with the Vaishnava cult even before the Gupta period.

The Iron Pillar and the Rajputs of Delhi

Who brought the pillar to Delhi, and when? At some point of time the pillar was moved out of Udayagiri and Vidisha, but we don’t know when. Around the middle of the 11th century, a Rajput ruler called Anangpala, belonging to the Tomar dynasty, is known to have erected the pillar in front of a temple when he developed a fortified settlement, Lal Kot (literally red fort) in the Mehrauli region.

A legend, killi-dhilli-katha (the story of loose nail/pillar) mentioned in the epic poem Prithviraja Raso, popularly attributed to Chand Bardai, a courtier of the Chauhan king Prithviraj Chauhan, connects the pillar with the Tomar Rajputs.

According to the killi-dhilli-katha, a learned Brahmin once told the Tomar king Ananagpala (also known as Bilhan Deo) that the pillar was rooted deep in the ground and rested on the hood of Vasuki, the mythical serpent king who supported the world from below. The Brahmin had prophesied that as long as the pillar stood firm, the king’s dominions would remain safe.

According to a popular tradition based on this legend, the name Dilli, as the city was known in early medieval times, is derived from the story of dhilli killi. Interestingly, a short inscription on the iron pillar credits Anangapala with the establishment of Delhi as a city around 1052 CE.

The Turks and the politics of appropriation

Who brought the pillar to its current location in the congregational mosque, and when? It is conventionally held that the Turks, after their conquest of Delhi, brought the pillar from the main temple in the Lal Kot complex to its current location in the jami masjid. In the process of re-assembling, Balasubramaniam highlights, a part of the pillar, which was initially buried underground, was placed above the ground level. Since then, the pillar has stayed in this state in the mosque complex. 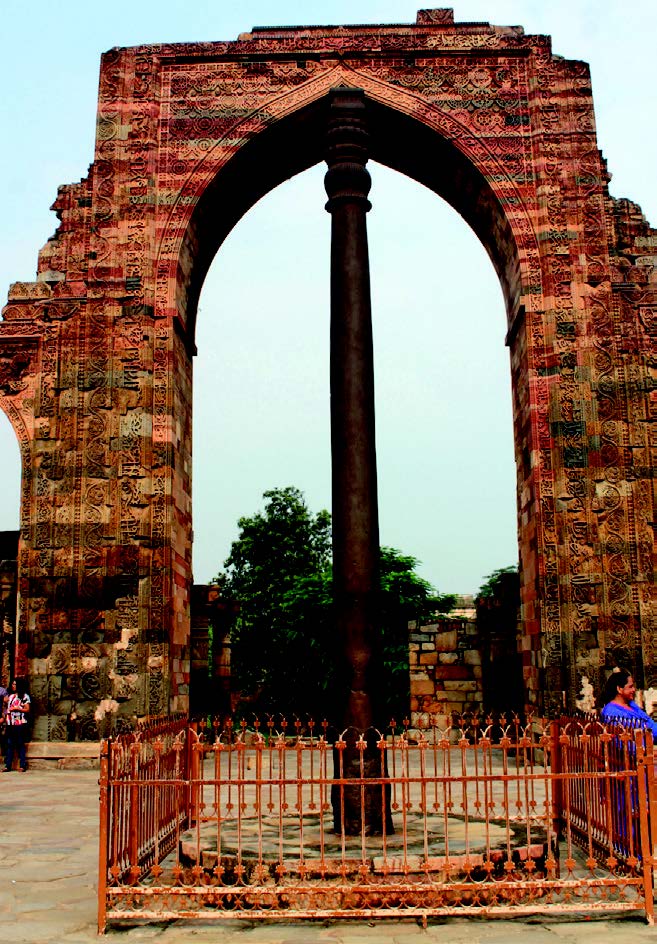 Who, among the Turks, brought the structure to its current location? Until the time when historian Finnbarr Barry Flood put forth his thesis, the assumption among most scholars was that it was Qutbuddin Aibek (reign 1206-10), the slave and commander-in-chief of Turkish ruler Muhammad Ghuri, who after conquering Delhi from the Chauhan Rajputs towards the end of the 12th century, installed the pillar as a ‘trophy of conquest’ in the city’s first jami masjid – as a sign of Muslim victory over a conquered Hindu population.

Flood clarifies that there are problems with this kind of a popular assumption. He draws our attention to a mid-14th century text Tarikh-i Firuz Shahi, written by Shams-i Siraj Afif, according to which it was Aibek’s successor Iltutmish (reign 1210-36) who re-erected the iron pillar to perpetuate the memory of his own rule. It was re-erected probably in the late 1220s/early 1230s, around the time the new ruler was extending the area of the congregational mosque.

Flood argues that lltutmish’s re-installation of the pillar in the jami masjid did not amount to installing a ‘trophy of conquest’. On the contrary, it marked a cultural continuity of an existing royal practice, as also a symbolic attempt to connect with the pre­-Muslim kingship. Kings in ancient and medieval north India, he explains, not only erected commemorative pillars but also re-installed, appropriated, re-used or re-inscribed those erected by their royal predecessors.

Historian Catherine Asher also says that the reappropriation and reuse of the Allahabad Pillar was a part of a deep-rooted Indian tradition. Currently housed within the Allahabad Fort, the pillar was first inscribed by the Mauryan emperor Ashoka who ruled during the  third century BCE.

In the fourth century CE, Samudragupta of the Gupta dynasty inscribed a list of his achievements and those of his predecessors on the structure. In the 17th century, the pillar was inscribed again by Mughal emperor Jahangir.

The iron pillar that now stands in Mehrauli, as discussed, had been taken from its original location and re-installed within a temple complex in Lal Kot, built by the Tomar king Anangapala. It was reinscribed at that time as well.

According to Flood, Iltutmish’s installation of the iron pillar could have motivated the Delhi sultan Firuz Shah Tughlaq (reign 1351-88) to relocate and reuse several Ashokan stone pillars. The Delhi-Meerut pillar was brought from Meerut and was re-erected near the sultan’s hunting palace, kushk-i shikar, on the northern Ridge.

The Delhi-Topra pillar was brought from Ambala and re-erected on a three-storeyed structure in the sultan’s fortress, Firuz Shah Kotla. Both pillars contain edicts of Ashoka.

Like Mehrauli’s iron pillar, the Delhi-Topra and Delhi-Meerut pillars also traversed complex journeys, across time and space, to become an integral part of Delhi’s cultural landscape. And today, they narrate a fascinating story of Delhi’s past – multi-layered, multicultural and pluralistic.