Past Continuous: How Jayaprakash Narayan Helped the RSS Overcome Its Stigmatic Past 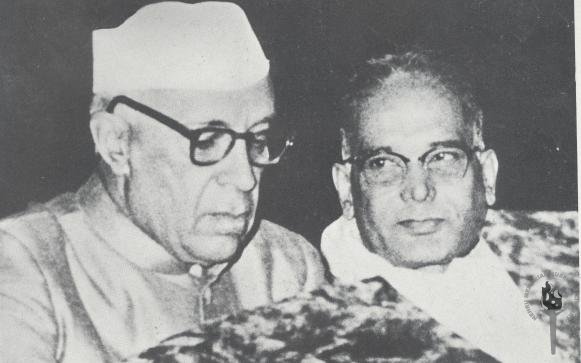 One man, considered a demigod by the majority of present-day political leaders, particularly from the ruling establishment, declared 40 years ago, in the course of the watershed elections of 1977, that selecting a prime ministerial candidate before the elections was “not a democratic way of doing things”.

Three months before the assertion, Jayprakash Narayan man was referred to as ‘grandfather’ by the mild-mannered Madhu Dandavate in a cryptic cable sent to L.K. Advani. This was when coded conversations were necessary to escape the scrutiny of censors because India remained under Emergency rule and a good number of opposition stalwarts, including Advani, were still locked up in jails.

Narayan was treated as the patriarch of the Janata Parivar, even though he was six years younger that Morarji Desai, the country’s first non-Congress prime minister. Narayan was also the same age as Charan Singh and six years older than the other claimant in the bitter struggle for the prime ministerial position, Jagjivan Ram. Narayan remains revered as the grand old man of the Janata Party because he took himself out of the race for positions and became its conscience keeper. There is another reason why today’s governing leaders must hold the Janata Parivar in high regard: they owe the party’s inclusion in the mainstream to him.

Narayan, however, was a man of limited vision: despite opposing the pre-selection of a prime ministerial candidate, as is the norm now, he was among the primary catalysts for the merger of non-communist opposition parties without resolving basic ideological divergences.

The Janata Parivar promoted unification between the Congress (O), socialists, Jana Sangh, Lok Dal and the Congress for Democracy because, as he said, the “two party system is the best”. This was almost 15 years before the decision to implement the Mandal Commission empowered marginalised communities with the emergence of several identity-based parties.

Narayan also provided impetus to the idea of ‘one-nation, one poll’ when he advanced the plan to dissolve existing state governments when the Janata government assumed office. Narayan argued that states must be “in tune” with the Centre and that when a new government is formed at the Centre, state governments must resign and fresh polls be held. For all his righteousness and commitment to democratic values, Narayan was inadequate on several matters.

For instance, he declared after Lok Sangharsh Samiti’s formation that Nanaji Deshmukh was to be handed its leadership in the event of his arrest. It didn’t cross his mind that Deshmukh’s appointment would provide undue advantage to the Rashtriya Swayamsevak Sangh (RSS) in leveraging the agitation. So deep was Narayan’s anti-Congressism that he gave little thought to the long-term consequences of his partnerships.

The imposition of the Emergency, the ruthless suppression of individual rights, subversion of institutions, Indira Gandhi’s defeat in 1977, formation of the Janata Party government and its subsequent demise, were a series of inter-connected episodes that combined to proclaim India’s first political transition. Forty years later, there is a rare conversation on the political past, when a reference to these chapters is not made. ‘The Emergency’ stands for much more than a presidential promulgation.

While events in 1977 can almost ceaselessly be examined from myriad perspectives, two particularly stand out: firstly, that no political party or leader is infallible and secondly, the events initiated the process of ending decades of political isolation of the Sangh parivar. By including the Jana Sangh in an umbrella anti-Congress party without its members forsaking the ideology of the RSS, the process of its mainstreaming began. Among other reasons, the Janata Party’s split two-and-half-years later was over ‘dual-membership’, underscoring that compromise was made with the sole idea of defeating the Congress.

When Jana Sangh forged political partnership with non-Congress parties to form the Janata Party, secured the highest percentage (31%) of party tickets in the 1977 Lok Sabha polls and Atal Bihari Vajpayee was appointed foreign minister in the Desai government, its leaders completed a project started 15 years before. Begun under Deendayal Upadhyay’s stewardship after the 1962 election, this entailed striking alliances with mainstream and legitimate opposition parties. Previously, Jana Sangh formed alliances with Hindu parties.

The first success was in 1964 when Upadhyaya and maverick socialist leader Ram Manohar Lohia issued a joint statement after the disappearance of the holy relic from the Hazratbal shrine. The non-conditional merger of the Jana Sangh into Janata Party meant its acceptance in the electoral mainstream without debate on its position on secularism and the Sangh’s understanding of Indian nationalism.

A key role in paving the Jana Sangh’s way into Janata Party was played by Narayan. He needed RSS support for the agitation along with backing from other opposition parties. By the time Emergency was imposed, the formation of Janata Party was almost a fait accompli. In the winter of 1974, Babulal Gaur and Sharad Yadav won the by-elections for an assembly seat and a Lok Sabha constituency respectively as ‘Janata’ candidates.

Reservations of just a few had to be ironed out and this was done during time spent together in various jails. Opinions of those like Madhu Limaye and Surendra Mohan on one side and K.R. Malkani on the other, were electorally insignificant and thereby silenced. Malkani changed his stance later but the other two stuck to their guns and eventually felled the Desai government.

By the time Indira called for polls in 1977, the Jana Sangh had overcome it stigmatic past. The RSS and its affiliates, including the Jana Sangh, faced barbs for decades over early Hindu nationalists being influenced by European fascists and on alleged links in the Gandhi murder case. But because the Jana Sangh and the RSS cadre was essential to sustain and advance the total revolution stir, its ideological baggage was overlooked.

Narayan provided the ultimate stamp of approval by signing up for a mutual admiration society with Balasaheb Deoras. In a reciprocatory gesture after the RSS chief declared that Narayan was on the path of Mahatma Gandhi, Acharya Vinoba Bhave and Golwalkar and was a sanyasi, he attended a Jana Sangh meeting and declared to thunderous claps “if you are fascist, then I too am a fascist.” Had Emergency not been declared, the Sangh parivar may have remained the political pariah it initially was.

In the race to provide greater political legitimacy to the Sangh parivar, the baton was again picked up during the 1989 elections that unseated Rajiv Gandhi. By then, the Jana Sangh had morphed into the BJP and had chosen to retain its individual identity while non-Congress and non-Left parties eventually coalesced into the Janata Dal. The push for BJP’s final mainstreaming came from the Left too, as the Janata Dal made seat adjustments on one side with BJP, and with the communists on the other.