Why the Partition Is Not an Event of the Past

Amid the slow and accumulating distortions in school textbooks, monuments and mainstream media, we need a renewed scrutiny of the majoritarian nationalism that was behind the 1947 catastrophe. 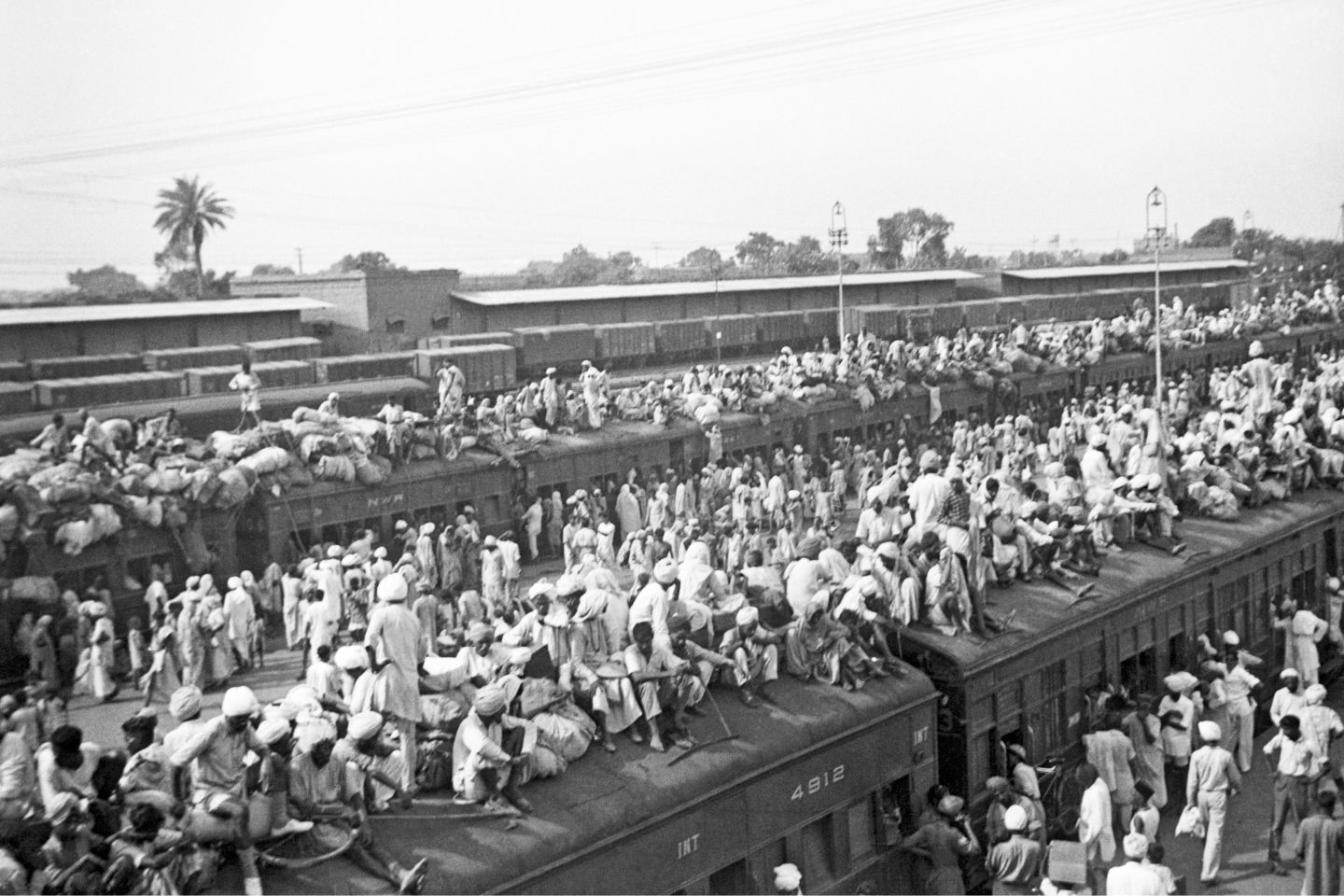 Partition violence was genocidal not just in scale, but also because of its intent. Credit: Wikimedia Commons

If the twentieth century was an “age of extremes,” as Eric Hobsbawm described it, then where do we place the promise of decolonisation on the one hand and terror of Partition on the other?

“I did not want India to be partitioned, and it has been partitioned,” Mahatma Gandhi lamented at one of his multi-faith prayer meetings as Partition violence spread from Punjab to Delhi in September 1947. For a man who had dedicated his life to the anti-colonial struggle, Partition was an unbearable price for independence, the undoing of the centuries that Muslims and Hindus had lived together and a compromise of his concept of true swaraj, or self-rule, which he had once argued was impossible “without communal unity.”

Despite his anguish and his age, Gandhi was tenacious. He walked, prayed and fasted, drawing upon his well-worn strategies of non-violence once used to humble an arrogant and racist empire, to now abate and salve the terror and violence from within. But the violence of Partition was not just another Hindu-Muslim riot, and its scale was unprecedented in the subcontinent’s modern history.

In divided Punjab, the British government at the time timidly put the numbers at around 200,000 deaths, but others who bore witness to the killings placed the figure closer to two million. Over the years, it became standard practice to say a million died in “Partition violence,” to capture in some way the enormity of what had happened.

Two studies have been led by Harvard University faculty to give greater numerical precision to the human toll by using local, district-level data. Prashant Bharadwaj, Asim Khwaja and Atif Mian calculate that 3.7 million people went “missing” during the violence and most of them could be counted as those who died. Jennifer Leaning and colleagues estimate 2.3-3.2 million deaths in Punjab alone.

These numbers are just one kind of accounting, but it is important for they demand of us an account that can measure up to the scale of what happened, not just in the subcontinent’s history but also in the larger 20th century that shaped it. However, as W. G. Sebald wrote about looking back at Germany’s fascist past – that “we are always looking and looking away at the same time” – this has not been an easy task.

Over the last two decades, a great deal of research and writing has been simply breaking the silences around Partition, by collecting oral histories from a passing generation that lived through it, and by scavenging for documents in official and family records. And while there is now a deluge of attention on Partition’s memories, a willingness to speak of its traumas comes with a looking away when it comes to questioning the division itself, as if the violence and the political ideas that engendered the violence are entirely separable.

The question is not simply whether Partition should or should not have happened. But without a historical sense of the powerful ideas of nationhood that underpinned it, we cannot recognise what is at stake for the here and now – and the stakes have never been higher, and not just for South Asia but for nationalism around the world.

When the British conquered India, they understood and governed the country as divided by its many religious communities, with Hindus and Muslims forming the two largest ones. Thus when the struggle against imperialism began to be mobilised at the beginning of the 20th century, the unity of the different religious communities was seen by nationalists as essential to the anti-colonial struggle, and it is here that the idea of a nation as a fundamentally plural political community was forged. Even before Gandhi returned from South Africa, it was Muhammad Ali Jinnah – now regarded as the founding father of Pakistan – who took leadership in the nationalist struggle as the champion of Hindu-Muslim unity. Gandhi too sought out and built intimate ties with Muslim leaders, and communal unity became integral to swaraj, to a nation striving for freedom.

To understand the extraordinary nature of this particular Indian ideal of inclusive and plural nationhood, it is important to turn to Europe in the same period. As the ravaging Great War drew to a close, US President Woodrow Wilson’s Fourteen Points for peace became a clarion call for those seeking national self-determination around the world. It became a driving force at the League of Nations as new nation states were carved out of the former polyglot, multi-religious and multi-ethnic empires on Europe’s eastern borderlands.

But existing nation states, such as those of Western Europe, had hitherto been imagined only in mono-ethnic, monolingual or mono-religious terms and presumed the homogeneity of peoples it claimed to represent. It was an exclusive understanding of nationalism, and when it was imposed in this “belt of mixed populations” it unleashed the dark side of nationalism – the homogenising, assimilating and even annihilating impulses of majoritarian nationalism in the face of heterogeneity in society at large. Can you imagine large Armenian populations in Turkey today, or Jews as integral to the Hungary of today, or historic Muslim and Christian communities of Greece still living together?

The League of Nations did try to grapple with this dark side of nationalism and its experiments were followed closely in India. For one, the League imposed minority treaties on the new multi-ethnic Eastern European states and created national minorities whose differences were not to be expunged but rather protected by the Paris Treaties. During the interwar years, Jinnah spoke often of Czechoslovakia in particular as it was the most similar to India’s Muslim demographics, with an ethnic German minority that formed a substantial one-third of the population, with concentrations in the Sudeten borderlands.

The abject failure of the minority treaties in actually addressing minority grievances and the rise of fascism and Hitler’s annexation of Sudetenland in 1938 certainly gave the Indian ideal of an inclusive and plural nationalism a grave jolt from the outside. It transformed minorities into a threat, marked the international failure of minority rights to maintain plural polities, and this failure formed the backdrop to Jinnah’s Pakistan resolution in 1940 that set the stage for Partition with the proposition that the diversity of India’s Muslims was no longer to be regarded as a minority but rather a separate nation in need of a separate nation state.

However, it is important to remember that even as minority rights were feared to be inadequate, there could be no illusions that to create any kind of homogenous nation state in a historically multi-religious society could only be a very violent process. While forced expulsions of unwanted people was not a new phenomenon, the League of Nations made it legal with two “transfer of populations” agreements between Bulgaria, Greece and Turkey, under the treaties of Neuilly and Lausanne in 1919 and 1923. The Greek-Turkish exchange of people along religious lines forced approximately two million people out of their homes. Even though it was an internationally sanctioned, legalised and planned form of ethnic cleansing, few reports of the time, including Zionist studies of the legal “transfers” for envisioning a Jewish state without Palestinians, could evade the enormity of the suffering it had caused. In keeping with ideas of the time, the 1940 Pakistan resolution only tentatively asked for a consideration of “transfer of populations,” and instead demanded minority safeguards for substantial religious minorities that it imagined would remain a part of both Pakistan and India.

When compared to other twentieth-century partition plans in the British empire, namely those of Ireland and Palestine, it could be argued that these plans were meant to simply bestow majoritarian national status to renegade minorities, and were not invitations to ethnic cleansing in of themselves. The Indian case was quite unique because here, an anti-colonial experiment in plural nationalism had been undertaken which had attempted to solder both Hindus and Muslims as integral to the idea of India. And for all those who had believed and invested in that experiment, Partition on a religious basis undermined the very ethos of pluralism and threatened to make Muslims outsiders/aliens to the very idea of India.

As such, the years and days from 1940 to 1947 were full of historic angst, debate and detours, and even Jinnah momentarily relinquished the Partition as late as 1946 for a plan for united India. However, at the same time, the idea of Partition unleashed far more extreme ideas than even those of the Pakistan resolution itself. Hindu groups successfully lobbied the Indian National Congress to divide the provinces of Punjab and Bengal district by district (despite Jinnah and Gandhi’s ire at this proposal). Others called for the total “transfer of populations” along religious lines to create “pure” Muslim and Hindu states, and although this was vehemently opposed by most leaders, a “transfer of populations” agreement was adopted by the two new nation states for divided Punjab when Partition violence had already forced people on the move.

Partition violence was genocidal not just in scale, but also because of its intent. This was a gruesome district by district “weeding out” of unwanted religious communities, unraveling centuries of living together. The way in which the enormity of this violence has come to be narrated in literature and in people’s memories is often through the theme of madness, as a collective loss of reason: the whole country had gone mad. The metaphor of “weeding out” is important for it comes from the work of the philosopher and sociologist Zygmunt Bauman. He had argued in the 1980s that the Holocaust should not be considered an aberration of modern history, but rather that it stemmed from as ordinary an impulse as weeding the garden. Visions of ethnic purity turned groups in society into human weeds to be systematically regarded as dangerous, contagious, to be separated, and if necessary, ultimately killed. Mass murder was not the result of a collective loss of reason or uncontrolled passion; it instead drew upon a set of ideas, vision and planning that re-organised society in both mundane and catastrophic ways.

In that sense, Partition is not behind us. It is not an event of the past. It is rather like the Zahir in Jorge Luis Borges’ story, an object that slowly distorts all reality in relation to it. These slow and accumulating distortions, in school textbooks, monuments, mainstream media and so on, have had a mundane effect of transforming public common sense into narrowing nationalisms. And it is only when these narrowing nationalisms become catastrophes, with the killing of marked minorities, that there is episodic outrage. But we need more than episodic outrage.

Seventy years on, most people in both India and Pakistan have retired to the view that while the violence of Partition was regrettable – and could have been avoided if the British had handled their exit with less shameless haste and self-interest – Partition itself was a good thing. It is no longer a subject of debate as it was in its immediate aftermath. And yet this is precisely the moment when we need renewed scrutiny of the kind of nationalism that Partition conceded, and whether it is indeed the “evil” that the poet Rabindranath Tagore once lectured against – a devastating surrender of humanity’s capacity for humanity.

Vazira Fazila-Yacoobali Zamindar is associate professor of history at Brown University and author of  The Long Partition and the Making of Modern South Asia: Refugees, Boundaries, Histories (2007).