While the parijata is a mythical plant, capable of shifting shape and granting wishes, the stories accompanying its real life forms are just as interesting. 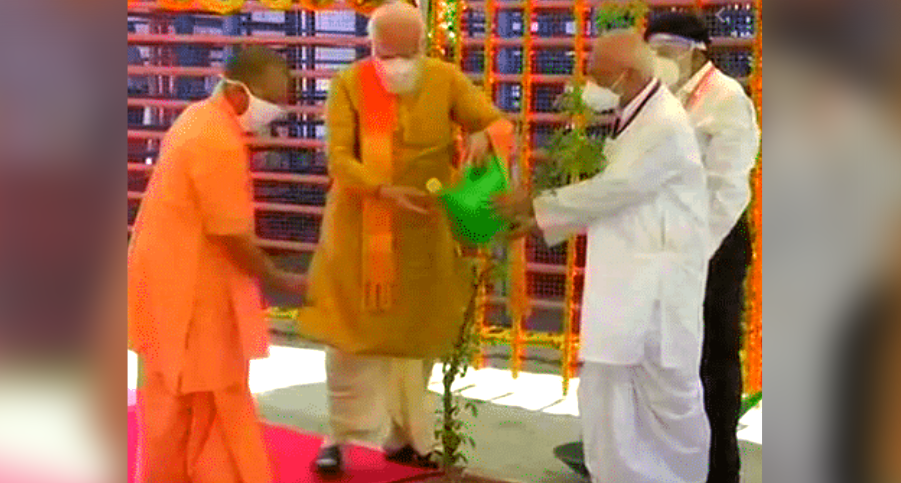 Days after Prime Minister Narendra Modi planted a sapling of parijata on the premises of the Ayodhya Ram temple on August 5, news reports emerged of a spike in sale of parijata saplings across Delhi NCR, following extensive media coverage of the planting ceremony.

Initially, media images of the plant failed to resolve its identity. Something wasn’t adding up. Parijata is also known as ‘Harsringar’ (Nyctanthes arbor-tristis). However, the sapling that Modi planted was not of Harsringar. Its divided leaves (five-to-seven leaflets arranged like the digits of a finger) were a dead giveaway, and looked suspiciously like that of a baobab sapling. Harsringar has undivided leaves.

According to botanists, the best way to confirm was through first-hand examination, and a recent visit to Ayodhya settled the issue. The newly planted sapling was supplied by the state forest department, and completely enveloped within a tree guard “to keep it safe from the monkeys”, said one of the security guards. The newly-planted sapling was undoubtedly a baobab.

The importance of parijata in Hindu mythology

Considered a divine tree, parijata is known to have much significance in Hindu mythology. The puranas (chiefly Vishnu Purana, Harivamsa and Bhagavata) have several interesting but contradictory narratives associated with it.

Parijata emerges during the churning of the ocean (samudra manthan). Indra plants it in his celestial garden. During a visit, Krishna and his consort Satyabhama see it there. Unable to talk Satyabhama out of her desire to possess it, Krishna uproots it and is on his way when Indra rushes out to defend his prized possession. He is vanquished in the battle; the parijata reached Dwaraka and after Krishna’s death, ascends back to heaven.

Another time, sage Narada presents Krishna a parijata flower and he, in turn, offers it to Rukmini. Furious that she was overlooked, Satyabhama resolves to acquire the tree and wastes no time in coercing Krishna to get it for her from Indra’s garden. Following a battle with Indra, the tree arrives. By that time, Rukmini also desires it. Faced with a painful stand-off, Krishna finds a clever solution by planting it in such a way that its trunk is rooted in Satyabhama’s domain, but flowers are showered in Rukmini’s garden.

In another story, Shiva creates a parijata forest in the valley of the Mandaara mountain to please his companion, Uma. Sun rays, moonbeams or the breeze do not reach there – the forest is self-luminous through Shiva’s powers. Suffused with his energy and free from external adverse influences, these trees are superior to Indra’s parijata. Capable of assuming human shape, they worship the lord during his visits. Other than Shiva, Uma and their entourage, only Narada is allowed here. Andhaka, a mighty asura who tries to enter the forest by force, is slain by the lord.

Once, sage Kashyapa is very pleased with his wife Aditi’s devotion and grants her a boon. Seeing that she has an impractically long wish list, Kashyapa invents a parijata that has the power to fulfil any wish. As the sage creates it across the river from his hermitage, it is gets its name parijata, meaning ‘born on the opposite shore’.

The final story is related to a princess called Parijataka, who falls madly in love with Surya, the sun god. After a brief dalliance, however, he loses interest in her. Unable to bear the grief, she jumps into a fire and dies. From her ashes rise a parijata tree – whose sweet-scented flowers bloom only by night, falling off before sunrise. They are unwilling and unable to behold the sun. This is why it is known as the ‘tree of sorrow’.

The Amarakosha describes parijata as one among the five kalpavrikshas, capable of granting food, beverage, fine clothes, gems, ornaments, or wonderful music, it can dispel hunger or unhappiness, and even alter its shape and size. (Jain texts recognise it as one of ten kalpavrikshas). Indra’s parijata, for instance, is large enough to encompass Dwaraka or become thumb-sized. It has golden bark, coppery-red, young leaves and fragrant flowers that never wilt.

Most published references regard Harsringar as the true parijata. Known by different names – night jasmine, tree of sorrow, sheoli and shefali, it is a small native tree of the sub-Himalayan tract and central India, but cultivated all over India. The creamy-white flowers widely used in worship, possess a sweet fragrance that permeates the air as they open in the evening and fall off early next morning. 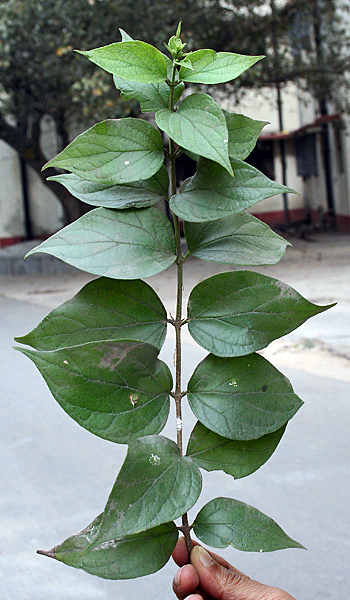 The petals are attached as in a pinwheel to a brilliant orange tube. Its two-seeded fruits are round and flat, turning brown and brittle as they mature. Leaves occur in pairs at each node of the quadrangular stem. Endowed with rough undersides, they are used in fine-polishing of wood and ivory and, according to the Sushruta Samhita, even for scrubbing skin for para-surgical procedures.

To be sure, other plants, for instance, the Indian coral tree (Erythrina variegata) and the fiddlewood (Citharexylum spinosum) have been suggested as parijata but are not serious contenders. Even the baobab (Adansonia digitata) has been so proposed and is locally venerated as kalpavriksha or parijata at places. One example is a tree in Kintoor near Lucknow. For the local people it is one of its kind, having been brought from Indra’s garden by Arjuna 5,000 years ago for his mother Kunti, who wished to worship Shiva with its flowers.

Recent radiocarbon dating has shown its age to be approximately 800 years. In Sultanpur, near Prayagraj (formerly Allahabad), a different variety of baobab is venerated as parijata. Similar examples of local worship are scattered across Gujarat, Rajasthan and other states. However, in the light of later discussion, these examples are exceptions and not the rule.

Known as Gorakh imli, baobab is an acknowledged African migrant having disjunct geographical presence in India, mainly along western- and south-eastern coasts, with isolated pockets in the Indo-Gangetic plain, Central India and Deccan Plateau. In its native Africa, the charismatic baobab is highly venerated for its enormous size and longevity as a symbol and abode of ancestors and magical spirits, and greatly valued for food, medicinal and artisanal uses.

It also serves as a source of rainwater store, shelter and sacred site. Its large night-blooming odoriferous white flowers are suspended upside down on a long stalk. The gourd-like fruits, filled tiny black seeds embedded in edible, spongy vitamin C-rich pulp, are easily carried over long distances to be consumed as food. In India, however, the tree has hardly any use. 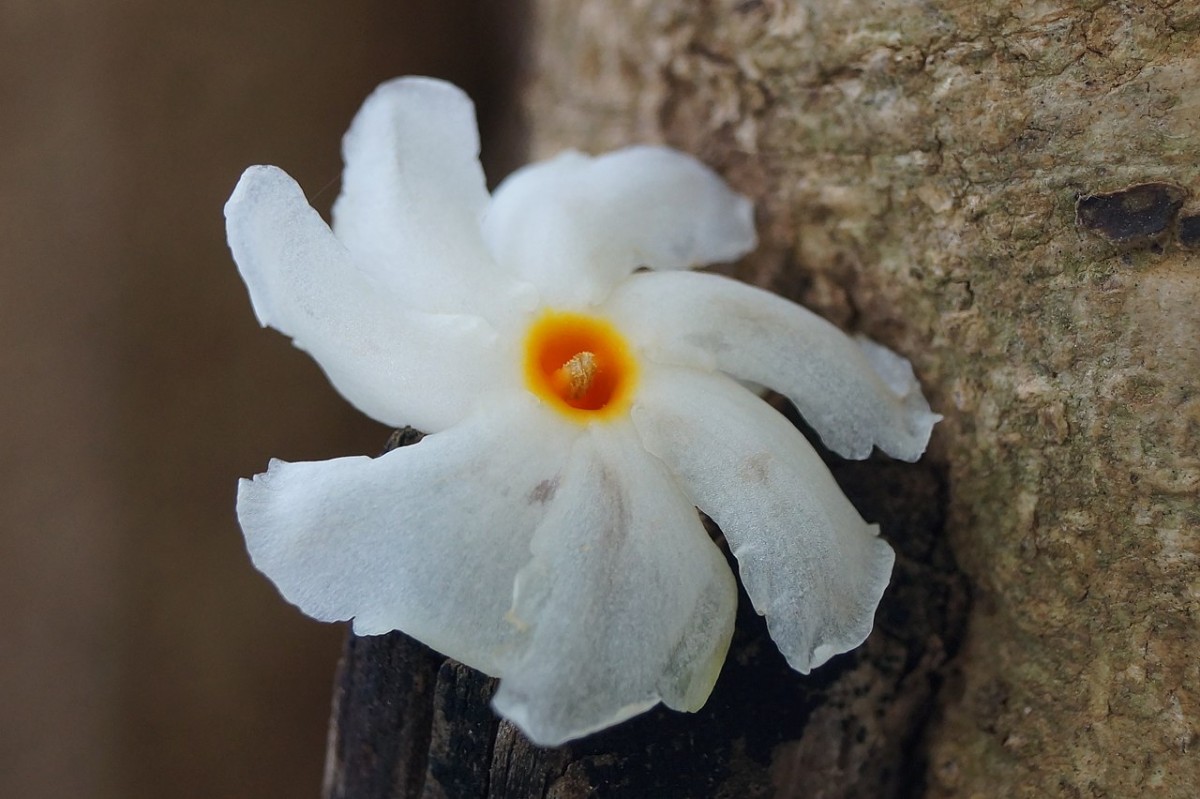 Baobabs and the African diaspora in India

While writing about baobab’s African origin, most published sources have attributed its introduction to unknown ‘Arab traders’ with no clue about their motives for introducing a tree with no commercial value in India. On the other hand, India and Africa have had direct historical links across the Indian Ocean through which movement of people, products and ideas occurred continuously. Recent research by professor Haripriya Rangan and her associates in Australia focussed on genetic studies of baobabs combined with analysis of trade, exchange and cultural practices between Africa and the Indian Ocean world. In short, it shows that baobabs of India derive ancestry from different regions of Africa, and their movement across the Indian Ocean has occurred repeatedly during four broad historical periods:

(a) prior to tenth century CE – when food crops such as sorghum, pearl millet, finger millet and cowpea arrived from Africa;

(c) sixteenth to seventeenth centuries CE – when the Portuguese gained control over African ports and established trade monopoly; and

(d) eighteenth to the middle of twentieth century CE – when trade and migrations were under the combined influence of Dutch, French and English colonisers.

Seafarers from different parts of Africa carried some baobab pods to supplement other food supplies over many long journeys. The genetic structure of the baobabs confirms these geographical connections, reflecting the histories of numerous African people who arrived, intermingled and spread out in India as sailors, soldiers, servants, slaves, proselytisers and merchants. Adopting the locally dominant religion, they became Muslims, Hindus or Christians, and came to be collectively known as Habshis or Sidis.

Today many parts of western India have small Sidi shrines at the base of baobab trees, similar to the ancestor shrines built by families in rural northern Mozambique. Several venerate the Muslim Sidi saint Bava Ghor, his sister Mai Misra, and brother Baba Habash, while others are devoted to Khudiyar, a folk water goddess – much like the Mamiwata (mother water) spirits celebrated in parts of west and central Africa.

At some sites Hindu and Muslim believers perform healing rituals, similar to the rituals associated with the baobab tree in Africa. In other places, baobabs are personified as rukhda dada or ‘grandfather tree’ with small shrines similar to those found in northern Mozambique. In the small town of Savanur in Karnataka, where there are three huge baobabs, the local folk believe that Lord Krishna brought the seeds from Africa and planted them there.

As fascinating as our puranic stories are, they do not offer critical diagnostic evidence for authentic scientific identification, leaving room for subjective interpretations. In most parts of India, Harsringar is conventionally regarded as parijata. Being a native species, it was probably familiar to ancient Indians and matches at least some of parijata’s traits.

The African baobab, on the other hand, has far less claim in this regard. African Indian communities may not have a presence in all the landscapes where baobabs grow today as land use patterns have drastically altered over the years, but undoubtedly their presence is entwined with Sidi history and culture.

In the end, it all comes down to what you wish to believe: if the temple authorities at Ayodhya believe that the baobab is the parijata, so be it. The rest of us can continue to believe it is actually Harsringar.

S. Natesh is a botanist and has taught at the Delhi University before moving to the department of biotechnology, GoI, where he headed several divisions. Currently he works at the DST Centre for Policy Research at IIT Delhi. His book on the iconic trees of India is slated for publication in 2021 with Roli Books.