Gandhi's Gift to India, the Land of Eternal Paradoxes

While fear stalks the country today in a thousand forms of violence, out of Gandhi's complex legacy, we may draw several salutary lessons of great contemporary relevance. 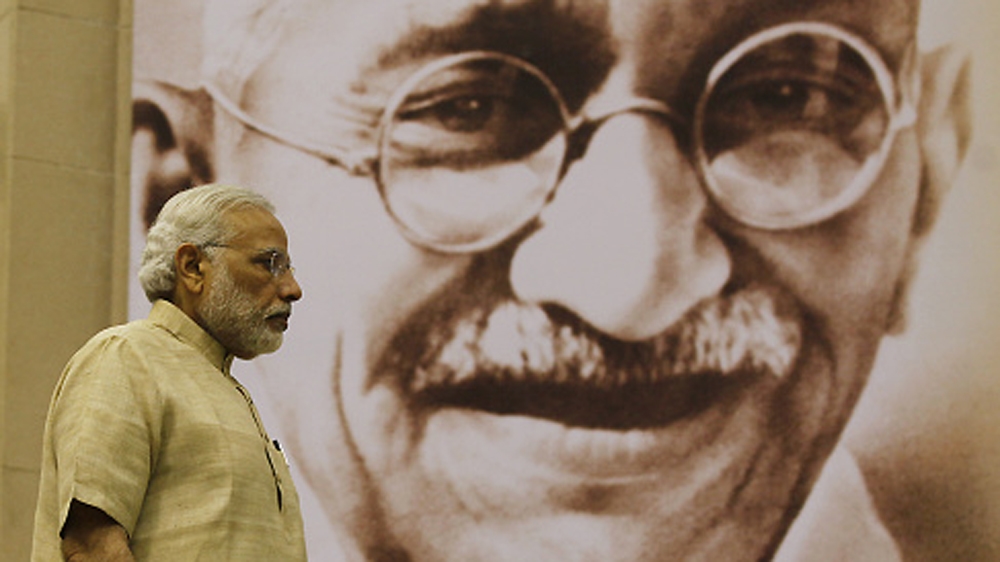 The absorption of Mahatma Gandhi into India’s statehood was an unfortunate development after our struggle for independence. Since then, he has been deployed by all political dispensations towards, shall we say, ‘unGandhian’ ends.

This fact is brought out in particularly sharp relief under India’s rulers today who are the political descendants of the enemies of Gandhi and his values. It is no secret that they believe in the same toxic ideology upheld by the Mahatma’s assassin. But, as if to justify the cliche of India as the land of eternal paradoxes, the Government of India celebrated September 29 as ‘Surgical Strike Day‘ and will in the same breath heap encomiums on an apostle of peace on October 2.

This Gandhi Jayanti especially marks the beginning of a year of celebrations to commemorate the 150th birth anniversary of the Mahatma. As it turns out, 2019 is also the centenary year of a number of key events – the massacre at Jallianwala Bagh being the foremost – that marked the final emergence of Gandhi as the pre-eminent leader of India’s struggle for freedom. All of these historical facts provide numerous opportunities to examine and revisit these watershed moments of modern Indian history. But there are also broader lessons of contemporary relevance to be drawn from Gandhi’s life.

Also read: ‘Hindus, in Trying to Drive out the Muslims, Are Not Following Hinduism’

While the corrosion of India’s secular and democratic values has happened over the past many decades, in recent years there has been a more severe degradation that poses numerous threats to the very fabric of modern Indian republicanism. In this context, it is useful to recognise that, notwithstanding his anointment as the ‘Father of the Nation’, Gandhi is a man for all ages and belongs to all peoples. Indeed, despite the best of efforts, Gandhi and the message of his life can hardly be contained and tamed within the confines of the pious platitudes of the state.

Out of Gandhi’s complex legacy, we may draw some salutary lessons of great contemporary relevance. Here, I am reminded of the assessments of the Mahatma by two of his compatriots. Men of independent stature, Jawaharlal Nehru and Rabindranath Tagore, were admirers of the Mahatma who did not flinch from criticising him when they felt it was warranted.

In his celebrated The Discovery of India, Jawaharlal Nehru provided this assessment of the Mahatma :

And then Gandhi came. He was like a powerful current of fresh air

that made us stretch ourselves and take deep breaths; like a beam of

light that pierced the darkness and removed the scales from our eyes;

like a whirlwind that upset many things, but most of all the working

The essence of his teaching was fearlessness and truth, and action allied to

these, always keeping the welfare of the masses in view. The greatest

gift tor an individual or a nation, so we had been told in our ancient

books, was abhaya (fearlessness), not merely bodily courage but the

absence of fear from the mind. Janaka and Yajnavalka had said, at the

dawn of our history, that it was the function of the leaders of a people

to make them fearless. But the dominant impulse in India under British

rule was that of fear – pervasive, oppressing, strangling fear;

It was against this  all-pervading fear that Gandhi’s quiet and determined voice was raised;

So, suddenly, as it were, that black pall of fear was lifted from the

people’s shoulders, not wholly of course, but to an amazing degree.

As fear is close companion to falsehood, so truth follows fearlessness.

Today’s India bears a rather disconcerting resemblance to the atmosphere that Nehru so eloquently described. The wanton assault and lynching of Muslims in the name of gau raksha, the perpetuation of a false narrative of victimhood of the majority, the arrest of a number of human rights activists, and numerous other assaults on reason and human values has created a climate of intimidation and fear.

As Nehru pointed out, the idea of abhaya is an old Indian ideal. In cultural terms, it is embodied in the serenely beautiful abhayamudra representation of the Buddha. In modern times, Gandhi has taught us that it is both possible and necessary that ordinary people fortify their minds and learn to deal with the fear of speaking out.

On a different note, while he was critical of Gandhi on many counts, in a celebrated 1921 tour d’horizon essay titled ‘The Call of Truth’, Tagore had argued that:

Nothing resembling self-sacrifice or true feeling for their [own] countrymen was visible. At this juncture, Mahatma Gandhi came and stood at the cottage door of the destitute millions, clad as one of themselves, and talking to them in their own language. Here was the truth at last, not a mere quotation out of a book. So the name of Mahatma, which was given to him, is his true name.

While fear stalks the country today in a thousand forms of violence, agrarian India is gripped by a deep and enduring social and economic crisis. If we are to owe allegiance to the values that Gandhi represented, India needs to render justice to its farmers, artisans, manual scavengers and millions of other workers who live by the sweat of their brow.

In summary, one may view Gandhi’s life as a search for justice in its various forms. His struggles for Hindu-Muslim amity were one aspect of a search for social justice. His championing of khadi and village industries were a reflection of a life-long quest for economic justice for all Indians. And most crucially, Gandhi’s proposal of a new pedagogy in the form of Nai Talim was a radical demand for cognitive and epistemic justice to the understanding and knowledge systems of India’s toiling masses.

In the face of the numerous crises that stalk the land, India need not and should not look for a messianic figure for its deliverance. Instead it should work hard to strengthen and shore up its democratic edifice. In this collective quest of us ordinary Indians, Gandhi’s life has much to offer.