Love in the Time of Partition

Partition produced many stories; of loss, horror and deprivation, but also of love and longing. When Partition was announced, many families like mine from villages like Lyallpur, Miani, Jhang and others, deep inside undivided Punjab, decided to take whatever possessions they could carry – usually one small bagful – and flee. They handed the keys to what had always been their home to their trusted Muslim neighbours and left. Young women were, of course, particularly afraid; stories of what could happen were multiplying. But stories of love and longing also emerged.

Ma was 21 at that time. She told me that all the Punjabis quickly left at dawn, including her friend Sukrita’s large joint family of uncles, aunts, grandparents and seven siblings. As they travelled some distance, they noticed that Sukrita was missing. Panic struck. Where was she? What should they do? In a panicked family confabulation, they realised that no one had seen her since they locked the doors to their haveli. If they went back to look for her now, they felt, it would put the entire family at risk. They had to move on.

One young boy from another village heard this story a few hours later. He was escorting his family; his elder brothers and sisters were with him. He kept thinking of this ‘Sukrita from Lyallpur’, alone now in a deserted village.

Where was Sukrita? That night, she had decided to sleep alone on the terrace, even as fear drove everyone else to sleep inside the house. When she awoke, she found herself locked in, alone inside a deserted house. Everyone had left. In the panic, no one had checked about her. She ate her breakfast and sat down to plan her strategy. She would stay quiet in the house until night and then search the village for help. Suddenly she heard someone trying to break in. The panic-stricken girl hid under a bed, holding her breath. The knocking on the window intensified. She closed her eyes. There was a creaking sound. A latch had been broken and someone was climbing into the house.

Someone called out her name. The terrified girl did not react; she lay still. She held the kitchen knife near her heart. Again, her name was called out and then a head appeared, stooping to see her. “I am Paul,” it said. “I’ve come to take you to your family. They are travelling to the new border.”

That’s how Sukrita met Paul. Some years later, Paul topped the Delhi School of Economics. His first job was in the newly created Planning Commission. That’s when they got married.

Also read: Bollywood Songs Continue to Bring Back Memories of Partition and Communalism

Santosh Sethi was 21, displaced in the sprawling Kingsway Camp in Delhi. Her brother was still amongst the missing. She and her mother would listen to the radio announcements of missing persons who had been found every evening. Life in camps is tough. You need empathy to understand that. Santosh had done her B.A. in Lyallpur. Now she needed to do something to look after her family. 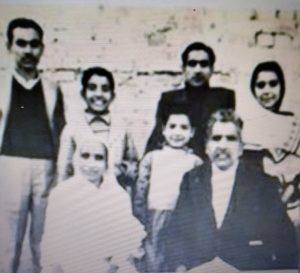 One young man, Sikander Malik, similarly displaced, had joined Delhi School of Social Work and had been tasked by his professor – one Frank Thakur Das – to carry out a survey in the camp. There he met this frightened young refugee woman, looking for her brother, tending to her ill father, blank in her eyes from desperation. He asked her if she wanted to attend his college. She had lost all her certificates, but Professor Frank Thakur Das came to the rescue. He got her provisional admission into a course for a master’s in social work – which remained provisional for two years while she completed her master’s and got her degree. News then came that her brother could be reunited with the family. Sikander finished his degree and got a job as a labour officer. He proposed to Santosh, and that was the beginning of my parents’ life together.

Then there was Nirmal Dhanda. The large Dhanda family had one sister, who was never found. Nirmal was walking aimlessly outside the camp. One Ved Sethi asked her to stay safe. He offered to escort her home. She said yes, he could take her home if he bought her some channa. She had not eaten for two days and was desperately hungry. Luckily, that’s all he could afford. He had only 50 paisa in his pocket. He used that, and both of them got to eat enough channa for the day. They became best friends and later got married after Ved got his first job in the government. Many years later, he retired as the director of the International Labour Organisation.

There are endless stories I have heard about Partition from my parents. Yes, stories of horror, of deprivation, of loss and of individual and collective grief. But there were also stories of love, resilience, bravery, courage and of moving on – told to be a characteristic of Punjabis.

In all these lives, there were many struggles. Partition and displacement was not a one-time loss, as we came to know when our father died at the age of 42. We were homeless again. For all those who came across the border, there were deaths, there was unemployment, and there were moves to other cities. But Partition, and especially the leadership of Gandhiji, had taught them to understand and look at life without anger,  revenge, hatred or retribution – this would only be hurting themselves. Moreover, they were in an India where there was hope, dignity, possibility and, most of all, the choice to move on.

To memorialise Partition is to record that there are always many narratives. Cherry-picking one narrative of hatred distorts history. Yes, the horrors have to be recorded in the context of what religion-based mobilisation for state power can do. But also in that record is the story headed by the Mahatma, who gave hope to the young people who actually suffered during Partition. His message trickled down to these young people, otherwise in hopeless situations, who could love, live and progress in a newly minted India. When they look back at their lived experience of Partition, they recall not August 14 but two other dates: August 15, as their day of hope, and January 31, as their day of horror when a bullet killed their hero.

Anuradha Chenoy has retired as the Dean and Professor at the School of International Studies, Jawaharlal Nehru University.