Making Sense of the Lingayat vs Veerashaiva Debate

Because of leaders and texts being dispersed across the country, much of the original Lingayat teaching was lost for centuries, giving rise to various confusions. 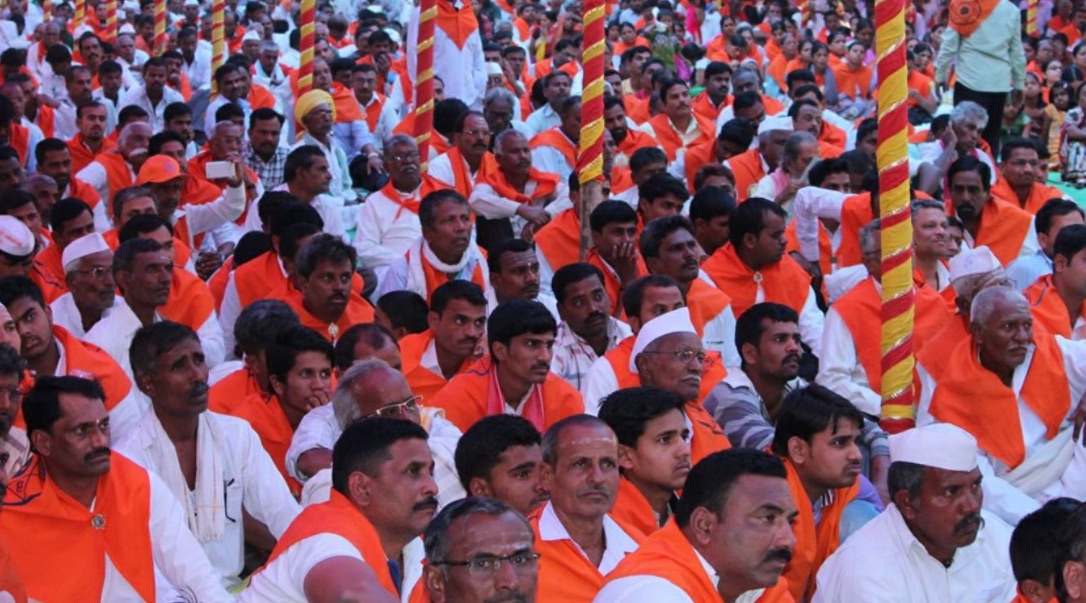 The 30th Sharana Mela at Kudalasangama in January this year. Credit: Twitter/@Lingayatas

Gauri Lankesh
History
Religion
Society
05/Sep/2017
Note: This article was originally published on August 8, 2017. The Wire is republishing it in light of Gauri Lankesh’s murder.

Are Lingayats the same as Veerashaivas? Are Veerashaivas a part of Hinduism? But aren’t Lingayats claiming they are not Hindus? A debate has been raging on in Karnataka over the last month around these three questions.

Let’s be clear about a couple of things at the outset. Though many people believed for a long time that Lingayats and Veerashaivas were one and the same, and that the words were interchangeable, they are very different. Lingayats are followers of Basavanna, the 12th-century social reformer who rebelled against Hindu society and established a new dharma. Veerashaivism, as the name suggests, is an order of Shaiva faith, which in turn is one of the two major Vedic faiths – the other one being the Vaishnava faith. Both Shaiva and Vaishnava followers constitute the sanatana dharma.

The essential difference between the Lingayata dharma and the Veerashaiva is that the latter accepts the Vedic texts and practices like caste and gender discrimination, while Basavanna not only protested these, he offered an alternative that is an anti-thesis of sanatana dharma. This debate assumes a larger significance these days, when Hinduism is being equated exclusively with sanatana dharma, in contradiction to the origin of the word `Hindu’, which included Jains, Buddhists and Sikhs. Shaivites, like Vaishnavites, are a part of the Hindu system of faith. And therein lies the difference.

But who mixed up these two streams of faiths and reduced them to flanks of the Hindu religion?

Veerashaivas are the followers of the five peethas (religious centres), called pancha peethas. These peethas are set up on similar lines to the four peethas set up by Adi Shankara. They even claim a mythological background. They believe that they are born straight out of the Shivalingam – the phallic symbol worshipped by Shaivas. Another account is that when Parvati created Ganesha out of the dirt from her skin, she challenged Shiva to match her feat. So Shiva created the first panchacharya from the flesh of his thighs. Whether such claims are to be taken seriously is another debate, but this definitely did not form the foundation of Basavanna’s thought. The Veerashaiva faith is identical to the Brahmanical belief that they are born from the ears of Brahma. Basavanna had rejected all such Brahmanical notions.

Basavanna’s spiritual ideology and revolutionary socio-political reforms were so radical that they attracted many like-minded people from across the country. In his time, some Shaivite Brahmins from Andhra Pradesh were attracted to the reformist movement and converted. But after about a century or so, their descendants started mixing practices from their former religion with Lingayatism. Another reason is that Basavanna’s movement culminated in all the sharana writers and thinkers being hounded out of Bijjala’s kingdom. In that process, much of sharana literature was destroyed and some it that was hidden. This created an intellectual vacuum for the Lingayat people, as well as the descendents of the Veerashaivas. But the Vedic texts were available and they were taught at all the gurukuls. So naturally, Veerashaivas and Lingayats gravitated towards a more Brahmanical way of life.

In this process, the panchacharyas propagated that since Lingayats also worshipped Shiva, they were also Veerashaivas and that Lingayats needed a class of gurus to initiate them into the religion. They established the pancha peethas (five muths), crowned themselves as the panchacharyas and claimed that they were the leaders of the Veerashaivas. They rejected Basavanna as the founder of the `Veerashaiva dharma’ and claimed that the founders of their dharma predated him. They also claim that Basavanna was initiated into the Lingayat religion by the Veerashaiva gurus, though no historical evidence supports that theory. To buttress this claim, they put forth a tome called Siddhantha Shikhamani and said it was their holy book.

The origins and contents of the Siddhantha Shikhamani are mysterious. In 1998, noted historian and writer M. Chidananda Murthy had stated that the Siddhantha Shikhamani was written sometime in the 13th or 14th century, and that it certainly did not predate Basavanna or his sharana movement. But the very next year, Chandrashekar Swamy, head of the Kashi peetha (one of the five muths), wrote his doctoral thesis, in which he claimed that the Siddhanta Shikhamani was older than the Ramayana. Murthy, who is now a flag bearer of the Hindutva brigade, immediately changed his stand even now parrots the same line.

Even more incredibly, Shivayogi Shivacharya, author of the Siddhantha Shikhamani, claims that the predecessors of the five panchacharyas were dharma pracharaks in the Krutayuga, Tetrayuga and Dwaparayuga; that they had given advice to Vibhishana of the Ramayana; that they had described the glories of Shiva to sage Agastya; that they had given the Chandramouleshwara Linga to Shankaracharya; the list goes on. Funnily enough, no Veda, Agama, Upanishad, Brahmanaka, Aranyaka or any text related to Shankaracharya or the Ramayana make a mention of any of these panchacharyas or their amazing activities.

Who are the Lingayats?

Lingayats are followers of Basavanna and the sharanas, whose philosophy is expressed in thousands of vachanas. In several vachanas, the sharanas have rejected the Vedas, shastras, smritis and the Upanishads. They also rejected the system of caste based on the varnashrama, rebuffed faith in karma based on caste, denied the concept of paap and punya which was based on karma, spurned the notion of heaven and hell as based on paap and punya. They scorned temple and idol worship. The rejected the phallic linga symbol of Shiva and opted for ishta linga, which represents inner conscience. They declared that work was worship and tried to break the barriers of caste by inter-caste dining. They fought against discrimination on the basis of gender and birth. They abhorred superstitions. They ignored Sanskrit – which was understood by very few – and addressed the people in Kannada. Essentially, Basavanna and all sharanas rejected everything about the Hindu religion and rebelled against it.

This is the reason why, for over eight decades, Lingayats have been asking to be considered as a religion separate from Hinduism. While the Indian constitution was being drafted, Lingayat members of the constituent assembly such as S. Nijalingappa (representing Mumbai), H. Siddaveerappa (Mysore) B.N. Manavalli (Ramdurg) and Ratnappa Kumbar (leader of the Lingayats in Maharashtra) had argued that Lingayats should be listed as a separate religion. Lingayat groups and organisations have been insisting that the census commissioner of India should list Lingayats as a separate religion. Their argument is that if Buddhism, Jainism and Sikhism – which were also born against the tenets of Hinduism – can be considered as separate religions, then why not Lingayats.

The 30th Sharana Mela at Kudalasangama in January this year. Credit: Twitter/@Lingayatas

But even they were confused about this Veerashaiva vs Lingayat issue. Early in the 20th century, the head of the Hangal muth established the All India Veerashaiva Mahasabha and declared that it was the representative body of all Lingayats and Veerashaivas. He went a step further and ensured that at a convention of the mahasabha held in 1904, where a resolution was passed saying Lingayats and Veerashaivas were Hindus. Yet, the feeling that Lingayats were not Hindus kept gnawing at the community. That is why 36 years later, in 1940, the mahasabha passed a resolution saying Lingayats were not Hindus.

But the mistake they made was in asking for a separate religion status under the name of Veerashaivas. Their demands were rejected on the grounds that since Shaivism was a part of Hinduism, Lingayats cannot be considered as a separate religion. During all this, the confusion over who were Lingayats and who were Veerashaivas, and if they had any connection with Hinduism, continued.

This confusion was mainly because, for nearly eight centuries, many of the 12th-century vachanas were either lost or were dispersed across Karnataka, Maharashtra, Andhra Pradesh, Tamil Nadu and Telangana. It was Phakirappa Gurubasappa Halakatti (1880-1964) who, in the 20th century, managed to collect 22,000 vachanas written on palm leaf manuscripts from various villages and sources, and reprint them. It is only over the last two decades that research on these vachanas and other materials by scholars such as M.M. Kalburgi, Veeranna Rajur, T.R. Chandrashekar and others has helped people realise not only the difference between Lingayats and Veerashaivas, but also how different Lingayatism is from Hinduism.

Now, many important Lingayat religious leaders, politicians and groups who believe in Basava philosophy are categorical about not being clubbed with Hindus and Hinduism. At a meeting held in Bengaluru on August 10, which the heads of the pancha peethas avoided, Lingayats demanded minority status for their community. One of the resolutions they passed insisted that those who did not believe in Basavanna’s ideology should not use his name henceforth. This has left Veerashaivas wondering where they stand in this conundrum.

In this entire debate, it is only flag bearers of the Hindutva brigade such as the panchacharyas M. Chidananda Murthy and B.S. Yeddyurappa who are caught between a rock and a hard place. Because if they support the demand for a separate religion for Lingayats, they would be denouncing Hinduism and Hindutva.

Most of the information in this article has been sourced from the writings of S.M. Jamdar and Basavaraj Itnal.

Gauri Lankesh is a senior journalist.