Jinnah’s initial demand for Muslims to be able to share power with Hindus was a legitimate approach towards political equality, though he later took it to the frustrating ends of communal politics.

The spectre of Muhammad Ali Jinnah haunts India again – this time in the form of a portrait that reminds of India’s pre-Partition history, and memory.

The portrait, hung in Aligarh Muslim University (AMU), simply portrays the lingering affinity to that history and memory. To imagine (and accuse) historical affinities as conspiratorial, is to succumb to the nation’s original sin: paranoia.

The attack on the students of AMU by a vigilante gang on a deliberate pretext, over a portrait that has stood since 1938, is a political move to rake up the monster of Partition. It is a move to tell the ‘minority’, ‘You are a minority, and your history and memory are not part of the nation’. That is a perfect Hindu majoritarian tribute to Jinnah’s fears. That the police were reportedly harsher on the students than the gang that attacked them, vacillating between sentiments and law, is a grave gesture against the secularity of our institutions.

Apart from this, AMU is also dealing with the issue of its ‘minority’ status, which the current government stands opposed to. The idea of a ‘minority’ always makes any majoritarian political ideology uncomfortable, as it means special constitutional rights and protection, as any fair democracy would guarantee. It is easier to demonise people in the name of a community (Muslim, Christian) than as a minority, as being minority is a condition that demands political responsibility. It changes the terms of discourse. Jinnah was aware of all this. But first let us sort out a bit of history, for Jinnah’s sake.

In Thy Hand, Great Anarch! Nirad C. Chaudhuri – polemicist, provocateur, the man the Hindu Right loved but could not impress – had this to say about the Quaid-e-Azam:

“Jinnah is the only man who came out with success and honour from the ignoble end of the British Empire in India. He never made a secret of what he wanted, never prevaricated, never compromised, and yet succeeded in inflicting an unmitigated defeat on both the British government and the Indian National Congress. … But for this very thing he has been pursued with mean malice by British politicians, Hindu politicians, and also by writers on both sides which had to admit defeat by his hands. It was said by them that all the misfortunes that came on the Indian people with the withdrawal of the British were due to his unreasonable extremism. But what is called his extremism was the minimum demand of the Muslims, and was known to everybody for years. Why did anyone expect the leader of the Muslims not to stand up for it? And if it was unreasonable why did both the British authorities and the Congress comply with it instead of calling his bluff?” [emphasis added]

From Chaudhuri’s assessment, Jinnah’s demand was fair, it was the least that Muslims as a ‘minority’ could have asked for, and its force (and legitimacy) was confirmed by the demand being granted. As a leader of a future ‘minority’, Jinnah had the right to “stand up” for the rights of his community. This latter point adds weight to Chaudhuri’s initial remarks that while Jinnah was clear about his politics, his opponents weren’t, and they ended up with defeat and eternal rancour.

Chaudhuri found it astonishing how the Congress, having “rejected the Cabinet Mission’s plan to retain the unity of India by giving the Muslims the chance to be dominant in certain regions”, later agreed upon a terrible disaster like Partition. It shows an alarming lack of political consistency on the part of the Congress, despite Jinnah’s fault in aggravating a complex issue. Jinnah’s demand for Muslims to be able to share power with Hindus was a legitimate approach towards political equality. Betrayed by the Congress’s change of stance on the Cabinet Mission Plan, Jinnah took this demand to the frustrating ends of communal politics, and irreconcilably moved towards the idea of Pakistan.

To seal another matter in history, about the Bengal side of Partition at least, Chaudhuri, who was witness to the event, wrote in Thy Hand about how Hindu leaders incited people to support Partition:

“In 1947, the Bengali Hindus were wanting it (Partition), and the Muslims were opposed to it. … I had been taking note of this new turn in Bengali Hindu political thinking for some two years from the end of the war. The idea of a partition was being put forward by two Bengali politicians who might have been called Hindu Ultras. At first I did not take that seriously, but when after the killings of 1946 in Calcutta the idea of partition gained ground even among the Hindus of East Bengal I became alarmed.” 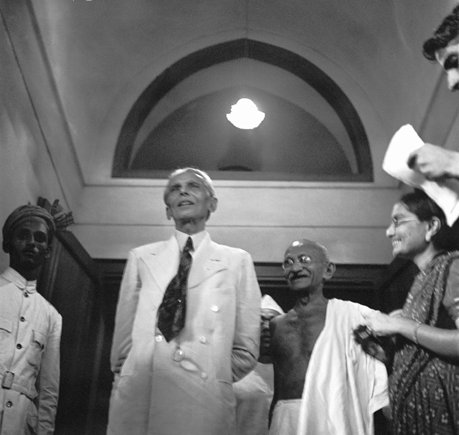 Yes, Jinnah’s announcement of ‘Direct Action Day’ on August 16, 1946 paved the way for communal clashes in Bengal, where initially every community was equally fierce on the other. The killings precipitated into the Noakhali riots of October 1946, where primarily Hindus were killed. Gandhi, who had travelled across Noakhali and adjoining districts on foot, publicly castigated the Muslim League’s interim chief minister of Bengal, Huseyn Shaheed Suhrawardy, for his dubious role in engineering the riots.

But Chaudhuri, despite being a pragmatist, did not see these riots as a cause for allowing fear to take over the future of the Hindu-Muslim relationship. Why did the Bengali Hindus succumb to the political logic – and calculation – of fear? And if they did, why blame it all on Jinnah and the Muslims? Chaudhuri, as always, has a scathing answer: “Like all weak people, they would not take the blame on themselves.” Ayesha Jalal, in her book on Jinnah, The Sole Spokesman, wrote about Congress workers conniving with the Hindu Right to foment pro-Partition sentiments among Hindus in Bengal. Chaudhuri’s account corroborates her view from the Indian side.

In the 1930s, Jinnah was suspected by other Muslim leaders to be soft on the Congress and Hindus. But the Congress repeatedly dilly-dallied with the question of political representation. Jinnah grew increasingly convinced that following independence, Muslims will have to play second fiddle in India’s polity. In his 1940 presidential address to the Muslim League in Lahore, Jinnah reiterated, “The Mussalmans are not a minority. The Mussalmans are a nation by any definition.” He then tried to establish the logic further: “To yoke together two such nations under a single state, one as a numerical minority and the other as a majority, must lead to growing discontent.”

Was political discontent merely about numbers or about politics? From the possibility of being an assertive, power-sharing minority in a unified India, Jinnah finally came to champion the other option, declaring the Muslims as a nation. Facing the constraints of political negotiation with Congress leaders, an exasperated Jinnah collapsed (religious) identity and nation. This was, by all measure, his greatest disservice to the subcontinent. His thin, secular legacy in Pakistan evaporated after his death. Hindu-Muslim relations got engulfed in Partition’s accusatory narratives, providing ammunition to the Hindu Right, whose ideology was firmly established since 1925.

Yet, we must acknowledge that Jinnah deserved a generous response to his initial political demands. His fears for the rights of the Muslim minority in India, of course worsened by Partition which he had a tremendous hand in, weren’t unfounded by any means. In the 1940 address, Jinnah mocked the idea of what he sarcastically called “the privilege to disagree” regarding the question of “safeguards of the rights and interests of minorities” to be ensured by the constituent assembly, entrusted with writing the constitution. He rejected the idea of the “judicial tribunal” Gandhi promised, about what he considered was an issue of “social contract”.

Airing the utter lack of trust in the political atmosphere, Jinnah wondered, once the British granted independence, whether the Hindu majority will meet the Muslim demands “with the help of the British bayonet” or Gandhi’s ahimsa. India’s political history after independence, beginning with B.R. Ambedkar’s discontents, Gandhi’s murder and the many communal riots that followed, told us that the politics of hatred ran far from cold. India confirmed Jinnah’s fears.

In their famous rounds of talks in 1944, all that Jinnah wanted – letter after letter and surely meeting after meeting – from Gandhi, was a clear plan of how to manage the separation of the Hindu and Muslim provinces and what share of power the Congress was willing to grant the Muslim League. Gandhi stubbornly stuck to the ‘Rajaji formula’, which Jinnah rejected. Why should a matter of justice be premised upon a ‘formula’? Jinnah couldn’t risk it, and the talks failed. India lost its last chance to establish a unique historical example, where the minority was given the rare honour to negotiate its place in the republic.

The minority, as imagined by Jinnah, was based on the language of communities, where secular principles will guide religious sentiments. Indian secularism retained that double sensibility, but only after losing its ties with the national minority that Jinnah had dreamt of.

Manash Firaq Bhattacharjee is a poet who teaches at Ambedkar University, Delhi.