Celebrating Archives – the Teachers, Witnesses and Resistance of Our Time

The journey of most archival documents is an unlikely one. 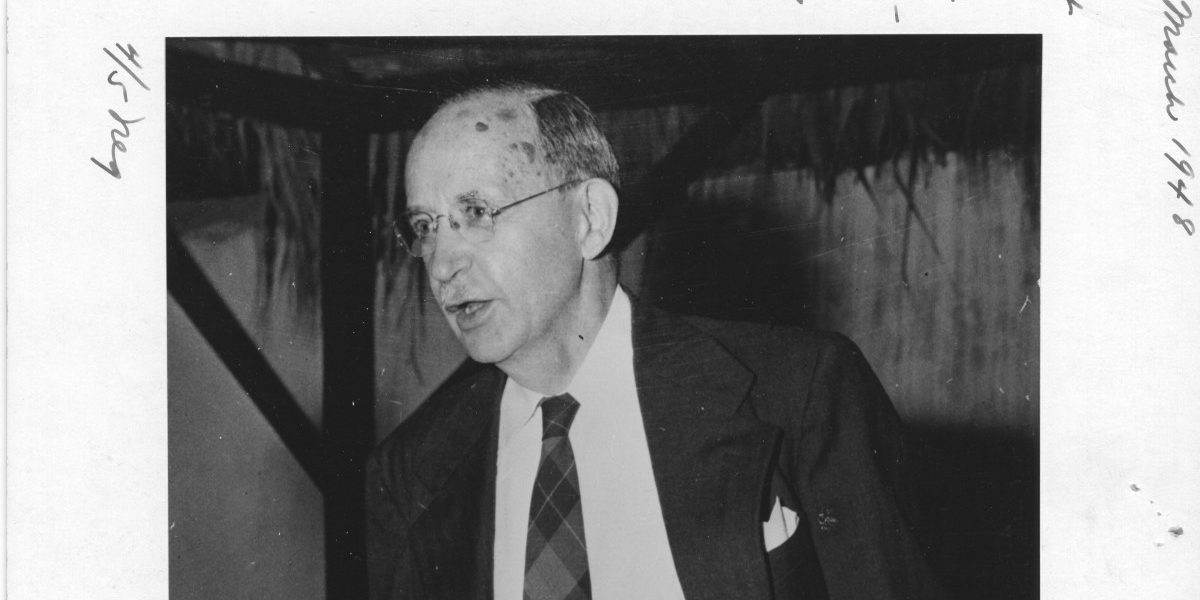 A war had just ended.

It was October 24, 1946, and Solon J. Buck, the archivist of the United States, was delivering an address at the 10th annual meeting of the Society of American Archivists in Washington, DC. “Another war would be such a profound catastrophe to civilisation that the archivist almost instinctively refuses to think about it,” he remarked. Throughout the Second World War, archives were actively working out ways to safeguard records. A ‘world catastrophe’ like the one everyone had been witness to was also a calling for archivists, he said, “to defend and preserve as much as possible of the archival heritage.”

Buck’s speech was entitled ‘One World’. It followed the formation of a United Nations. As he thought about the relationships of records kept at various archives, especially those of international organisations that don’t belong to any particular nation, he offered a new imagination for archives in this postwar world. “Should we not, therefore, think of all the archives of all the nations of the world, together with the archives of all international agencies of all sorts, as constituting the archives of mankind, the official record of human experience in organized living?”

One of Buck’s main pushes in his address was for an international organisation that would do just that.

The National Archives of the United States has a great summary of what happened then. UNESCO included Buck’s speech in a questionnaire to archivists around the world. And then over a three-day meeting between June 9-11, 1948, it brought them together in Paris to establish the International Council on Archives (ICA). Six decades on, in 2007, the ICA designated June 9 as ‘International Archives Day’.

Archives preserve context. The archive of a global archival body is no different: it shows that one aspect of ICA’s genesis was that it was a response to the crises of the times.

And the current crisis has a slate of archival responses. Indiana University has a COVID-19 oral history project. The Amsterdam Museum has a digital exhibition on ‘Amsterdam in the age of Corona’. A platform called ‘Quarantine Archive’ (#AQA) was launched in April 2020 by the Flemish Association for Library, Archive & Documentation and the Association des archivistes francophones de Belgique. A group of students in India are trying to capture memories around the pandemic. The Museum of Domestic Design and Architecture in the UK offers a podcast for “stories around home in the current crisis”. Platforms like PixStori offer ways for some to reflect on the archival ephemera of the pandemic, like this narrator in China does with her city’s ‘pass cards’ for access to certain areas. And if you want a resource space for how to document the moment, the Society of American Archivists has you covered.

Looking at these projects, one is forced to perhaps revisit the question of what an archive is. When the ICA was established in 1948, the focus may well have been on archives managed by institutions, government bodies – local, state and national – and international bodies like UNESCO itself. And that is one way in which we have historically seen the archive, going back all the way to archeion, the home of the archons – ‘chief magistrates’ – in ancient Greece.

Most archives today aren’t the home of the archon. Since the mid-1990s, we are probably more likely to encounter the word ‘archive’ on our email clients (as a storage space), and not as a well categorised and accessible record of human experience.

Still, even the archives of the tradition that Buck was referring to are not always about the relationship between the citizen and the state. They vary in form and content. We have archives for individuals and communities, schools and universities, municipalities, countries and international organisations, neighbourhoods in cities, disciplines from biology to banking, and many thematic archives around crises that have erupted around the world. Histories of the partition find space in the 1947 Partition Archive and the Partition Museum, for instance. The oral history repository around the Narmada Valley, an archive that sees what the state doesn’t, is the archive as both witness and resistance.

While they vary in so many ways, they would all broadly agree with the opening line of the ICA’s Universal Declaration on Archives: “Archives record decisions, actions and memories.”

Another war had just begun.

It was 2002, and Rollin Hotchkiss, a 91-year-old American biochemist pivotal in the field of molecular genetics, was not pleased with his government’s rhetoric on the “weapons of mass destruction” in Iraq. He wrote a comment that was published on November 22, 2002, by his county newspaper, the Berkshire Eagle. The US president, Hotchkiss wrote, “stages his own ‘weapons of mass persuasion’, both to arouse his own people as well as to intimidate [Saddam] Hussain’s. These actions and the war that threatens will be as destructive of America’s reputation before the world as it can be for Iraq’s welfare. How much safe and life-saving it would be if he abandoned his self-righteous vendetta and instead bent an equivalent persuasive effort in negotiating a peace that Iraq could not refuse!”

To this printed note, which he sent to Obaid Siddiqi, a fellow molecular biologist in India, Hotchkiss added a handwritten afterthought: “One of my efforts – foredoomed to failure, of course. RDH.” (Source: MS001-1-3-9-25, Archives at NCBS.)

The document, if we are to believe its Latin origin (documentum, docere), is a lesson. The document should teach. Hotchkiss’s note had an unlikely journey from Massachusetts to Bangalore. But it had an even more complex proto-journey that led to the creation of the everyday object. It started from the crisis of his time and the responses of the state finding space in Hotchkiss’s mind, and moving him to express his frustrations in a county newspaper. The archives evaluate and move objects from everyday to forever, and add other details to notes like this, making it visible to those who search for the ‘Iraq War’, ‘molecular genetics’, or ‘science–social aspects’.

The journey of most archival documents is an unlikely one. Each of these descriptions on the note gives it the possibility of quietly occupying that ‘little history’ corner. The archive cannot evaluate Hotchkiss’s original effort in sending a comment on peace to his county newspaper. But in the eyes of the archive, the note was not ‘foredoomed to failure’. The document always manages to teach us something.

The principal actor in the archival record is the source, the person who observes and then documents in some form and stashes it away. It’s hard to know what effects time will have on the everyday object. As I have written on the origin of an archive, “Luck, circumstance, decisions and process will do their dance.” But the archive always begins at the source. It starts with Hotchkiss’s thoughts.

The ICA campaign theme this year, ‘Empowering knowledge societies’, brings up a whole range of issues related to the relationship of the archive and humans. In his 1946 address, Solon Buck also talked about the pitfalls of any research that relied on material from a single source. “Scholarship that feeds upon the archival resources of a single country cannot be otherwise than one-sided and nationalistic,” he wrote. “The only antidotes are freedom of access to the originals in whatever country they may happen to be and the making and exchange of photographic facsimiles.” He called this an act of both internationalism and “enlightened nationalism”.

What are these centres of knowledge creation, curation and storage today? Who are they for? The present-day archive rattles around with a trail of questions that touch upon most aspects of civil society: who is an archivist, when does the object become worthy of an archive, can the archive be trusted, is the archive autonomous, can the archive be an agent of justice, what are the ethics governing what enter the archive, is my data safe, who owns the archival record, and who is the archive for. This is apart from the basic, practical issue of building a long-lasting, sustainable and accessible archive.

Many of these questions are being addressed this week, in discussions being conducted by a set of volunteers and organisations from across the country, as part of the International Archives Week. That is not to say that these questions around ’empowering knowledge societies’ have pat answers. It is only to stress that we should ask these questions if we are to create accessible spaces that record human experience.

Venkat Srinivasan is an archivist at the National Centre for Biological Sciences (NCBS), Bengaluru.