Akbar, and the later Mughals, celebrated a variety of festivals. This was one way of seeking political validation as well as constructing kingship over different ethnicities.

Note: This article was first published on October 19, 2017 and is being republished on November 7, 2018 on the occasion Diwali.

The Mughal association of light with divine kingship may not have directly influenced the celebration of Diwali. However, Mughals, during the early days of their empire, with Abul Fazl creating an institution of kingship through his words, and Akbar through his court culture, would have found resonance in a festival that had a political link (victorious return of Rama back to his kingdom), and was also a celebration of lights. The Mughal rule, that went through various shifts by the 18th century and had politically eclipsed by the 19th, did not stop celebrating Diwali, nor did they leave their claim to the grand Mughal throne.

Although we have multiple references to fireworks in different parts of Hindustan, in the Mughal context, fireworks are depicted in the context of royal weddings, Shab-i-barat, as well as Diwali. Fazl, who constantly uses the metaphor of divine light, mentions both these festivals and their association with lights in Ain-i-Akbari. Jahāngīrnāma also has references of court celebrations of Diwali. Jahangir calls it a festival of the Vaishya caste (probably due to their association with Lakshmi puja) and the occasion to meet friends. The memoir also mentions gambling. He writes, ‘Since this caste’s livelihood is from profit and interest, they consider carrying accounts forward and opening new accounts on this day a good omen’. 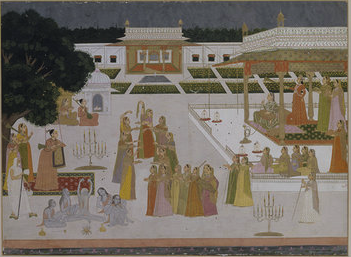 Painting, in opaque watercolour and gold on paper, a princess and ladies celebrating Diwali in a palace courtyard, in the presence of yogis and yogis. Credit: Victoria and Albert Museum

Mughals continued celebrating Diwali with feasts and fireworks. It became a part of the cultural ethos that Mughals had developed in Hindustan. In fact, the Mughal successor states of the 18th century too continued parts of similar ideas they had built their empire on. Apart from the fireworks depicted in Mughal paintings, we hear of the akash diya (the lamp in the sky), which was lit on a high pole during the Jashn-e-Chiraghan (festival of lights). Abdul Halim Sharar, while writing about the cultural history of Lucknow, describes that in Hindu mythology, the abode of Gods is considered on three spheres – the sky, the atmosphere and the earth. Hence, the akash diya is symbolic of the belief that stars are lamps lit in honour of gods of the first two spheres.

Malik Mohamed, in the book The Foundations of the Composite Culture in India, writes that during the time of Diwali, a puja darbar was held and two decorated cows with garlands of cowries were brought in the garden by the Brahmans, possibly because of the Govardhan puja that followed Diwali, or the Mughal capital Agra’s close geographical as well as cultural proximity to Mathura and Vrindavan. It’s also something attested by the fact that Akbar as well as later Mughals patronised various Braj language poets. The Mughal rulers, therefore, were familiar with Braj traditions and cultural idiom.

The Timurids or Mughals ruled major parts of South Asia from about the first half of the 16th century till the mid-19th century. Mughal rule began to face its worst political, economic and administrative crisis from the early 18th century as powerful Mughal subadars began carving out semi-independent successor states from within the Mughal state. Awadh Nawabi, Hyderabadi and Bengal Nizamats are best examples of such autonomous states. These states still kept nominal ties of power with the Mughal ruler in Delhi. In fact, when the British entered the political set up of Hindustan after the Battle of Plassey, it was by performing duties of revenue collection like those performed by a Mughal Mansabdar (rank holder).

What Mughals faced in the early 18th century, apart from the above mentioned issues, was an issue of legitimisation. The question is how did the Mughals manage it so far? What were the various ways in which the Mughals managed to get legitimacy for their rule in an absolutely new land? They had come from the Ferghana valley and were proud of their lineage, for they had lost everything but won it again in Hindustan when Babur laid the foundations of the Mughal empire in 1526 CE.

Many scholars point to the process of ‘Indianisation’ that the Mughals achieved by adopting local symbolisms of power, creating loyalties by incorporating local elites into the working of the Mughal state, marrying their family members to local elites and by adopting ways and means to formulate a culture that, in many ways, became specifically of Hindustan.

Others have shown in their research that the Timurid and Chengezi identities and legacies were also carried forward in many ways. These ways, in the early Mughal rule, appeared to have contributed in creating new institutions that were an important part in constructing in a new empire.

Among the early proclamations of theories of kingship, authority and legitimacy, we have the monumental work Akbarnama, written by Fazl, a courtier and close confidante of Akbar. Using metaphors and examples of various kinds, he conjured up a figure of a Mughal emperor like a benevolent father, that too in Persian – a language that neither had any religious connotations nor was native to Mughals. 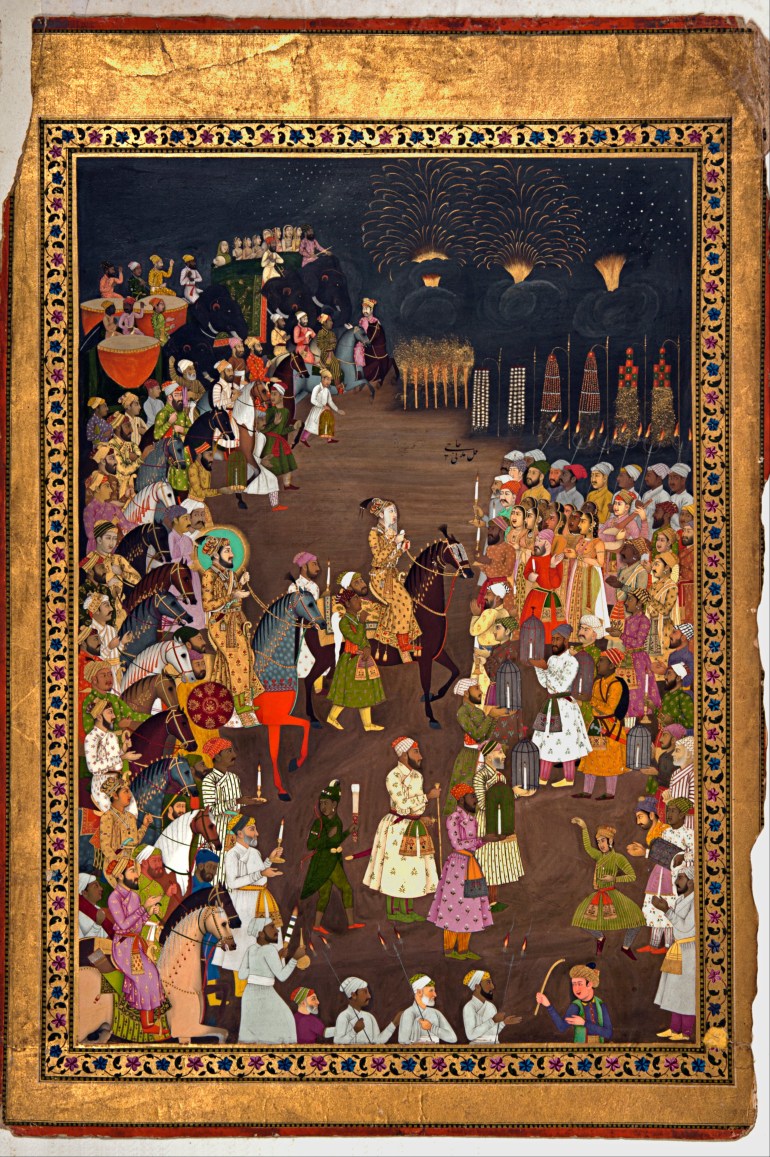 Emperor Shahjahan participating in an occasion of jubilation by tying on Dara Shikoh’s head the same sehra which was tied on his own head by his father, emperor Jahangir. Dara Shikoh is seen riding a brown stallion in the centre of the painting. He is followed by three attendants. Shah-jahan seen with a nimbus is just behind Dara Shikoh. Most of the invitees are on horses. The bride’s side is seen receiving the marriage procession with magnificent firework display. Source: Wikipedia, National Museum.

The Persian language that was formally adopted by Akbar was to use a non-religious language of a culture where the authority of ruler was un-compromised and unchallenged. Professor Muzaffar Alam argues that it was also the non-sectarian and liberal feature of Persia, that made it an ideal forum through which the Mughals could effectively negotiate the diversities of the Indian society.

Fazl created Akbar’s persona as Insan-i-Kamil (the perfect human) and Badshah-i-Adil (the just ruler). The notions, concepts and philosophies were not necessarily from any one religion, and the concept of divine light became central to the Mughal theory of kingship in his text. Gradually, the sun became the centre of Akbar’s Tauhid-i-Ilahi.

Fazl makes a brief but indispensable mention of Alan-qua, the mythical ancestress of Chengiz Khan who is said to have been impregnated by the divine light, thus staking a claim of Akbar’s kingship as well as the position of a spiritual guide. He used anecdotes and philosophies from various religions, sects and Sufi silsilahs. There are references to the divine light, Farr-i-Izadi (Suhrawardy doctrine of illumination). Douglas Streisand, in the book The formation of the Mughal Empire, writes that how Shihab al-Din Suhrawardi al-Maqtul merged the neo-platonic doctrine of emanation with the Zoroastrian view of light as the unseen but underlying essence of creation.

It is interesting to note that Fazl uses the more ambiguous and pre-Islamic word ‘farr‘ for light. It does not have religious connotations, unlike the commonly used term for light in Islam – nur. Farr can also be related to the sun, another potent symbol of light that is used very frequently by Fazl in the context of Mughal sovereignty. From the latter part of Akbar’s reign, Mughal emperors are almost never depicted without a golden solar halo behind their heads in Mughal paintings. Professor in his book, The Mughals of India, mentions how Aurangzeb coined the following chronogram of his accession to the throne: Aftab-i-Alamtab, which means the world illuminating the sun.

Akbar, as well as the later Mughals, celebrated a variety of festivals. It was one of the ways of seeking political validation and also of constructing kingship over a host of elites of different ethnicities. We hear of Holi, Diwali, Dussehra, Janmashtami as well as the Persian festival of Nauroz. Various representations in Mughal paintings, as well as in the Rajasthani, Pahari and later provincial Mughal paintings, show celebrations of these festivals.

In fact, scholars working on the technological development of gunpowder that came from China list it as one of the important factors in the development of strong, centralised state structures. It might have come before the 14th century, but was used in battles on a large scale by the Mughals. In Tarikh-I-Firuz Shahi, written by Shams-i-Siraj ʻAfif, we get a description of pyrotechnics involving ‘bursting’ of ‘flower scattering rockets’ (hawãi- hã- i gulrez ‘anberbez mi bakht) on the occasion of Shab-i-barat at Delhi during the reign of Sultan Firoz Tughlaq (1351-88).