The imposing walls of both the Taj Mahal and Aligarh Muslim University's Jama Masjid have Quranic verses crafted onto white marbles in black paint.

Constructed nearly 250 years apart, the Taj Mahal in Agra and Jama Masjid at the Aligarh Muslim University (AMU) have an interesting connection.

While the Taj Mahal, which is the tomb of Mughal emperor Shahjahan and his wife Mumtaz Mahal, attracts millions of visitors every year, AMU’s Jama Masjid is the main mosque of the university. AMU’s Jama Masjid is, perhaps, the last enduring symbol of the Mughals, constructed when the Mughals lost their kingdom during British rule.

As one enters the Taj Mahal, beautiful calligraphy adorns all four corners. Several verses from the Holy Quran crafted in black calligraphy on white marble can be seen. This is a unique form of calligraphy, and expert artisans from Persia were involved in creating it. Similar calligraphy can be seem inscribed at the tomb of Mughal King Akbar at Sikandra, Agra, and also at the AMU Jama Masjid.

A closer look at the white marble with Quranic verses in black colour adorning the walls of Jama Masjid in Aligarh Muslim University. Photo: Special arrangement.

In fact, it is believed that the artisan responsible for the calligraphy at the Taj Mahal also brought his expertise to AMU’s Jama Masjid.

Since there is a difference of nearly 250 years between the construction of both architectural wonders, it is interesting to study how this was possible.

During Shah Jahan’s regime, several buildings were constructed, including the Taj Mahal and Delhi’s historic Jama Masjid. The calligraphist used was the same.

Professor Nadeem Ali Rezavi of the Centre of Advanced Studies, Department of History, Aligarh Muslim University, says that the master calligraphist in most of the buildings constructed during Shah Jahan’s regime is the same person.

“His name was Abdul Haq, and later due to his craftsmanship, his rank was elevated. He was given the title of Amanat Khan. In fact, he even signed the bands on this calligraphy with dates,” says Rezavi

Still, there is a gap of over two centuries between these two buildings, Taj Mahal and AMU’s Jama Masjid.

The connection between the two monuments becomes clear with the involvement of Akbarabadi, one of Shah Jahan’s queens. Her original name was Aiza-un-Nisa. She, in 1650, commissioned the construction of a mosque situated in Daryaganj, Delhi, during the same period. In that mosque, Quranic calligraphy was done by the same artisan in black paint on white marble. This was around the same time as when the Taj Mahal was built.

After nearly two centuries, the Daryaganj mosque was demolished by the Britishers following the 1857 revolt. This was when Britishers gained control over the Red Fort, and the last Mughal emperor Bahadur Shah Zafar was sent in exile to Rangoon. They destroyed many buildings which were supposed to have harboured the rebels. At the site of the destroyed Akbarabadi Mosque, a park was developed and came to be known as Edward Park in 1911, which is now called Subhash Park.

During the same period, Sir Syed Ahmed Khan, the founder of the Mohammadan Anglo Oriental College (which later became AMU) felt the oppression against Muslims after the revolt. He nurtured the idea of setting up an educational institution to try and uplift the community.

A visionary man, Sir Syed had the taste for collecting things, particularly artefacts which had archaeological and historical importance. He was aware of the demolition of the Akbarabadi Mosque in Delhi.

As per the AMU Gazette, the scraps generated at the demolished Akbarabadi mosque were sold to a dealer and later purchased by Sahabzada Suleman Jah Bahadur. These remains were thus sold after over 200 years. These were presented to Sir Syed Ahmed Khan, who planned to use them in the Jama Masjid of the educational institution. 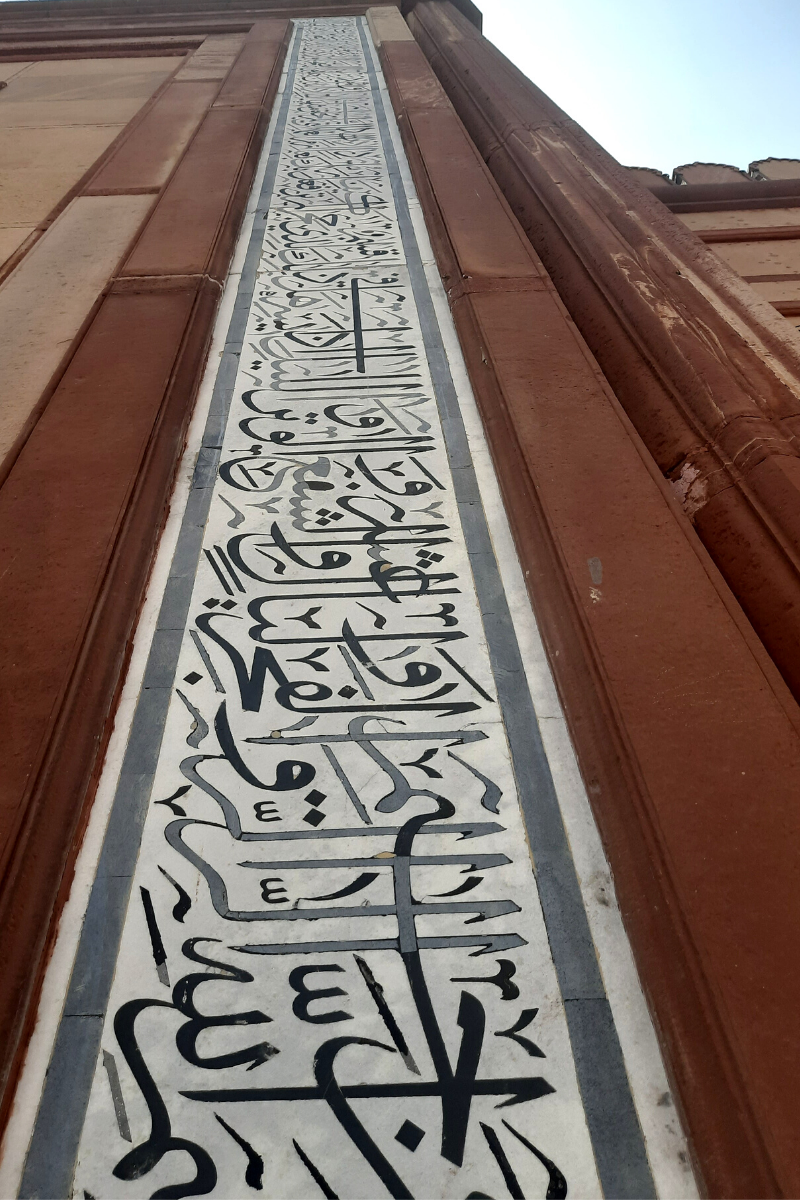 A closer look at the white marble with Quranic verses in black colour adorning the walls of Jama Masjid in Aligarh Muslim University. Photo: Special arrangement.

The white marbles with black calligraphy now present in the Jama Masjid of AMU depict Surah Fajr from the Holy Quran. Thus centuries apart, the two buildings carry the work of the same artisan.

“Even if you compare, it is the same thing and the only difference is in the scale. The artisans are the same who have shown their skills in the construction of the Taj Mahal,” says Prof. Rezavi.

“It is a brick structure, guava-shaped, carrying white marble with black stripes. This is the last true dome. After this, the particular technology faded out, and the buildings constructed after them have concrete domes,” said Rezavi.

Later, in 2016, AMU authorities began the conservation of the Jama Masjid. Now revived at the cost of Rs 90 lakh, the Jama Masjid has a Hauz in the courtyard, three domes, seven arches and two lofty minarets cornered by a Cricket Pavilion at its rear end. Sir Syed, the founder of the institution, was also buried in the same compound.