How Jodhpur Maharaja Takhat Singh’s Portrait Was a Trendsetter

The painting of 19th century Jodhpur Maharaja Takhat Singh is displayed at the Umaid Bhawan Palace. While many might have seen its reproductions, not many know how the portrait marks a significant change in the art of portraiture among the Rajputana royalty.

The stunning portrait of Maharaja Takhat Singh (19th century, oil on canvas) which marked a change in the style of portraiture in the region. Photo: Meherangarh Fort Museum via Laura Marsolek, published with permission.

On a cliff at the edge of the Thar Desert sits Mehrangarh Fort, a majestic structure around which the city of Jodhpur was built in the early fifteenth century. Its magnificent architecture housed the Maharaja of Jodhpur and his court, as well as the royal atelier which produced luxurious textiles, clothing, jewellery and paintings.

Readers may know this fort well as Mehrangarh Museum, a space open to the general public with the goal of educating patrons about Marwari life, art and culture. What they may not be aware of is that it was also the setting for a significant shift in styles of portraiture that occurred during the reign of Maharaja Takhat Singh from 1843 to 1873.

The Mehrangarh Museum maintains a vast holding of miniature paintings. These were often bound into albums or kept loose in portfolios, meant to be viewed in an intimate setting and only by an elite few. As illustrated in a painting—in the museum’s collection—of Maharaja Takhat Singh with a female companion, we can see that Indian paintings conformed to the Mughal-derived idiom in which the ruler’s face is seen in perfect profile with the body in a three-quarter position, standing or sitting.

A miniature-style painting of Maharaja Takhat Singh and a companion taking delight in the rains, by Shivdas (c. 1843–73, Jodhpur), which is in the Meherangarh Fort collection. Photo: Meherangarh Fort Museum via Laura Marsolek, published with permission.

The maharaja is depicted in a stylised fashion with simplified features, an unnaturally large eye, luxurious clothing that doesn’t believably drape over the body, and a nimbus or halo surrounding his head in an attempt to portray his divine nature. Artists sometimes made the ruler twice as large as their surroundings in order to emphasise their importance. The garden architecture in this miniature painting has a flattened effect and recedes into space without proper linear perspective. As a result, Maharaja Takhat Singh and his companion do not believably sit within the space, appearing larger than their surroundings.

The transfer of power from the Mughal emperor to the British Raj in the nineteenth century set in motion a cultural and artistic shift that would have a lasting impact on how Indian maharajas chose to be depicted in paintings. The British held direct rule over the Indian subcontinent beginning in 1858. By this time a British resident was assigned to live in Jodhpur as an extension of the British government, and whose duty was to maintain a peaceful working relationship with the Maharaja of Jodhpur.

Maharaja Takhat Singh enthusiastically entertained a relationship with the Jodhpur British resident by attending functions within the home and hosting Western-style banquets within the fort. According to K. Singh Jasol, the Museum director of Mehrangarh Fort, many believe that the maharaja attended a Christmas celebration at the British resident’s home because he curiously ordered Christmas tree bulbs to be installed on the ceiling of his personal bedroom within Mehrangarh Fort, still visible today.

These political relations resulted in an artistic exchange that manifested in a new style of portraiture never before seen in Jodhpur—portraiture took on monumental proportions. Painting shifted from a small and intimate scale to large proportions meant to be installed on the wall, having its own ‘presence’ within the room. This shift is visible first in Maharaja Takhat Singh’s portrait, a reproduction of which is publicly displayed at the Meherangarh Fort, while the original is in Umaid Bhawan Palace, the private residence of Maharaja Gaj Singh II and his family. But perhaps the most striking change is the focus on the subject and the realism with which the maharaja is depicted.

Western influence in Jodhpur brought in black-and-white studio photography, which profoundly changed the way maharajas documented their likeness and the way that painters depicted their patron’s appearance. Parallelly, Maharaja Sawai Ram Singh II of Jaipur was making his name as the photographer prince. His photos also aided this shift in royal portraiture. However, that’s a story for a different article.

Also read: Painting in Circles and Loving in Triangles: The Bloomsbury Group’s Queer Ways of Seeing

In this significant portrait, Takhat Singh is depicted in a frontal posture with his full face turned towards the viewer, in complete divergence from the strict profile view of miniature paintings. He wears a finely woven cotton jama and is adorned with layers of jewels from the Jodhpur treasury that proclaim his hereditary lineage. The painter has taken great care to expertly illustrate the fabric of the clothing as well as strands of pearls and Columbian emeralds that cascade over his figure. Previously, jewels were painted as abstractions or in a generic representation. Maharaja Takhat Singh wears his favorite style of turban, the khirkiya paag, so pronounced that it required a fitted copper frame underneath. His right arm rests on a balustrade, separating him from the jungle-like background that is framed by a colonial archway. The portrait is a brilliant combination of Indian and Western sensibilities.

A new style is born

Maharaja Takhat Singh’s son and successor, Jaswant Singh II, continued this tradition of monumental-style portraiture for his official representation. The painter, Bert Harris, likely worked from a black-and-white studio photograph of the maharaja in order to expertly imbue a sense of realism.

Numerous elements of the maharaja’s dress and decorum have meaning, from the famous ‘Jodhpurs,’ or fashionable riding pants, to the choice of resting his right arm on a book atop a writing desk as a nod to the Western ideal of a learned ‘man of letters’. The Columbian emerald necklace is the same as that of Takhat Singh, signifying the wealth of the Marwar state and his divine right to rule. He wears the Order of the Star of India garland, with a portrait of Queen Victoria, showing his loyalty to the Crown. 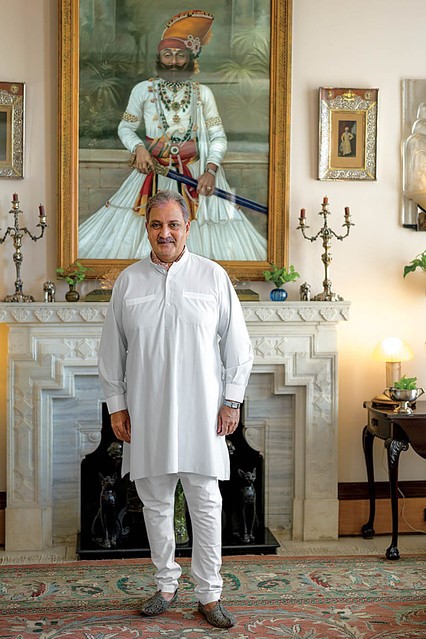 As one can see, the Jodhpur maharajas followed in the footsteps of their predecessors by adopting studio photography and integrating a Western style of monumental portraiture into their official image. Jaswant Singh II’s son, Maharaja Sardar Singh (1895–1911), had his full-length portrait painted by the same English portraitist, Bert Harris, in a similar style.

Monumental portraiture was not exclusive to the Jodhpur court, but rather an artistic shift that took place in numerous other princely kingdoms. There were hundreds of states within the Indian subcontinent, each with its own ruler, local traditions and customs.

By the end of the eighteenth century, British residents and local agents were posted in most major cities where they participated in rituals and, in return, welcomed their princely counterpart to their residency for Western celebrations. The fact is that this cross-pollination in culture and artistic tradition took place across the subcontinent.

Translating the princely appearance took on new proportions and, for the first time, large European canvases allowed Indian rulers of the nineteenth century to see themselves in a life-size image or even larger.

Studio photography had done away with lavish garden scenes and ornamental durbars, reducing the figure to a single sitting or standing image with minimal props. Indian rulers embraced these technological and artistic changes, finding ways to merge their ideas of royal self-representation into a new medium and format. A Western idiom of portraiture combined with unique Indian sensibilities had forever changed the way monarchs of the subcontinent were presented.

This article is part of Saha Sutra on Sahapedia, an open online resource for Indian arts, culture and heritage.

Laura Marsolek is an art historian, educator and a metalsmith holding an MA degree in Art History from Syracuse University. She lived inside the fort and worked in the curatorial department at Mehrangarh Museum Trust as a 2018-19 United States Henry Luce Scholar. She assisted in researching and inventorying the museum’s collection of decorative arts, jewellery and photographs. Following her time in India, Laura became a certified gemologist (diamonds and coloured stones) by studying as a fellowship student at the Gemological Institute of America’s world headquarters in Carlsbad, California. She currently works in the Fine Jewelry department of Heritage Auctions, in Dallas, Texas.