How Do You Defend a Nazi? (It Might Not Be As Hard As It Sounds.)

A chat with Hans Holtermann, defence lawyer for the ‘Bookkeeper of Auschwitz’ 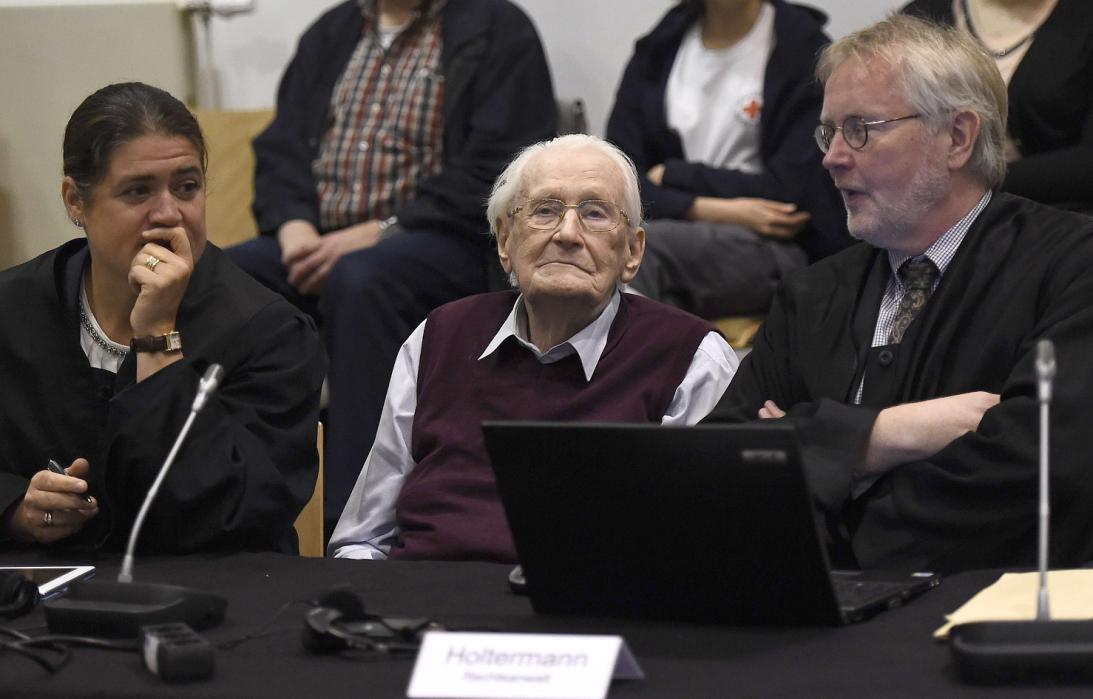 Oskar Groening (C), defendant and former Nazi SS officer dubbed the "bookkeeper of Auschwitz", reacts as he sits between his lawyers Hans Holtermann (R) and Susanne Frangenberg (L) in the courtroom during the verdict of his trial in Lueneburg, Germany, July 15, 2015. The 94-year-old German man who worked as a bookkeeper at the Auschwitz death camp was convicted on Wednesday of being an accessory to the murder of 300,000 people and was sentenced to four years in prison, in what could be one of the last big Holocaust trials. Credit: REUTERS/Axel Heimken/Pool

Hannover: Hans Holtermann’s face relaxed into a smile. He was trying to remember if he had faced any public backlash while defending Oskar Groening during the former Nazi’s trial last year. A single example came to mind. “Only one person,” he said, “tried to create some trouble.”

That person happened to be a neo-Nazi. “He tried to contact Groening to tell him he had the wrong lawyer,” he said. “That no one was killed in Auschwitz, that nothing happened there.”

It’s the kind of public backlash one would not expect a lawyer defending a former Nazi to get – not public ire, not outrage from victims, but the rantings of a right-wing Holocaust denier.

Holtermann recounts this anecdote during a conversation at his office in Hannover in north west Germany. White stubble studding his face, his keen eyes behind round glasses, Holtermann, 61, is a veteran criminal lawyer. “As a counsel for the defence sometimes you are identified with a client but I did not really fear that,” he said. “And I never got any bad reactions.”

He defended Groening last year, a 94-year-old man who in 1942 had been at Auschwitz, a concentration camp in Nazi-occupied Poland where more than one million people died. As a low-level staffer responsible for counting money confiscated from deportees, there was no evidence of his having killed anyone, but in July 2015, the court found him guilty of having been an accessory to murder.

Groening first faced charges decades ago but the file was not officially closed even though nothing was pressed. His trial began only in 2013 following a crucial judicial decision that said even lower functionaries could be tried. Groening is not in prison at the moment and is waiting for the decision on his appeal to be made by the superior court.

His lawyers previously argued that the case had first been opened nearly 40 years ago and that it should have been decided in a reasonable time. Furthermore, that in his case he had been willing to testify to what happened and that his actions were not punishable by law.

It is a particularly good time to be speaking to Holtermann, given that another similar trial is under way. Last month, Reinhold Hanning, a former Auschwitz guard, apologised in court for being part of the killing machinery, just as Groening had done before the sentencing. Hanning’s trial is taking place at Detmold, a town three hours away from Hamburg, in what is likely to be one of the last major Nazi war crime trials.

So what does it take to defend a former Nazi, a word which evokes a Pavlovian response of horror and disgust in most people and which has for long now been considered the apogee of human evil?

It might actually be easier than it sounds, especially in cases where the defendants have admitted their role.

Holtermann, was first approached by Groening in 2013, a request that he says took him by surprise. “When I started working,” he said, “I never thought I would defend a former SS member.”

But it was not simply a case of defending a very bad man who had done very bad things during Germany’s darkest days. It was about dealing with a 92-year-old man who had lived out a complete life as a perfectly ordinary individual, in full public view and with an awareness about his past actions. “It was not difficult,” said Holtermann, “it was obvious that his thinking had changed and was completely different from that of an SS member. He never tried to deny what happened or find any excuses.”

Before the trial began, Groening admitted to his role, but unlike several other legal systems, even if this is the case the matter must still go to trial. This meant the survivors, who would have been witnesses need not have given evidence. Even so, the court proceeded to allow them. “Although this did not bring out new facts as Groening had already made his statement, it was a good decision by the court to give them a chance to speak,” said Holtermann. “This is one of the last such trials and it was important for the victims to make such statements at a public hearing.”

Revisiting a painful history as part of a public act was a cathartic process for the victims. “They said they wanted the court to find him guilty, but they didn’t want him to go to jail,” he said. Groening himself at the trial chose not to ask for forgiveness from the victims. “He said it was such a unique crime that it was not even possible to ask for forgiveness,” said Holtermann.

Groening is not in prison at the moment and is waiting for the decision on his appeal to be made by the superior court.

In the immediate decades after the war, a series of war crime trials were held in which some high ranking officials were punished, but the rest were reabsorbed into society. Experts have pointed to a variety of reasons for this: lack of political will, administrative issues and a more restrictive reading of the law which meant that ‘followers“ or lower level staff were not found guilty. Now decades later, German prosecutors continue to revisit older cases following a landmark court decision in 2011, and even now preliminary investigations are going on in more than two dozen cases.

Most such alleged perpetrators would be in their late 90s or early 90s, which has led people to question whether any purpose is being served by trying them in their twilight years and whether there is a futility in prosecuting junior functionaries when so many top officials got off.

But even as a defence counsel, Holtermann’s view on this is clear. “We have to pursue these cases,” he said. “These have been unique crimes in the history of mankind.” To this end, he said, truth commissions, like those in South Africa and Ireland, might also be a bridge towards transition and healing of a tortured past. “For society and the survivors it might be helpful if we have that.”

This is the only such war crimes matter that Holtermann has been involved in. And being a close reader of history, nothing surprised him about the nature of the trial. “I had read a lot about Auschwitz so none of the facts were new,” he said. “But it’s different when you read about it, and different when you have actual people speaking about it in front of you.”