At a time when a detergent advertisement celebrating bonds of belongingness, of living together separately, infuriates people, it becomes imperative to ask deeper questions about the fabricating of religious boundaries. 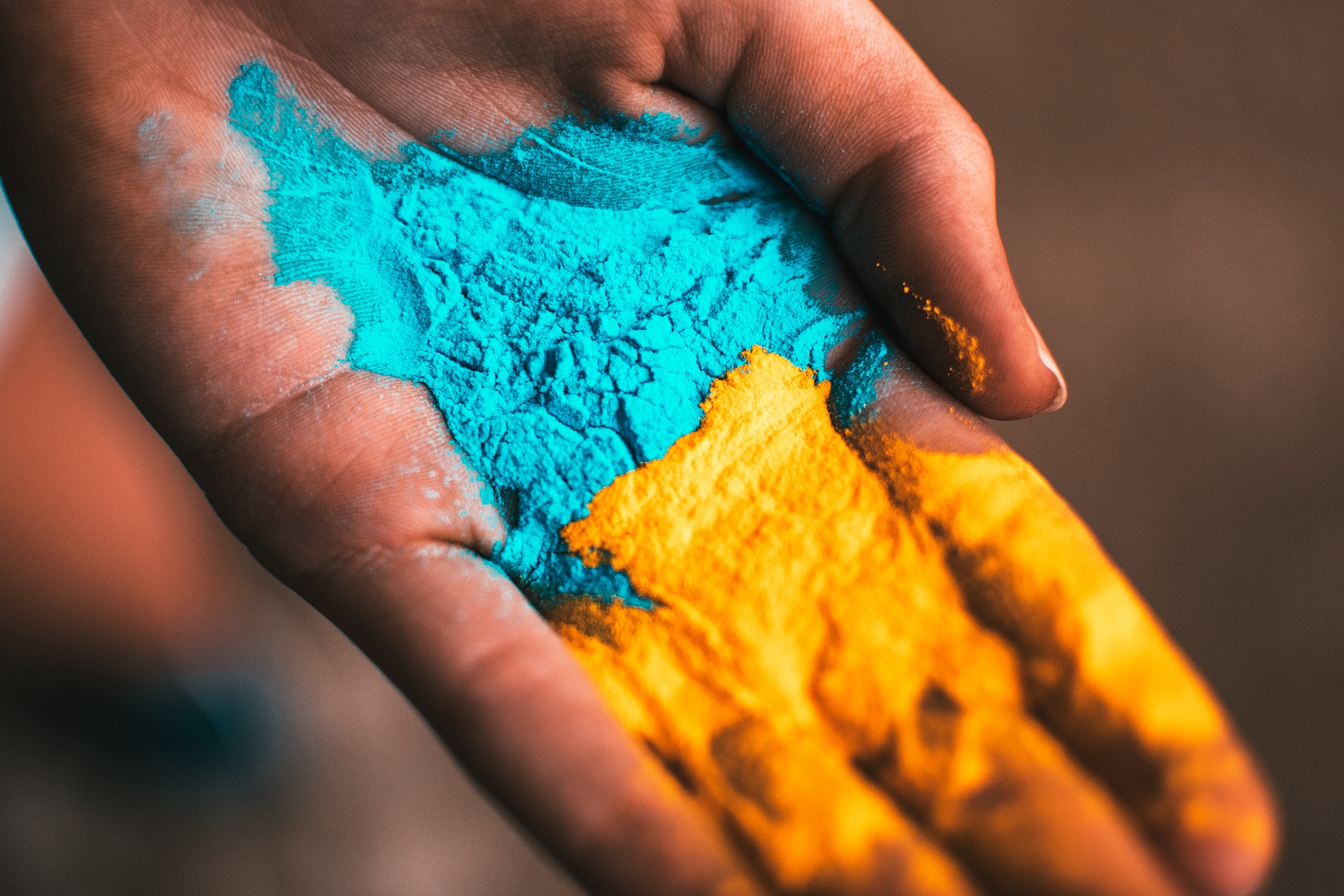 Calcutta’s middle-class neighbourhoods, with their ‘Bengalised’ art deco and art nouveau dwellings, weren’t quite the setting for a fervent, long-drawn Holi, as imagined and played in the northern part of the country.

What I remember is the suspension, if not dissolution, of boundaries of different kinds – spatial, linguistic, economic. One would come out of the house, onto the streets of the neighbourhood or the para to celebrate, which would then become a meeting place for people from other localities. Domestic helpers and other service providers would smear colours and shoot with pichkaris, not in defiance of established hierarchies, but perhaps with a sense of lax rigidity.

Even as a child it was apparent to me that Holi wasn’t a festival of utopian togetherness, but perhaps an interstitial “contact zone” of temporary transgressions, opening up a possibility of dialogue between “others” amongst ourselves, of people who “live together separately”.

In Banaras, the musical neighbourhood of Kabir Chaura has a diverse repertoire of musical aesthetics, often at unease with the impositions of colonial and postcolonial modernity. From supposedly, “heavyweight, masculine” forms like Dhrupad and Dhamar, to “lighter, feminine” Thumris and Horis, the musical tradition of Banaras is multifarious and characteristically early modern. The sheer range of narrative voices, both in song-texts and performances, straddle the worlds.

Girija Devi, or Appaji, as we knew her, would teach the choicest of Hori thumris to her disciples, luxuriant in pace and surprisingly playful, adept at articulating desires tuned to the hues of Kafi, Piloo and Khambawati. However, a sprightly composition, composed by the legendary Nanak Prasad Mishra of the Nepal Durbar, remained a favourite with listeners and learners alike. I’m referring to “rang darungi nand ke lalan pe”, beaming with the coquetry of the narrative voice, which is both feminine and subversive.

It is interesting to juxtapose the image of the composer as rendered by tradition and that of the narrative voice – the former, a deeply revered Guru known for wazandaar, manly singing, and the latter, a flirtatious maiden speaking in a folk register. The maiden expresses her desire to ‘make’ Krishna into a girl, complete with the trappings of womanhood.

Also Read: Despite Sangh Efforts to Project it as ‘Hindu’ Festival, Story of Onam Prevails in Kerala

The composer uses a figurative device to put his signature subtly, in the last verse, “daro ‘nanek’ dharo dau’n ko, bindi de de bhalan pe” – do not be afraid to perform the good, catch hold of the two (Krishna and Balaram), and put bindis on their foreheads. While ‘nek’ translates to ‘well-intentioned’, the composite ‘Nanek’ is the poet Nanak Prasad’s signature in the song. The queering of identities is perhaps made permissible by the clouds of gulal that blur boundaries and induce an inebriated fuzziness unique to Holi, when cross-dressing and being ‘feminine’ are considered as unproblematic, as divinely sanctioned buffoonery. In a classic Piloo thumri, ‘Ji na maaro pichkari’ (do not shoot colours at me),  the inimitable Siddheshwari Devi, laments the affliction caused by colours- ‘rang ki chot lagat hai’. Siddheshwari, in singing this phrase, musically embodies the wound. The feather-light and ephemeral tactility of the traditional colours, both in the form of dry powder and dyed water, is invoked through synaesthetic imagery.

This tactility alludes to the pain of love in treating the colour as a metaphor. Yet another composition from Banaras plays with the spatial context of the colour play- ‘Kanhai mai ankhiyan hori machawe, ankhiyan mein anuraag arunayi’ (O mother, Krishna plays Holi in my eyes, my eyes redden in love). 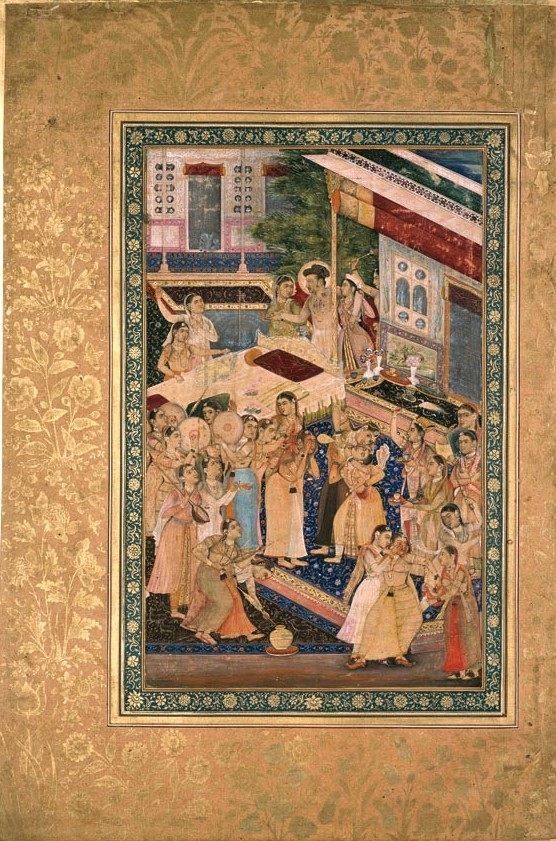 The visual archive of Holi from the early modern period is rich in narrative styles. Paintings produced in the courts of the Mughals, Rajputs in Rajasthan and the Punjab Hills, the Deccan sultanates, and subsequently in the Company schools, image the festival of Holi in their immediate historical context and add new colours to it.

One particular painting from the Minto album, now in the Chester Beatty Library, Dublin, depicts the Mughal emperor Jahangir playing Holi in the zenana. Painted in c. 1635 CE, the painting depicts the emperor being led by the ladies of the harem to the site of celebration, where we see singers and dancers, inebriated women drinking from wine flasks, smearing colours in intimate togetherness, in a homosocial space.

The emperor is an exception in this celebratory homosociality, by the virtue of his “patrimonial” powers, as the ruler of the realm. This powerful ‘other’ is part of the festival of colours in the Mughal harem, the only man in the world of the feminine, much like Krishna in the cosmic love games played in Braj, or the Sheikh in a Sufi Khanqah, the lover amongst beloveds.

Also Read: Onam, Mahabali and the Narrow Imaginations of the Right

The Mughals have drawn from a range of sacred kingship traditions, including the Jharokha-i Darshan instituted by Akbar, building on Indic traditions of beholding the divine, and fusing it with the Solomonic ideal of just rulership in the architecture of the Jharokha (Koch: 2001).

The Mughal cosmopolitanism comes out vibrantly in Jahangir’s paintings, where allegories from European texts brought by the Jesuits like the Royal Polyglot Bible and Achaemenid metaphors like the chain of justice figure with ease in an Islamicate setting. Art historian Ebba Koch notes that in a painting currently in the Museum für Islamische Kunst, Berlin, Jahangir had himself “represented as an Indian deity or ruler”, with a solar and lunar halo, scantily clad in a dhoti, seated in the lotus position.

The cultural memory of Jahangir’s cosmopolitanism was re-inscribed almost two centuries later, in a provincial painting from the Faizabad atelier in Awadh. Painted in c. 1800, it depicts the Mughal emperor playing Holi with the women of the zenana, this time the emperor smearing colours on the cheeks of a woman, in close embrace. Women of different skin tones, clad in different fabrics appear in different formations, as in the previous painting.

They are seen loading their squirt guns or pichkaris from a pool or hauz of saffron and yellow water, what could have been a concoction of the tesu or palash (butea monosperma), flavoured with the intoxicating zafran from Jahangir’s Kashmir Jannat Nazir (Kashmir that is paradise like), a politico-literary imaginary explored by Anubhuti Maurya. 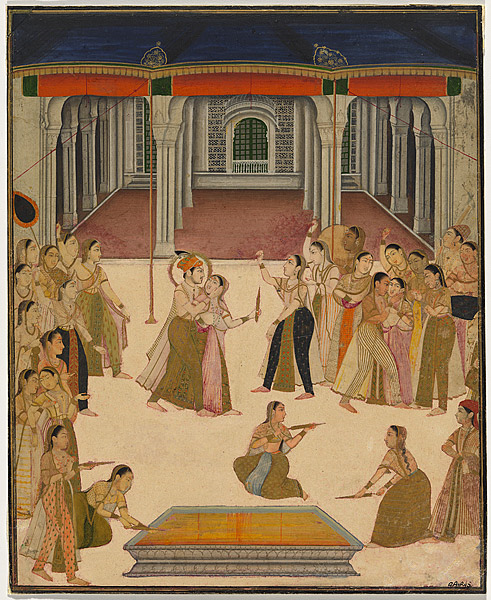 Holi paintings from the Mughal court, like many other transcultural expressions of the Mughal imagination, point to the nature of early modernity, the existence of multifarious identities, albeit not without confrontation and conflict but with a fluidity that is quite unimaginable today, despite constitutional provisions that mandate co-existence.

Also Read: A Touch of Tradition and Nationalism in the Celebration of a Popular Festival

The celebration of Holi has been integral to Islamicate North India since at least the 12-13th century, primarily in the hospices and tomb shrines of the Chishtiya silsila. With the onset of the spring, the courtyard of the dargah of Hazrat Nizamuddin Auliya (now a cult site of neo-orientalism), reverberates with compositions on Basant and Holi, many attributed to Amir Khusraw. Take, for instance, this verse from a traditional holi sung at the dargah:

(O Chishti, play holi with abandon in the land of Nizam

with a crown on your head, and squirt gun in your hand,

come to my courtyard to play)

The Sufi aangan is a contact zone. Pilgrims from different religions seeking the barkat (blessing) of the Sheikh, merging into a community of hamdardi, across lines that determine their other disparate identities. The image of a Chishti playing Holi, crowned with a headgear and armed with a pichkari, and the emphasis on the metaphor of khel, brings to my mind the Holi played by the Pushti-margis, with their worldly, erotic-aesthetic practices in service of the divine, raging from darshan (beholding the lover/God, adoration) to shringar (toilette of the divine), which informs much of our imagination of Vaishnavism.

In the early 1900s, the prima donna of Hindustani music, Gauhar Jaan, recorded what might be an unusual holi, perhaps even an unholy Holi, to the post-colonial ears – Mere hazrat ne madine mein manayi holi (My Prophet played Holi in Madina). At a time when a detergent advertisement celebrating bonds of belongingness, of living together separately, infuriates people, it becomes imperative to ask deeper questions.

Harjot Singh Oberoi, in his book, ‘The Construction of Religious Boundaries’ asks, “Where do the boundaries of these grand religions begin and end? Is it possible that our taxonomies excluded people from their own history and prevented them from making the statements they wished to make?” Hazrat playing Holi in Madina is certainly a statement. There are many more that the histories of pre-modern Holi make. For stains and blotches, that darn ripped fabrics, daag achhe hain.

Somok Roy is a history student at Ramjas College, University of Delhi.