Historically, the encounters between Islam and Hinduism have been beneficial to both. Din-e-Ilahi was a restatement of Dharma in a contemporary form. Photo: Wikimedia Commons

This is the second article of a three-part series. You can read the first here.

The idea of religion as a set of beliefs that have to be practiced and not simply professed is not limited to Hinduism, Buddhism and other mystical religions, but has managed to carve out a niche in Islam and Christianity as well. In the 11th and 12th centuries, it found a home in a Christian sect called the Cathars (or Albigenses) in southern France and Spain, and in some branches of Shia Islam such as the Alawis of Syria, Iraq and Turkey.

Not surprisingly, both sects have been treated as heretical apostates by the clergy of orthodox Christianity and Islam. In AD 1200, Pope Innocent III launched a little known Fourth Crusade against the Cathars, and instructed the knights and Barons who joined it to kill all they met without mercy, and leave it to God to sort out the heretics from the true believers. As for the Alawis, the most recent of innumerable attacks upon them in Syria has still not ended.

In the sharpest possible contrast, the confrontation between Dharma and Islam in India has been peaceful. Dharma’s first contact with Islam occurred when Arab traders came to Gujarat and built mosques there in the 8th and 9th centuries. Not only did this not spark religious conflict, but as contemporary Jain texts recorded, two centuries later, when Mahmud of Ghazni attacked the Somnath Temple, Arabs, who had by then been living there for generations, joined in the defence of the temple and died to protect it. The fact that Somnath was a Hindu temple did not matter to them. It had to be defended because it was important to the Hindus among whom they lived.

The second, more prolonged, interaction between Dharma and Islam occurred after the establishment of the Delhi Sultanate. This is the period that the RSS would like to erase from memory, if not history. It is what has motivated the Modi government to change Aurangzeb road to A.P.J. Abdul Kalam Marg among scores of other such changes in the BJP-ruled states.

But it is a period in which there was an unprecedented flowering of art, music and literature. It is the time of Amir Khusro, it is the time when khayal gayaki and Kathak dance were born, when the delicate penmanship of Persian miniature painting fused with the vivid colours of Hindu art to create a profusion of Moghul, Rajput, Kangra, Basohli and other schools of miniature painting. It is the time when Indo-Islamic architecture was born, and reached the heights scaled byHumayun’s Tomb, the Taj Mahal and scores of other monuments spread across the length and breadth of northern India.

Hindutva ignores all this and prefers to dwell on the defeat of the Rajputs, the destruction of temples and the conversion of large numbers of Hindus to Islam during this period. But here too its memory is selective and distorted. The Rajputs, who then ruled most of north India, were driven into the wilds of Rajasthan. But these defeats arose from the superior military technology of the invaders, such as the superiority of cavalry over elephants, and of archers over infantry – and not from any innate superiority of the (Muslim) fighters. On the contrary, the conquerors recognised the valour of the Rajputs and quickly inducted them into their armies.

The votaries of Hindutva harp endlessly about the damage the Muslim invaders did to the Hindu polity and society, but they choose to ignore the fact that the same Muslim dynasties saved India from the greatest scourge of the Middle Ages – the Mongol invasions that ravaged Europe. 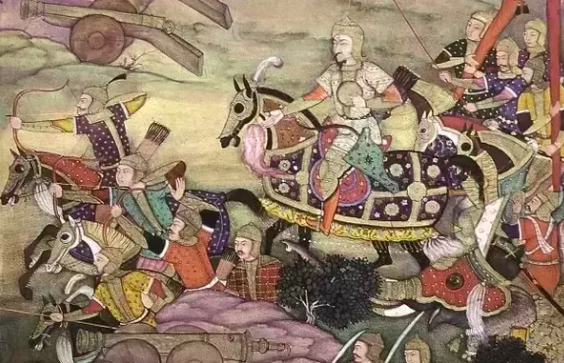 Like other impoverished groups from the Asian steppes, the Mongols first tried to invade India. The first foray, in 1243, took the Delhi Sultanate by surprise and the invaders were able to come all the way till Lahore and sack it to their leisure. But that was the last time they were able to enter the plains of India. Balban, the ruler in Delhi, created a standing army – India’s first – built a string of forts along the border and prevented all subsequent invaders from getting far into the plains of Hindustan. After his death, Alauddin Khilji inflicted two successive defeats on them in 1304 and 1305, with such great slaughter that they turned towards Europe and never returned.

Temples were admittedly destroyed, and precious art, sculpture and architecture irretrievably lost, but the motive of the invaders was pillage, not conversion to Islam. All but a fraction of the conversions that took place in the next 400 years were voluntary. The converts came from the lower castes. They converted because Islam offered an escape from the iniquities of caste – in much the same way as Buddhism had done two thousand years earlier, and as the Bhakti movement in south India had been doing since well before the arrival of the Muslims. Far from being a blot on the conquerors, the conversions were a protest against the Brahmanical, temple-centred Hinduism from which they had been systematically excluded.

Reconciliation between Hinduism and Islam

In northern India, the encounter between Islam and Hinduism proved beneficial to both in important ways that the Sangh parivar prefers not to remember. In Hinduism, it weakened the link between religion and the state by cutting off the single most important source of patronage to the temples. As state patronage dwindled, Brahmins, who had previously flocked to the peeths and mutts were forced to remain in their villages and tend to the spiritual needs of the villagers. The emphasis in their functions, therefore, shifted from presiding over elaborate temple rites to providing guidance on the issues they faced in everyday life. The importance of ritual in Hinduism therefore declined and that of Dharma increased.

Also read: What 13th-Century Poet Amir Khusrow Had to Say About Engineering

The Bhakti movement spread to the north and met the challenge from Sufi Islam by disseminating the core ideas of Dharma through the literature, poetry and song of Tulsidas, Surdas, Kabir, Rahim, Mira Bai, Tukaram, Chokhamela and a host of lesser-known poets, bards and singers. The interaction between the two made Hinduism accessible and mellowed Islam further, to the point where except for scripture, little remained of what divided the one from the other. No couplet I know captures this more succinctly than one by Kabir that I learned as a child and have never forgotten:

(Where dost thou seek me oh devotee, for I am right beside thee; Not in a temple, nor in a mosque, not at the Qaaba, nor on Mount Kailash, shalt thou find me).

This profound reconciliation between Hinduism and Sufi Islam is perhaps best reflected in the writings of Guru Nanak and the other gurus of Sikhism. And it was not confined to the villages. It was codified by no less august a person than Emperor Akbar and his counsellors in the Ibadat khana, as the Din-e-Ilahi, the religion of God, at the height of the Moghul empire. Some British historians have described it as an attempt at finding a new religion based on universal tolerance. The Encyclopedia Britannica dismissed it as a religion that never had more than 19 followers. In fact, Akbar had no such intention. The Din-e-Ilahi was no more than a distillation of what today’s corporate world would call “current best practices” of the heterodox population of India. It propagated sulh-i-kul – universal peace – and urged ten virtues upon the realm. Among these were: liberality and beneficence; forbearance from bad actions and repulsion of anger with mildness; abstinence from worldly desires; frequent meditation on the consequences of one’s actions and “good society with brothers so that their will may have precedence over one’s own”, in short, putting the well-being of one’s fellows ahead of one’s own.

Unlike Emperor Ashoka, Akbar issued no edicts. Nor did he create a religious police to oversee their observance. The significance of the Din-e-Ilahi lay in what it did not prescribe: It did not ascribe primacy to Islam, and it did not give a special place to Muslim clergy within the structure of the state. Instead, it declared emphatically that “he (the emperor, i.e. the state) would recognise no difference between [religions], his object being to unite all men in a common bond of peace”. The entire document was, therefore, a restatement of Dharma in a contemporary form.

In Hinduism, the practice of Dharma has been – and remains – sullied by its endorsement of the notion of ritual purity and pollution that is associated with caste. But its core idea, that true religion is not what we preach but what we practice, has remained the driving force behind all movements for religious reform from the Buddha till the present day. It is what Swami Vivekananda electrified the ‘Parliament of Religions of the World’ in Chicago in 1893 with, by explaining that Hinduism does not merely tolerate, but accepts, all the great religions of the world because they are like different paths up the same mountain, or different rivers that flow into the same sea.

In Pakistan, the same impulse has led to a sustained study of the writings of Dara Shikoh, Shah Jahan’s eldest son and heir apparent, a scholar of Sanskrit and translator of the Bhagavad Gita, who had wanted to promulgate the Din-e-Ilahi before his life was cut short by Aurangzeb. In 2010, the noted playwright, Shahid Nadeem, wrote a play, ‘Dara’, that highlighted his syncretism, as a protest against the rampant Islamic sectarianism that Partition had unleashed upon Pakistan and was, even then, tearing it apart.

Three years later, two Pakistani historians from GC University, Faisalabad, published a peer-reviewed paper in the International Journal of History and Research titled ‘Dara Shikoh: Mystical And Philosophical Discourse‘, which highlighted his belief that the fact that “the mystical traditions of both Hinduism and Islam spoke of the same truth.”

In 13th-century France, Roman Catholicism gave no quarter to the Cathars, and decimated them. In Syria, the attack on Bashar Assad’s secular Baathist regime was preceded by two years of relentless demonisation by Wahhabi and Salafi clerics. In Pakistan, Salafi extremism has come close to killing the syncretism that the country had known before Partition. But that syncretism is still very much alive in India.

It is what made Indian Muslims virtually immune to the lure of the Islamic State in Syria and Iraq. Numbers tell the tale: against 27,000 to 31,000 Europeans, only 106 Indian Muslims joined it. Of these, only three went directly from India. The rest were recruited while they were migrant workers in the Gulf.

This is the awe-inspiring syncretism of religion in India that the votaries of Hindutva and Hindu Rashtra are bent on destroying.