The 'India and the World: A History Through Nine Stories' exhibition narrates a global history of transcultural exchange and co-belonging in the day and age of fastidious nationalism. The Indian and the Tanzanian Hand axes on the left and right respectively.

Historians have put forth that the origin of the museum lies in the Wunderkammer or ‘the cabinet of curiosities’ where European aristocrats would keep their worldly purchases. More than their didactic pursuits, these eclectically kept cabinets soon became the repositories of wondrous things. Here was an exciting and intensely emotional relationship with science and history – a tendency to revel, take delight and pleasure in the unknown, the otherworldly, the unnatural and the unseen.

It is to this sense of wonder that Naman Ahuja and J.D. Hill return to in their exhibition titled India and the World: History Through Nine Stories, being currently held at the Chhatrapati Shivaji Maharaja Vastu Sangrahalaya (CSMVS) in Mumbai. Walking across a starkly dimmed corridor, through the passage of darkness into light – the birth of civilisations, as the curators interpret it – one encounters two identical wedge-shaped stone hand axes encased in a minimalist white glass cabinet. Considered to be the earliest tools that mankind developed for himself, these pieces of carved mineral, however, are from two vastly different geographical locations. One was discovered in Chennai and the other in the Olduvai Gorge in Tanzania, widely considered to be the birthplace of mankind. Behind these lies another glass cabinet with four more hand axes from India, Jordan, England and Indonesia, all dated within a largely similar time-frame of a few (hundred) thousand years. Large blue and white dish showing swimming carp. Discovered at Vietnam, now housed at the British Museum. An exactly similar dish lies beside this one at the museum, one that was discovered at Purana Qila. Credit: British Museum.

Vastly removed from the overflowing baroque cabinets of the Wunderkammers, these two quasi-identical stones, set amidst this tempered atmosphere, infuse a sense of wonder in those who encounter it. The wonder does not emanate from their purported distance in time (these are proto-civilisational tools) or their disparate provenances. It emanates from a similarity across time and space, a narrative that comes forth with the juxtapositions that this exhibition sets up. The juxtapositions speak of a shared history across continents, and provides a mode for understanding and living in a world where things fold and unfold, speak to and speak against each other. The exhibition is a dialogue through history, a tale of trans-culturalism told through objects of everyday – vessels, pots and bricks, coins, cloth, weights and objects of praying/preying. The wonderment, thus, lies in the detail: in shared minute aesthetic codes of fabulous workmanship and eye-opening discoveries. The joy of encountering an exquisitely carved green jade bowl from 14th century China, later discovered in Sudan, or the quasi-identical ornately painted blue-white porcelain bowls – one used in Vietnam and the other in the Qutub Shahi kitchens in Purana Qila. The objects reinvest the wunder to the krammer, the wunder of discovering unforeseen trade routes, networks and flows, an unsaid history of globalisation. If the European Wunderkammers augured a colonial history of displaying ‘exotic’ objects, then this Wunderkammer seeks its opposite. It allows us to re-configure our histories, seeking a need to speak about the networked, mosaic-like legacy of this planet. It is, therefore, in the section called Age of the Empires – a room housing exquisite royal busts from Greece, Turkey and Rome, and regal edicts/inscriptions from China and India – that a Buddhist limestone relic from Phanigiri is positioned. The pillar, itself shaped like a turban, depicts in detail Prince Siddharth’s renunciation of his turban: signifying the relinquishment of the throne and power. It is here that the ‘and’, an innocuous conjunction between ‘the India and the World’ becomes the functional word. Without the ‘and’ objects withdraw into their own selves, and with the ‘and’, the other becomes a necessity. It is the ‘and’ that initiates a conversation, a journey of finding and reaching out to the other. 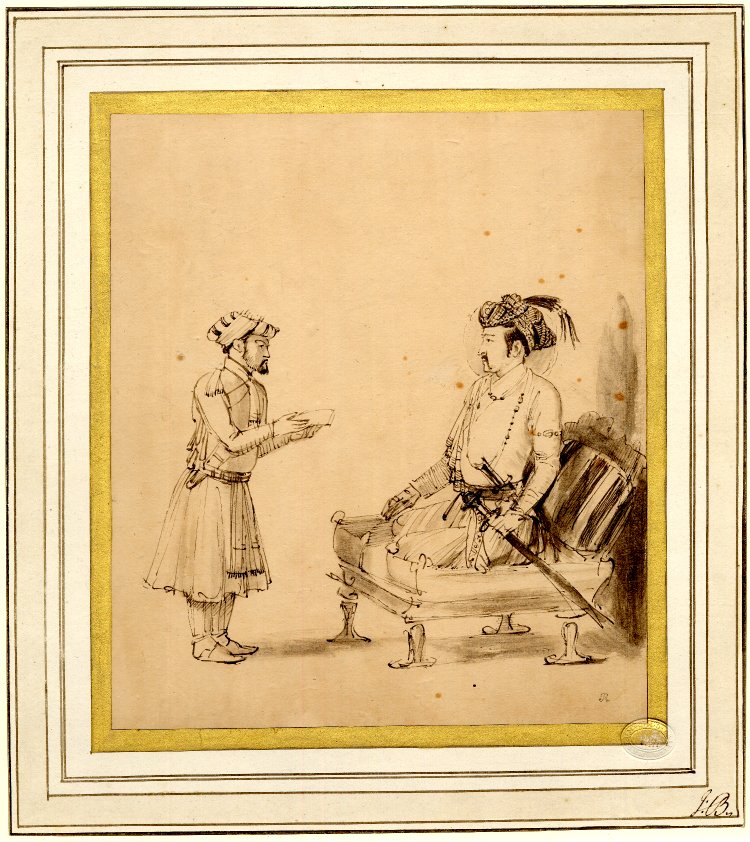 Assembled from across 20 museums and private collections, the exhibition is itself a transnational endeavor in making – brought together by the support of the CSMVS, Mumbai, British Museum in London and the National Museum in Delhi.

Spanning nearly two million years of the Earth’s existence, this linearly told narrative of the planet’s networked history is partitioned into nine stages corresponding to different stages of Indian history. 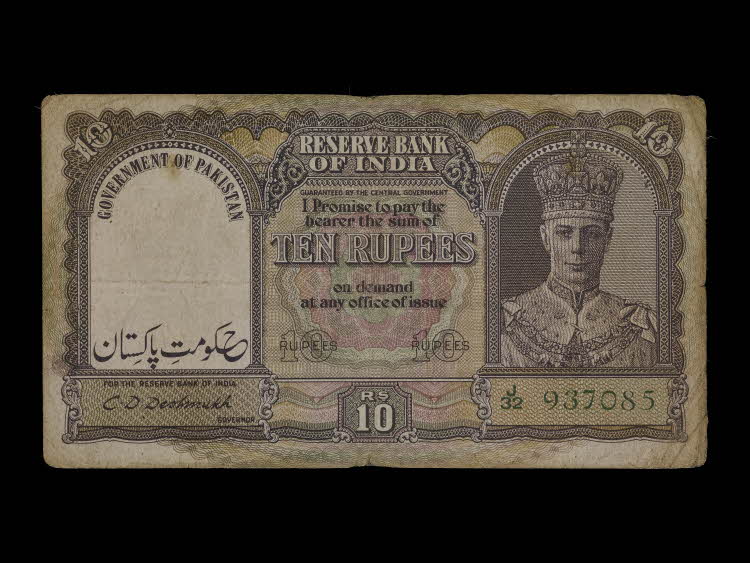 The obverse of a ten rupee note for the government of Pakistan issued by the RBI. Note bears the image of Lord Mountbatten and the signature of the the-then RBI chief C.D. Deshmukh.

Moving in time, the first three stages named ‘Shared Beginnings’, ‘First Cities’ and ‘Empires’ dwell upon the rise of civilisations , cities and kingdoms, enlisting a comparative history of writing, architecture, trade and transport, early bureaucracy and governance. The next segment, ‘State and Faith’ notes the rise of religious kingdoms as told through coins while ‘Picturing the Divine’ narrates a history of diverse and shared religious practices across cultures; from Pre-Columbian religious practices from Latin America, to mutating figurines of Buddha across Asia and a rare brass Alam from the Deccan. The next sections, ‘Indian Ocean Traders’ revels in the proto-history of globalisation, while ‘Court Cultures’ houses exquisite court paintings from medieval India and elsewhere, displaying, for one, a rare Rembrandt sketch of Jahangir’s court. ‘Quest for Freedom’ visibilises modernity as the global history of colonisation and independence movements. The exhibit even displays shared currency between India and Pakistan from the Partition, both bearing Mountbatten’s insignia and the-then Reserve Bank of India chief C.D. Deshmukh’s signature. Introspecting about the very fallacies of civilisation-based histories, the exhibit concludes with ‘Time Unbound’, displaying artworks from indigenous/aboriginal peoples from India and Australia that relate to dreamtime, mythical or non-linear time. Interestingly, the exhibit ends in a dark chamber of non-civilisational art, short-circuiting us back to the pre-civilisational passage of darkness: to where it all began.

Pujita Guha is a doctoral candidate in cinema studies at Jawaharlal Nehru University.