The diverse ways in which the Deccani identity is invoked in textual sources and oral traditions indicate that newcomers to the Deccan adapted to the ways of the land, developed strong affinities to local landscapes, and adopted cultural practices and markers. 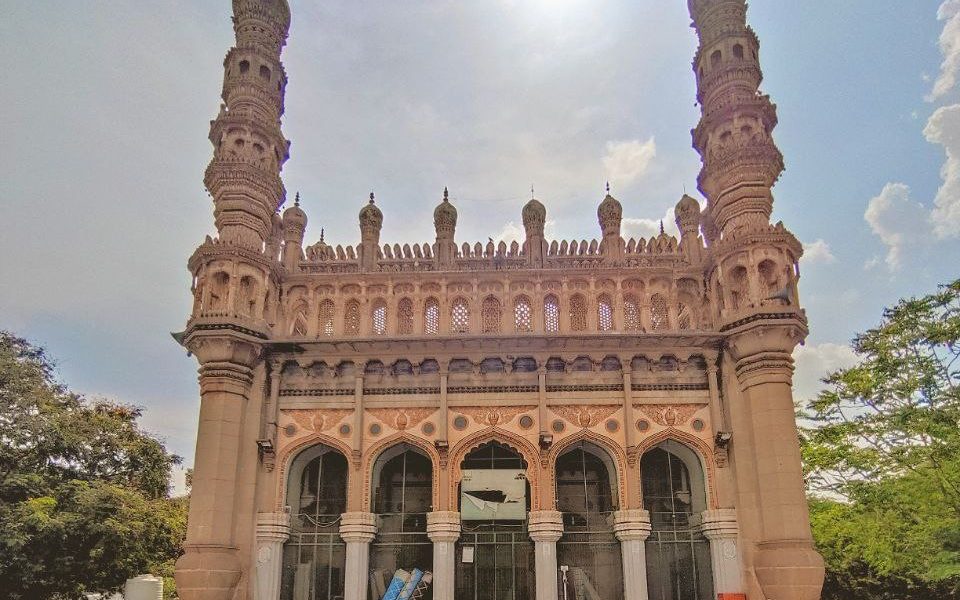 Toli Masjid at Karwaan has interesting influences from Kakatiyan-Vijayanagara architecture. The minarets originate from a Kalash (pot) and the balconies on the minaret are supported by corbels which are often found in 13th century Warangal. Photo: Sibghatullah Khan 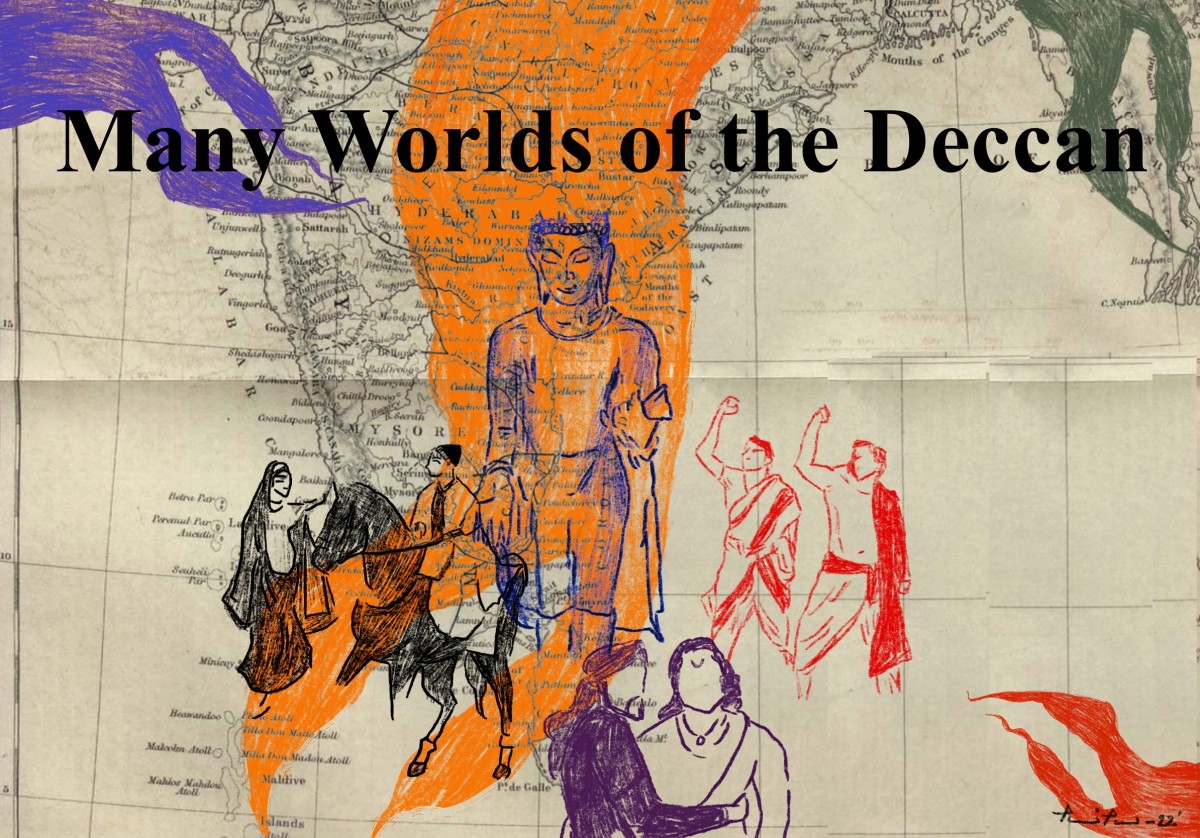 (Says the traveler, from the North, who has visited innumerable cities,
“I have seen Delhi, I have seen Bombay, and seen Calcutta too;
But nestled in the lap of the Vindhyachals, the Deccan nation is such,
One who comes here once, never returns to his own country.”)

Perhaps the earliest known sources of the idea of a distinction between the southern and the northern regions of the Indian subcontinent lay in  the scriptures and stories of Ramayana and Mahabharata (and possibly in the Vedas). Sage Agastya in both Ramayana and Mahabharata was said to have lived on the southern slopes of Vindhya mountains which marked a notional boundary between the north and the south. Subsequently, in texts and oral traditions belonging to Buddhist, Jain, and a number of Vedic philosophical traditions the distinction between the South and the North persists and gets reiterated.

Certainly, in the last one millennium the Deccan which territorially accounts for a major part of the south, has been exceptionally successful in warding off repeated attempts by the Northern plains to subsume its distinct socio-cultural individuality. Its renowned prosperity during medieval times attracted migrants in search of better opportunities, who assimilated with the culture of the land to a great extent. Some scholars argue that the newcomers were driven by an instrumental reasoning that this assimilation was necessary merely to gain legitimacy, authority and power. However, there is much evidence to suggest otherwise.

Initially, the eagerness among the newcomers to shed vestiges of their past identity and readily absorb the Deccani culture may have been prompted by the 1347 CE revolt of the Amiran-e Sadah, the Tughlaq era Grandees of the Deccan. They were driven by a compelling desire to dissociate culturally from the centre at Delhi in order to fabricate an identity for themselves and the ‘nation’ that they had created. An example of amalgamation with existing practices can be seen in the architecture of the Deccani sultanates in which the influences of south Indian temple art and architecture are immediately apparent.

Dakhni language is another sphere where the amalgamation is pronounced. A synthesised language, Dakhni borrowed equally from Persian and Sanskrit, apart from absorbing vocabulary from Marathi and to a lesser extent from other vernaculars of the Deccan. Adopting and owning cultural markers from their new home was therefore as much an attempt to gain local legitimacy as it was an attempt to discard their older moorings. The resulting amalgamation became a new identity by itself and for the Deccan sultanates and its inhabitants. There is convincing evidence in the imperial archives that even the Mughals considered the Deccan as being a separate country, outside the bounds of Hindustan. We thus find Mughal poet Aquil Khan’s conceding that the Deccan is far more alluring than Hindustan, albeit with a proviso that it is so because of Aurangzeb’s presence in the region!

Golconda poet Tib’i couplet points to a deep love of the land that cannot be explained away as instrumental logic.

(The one who forgets his nation,
Is but a corpse; the shroud his rightful garb.) 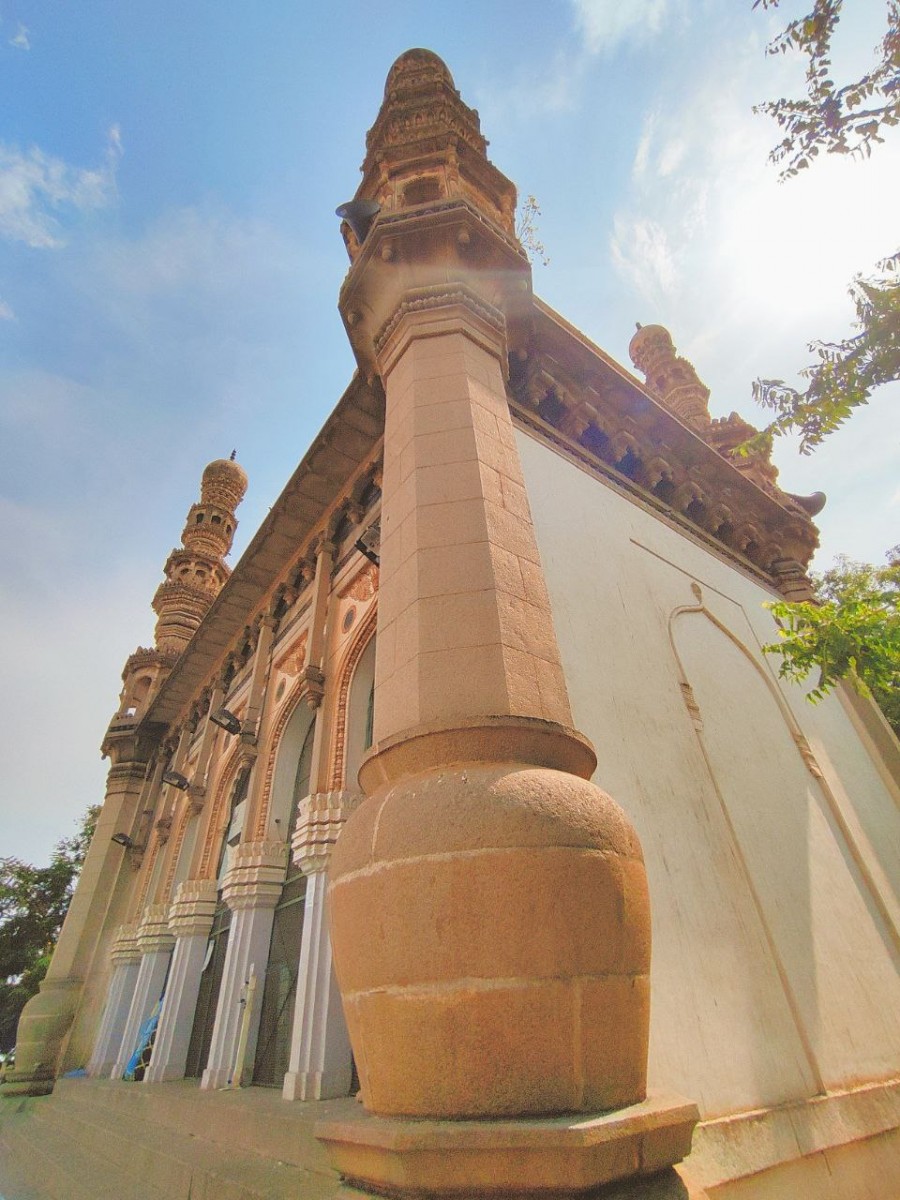 Toli Masjid at Karwaan has interesting influences from Kakatiyan-Vijayanagara architecture. The minarets originate from a Kalash (pot) and the balconies on the minaret are supported by corbels which are often found in 13th century Warangal. Photo: Sibghatullah Khan

This Deccani identity then manifests in many forms: sometimes as suspicion of ‘foreigners’ in general and north Indians in particular. One of the earliest forms of this can be traced to the Dakhni – Afaqi conflict of Bahmani times. An influx of migrants from Persia, who were referred to as Afaqis (aliens), and their increasing influence over the Royal Court was strongly resented by the entrenched Dakhni population, who by then had succeeded in forging the concept of Deccani nationalism. The conflict eventually led to the assassination of Mahmud Gawan, the Afaqi Grand Wazir of the Bahmanis, triggering the decline and eventual fall of the dynasty. That these sentiments prevailed in the region and found expression periodically is substantiated in historical accounts. During the rule of the Nizams, they would reappear once again as the Mulki-Non Mulki (National-Foreign) conflict against the large-scale induction of North Indians into Hyderabad State service. Post reorganisation of states on linguistic basis, settlers from Andhra would replace North Indians as the undesirable Non-Mulkis. This wariness lay at the heart of the political and economic struggle that led to the Telangana state eight years ago.

In the Dakhni corpus, one often encounters vociferous proclamations of nationality. What begins with displays of pride in the motherland in early Dakhni works transform into vitriolic diatribes against the Mughals when they invade the Deccan. Nusrati, the court poet of Bijapur and author of the Dakhni epic Ali Nama, showers the choicest of expletives on the Mughals. He depicts them as cowards of questionable origins who excel in subterfuge and are quite capable of draining the last drop of blood from even their closest kin for even paltry gains.

The Deccani identity took a firm hold of the region by the time of Mohammed Quli Qutb Shah, the founder of Hyderabad. The poet laureate of his times, Asadullah Wajhi, is thus not content with merely adulating the Deccan. He is compelled to declare that his own region, Telangana, is indeed the very best even within these glorious lands.

(Comparable to the Deccan, there is no place on earth;
Indeed, to innumerable intellectuals it has given birth.
The Deccan is a gem, the world a ring;
And verily the gem makes it a worthy thing.
Amazing grandeur to the Deccan nation brings renown;
For all other nations together, wear the Deccan as a crown.
The Deccan – a land of dazzling luminescence,
And Telangana indeed is its very essence.) 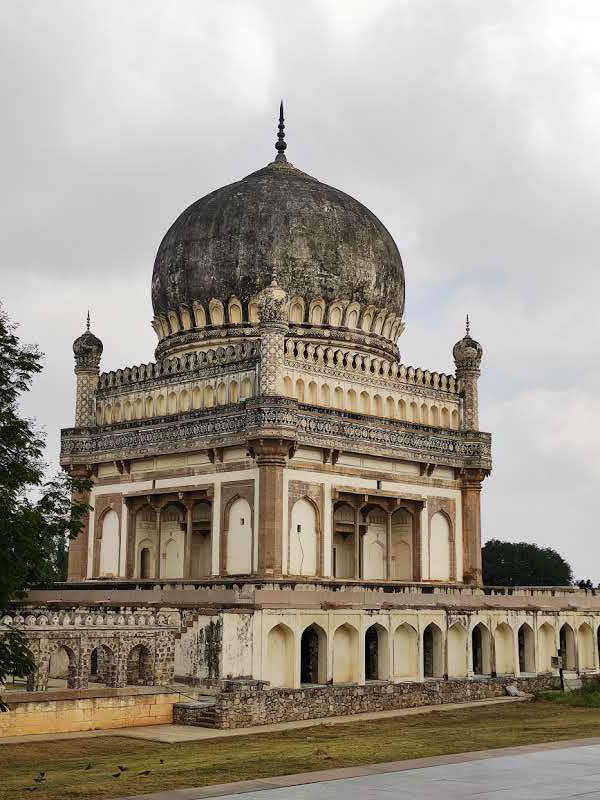 The tomb of Muhammad Quli Qutb Shah has one of the first evidences of stone being used on a mausoleum within the Qutb Shahi Necropolis. This is after the fall of Vijayanagara and sacking of Hampi in 1565. Photo: Sibghatullah Khan

Post independence, nationalist historians have on occasion claimed that the Mughals succeeded, where most others had failed, in forging a monolithic identity for India and its citizens by bringing about a “a political uniformity and a sense of larger allegiance”. We just have to look at the Deccan region during that period to realise the limits to this assertion. The successor states of the Bahmanis remained steadfast in their conviction that they were different. Their point of view persisted well into modern times with inhabitants of the region asserting their nationality as being “Dakhni” in contrast to north Indians who were designated “Hindustani”. There still exists, even if only in name, a locality in the Troop Bazar area of the city, which is known as Hindustani Galli.

Soon after the Asaf Jahis took control of the Deccan in the 17th century, the process of differentiating their regime from that of the Mughals was afoot. When the curtains finally came down on the Mughal dynasty in 1857, Hyderabad witnessed a fresh wave of migration from the north. With Oudh having already been taken over by the British, Hyderabad was largely perceived as the last remaining vestige of the Mughal empire. The Nizam and his nobles may have been happy with being identified with the Mughals. But the general population was reluctant to yield space to the hordes from Hindustan who made a beeline for their state.

Also read: What an 18th-Century Sale Deed Reveals About Language and Territory in the Deccan

When Nizam Ali Khan shifted capital from Aurangabad in 1769, a large number of his nobility and administrators moved with him to Hyderabad. An area close to the Charminar was earmarked for housing officials of the realm. As most of them were descended from ancestors who had been part of the Mughal administration, the locality came to be known as Mughalpura, the Mughal quarter. It is thus rather amusing to note that these comparatively recent migrants were voicing their own resentment against the next wave of arrivals. One of the most deprecatory warnings to the new comers was penned by a resident of this then upmarket locality.

(Tread with caution here o’ you Hindustani;
This is Mughalpura, not your Delhi)

Inhabitants of the Deccan claim that they are more deeply rooted in their region when compared to people from other parts of the country. That there is some truth in this assertion becomes apparent when one encounters expressions of determined resistance to change, both geographical and linguistic, in the Dakhni corpus in post the Sultanate period. We thus find Syed Meeran Hashmi, in his epic Yousuf Zulekha composed in 1689, willing to even risk his livelihood rather than change his Dakhni diction to suit the Persianised tastes of his new patron who happens to be a Mughal.

(Why bother about patrons, in your own words do state;
Your poetry is Dakhni, and only in it should you narrate.)

Around the same time, we encounter Qazi Mehmood Bahri (d. 1718) refusing Aurangzeb’s offer of a life of luxury in the North and preferring a life of penury in the Deccan. He claimed that his bond with the Deccan was akin to what  existed between Nal and Damayanti. As such, for him, remaining in the Deccan was as integral to survival as it had been for the epic lovers.

(Bahri and the Deccan are akin to Nal and Damayanti,
For it’s binding for Nal to not part from Damayanti.)

The diverse ways in which the Deccani identity is invoked in textual sources and oral traditions over the last millennium indicate that newcomers to the Deccan adapted to the ways of the land, developed strong affinities to local landscapes, adopted cultural practices and markers. Although the North-South distinction in the landmass of India is much older, the Deccani identity begins to get crafted around the time of the fall of the Delhi Sultanate. Since then, it evolved into a rich composite identity which serves both as a site of belonging and as a way to distinguish oneself from others.

Sajjad Shahid is a practicing civil engineer with a keen interest in history, culture, art and architecture of Hyderabad and the Deccan.