Crosstalk: When Galileo Saw Some Moons, and Other Stories of Invention

Places that foster conditions to drive innovation, enterprise, and curiosity driven-research will continue to thrive, and incubate the inventors and discoverers of the future. 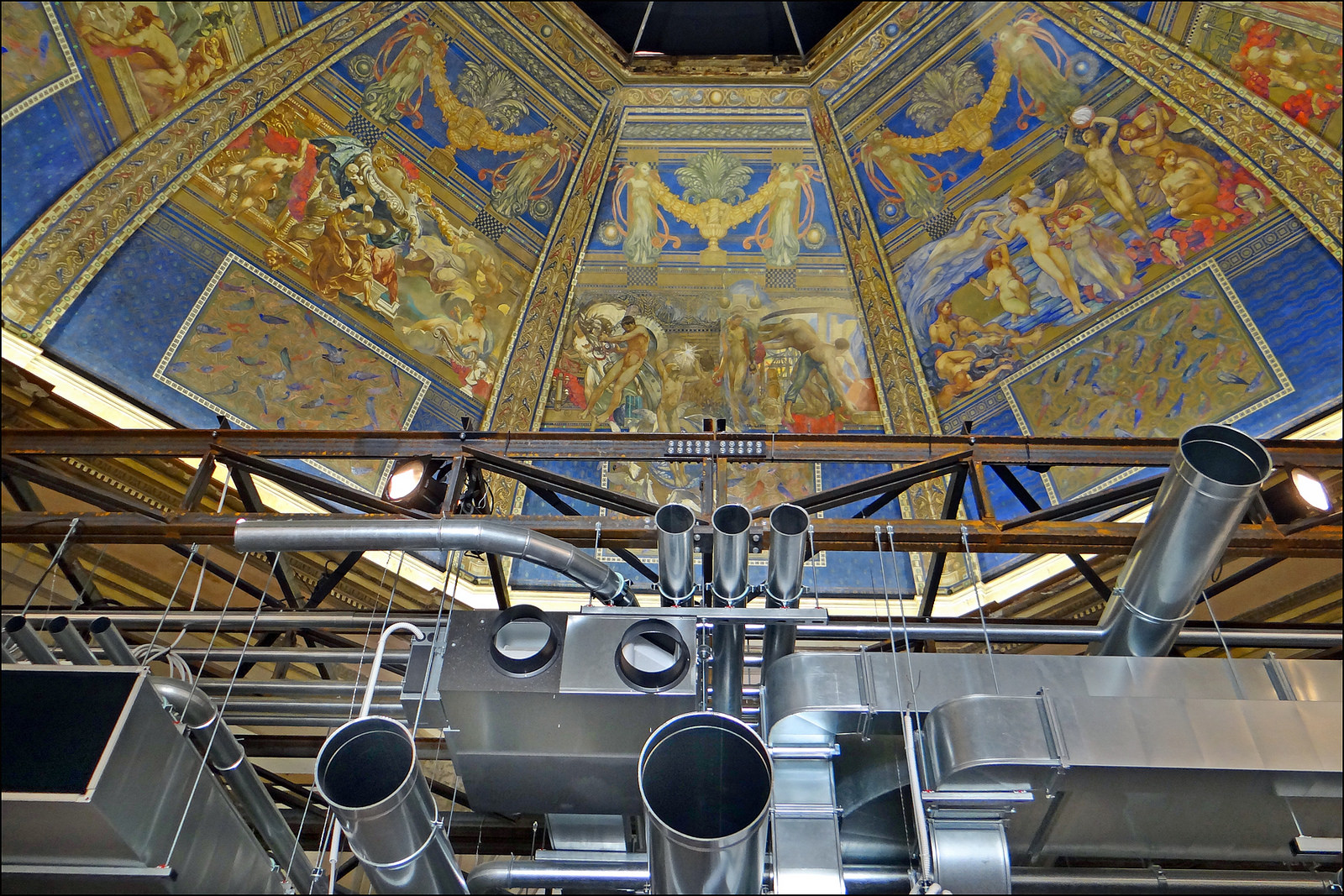 The entrance dome (detail) of the central pavilion of the Giardini in Venice, decorated in 1909 by Chini (1873-1956) for the 8th Biennial Art Nouveau, illustrating the evolution of art. The 'architectural elements' for false ceilings are in the foreground. Credit: dalbera/Flickr, CC BY 2.0

This is the final instalment of three essays on invention and discovery. The other two are here and here.

“The very existence of flamethrowers proves that sometime, somewhere, someone said to themselves, ‘You know, I want to set those people over there on fire, but I’m just not close enough to get the job done.”
–George Carlin

If necessity is the mother of invention, discovery is its father. Behind every invention, innovation and ingenuity have merged with knowledge gleaned from discoveries. But behind monumental discoveries there are inventions (making a hash of my tautology of discovery being the father of invention). Without Tesla’s pioneering work on electricity, there wouldn’t be a viable lightbulb for Edison to brag about. Without invention, you cannot have the discovery, and vice versa, making the separation of research into basic or ‘translational’ meaningless. The best scientists always recognised this, and seamlessly moved between the two. We see that every year during the announcement of the Nobel Prizes, where the winners invariably started with curiosity driven enterprises. These led to discoveries and resulted in (or used) inventions that transformed human lives. Here are three of my favourite stories of world-changing inventions.

The first is Galileo Galilei’s, arguably the greatest scientist ever and always destined for greatness. Galileo was perhaps the first scientists to rely on validation by experimentation to prove a hypothesis. His scientific feats are widely known – from his earliest rebuttals of the prevailing Aristotelian view that larger objects will fall faster than smaller objects, to the design of a superb compass. Galileo was insatiably curious, yet he had a very practical side. While not rich, he was always in need of money. He had two younger sisters to marry off (and for whom he owed large dowries), and had a “useless”artist younger brother who didn’t help with the family expenses. Luckily, he was wonderful at making friends and had influential supporters both in his native Florence (the Medici dukes of Florence and Tuscany) and, more importantly, in Venice, where he had a position at the University at Padua to teach geometry, mathematics and astronomy. His salary was reasonable but insufficient to fulfil his needs.

So with each curiosity-driven endeavour, he tried to invent something that would make him rich and constantly tried to make devices of value for the mercantile republic of Venice (then the richest, most powerful kingdom in Italy). This was the reason why he invented a superb calculator called a ‘compass’, to help gunners fire guns accurately over different distances. This sold well but didn’t give him wealth since it was rather easy to copy. As luck would have it, Galileo had heard a great deal about the brilliant Dutch lens-makers, who were at that time making ingenious devices to magnify objects (as we have seen earlier with microscopes). He had heard of this device to see distant objects, and immediately imagined that it would be of great use to the famous merchant navy of Venice. He started thinking of crafting one to present to the Doge of Venice (hoping for a good payoff).

One day, he heard that a Dutch craftsman was making his way to Venice with the present of such a device for the Doge. In desperation, he devised his own telescope (without having seen the Dutch version) within a day. He did not know that the Dutch telescope could only magnify objects around three fold and had an inverted image because of two convex lenses. In his own telescope, he used one concave and one convex lens, which resulted in an upright image, and his telescope was four times more powerful than the Dutch variant!

He gifted this to the Doge to great success (and a doubling of his university salary). But he also used this to turn his attention to the stars since he had followed Kepler’s work and was deeply interested in the Copernican view of the universe (where Earth and other planets went around the Sun). His telescope was so much better than anything else around at that time that, when he turned his eye to Jupiter, he discovered new moons going around the planet. This was ground-breaking, since the view of the church was that the heavenly objects went around a static Earth (since the Moon orbited Earth as well). But if the moons of Jupiter could go around Jupiter, and Jupiter itself was going around something, it was just as possible for the Earth to not be stationary but be in motion in an orbit. Others studying the Copernican model had postulated that for the model to be true, Venus had to have phases. This, too, Galileo could observe with his telescope.

His reliance on a testable hypothesis and verification by experimentation made him a remarkable scientist. These discoveries, made with his invention of his type of a telescope, transformed our idea of the universe forever. Of course, they also got him into trouble with the Catholic Church and its Inquisition. Galileo’s Two New Sciences, perhaps the first great modern science book, started a revolution in Western Europe but it was banned by the Church in Italy. And so in the birthplace of the Renaissance, the spread of knowledge was stifled, and instead of leading the scientific revolution, Italy remained a scientific backwater.

Two hundred years later, an unlikely inventor would go on to revolutionise the world once more. James Watt was a sickly Scottish kid who wanted to become an instrument-maker. Born to tinker, he loved carpentry and mathematics, and when young went through several apprenticeships (then the way to learn a trade) in London. He returned to Glasgow to set up his independent trade, but couldn’t, because trade was tightly controlled by the different guilds. Luckily, guild rules did not apply within a university and Watt had friends there. They recognised his ingenuity, and created the position of ‘Mathematical Instrument Maker to the University’ for him, allowing him to invent unhindered.

Around this time there was great interest in harnessing steam. The Newcomen perfected the work of several others before him to invent a small boiler that worked in mines to pump water. But his model when scaled to larger sizes needed vast quantities of water to work, and stalled after a few strokes. Watt was a careful experimentalist, and an excellent engineer with a superb understanding of mathematics and physics. He realised that he had to condense steam without allowing it to cool too quickly. If he used a separate condenser to evacuate the steam cylinder while it was still boiling, he could make it work. But an invention left unnoticed might just fade into obscurity.

Luckily, Watt’s friends at the university introduced him to several industrialists and miners who were greatly intrigued by the device. His meeting with the industrialist Matthew Boulton made for the transformative moment. Boulton was a dreamer (often dreaming of a place where all kinds of workers would work together, in a “manufactory”) who realised that the steam engine could be used for more than mining, and eventually the Boulton-Watt engine was born. They realised that steam could be used for ‘rotating motion’, and invented a system to rotate wheels. The first sawmill used Watt’s engine to replace twelve horses (and Watt ingeniously coined the word ‘horsepower’), and there was no looking back. Watt became rich, and the railways, mills and the subsequent industrial revolution changed the world for ever.

And then, around two hundred later, a supremely unlikely suspect came up with the most transformative invention of the 20th century. Like Watt, Kary Mullis appears to have been a born tinkerer, experimenting with home chemistry even as a kid. He meandered through his PhD in the late 70s and somehow became fascinated by DNA, working for a company where he chemically synthesised the molecule. One day, while out in the woods with his girlfriend, Mullis had his moment of inspiration. He realised that if he put small pieces of DNA, which could pair at opposite ends of a long, double strand of DNA because of the unique property of the molecule to recognise and pair-up with opposite sequences, and then added single bits of DNA (nucleotides) and a protein (enzyme) to extend these small fragments, he might be able to duplicate the DNA – or make as much of it as he wanted.

Mullis could connect distant dots: such as that the by-then established fact that DNA was double-stranded with each strand being ‘complementary’ to the other; that a specific enzyme (DNA polymerase) would perfectly copy DNA; among others. He also intuited that the power to amplify and make more DNA would require a polymerase that was stable when heated in order to do this over cycles. Serendipitously, in the 1960s and 1970s, scientists had discovered microbes that lived in thermal vents in the Yellowstone National Park, in entirely curiosity-driven exercises with no obvious practical use. Yet now, Mullis and others could use the DNA polymerase from these microbes since it would work at high temperatures. He invented the polymerase chain reaction (PCR), the ultimate DNA Xerox machine, and by doing so enabled scientists everywhere to perfectly copy DNA and enabled the molecular biology revolution.

This invention, now taken for granted, has enabled with cloning and the sequencing of human and other genomes, with identifying new genes, genetic engineering and is used everywhere from forensics to paleontology. Modern biology as we know it would not be possible without PCR. And, as we’ve seen, the greatest inventions happened within ecosystems of discovery and the freedom to pursue curiosity. Places that foster conditions to drive innovation, enterprise, and curiosity driven-research will continue to thrive, and incubate the inventors and discoverers of the future.

Sunil Laxman is a scientist at the Institute for Stem Cell Biology and Regenerative Medicine, where his research group studies how cells function and communicate with each other. He has a keen interest in the history and process of science, and how science influences society.